I was sitting back watching the latest Formula One Grand Prix recently, and despite being a seasoned motorsport fan, I am still astounded at how much of a well-oiled machine the F1 circus is.  Pitstops that happen quicker than you sneeze, and today’s level of safety is certainly something to be proud of.  I thought to myself ‘I bet none of these drivers get in their cars wondering if they will ever return to their pit garage’. 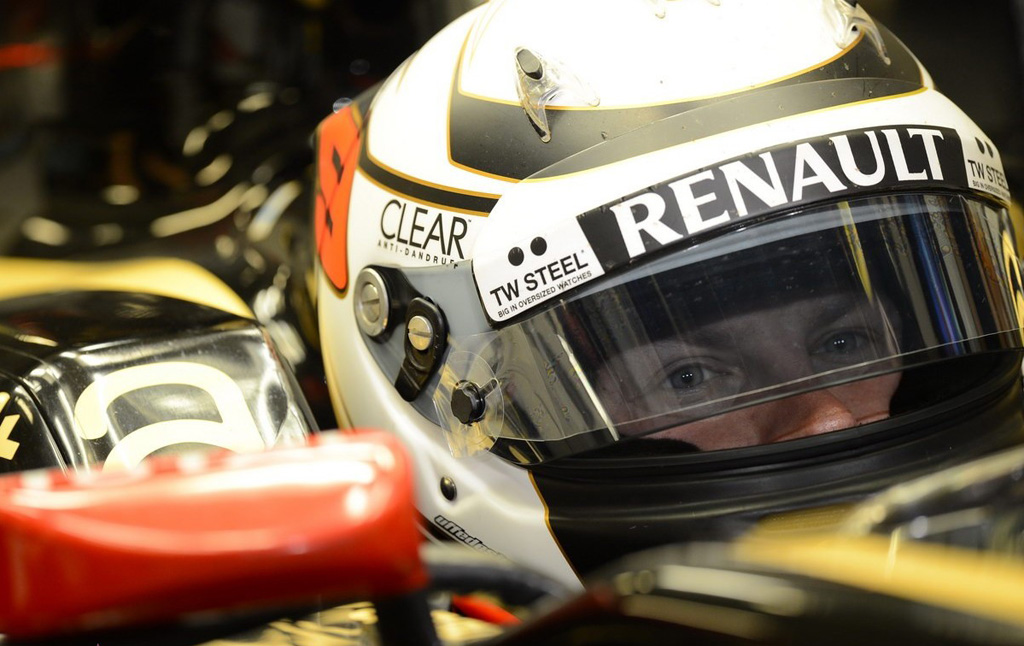 It reminded me of someone I was lucky to meet a while back who did think ‘what if I don’t come back’ every time he climbed into his racecar. It’s not that he was scared of speed, it’s just that he raced in a time when Formula One really was ‘finding it’s feet’ – the 1950’s. I shall bring you that particular interview in another post, it certainly opened my eyes to racing. 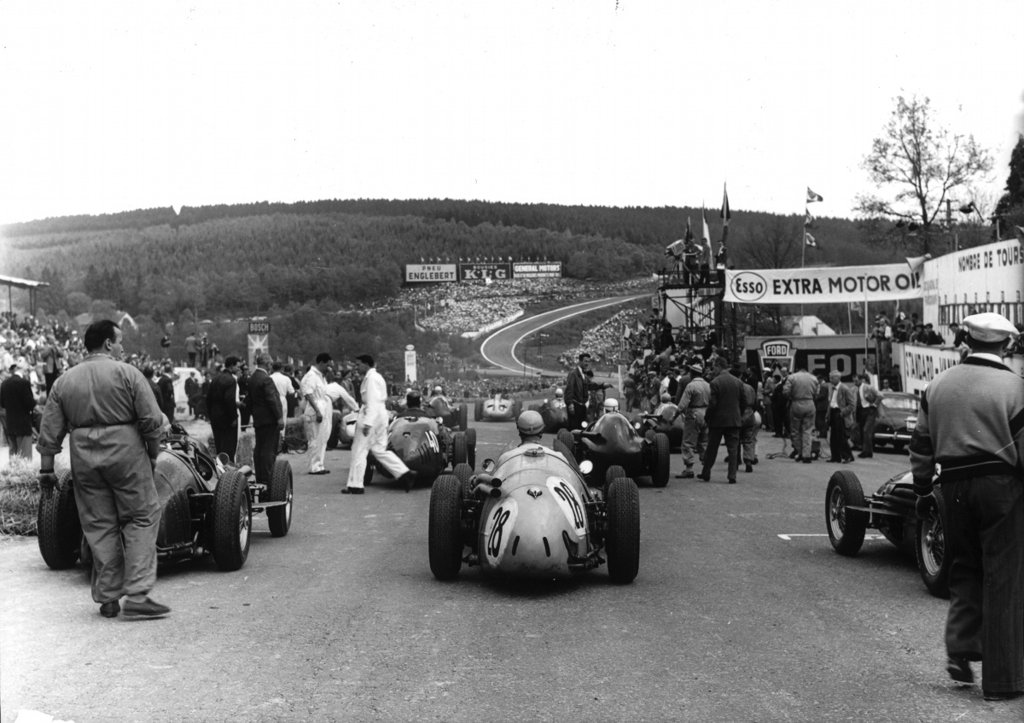 It just takes a photo like this to make you realise how far our 2013 Grand Prix championship has come since this photo of the 1955 Belgian Grand Prix.  It got me thinking of just how many things have changed since the ’50s.  It was a time when F1 was new and they were re-writing the rule books almost everytime a GP took place. 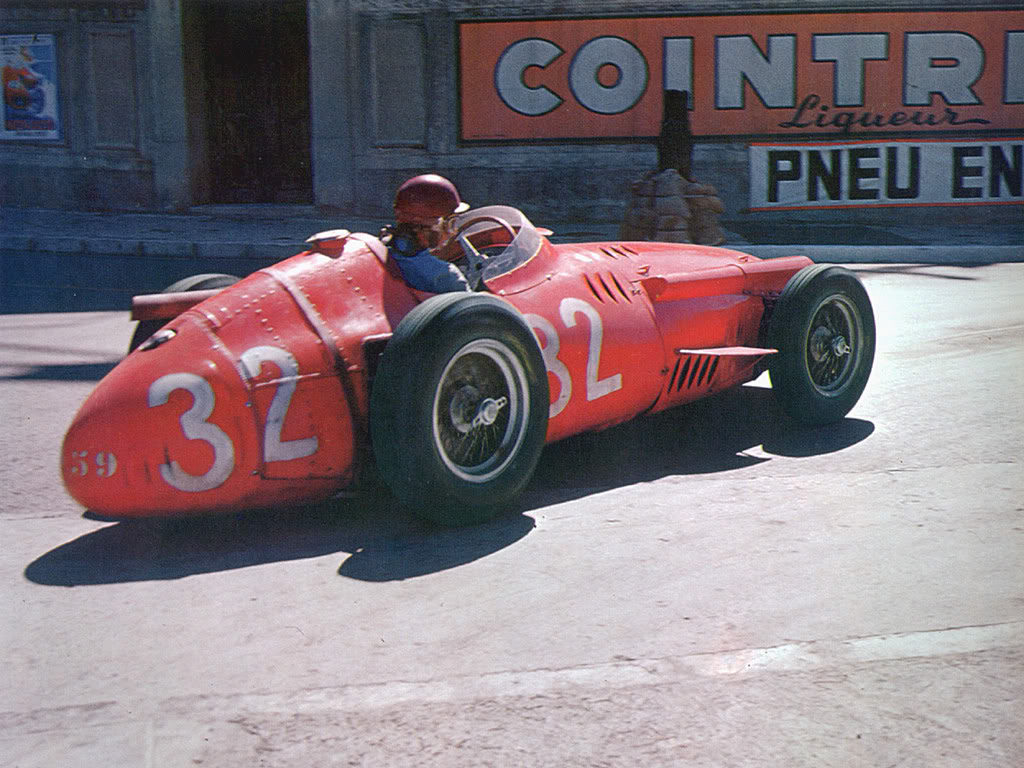 Fangio here at Monaco didn’t jump into his shiny, immaculately presented race car, one thing about this era was for sure though… 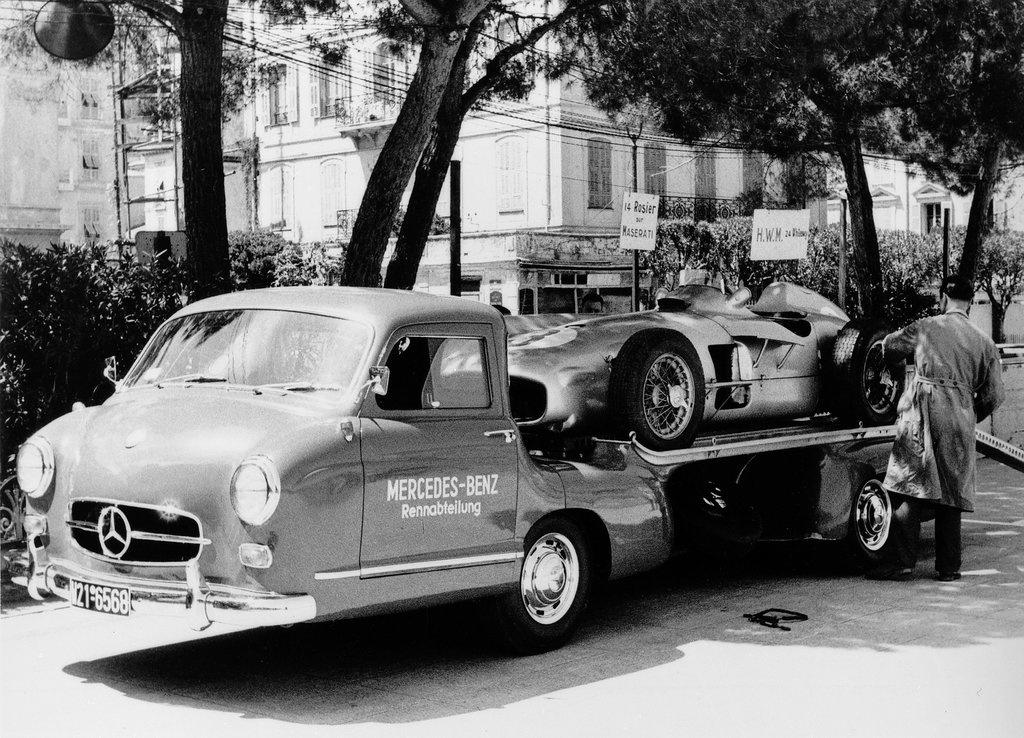 Never have race cars been so beautiful.  Even the transporters were as classy as you could get! 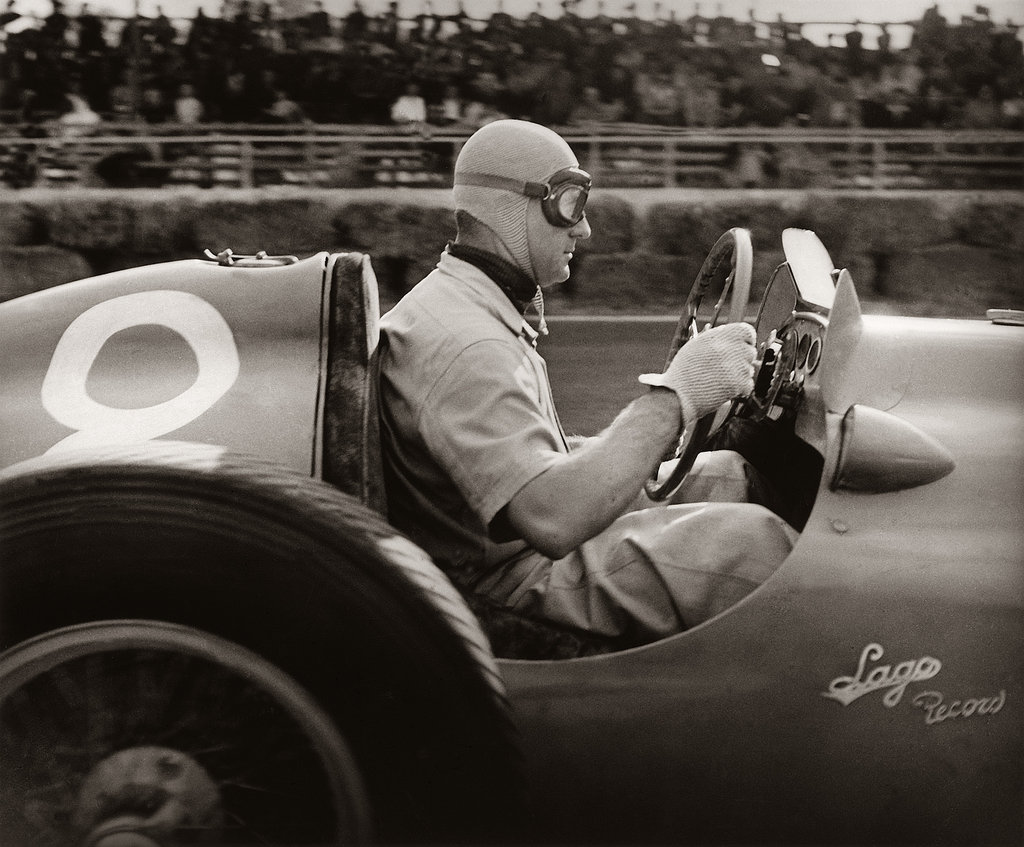 Despite the glamour that Formula One had by the bucketload, these men often raced in their  Sunday best.  A pair of trousers, a nice shirt, a woollen hat and some gloves were all you needed to go racing.  Louis Rosier here in 1951 is a stark contrast to that of Sebastien Vettel in 2013! 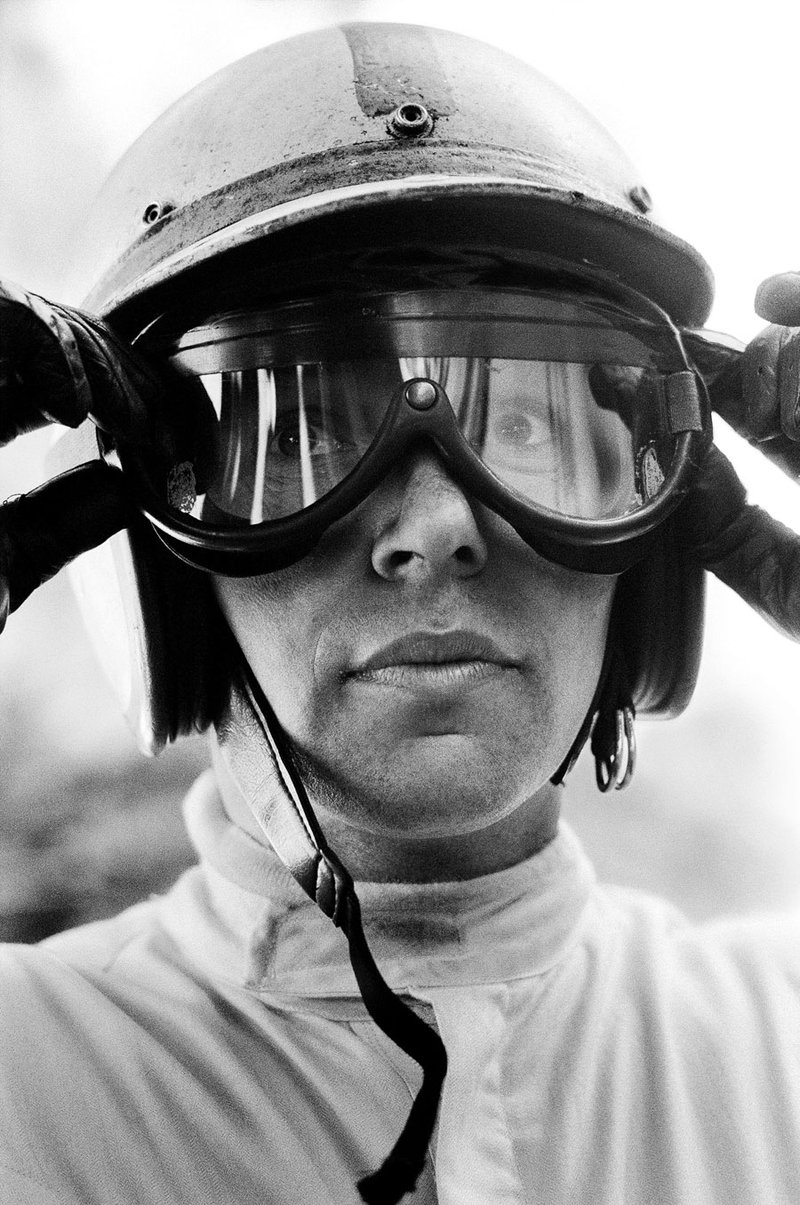 One big step forward came in 1953 when crash helmets became compulsory.  It’s difficult to imagine woollen hats and goggles were allowed considering the cars were already getting up to 180mph (289kmph) by this time. 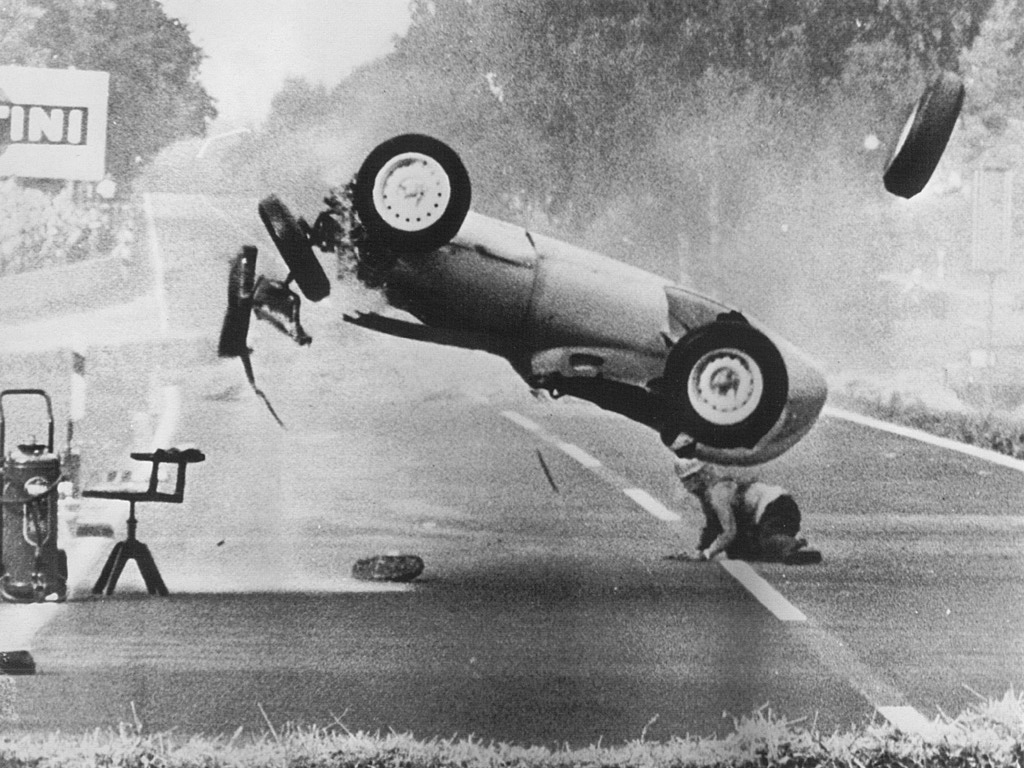 Even crazier still was that the drivers were not belted into their cars.  The steering wheels were nice and big so they had something to hold onto while cornering.  The ’50s were an era where you really could ‘sit’ (or slide along the racetrack) and actually watch your own accident happen.  Even when seatbelts were introduced in the late 1960s many drivers stated they preferred to be thrown clear rather than trapped in a burning wreck.  Hans Herrmann here in 1959 shows exactly why many drivers didn’t want to be strapped in. 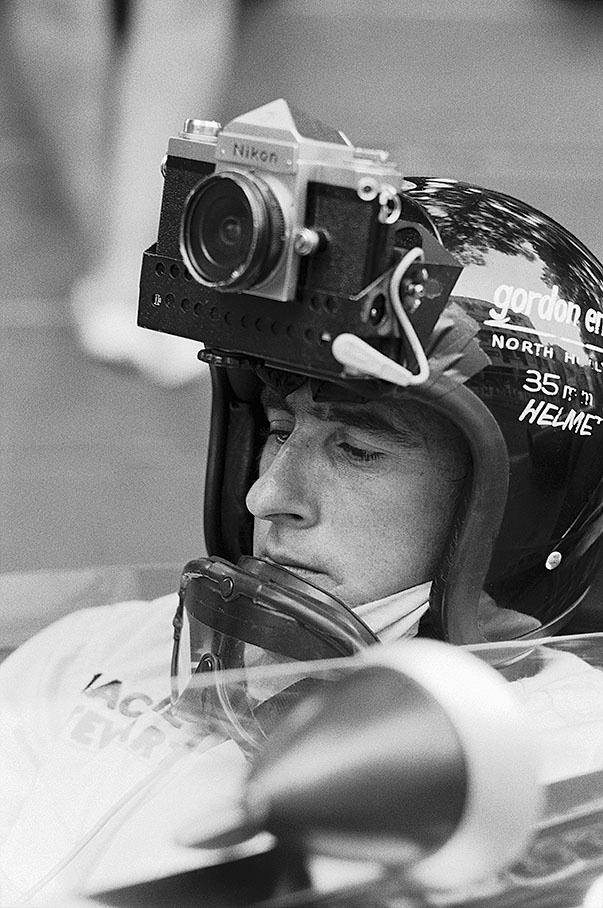 The ‘GoPro 35mm helmet’ has believe it or not has been around since 1966 too, Jackie Stewart pioneering this technology… 😉 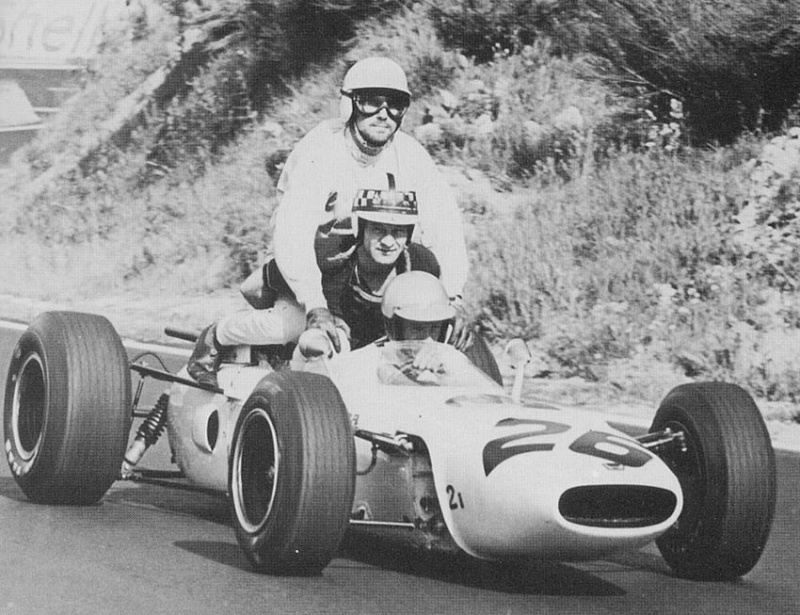 No you aren’t seeing a F1 bobsled, and there isn’t any dirty tactics happening here.  Here retired Richie Ginter and Innes Ireland hitch a ride back to the pits atop Joakim Bonnier’s Honda RA273.  Could you imagine Lewis and Kimi jumping onto Sebastien Vettel’s RedBull car for a quick skid back to the pit garages at the end of the race? 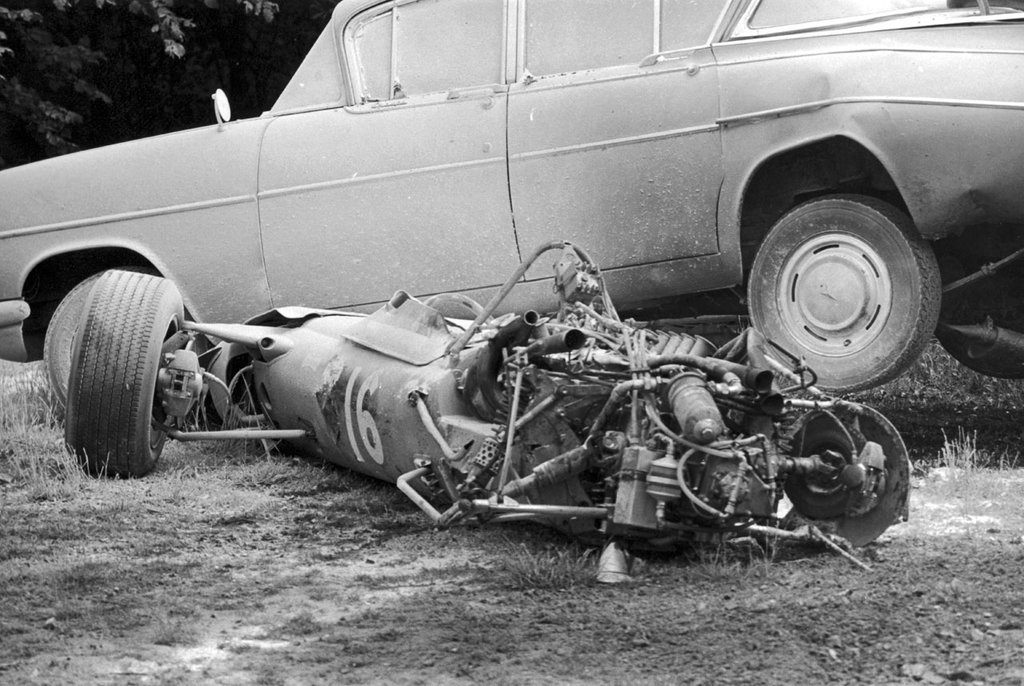 The tracks were certainly improving by 1966, although a lack of safety fencing and armco barriers meant that cars often cartwheeled off the track and ended up where spectators were sitting.  This Cooper T86 driven by Brian Redman ended up in the carpark at the Belgian GP.  I bet the owner wasn’t very happy to see a F1 car wedged underneath his own car. 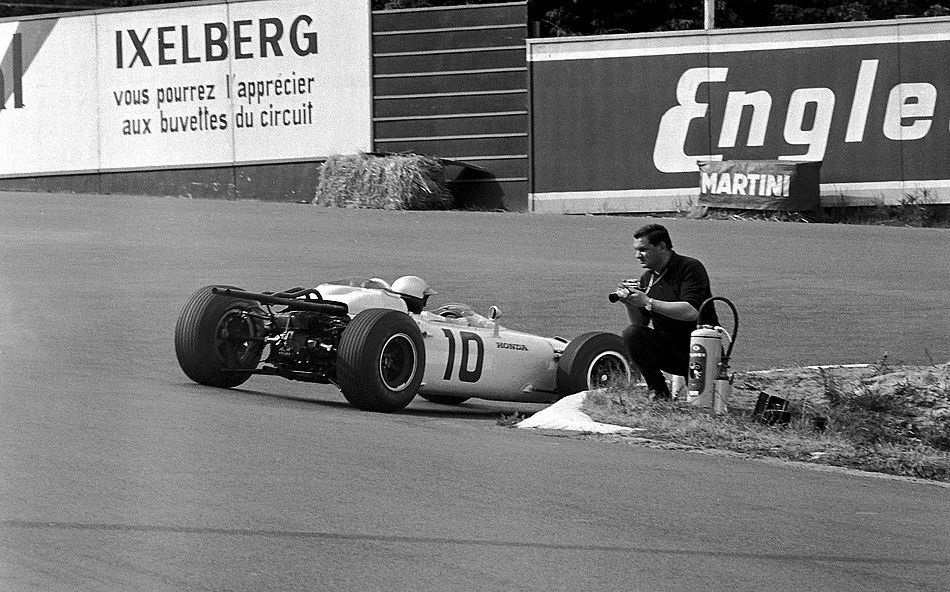 No need for photographers to stand behind any safety netting too, just perch yourself on the edge of the race track.  Despite being incredibly dangerous there were some amazing photos taken by these brave souls of the pioneers of F1 racing.  Nowadays we look back and think ‘that was insane’ but it was all perfectly normal then. 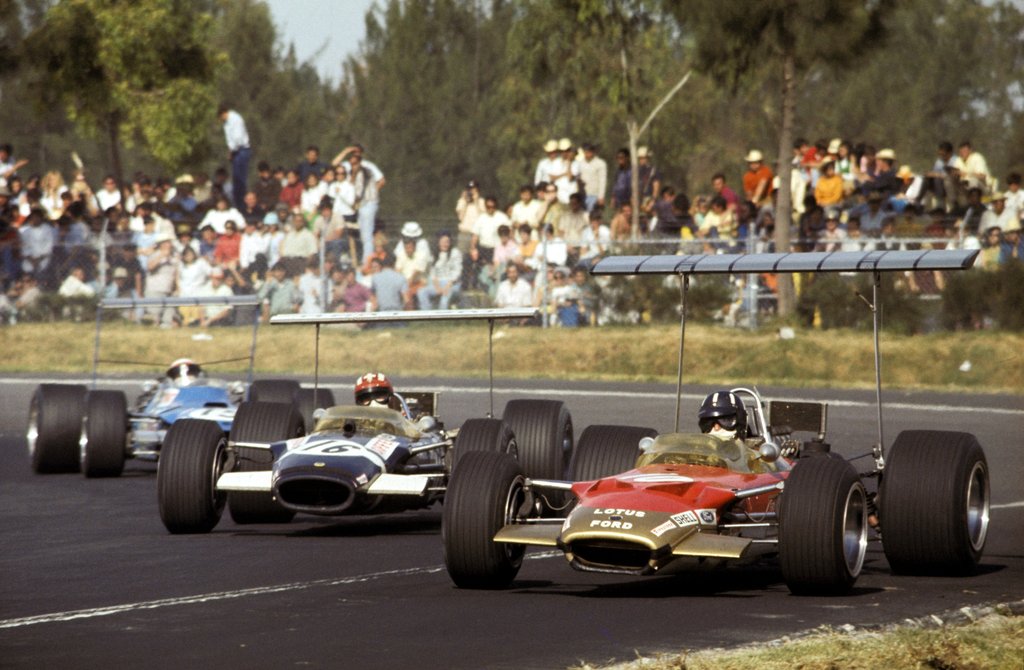 No matter which way you look at it though the ’50s and ’60s produced some of the most aesthetically gorgeous race machines and iconic liveries ever seen in motorsport.  This shot of Jackie Stewart, Jo Siffert, and Graham Hill in the 1968 Mexico GP is just pure class.  It was also the first time anyone experimented with ‘aero’ parts. 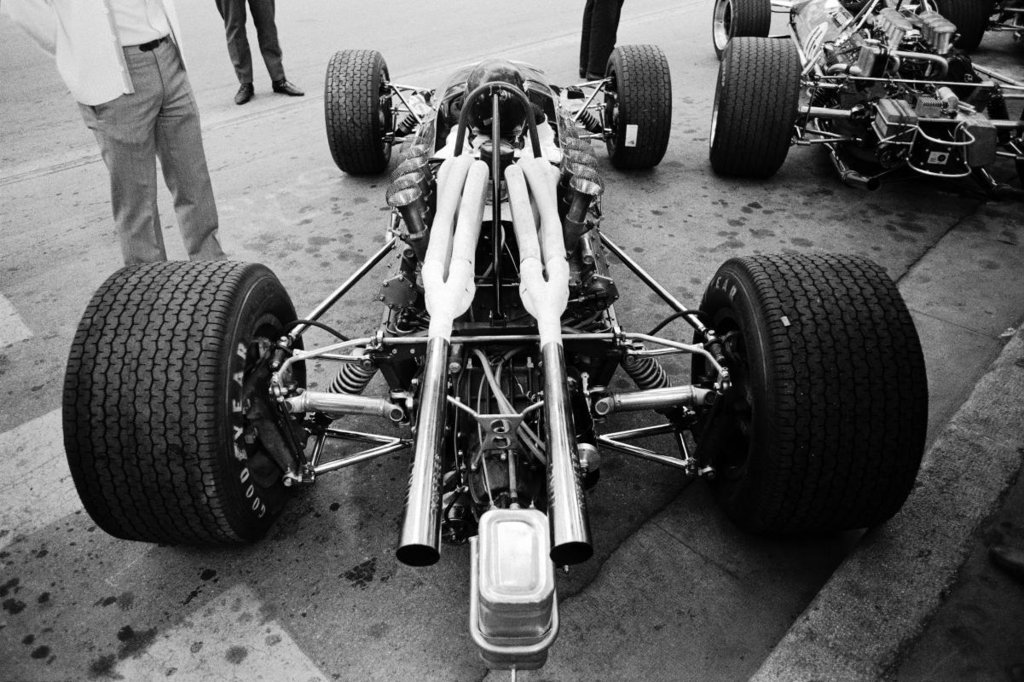 Nowadays the cars are forced onto the tracks courtesy of massive downforce, although this Brabham Bt24 Repco was 100% pure mechanical grip, which meant… 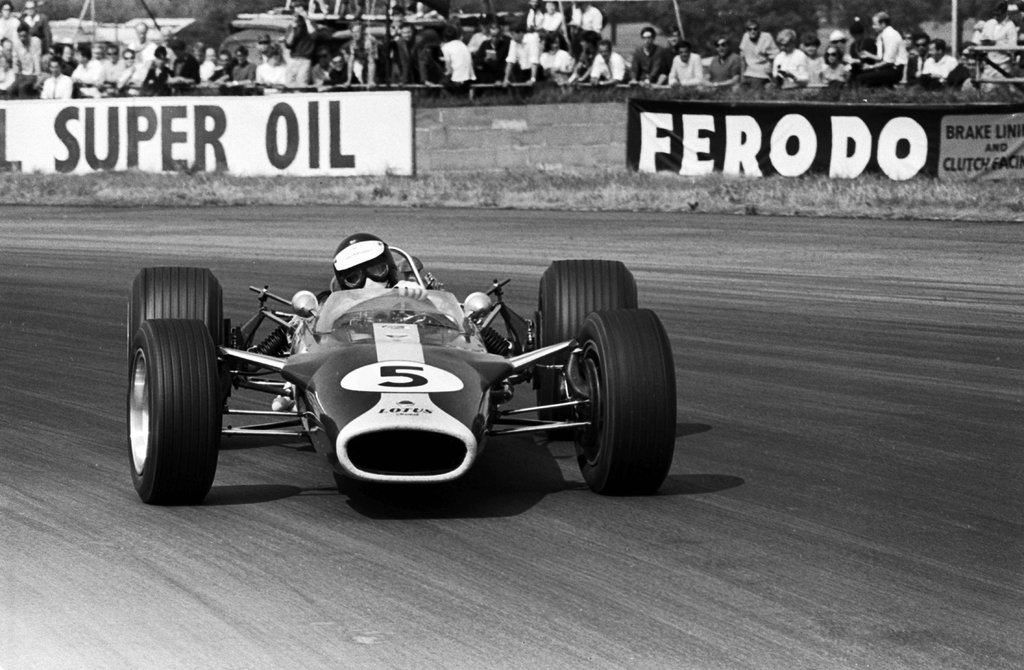 It wasn’t uncommon for the GP drivers to be a dab hand at a spot of drifting, jolly good show! 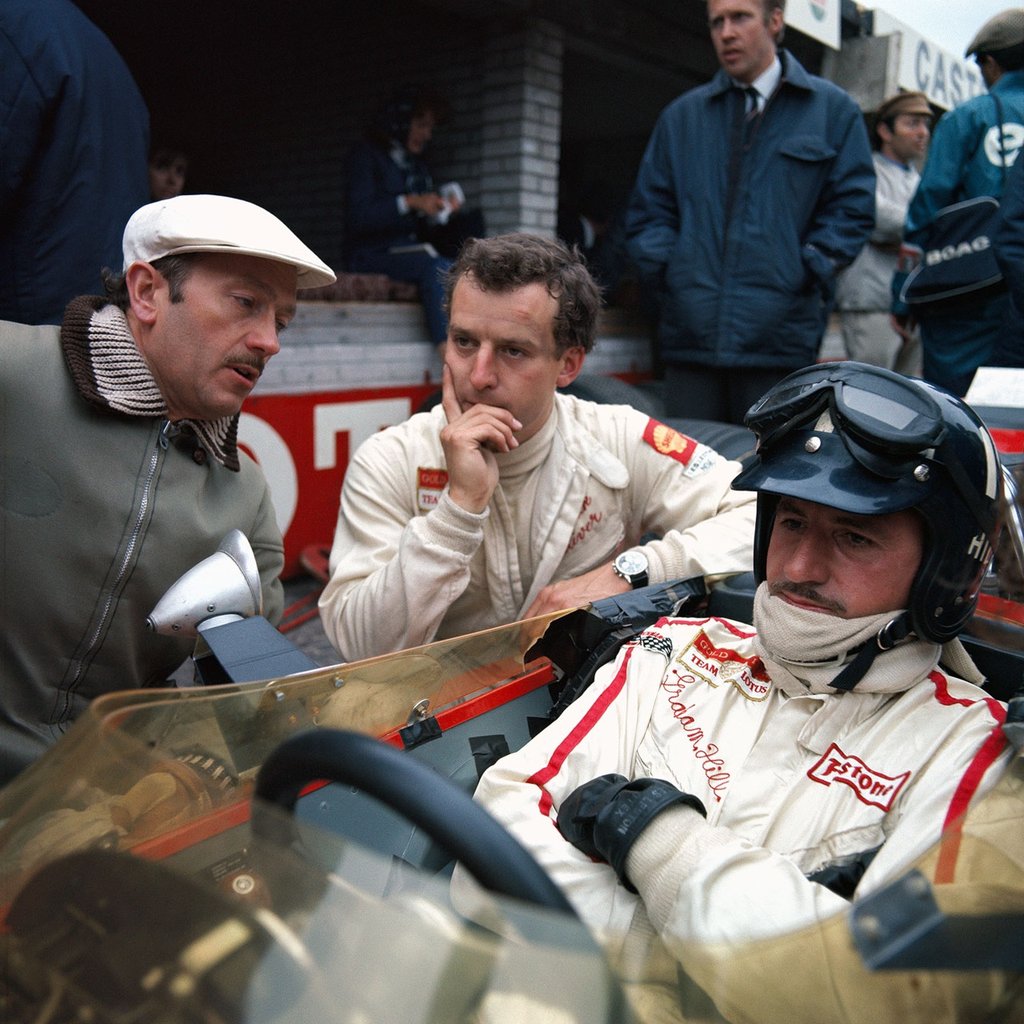 These are drivers whose names hold legendary status among fans, 2-time World Champion Graham Hill here seen before the start of the 1968 Netherlands GP is one of those names that shall be well known for many decades to come. 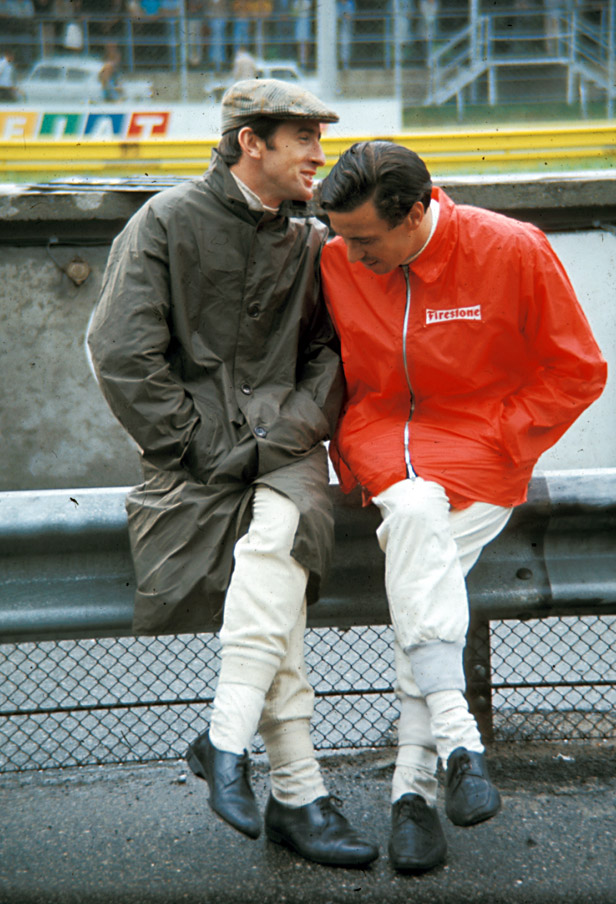 Believe it or not but F1 used to be a sport of gentleman too, here Jackie Stewart and Jim Clark chat away before the start of the 1967 Italian GP.  Good luck even finding team mates being civilised nowadays. Can you imagine F1 without all the handbag swinging between drivers?  Well here you go, in 1967 the F1 drivers all had their Grand Prix Drivers Association (GPDA) meeting in South Africa.  Looks pretty civil and laid back… In the 60’s it’s amazing to think that some drivers were building their own F1 machines and racing them.  Those familiar with the ‘McLaren’ team might  know Bruce McLaren was 28 when he was building his own F1 cars. 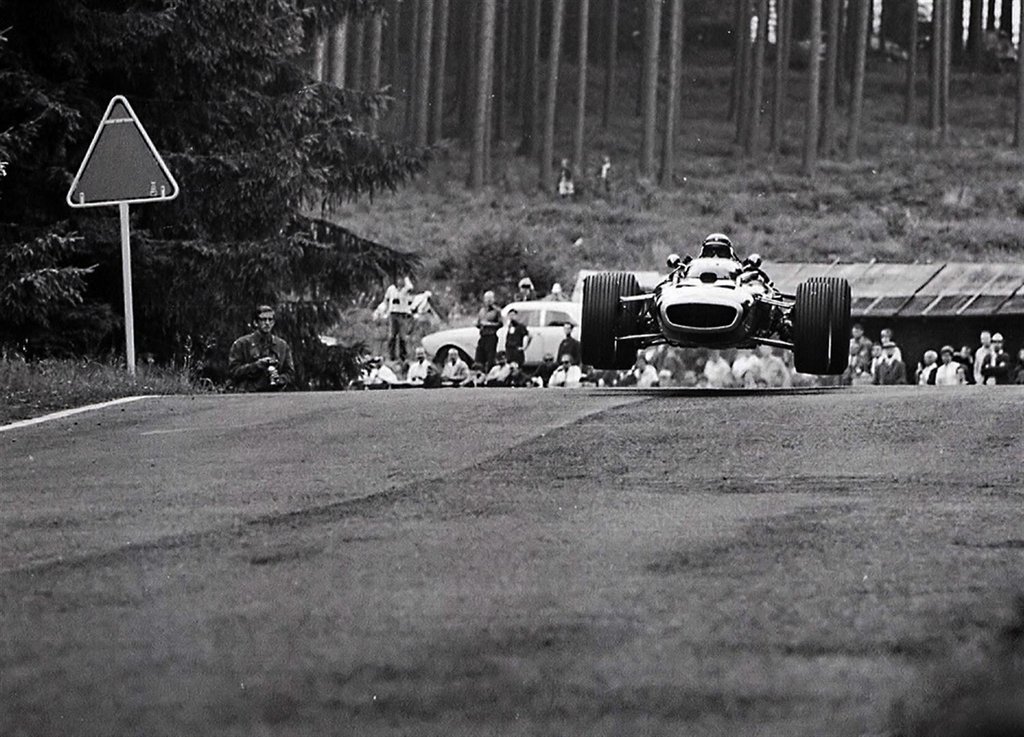 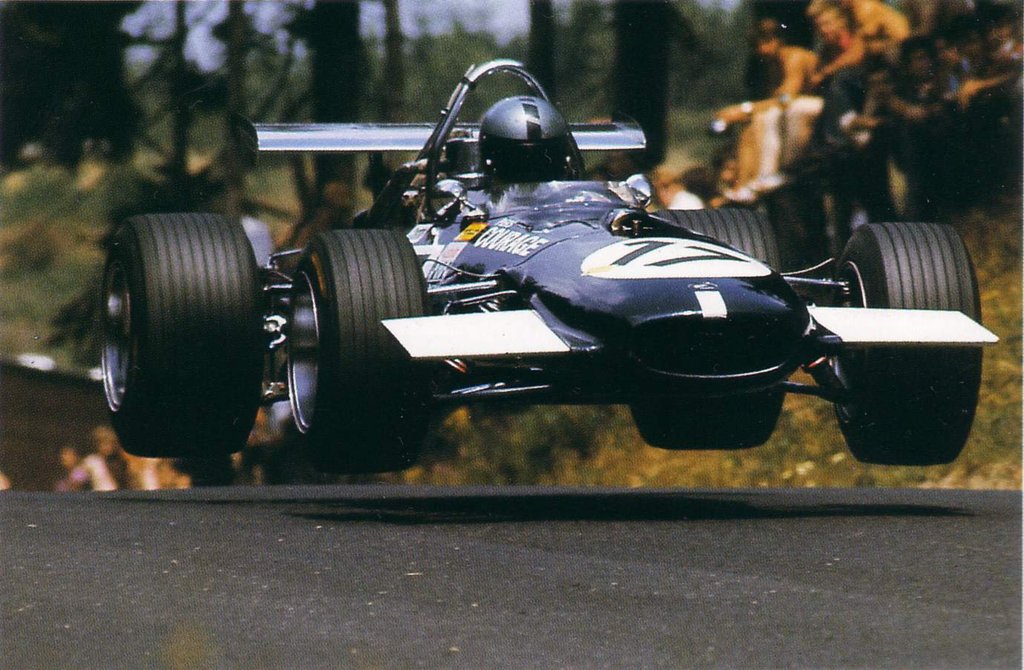 and Piers Courage, well almost anyone who was brave enough to drive at ‘The Green Hell’ also known as the Nürburgring.  Airborne in 5th gear was not for the faint hearted.  F1 was spectacular but very very deadly and it was this danger that inspired legendary drivers, and kept the fans coming back to watch. 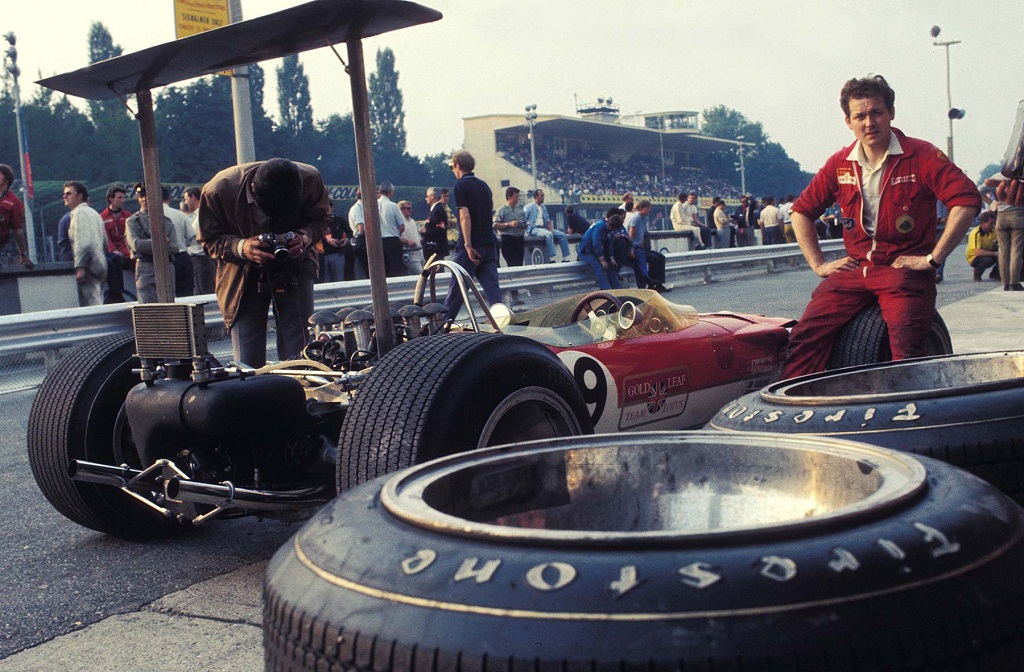 This period of 20 years of F1 from 1950-1970 was magical, inspirational, classy, and also deadly.  Looking at photos like the above just left my mouth hanging wide open at times as only in our wildest dreams would you ever witness scenes like the above today.  Three-time World Champion Jackie Stewart fought tooth and nail to get improved safety introduced into F1 which ultimately ended up saving other drivers lives.  ‘I would have been a much more popular World Champion if I had always said what people wanted to hear. I might have been dead, but definitely more popular.’

This man through his 8 active years in Formula One lost a total of 57 friends and colleagues to the sport, so in 1973 he retired stating he felt he had been one of the lucky ones.  Seeing photos like these just makes me appreciate the modern F1 even more than I did.  It certainly has earned the right to say it has properly ‘found its footing’.