Ah, late August. Generally speaking, the hottest time of the year for the US. So what better way to spend that time then to drive for almost 10 hours down to the middle of a notoriously hot desert? Count us in! 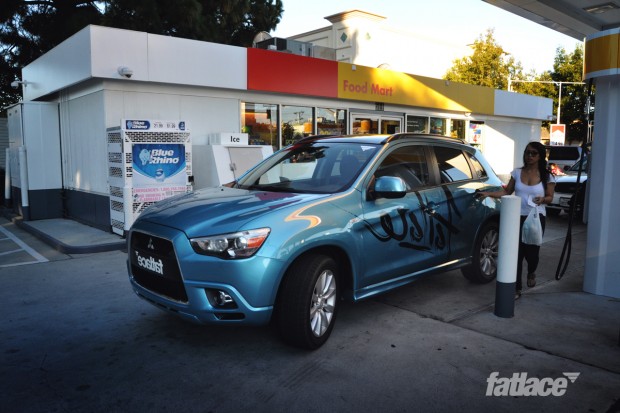 This gave us an opportunity to break in our new Mitsubishi, sporting its fresh vinyl, for it’s first true long-distance trip. Despite the surprisingly good mileage for an AWD SUV, there were a fair number of gas stops. Hey, if you’re gonna drive almost 1,200 miles, you’re gonna use plenty of gas. 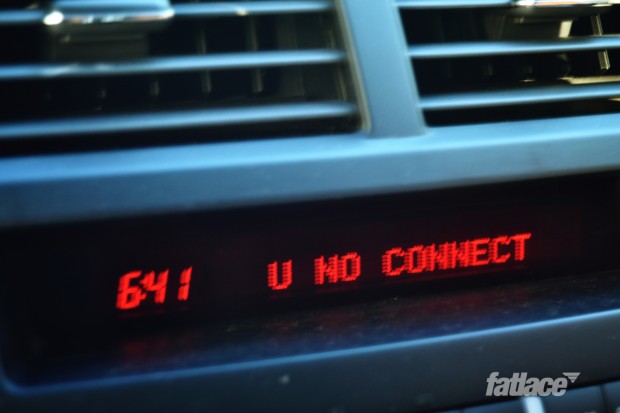 This gave us the opportunity to get really comfortable with the Outlander Sport and learn all the little things about it. For an example, apparently the radio is rather impatient about hooking up your iPhone or iPod to the USB port. 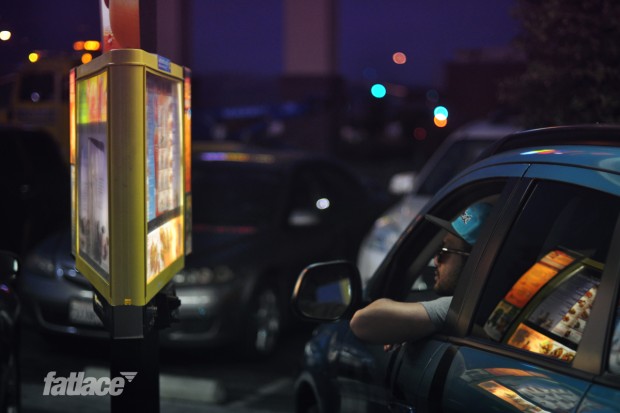 Of course, the car wasn’t the only thing that needed fueling up. As we left right after work on Friday afternoon near 7 PM, we had to grab some dinner for the long drive ahead. Sonic slushies anyone? 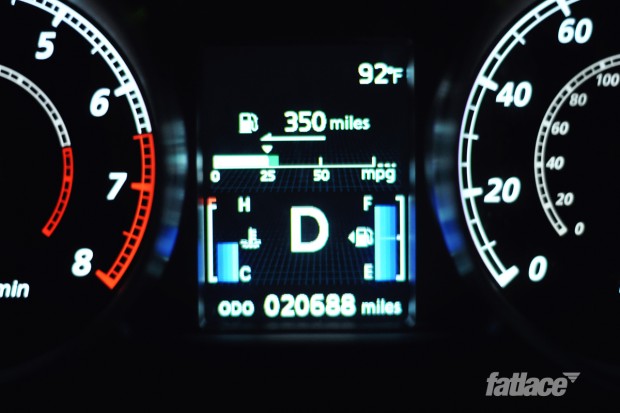 After several hours driving, there were a few subtle signs letting us know we were getting closer. As the clock hit 2 AM, we took a quick glance at the outside temperature. Over 90 degrees in the middle of the night? Yup, we’re getting close. We eventually arrived at 4 AM, checked into our room and passed out. 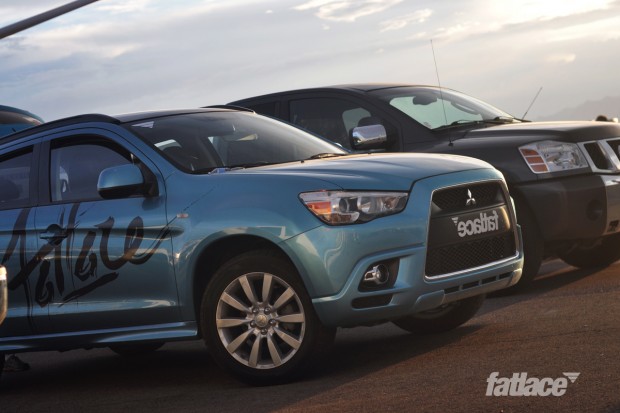 The next day we drove out to the track where we were greeted by the oven-like heat we had been expecting. The temperatures hit near 110 degrees, though standing over the black asphalt, it wouldn’t be surprising if the real temperatures were even higher. Unfortunately, our poor iPad that we used to check in entries for our Slammed Society Showcase couldn’t handle the heat, so we used the Outlander Sport’s great AC to keep the iPad cool down, as well as ourselves! 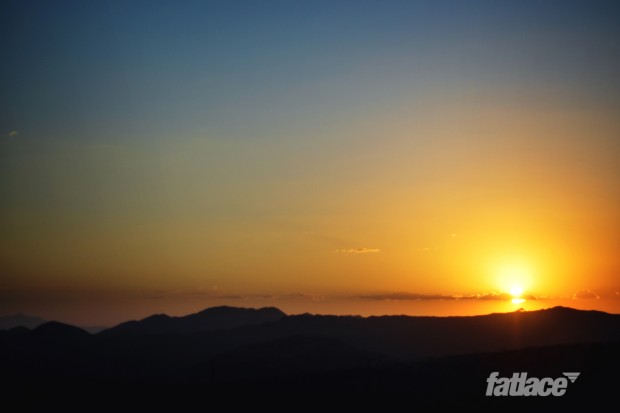 The following day, after spending a few hours on the strip and a little time at the pool, we took off to head home. 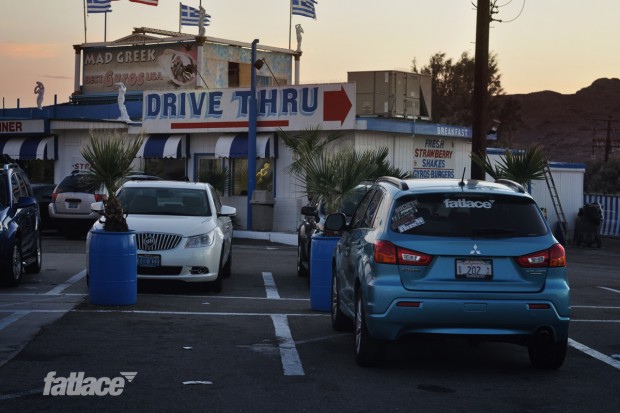 The destination for our dinner on the way back was the Mad Greek Diner, which had some pretty darn good falafels. 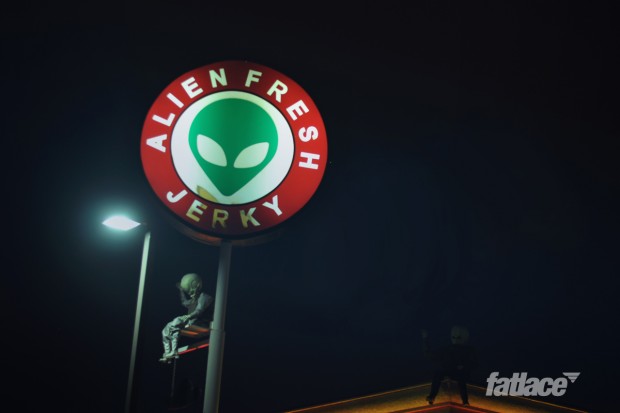 As it was just down the road, we couldn’t help to take a quick visit to the Alien Fresh Jerky store. What’s a road trip without the occasional tourist traps? Besides, their jerky was pretty good. 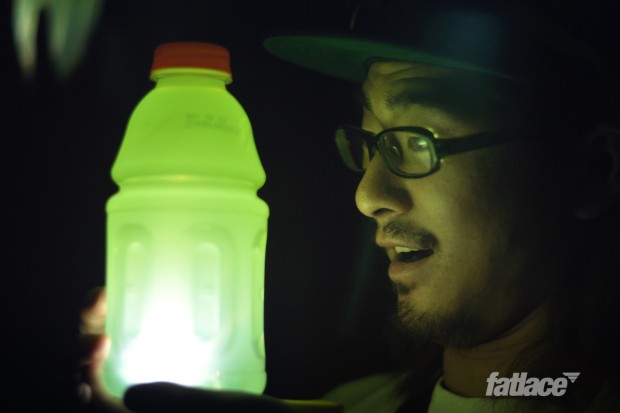 Their jerky wasn’t the only thing that had an outer-space theme to it! 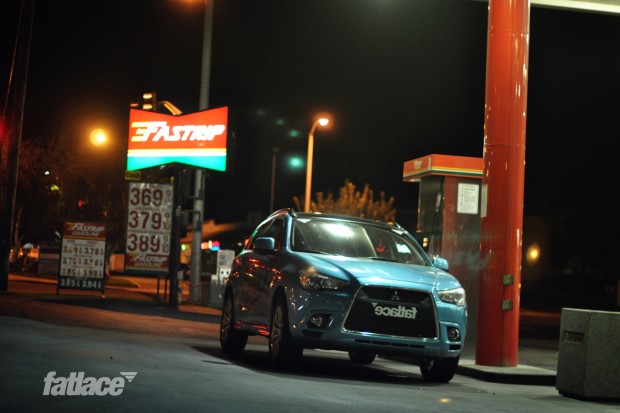 Our last gas stop. Even though we averaged 25 mpg, we’ll miss the low gas prices. Despite it’s small size though, the Outlander Sport was surprisingly roomy for 4 people and their luggage. The seats were sufficiently comfortable and didn’t give us any aches after the long stretches of driving. Next time it’ll see Vegas should be SEMA. Hopefully we’ll have it spiced up a bit before then.