There comes a time in an individual’s life when everything falls into place, generally this happens later in life. We go from “I want to be a racecar driver when I grow up,” to the reality of working in a cubicle. Occasionally, there’s the child that has this dream, and grows up to a reality that meets and exceeds that of a racecar driver. Bruce Canepa is that rare child that not only dreamed of those things as a child, but exceeded expectations with it. Not only does he head Canepa Design, but he continues to race as well.

While Scotts Valley is beautifully placed with a surrounding of lush trees and mountainous range, it also houses the unexpected Canepa Design.  Upon entering Canepa Design, one will notice that this is not your average garage, for they specialize in rare types of cars. Restoration can range from simple maintenance to a full rebuild, but Canepa Design is just as unique of a business as the cars they house and work on.

The most notable of all the cars is the 1921 Duesenberg, the first ever built by the brothers. The Duesenberg was purchased by Mr. Castle of Castle and Cook Foods. Mr. Castle is 7-feet tall, so the car had to be customized for him to fit. Currently, the Duesenberg is being restored from the ground up to its original design. While they house many original Cobras, the most noteworthy example the last 1967 427 Cobra built by A.C. Cars. Although the vehicle’s history is extensive, when Bruce obtained the vehicle in August 2010, it only had 6,000 miles on it.  The Canepa team was then able to restore it 100%, nut and bolt while keeping the components original. The Cobra houses a 410 hp, 7-liter V8 and had a top speed of 165 mph. It goes 0-60 in 4.2 seconds and 0-100 in 12 seconds. 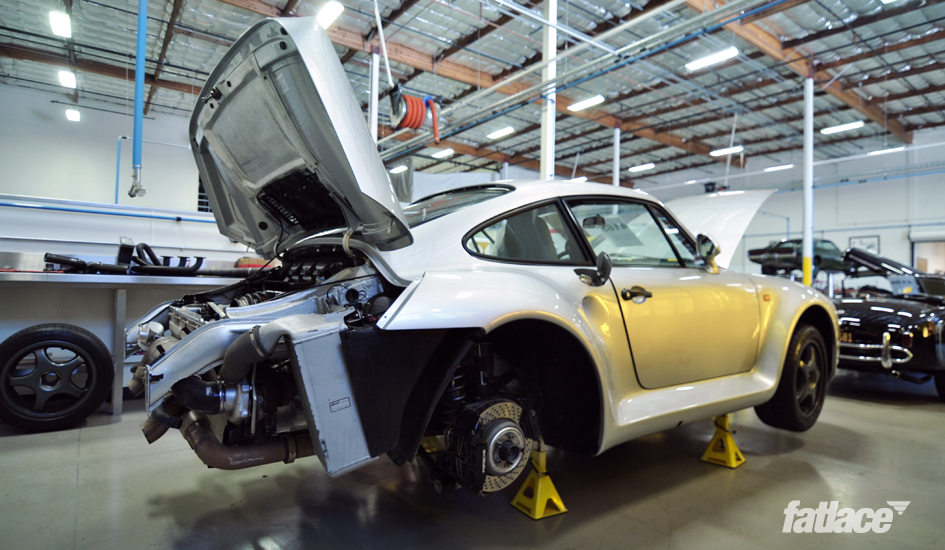 As if the cars being worked on weren’t rare enough, the two showroom floors hosts many more cars, many of them race cars. There is a 1969 917 Porsche, twin-turbo 5.0-liter 12 cylinder that has 630 horsepower and a top speed of 220 mph. The 1969 917 Porsche won the 1970 Daytona 24 Hours and 1971 Interserie Championship, (A European-based motor-sports series that allowed for various racing cars to compete with less limited rules). All of the vehicles have unique stories behind them, but the most distinguished story is that of the 959 Porsche. Canepa Design had an influential role in passing “show and display” legislation, allowing the 959 Porsche to be legal to drive in the U.S. There are only 226 of these rare vehicles made by Porsche and in 1988 Bruce was lucky enough to purchase one. Bill Gates and Jerry Seinfield are 959 owners as well.

Canepa Design does modifications on semi-trucks, and used to modify SUVs.

The only thing more interesting than the cars inside Canepa Design, is the man himself Bruce Canepa. “Once he got behind the wheel of a Porsche, he knew how driving should be,” said Canepa Design employee Kristen Chidester on Bruce.

“By the time I was four years old, I knew what I wanted to do and it has never changed,” said Bruce.  He is no stranger to the area, being born and raised in Santa Cruz, CA and credits many influences in his life for him to pursue this career, mainly his father, other inspiring people in his life include, Dan Gurney, Robert Penske, Kent Fuller, and the list continues. Bruce can be considered a collector, from saving his artworks growing up, to his extensive collection of car magazines and to the vehicles that are contained inside Canepa Design.  “He [Bruce] has been drawing all his life. He is really an artist, colors are important to him,” said Kristen. This is evident from the drawings Bruce does to the details on every vehicle they work on.

When Bruce started Canepa Design in 1981, it was a start-up of all of his own ideas, “I knew what I wanted to do as a business and wanted to try it. It was an evolution of what I have been doing all of my life. Prior to creating a business, I was working to understand all the disciplines related to the automobile,” said Bruce. He has come a long way from his first job of washing and detailing cars at his father’s Lincoln Mercury dealership. But still after all he has accomplished so far he remains a dreamer. When asked what his dream car was, Bruce replied with, “I never stop dreaming, so it keeps changing.”  Perhaps this never stop dreaming attitude is what leads to Bruce’s vision for Canepa Design in the future, “My long term goals for Canepa Design are to continue to improve our workmanship, quality and customer relations everyday. And to continue to meet new customers and make new friends while enjoying the car world,” said Bruce.  Aside from being a dreamer, collector, and driver Bruce shares and sets a very enthusiastic and positive philosophy for Canepa Design and life that can be intertwined together.  When it comes to Bruce’s philosophy for Canepa Design, he said, “Only that we do our absolute best every day-there are no compromises!” This philosophy could be a result of Bruce’s outlook on life of “Do it 110%, or don’t do it at all.”

If Bruce were not doing the things he does for and at Canepa Design, he would still be doing something design related, “I would be doing some form of design and build; such as custom homes, contemporary buildings, etc.” And if he was to retire he’d still be working on cars, “ The only difference between what I am doing now and retiring is that I would lock the front door and work on my own cars.”

At the heart of Canepa Design past the grime and aesthetics, is an owner, who is a true dreamer and visionary.