Words and Photos by Jon Chow

Formula D is such an interesting series. Each stop along the way has its own atmosphere and vibe. Going from one event to the next never gets boring. I have been to Irwindale, Long Beach, and Vegas several times and each event feels unique, but I always felt that had to do with their locations. Long Beach is held on the city’s streets, Vegas has the strip nearby, and Irwindale is in the heart of SoCal and the season closer. Irwindale also has the nickname of House of Drift and has hosted D1 in the past so you know to expect big things from there. But Monroe, Washington? Where the heck is that? 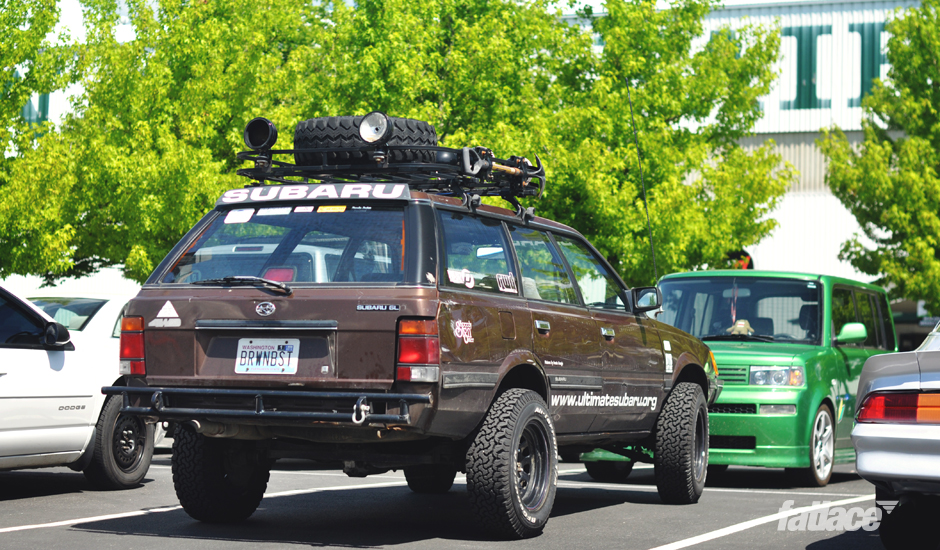 If you check out the map, you’d think Monroe is out in the boonies. Truthfully, there were a few subtle indications that supported this theory… 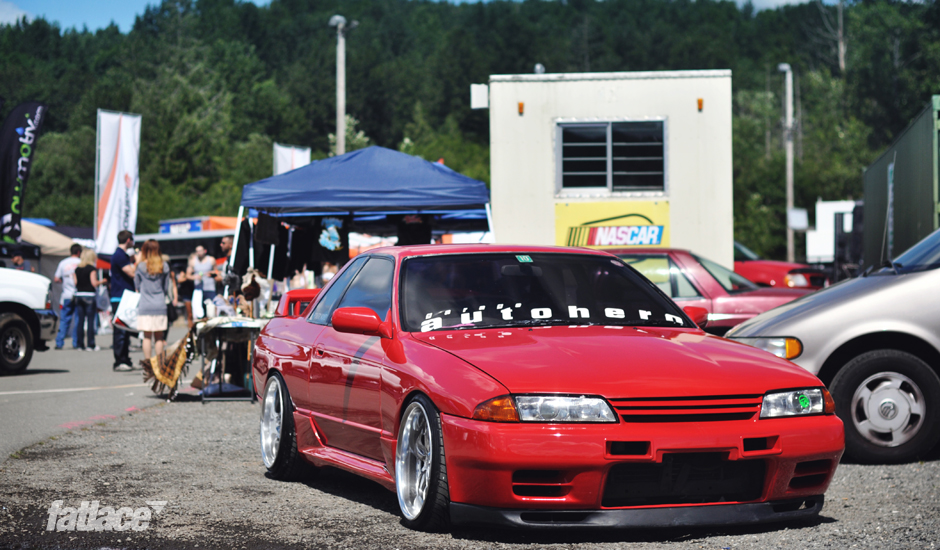 But then the picture becomes clear. This is the Northwest, which is lucky enough to share the border of Canada. Why is this so great? Because unlike our strict government which seems to have a personal grudge against anything that is JDM, Canada has much more relaxed rules about importing Japanese metal. As a result, if you want to see rare Japanese cars in the US, chances are this corner of the country has what you want. 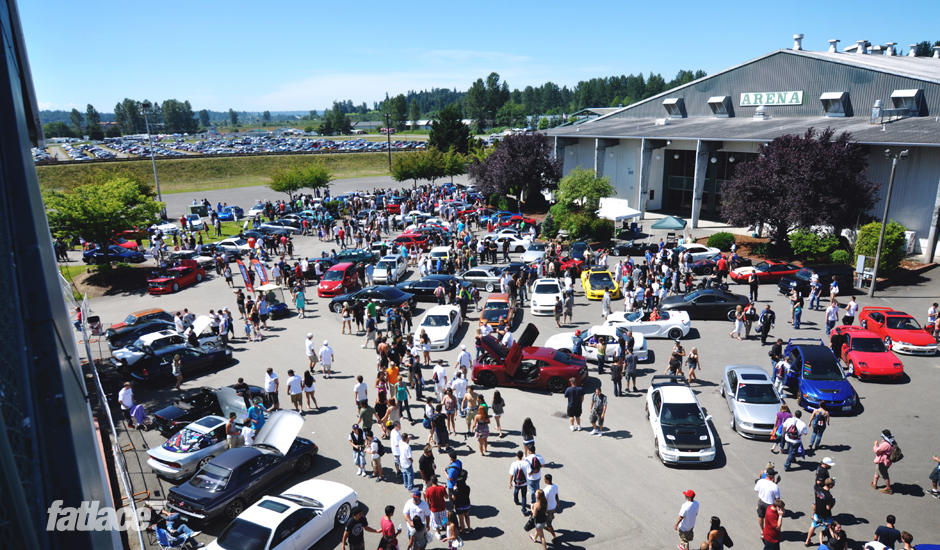 Because this was my first time at Monroe, I wasn’t really sure what to expect. Since it was away from Seattle, the attendance wouldn’t be any bigger than places like Vegas, right? Wrong! Friday practice had a good amount of people, but on Saturday the crowds were immense! Our Slammed Society Showcase had a very healthy 100 entries. Judging the cars for winners was definitely more difficult than past events, but eventually the winners were sorted out. The VIP winner went to the most gangster W140 we’ve ever seen. This wasn’t a typical shiny sedan lowered on shiny wheels. When this huge thing rolled in, it had presence. Our Time Attack winner had to go to the white Evo which had more than enough fast parts on it to embarrass many more expensive cars on the track. Our Slammed Society winner was the VIP-styled Previa. This was the only time we’ve broken our static-only rule simply because, well, look at it! There was no way we could ignore it. The owner had intended on entering last year, but he wasn’t quite finished with it. He felt it’d be better to wait and show it as it should be and we’re glad he did because it was definitely a show-stopper! Our Drift winner was the text-book perfect silver S13. From every angle, this was a proper looking drifter that would fit naturally sliding sideways at Ebisu. The proper SR20 power-plant didn’t hurt either. And finally, the Classic winner had to be the mint condition, MkI Rabbit. This little gem was absolutely immaculate with every part gleaming in the bright sun. You just can’t go wrong with the simple, clean styling of these first-gen VWs. As is often the case, there were still many cars that stood out apart from the winners. Such as this Veilside-kitted MkIV Supra. While the front design has the controversial styling that is often associated with Veilside, this was a fully built monster with two huge turbos helping the 2JZ pushing out over 800 hp. 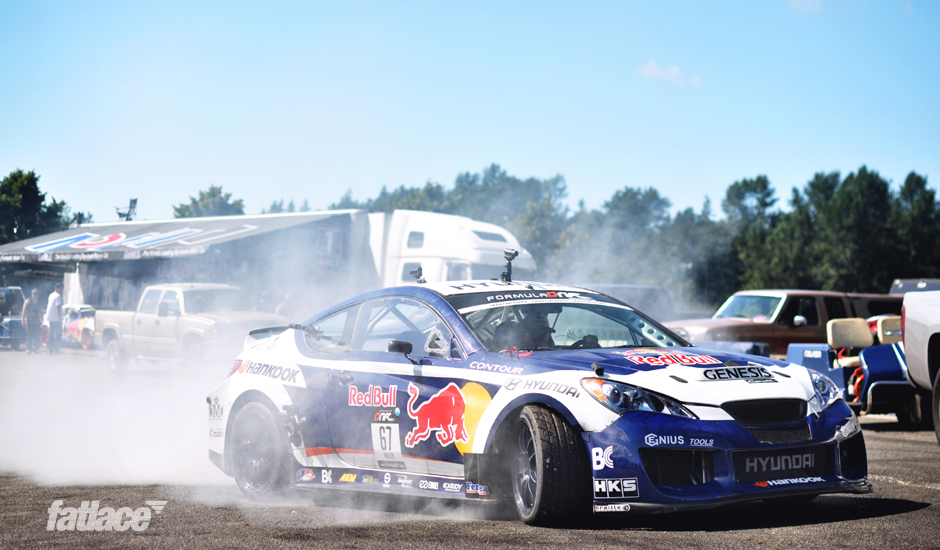 Now for the drifting! 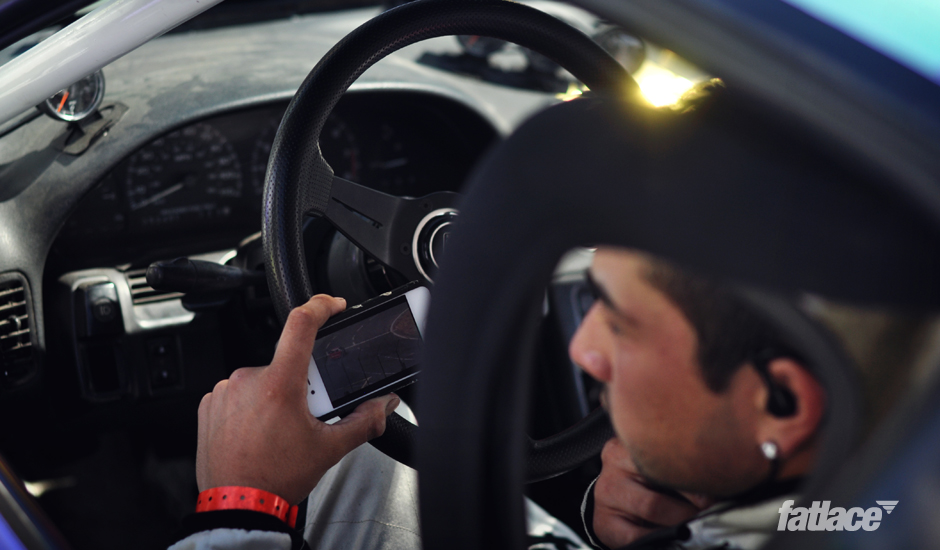 Our drivers Walker Wilkerson and Matt Field had some pretty impressive practice runs and both were able to qualify for top 32. Here, local favorite Walker waiting for his qualifying run, watching Formula D Live from his phone to see how the other drivers are doing. Ain’t technology great? 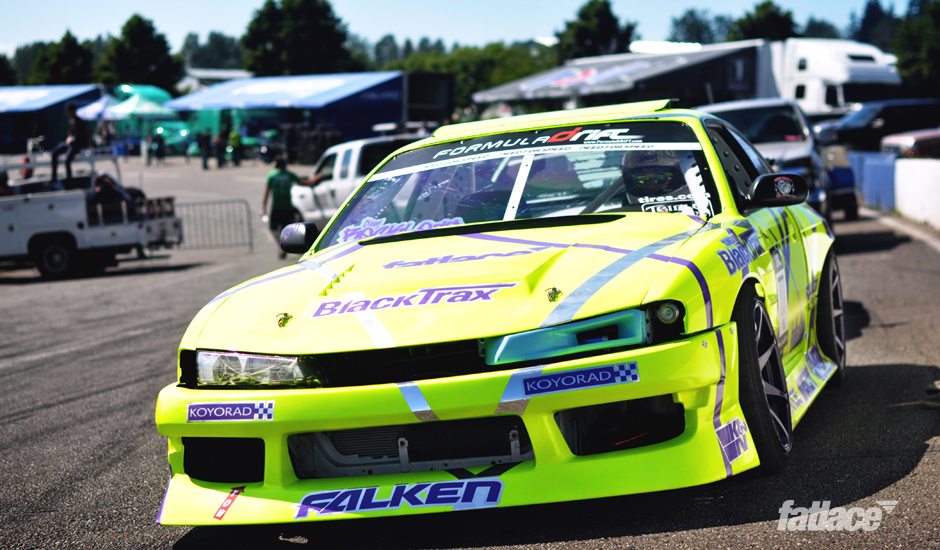 Field’s car looking as mean and agressive as ever. Despite it’s “NASCAR” heart, this thing still has more of a grassroots vibe to it than the typical fully-built Formula D race cars out there. 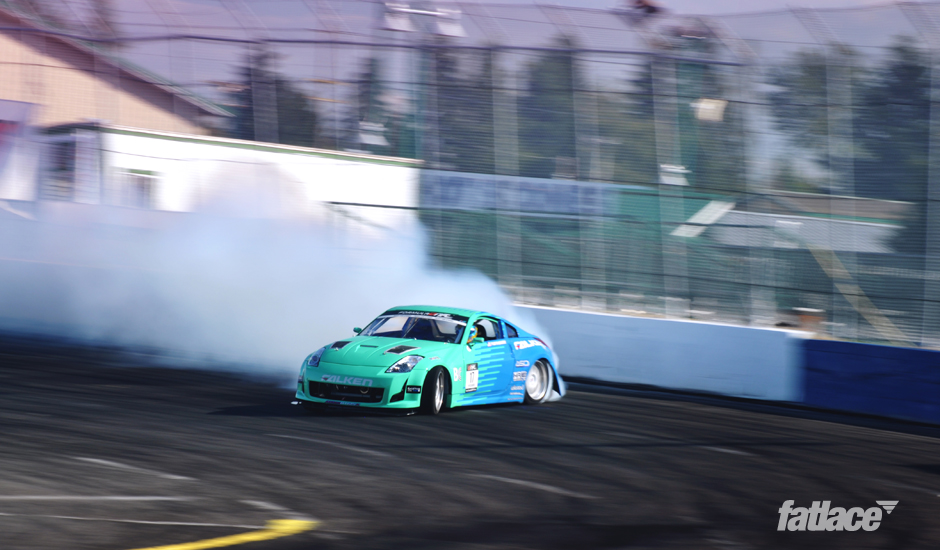 The course layout itself was great, with a high speed banked turn leading into a series of turns that got tighter and tighter. Many of the cars were pushing out ridiculous amounts of smoke as they rode inches from the high wall before they had to slow down for the quick switch backs. 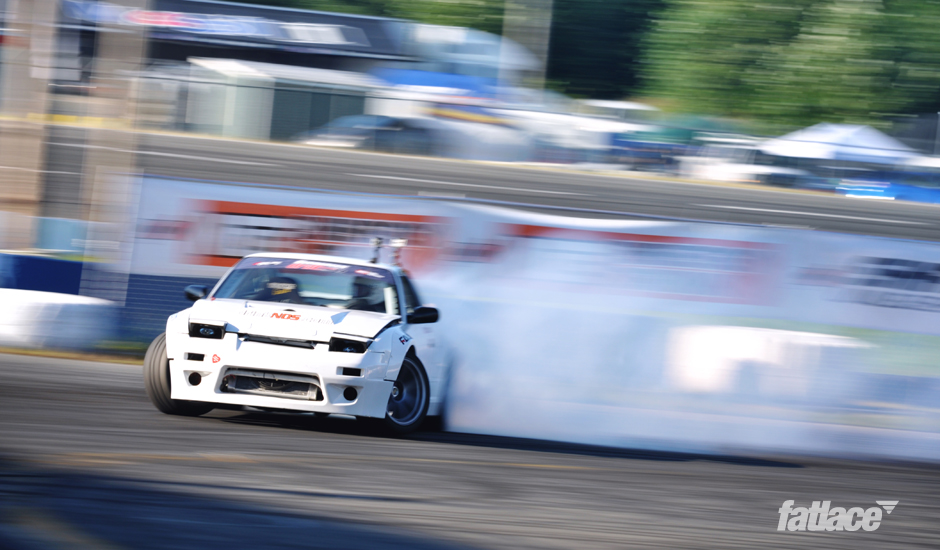 One thing that definitely caught my attention was the Pro-Am series. The drifting was just as impressive as the Pro series, but what I noticed was the cars themselves. The Northwest definitely knows how to make some great looking cars and their drifters are no exception. It seems as though they put a little more effort into the styling part of drifting than many of the other areas, as this Rocket Bunny kitted S13 is finely displaying. 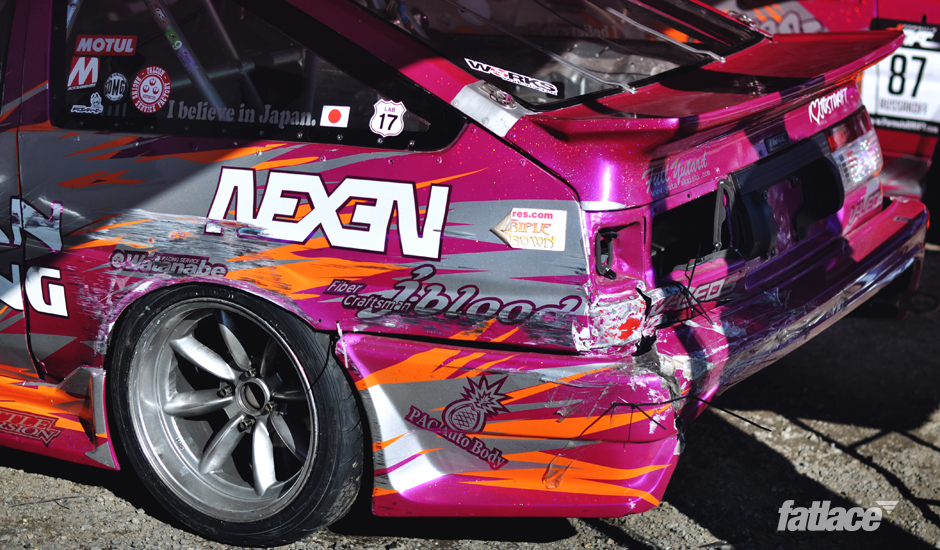 Unfortunately, there’s always the risk of these great looking cars being mangled all in the name of drifting, and Evergreen Speedway’s walls took its fair share of victims. There were still plenty of scrapes as well as mechanical issues. Still, nothing a little elbow grease and zip-ties can’t fix, right? In the end, Daijiro Yoshihara took first, with Chris Forsberg in second and Fredrick Aasbo in third. In the Pro-Am series, our own Ian Fournier finishing first. Nik Jimenez got second and Chris Jeanneret finished third. 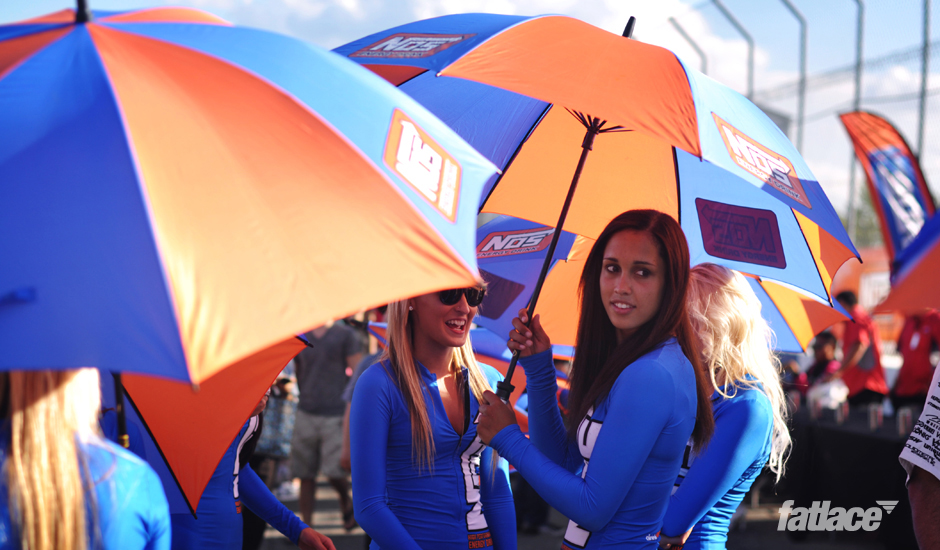 The vendors were out in full force, with the lovely ladies in blue and orange taking advantage of the perfect weather. Since there’s always a great mix of beats pumping out of the Need For Speed tent, they decided to use it to hold their own breakdance competition. 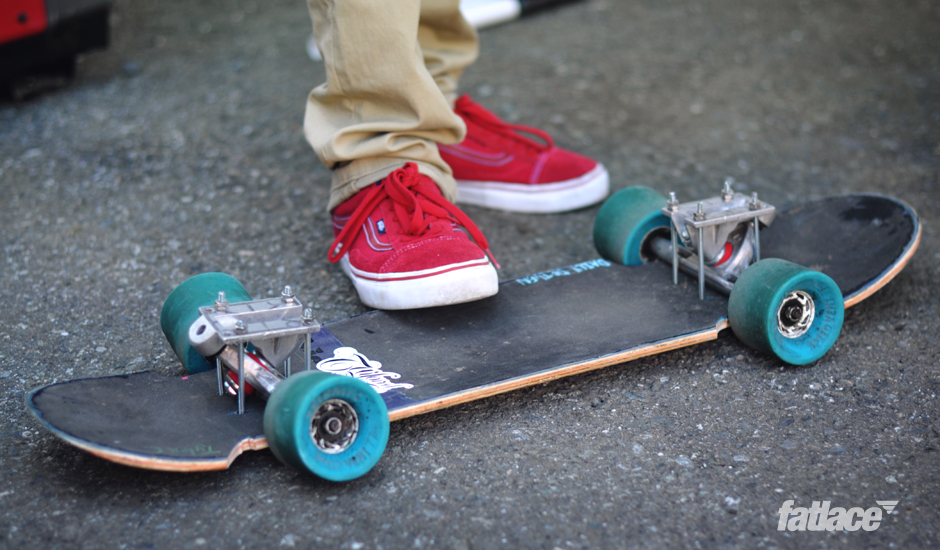 And of course, the slammed and cambered skateboard grabbed every passerby’s attention. Even though this isn’t the first of its kind, there’s no doubt that since many people have seen it, there will be more of these in the near future thanks. Overall, the whole event was that perfect blend of having enough action and people to keep things busy but being relaxed enough where it didn’t feel hectic and overwhelming. Either way, Monroe has definitely become a high point in the Formula D roster and must go to for years to come.