The 2014 Formula Drift season kicked off last weekend in sunny Long Beach, CA. Everyone has been anticipating this first of 7 events in the US this year. The excitement for FDLB has been building up in the past couple of months as teams hurried to get their tuning and testing done in time for this epic weekend. Not only was this the first event of 2014, but Long Beach is probably one of the most dangerous tracks on the circuit. Hitting one of those white concrete barriers at a high rate of speed is probably something no driver wants to experience. Our 2014 Fatlace team consists of the same usual suspects, Dai Yoshihara, Matt Field, and Forrest Wang. In addition to these awesome drivers, Ken Gushi will be on board this season as well. Follow me as I take you through my trip to Long Beach. 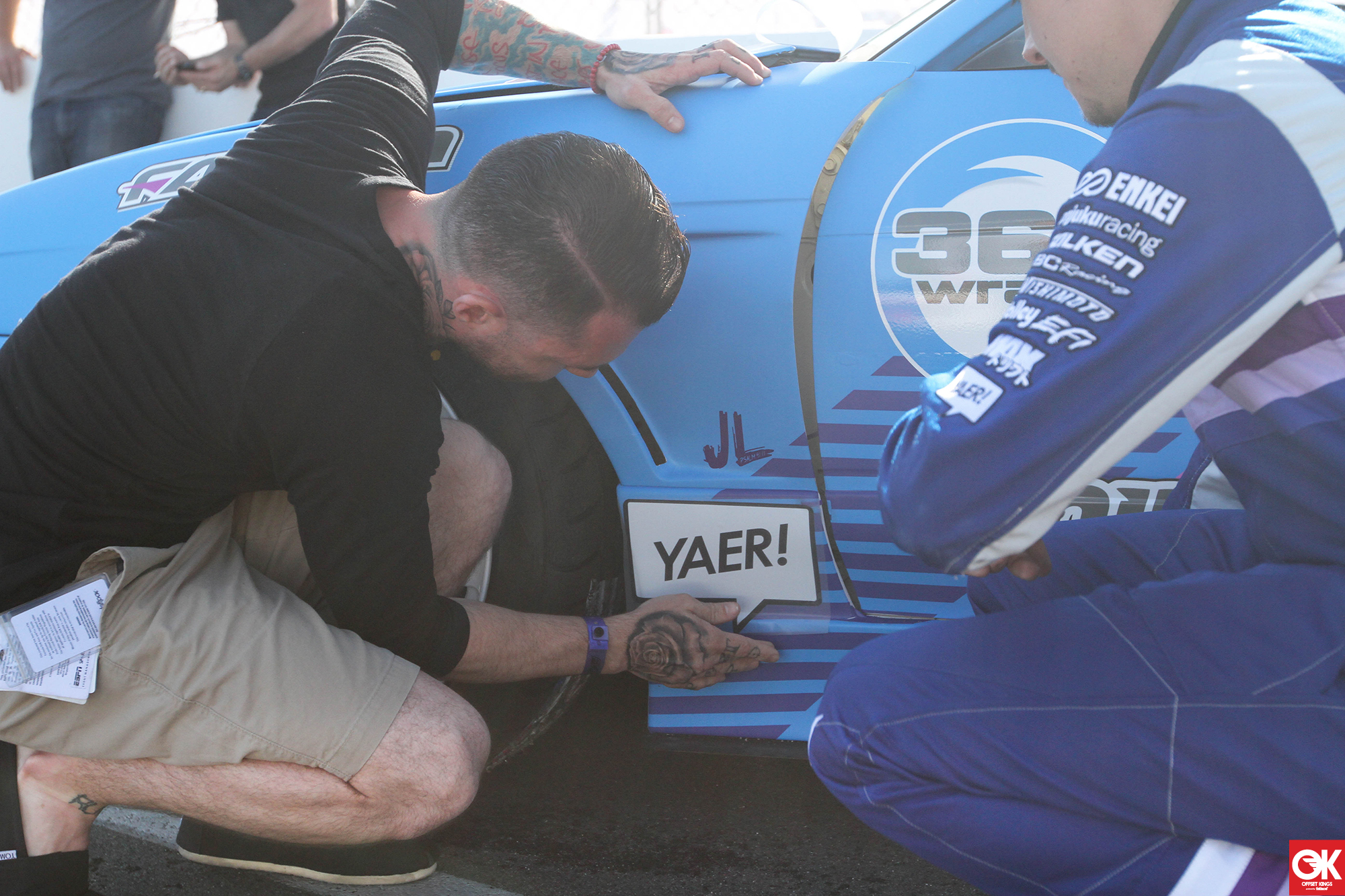 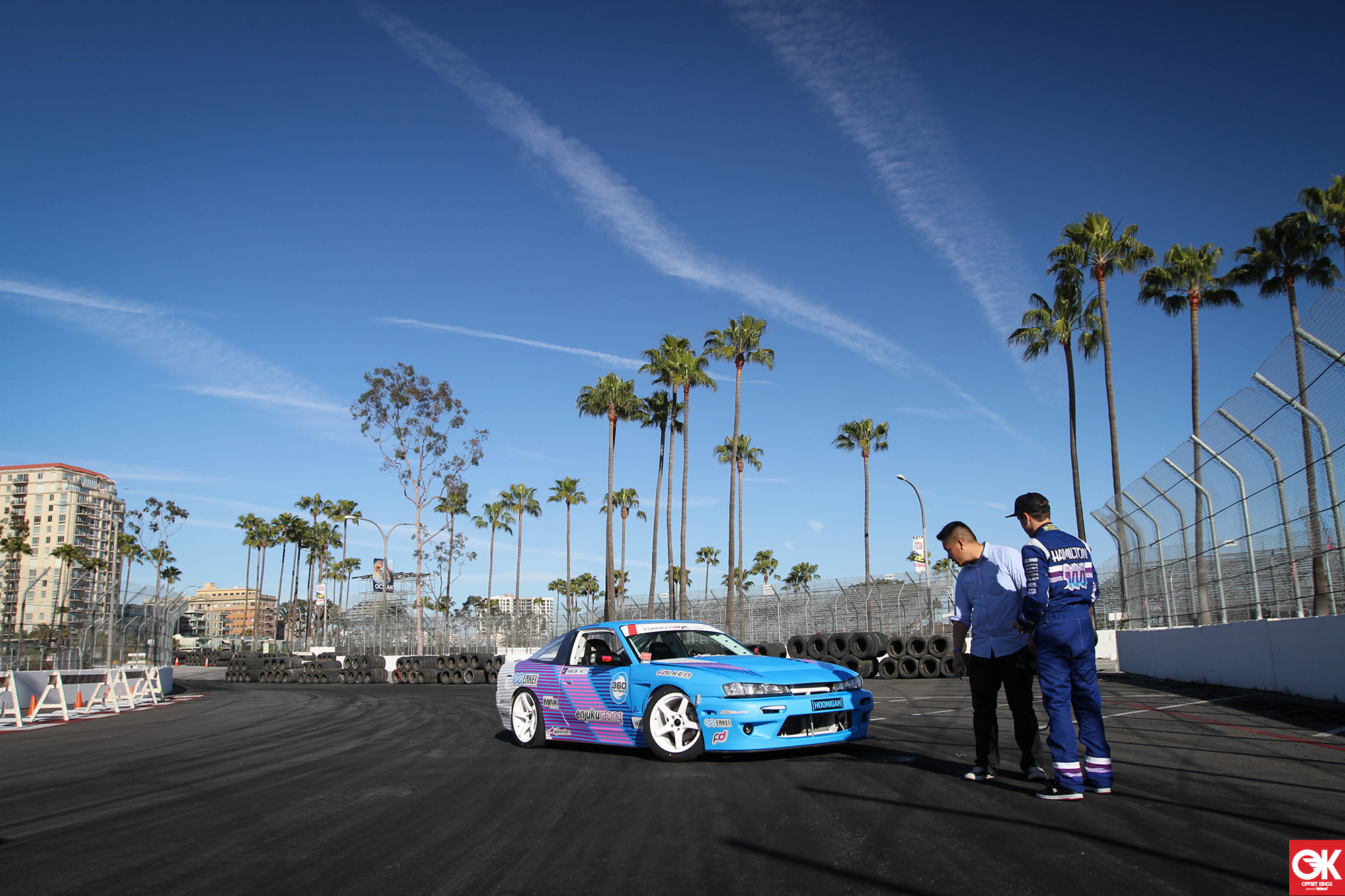 I arrived at LAX early Thursday morning and went straight to the track. I met up with my buddy Alex Wong of Emotive Image and Ryan and Sully from YAER to hang out while they did a photoshoot for up and coming driver Nate Hamilton. The track was pretty much dead on Thursday since trailers were arriving at the paddock and vendors were setting up for the coming weekend. 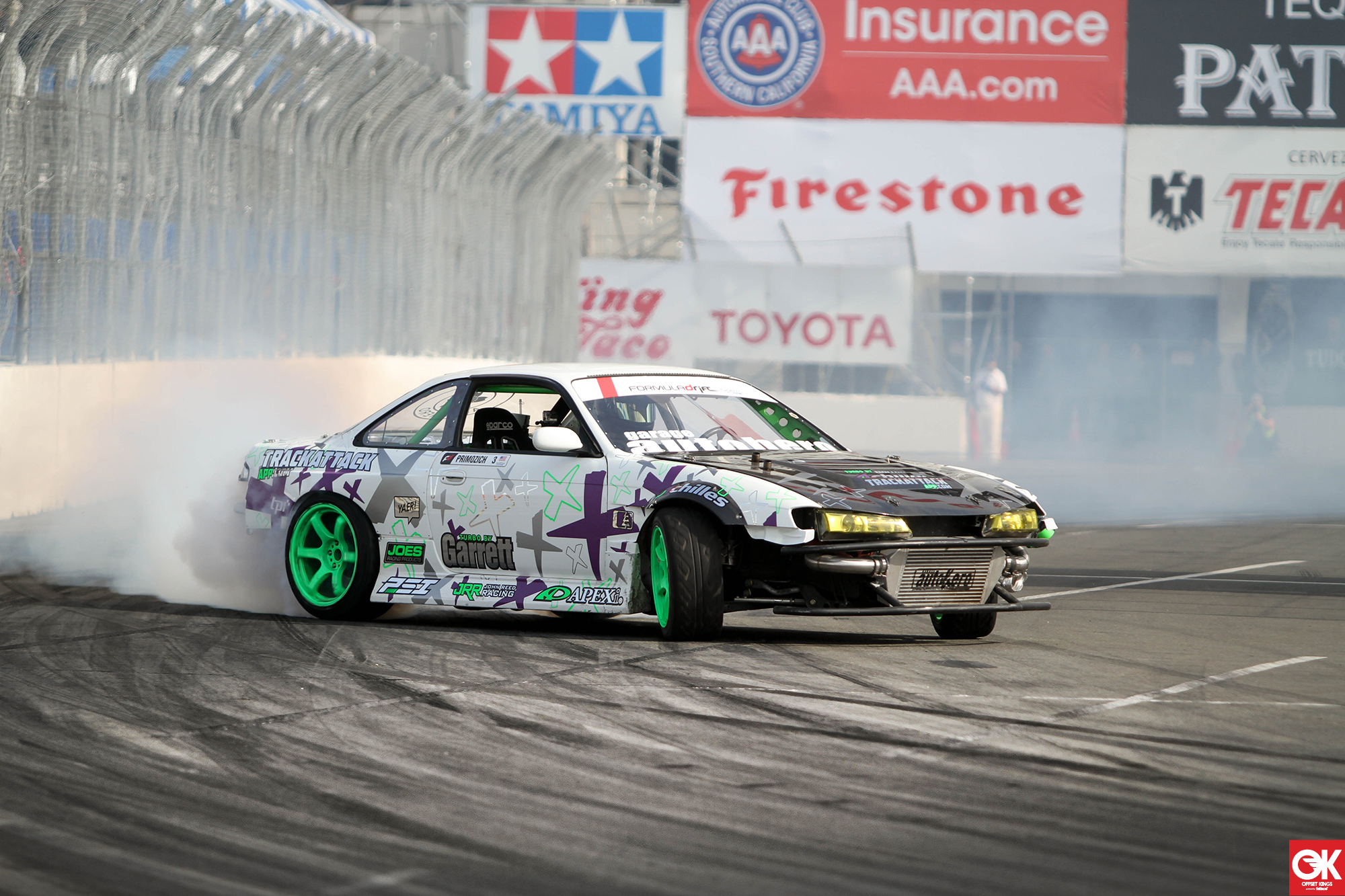 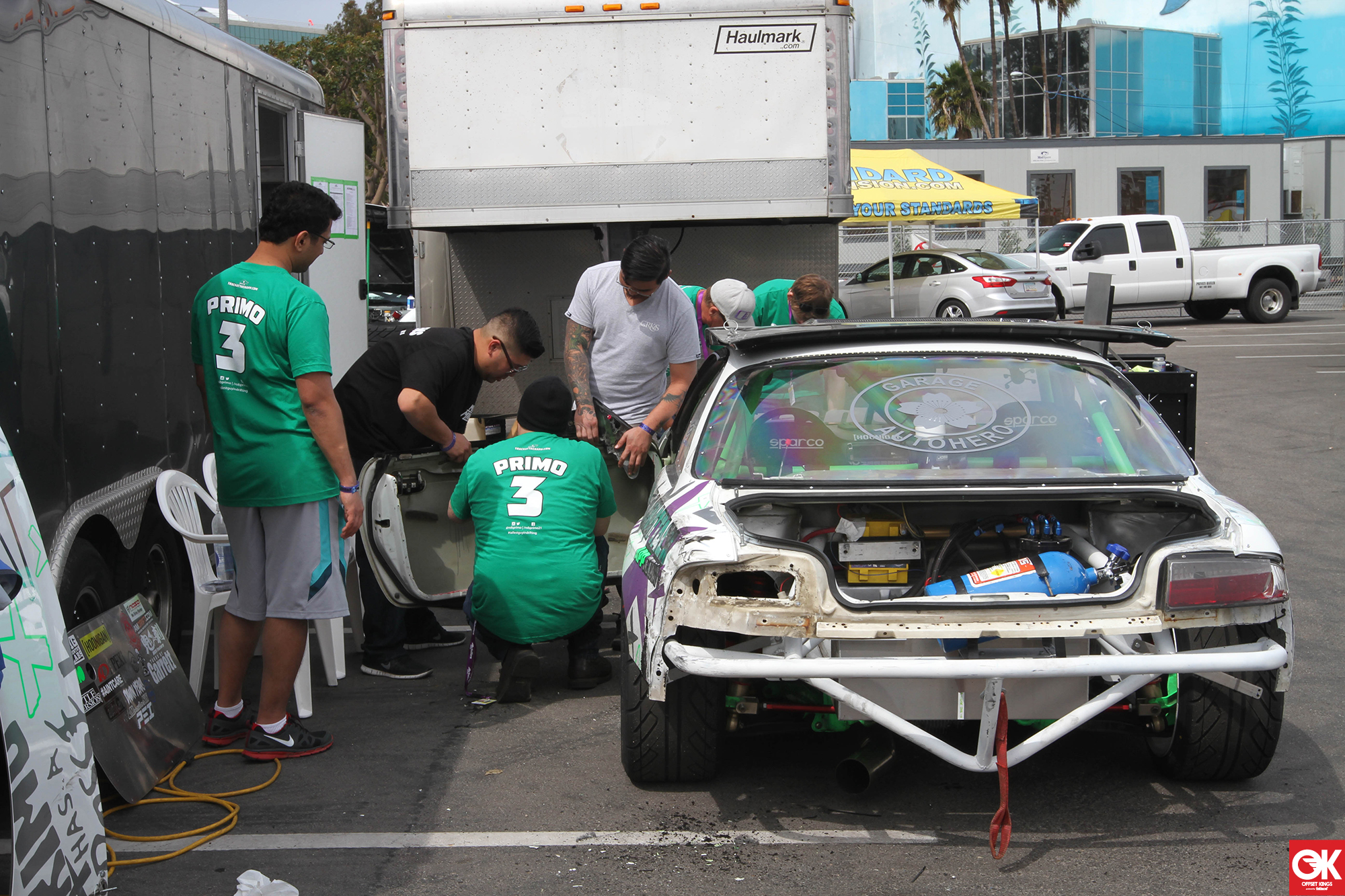 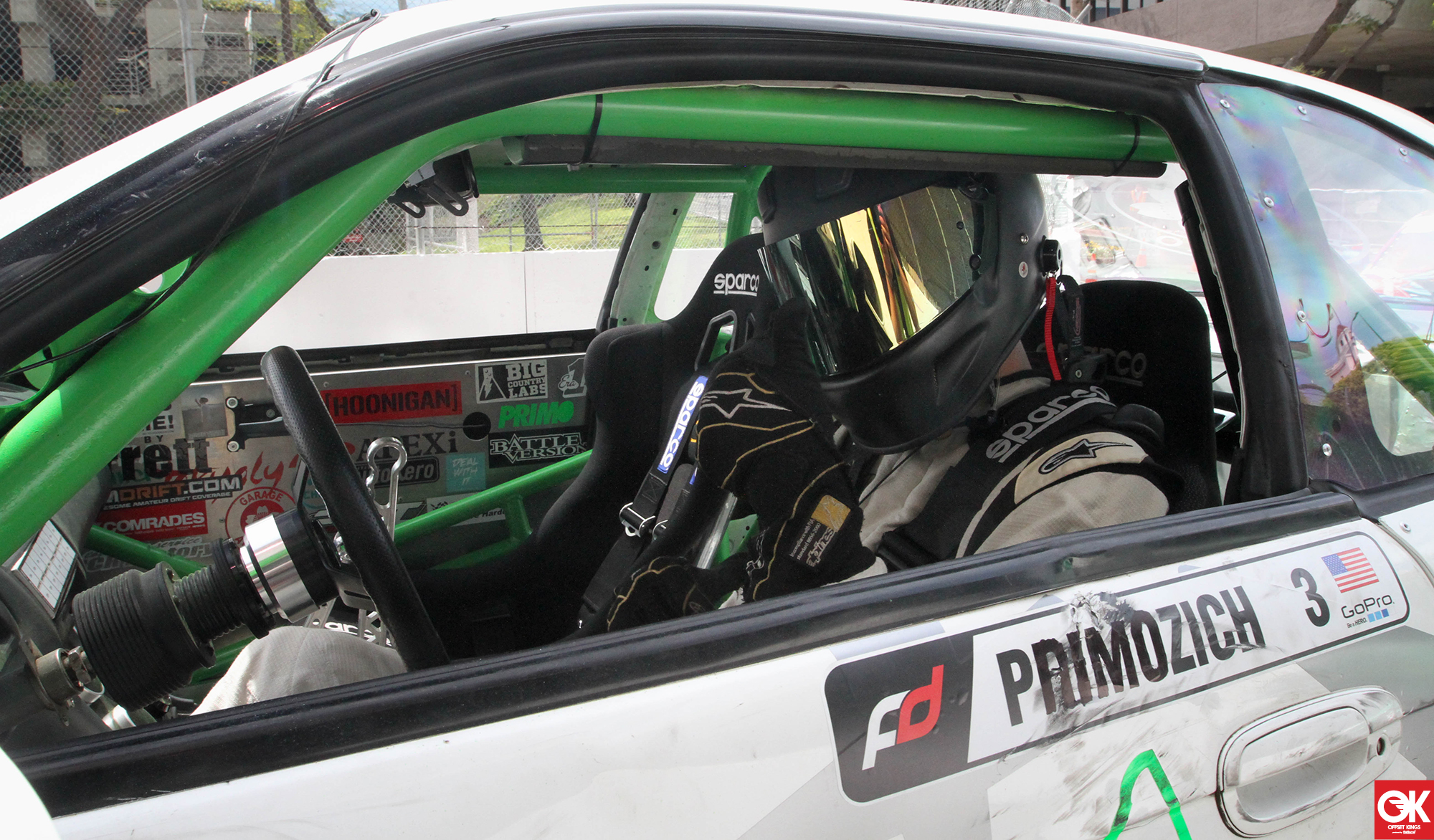 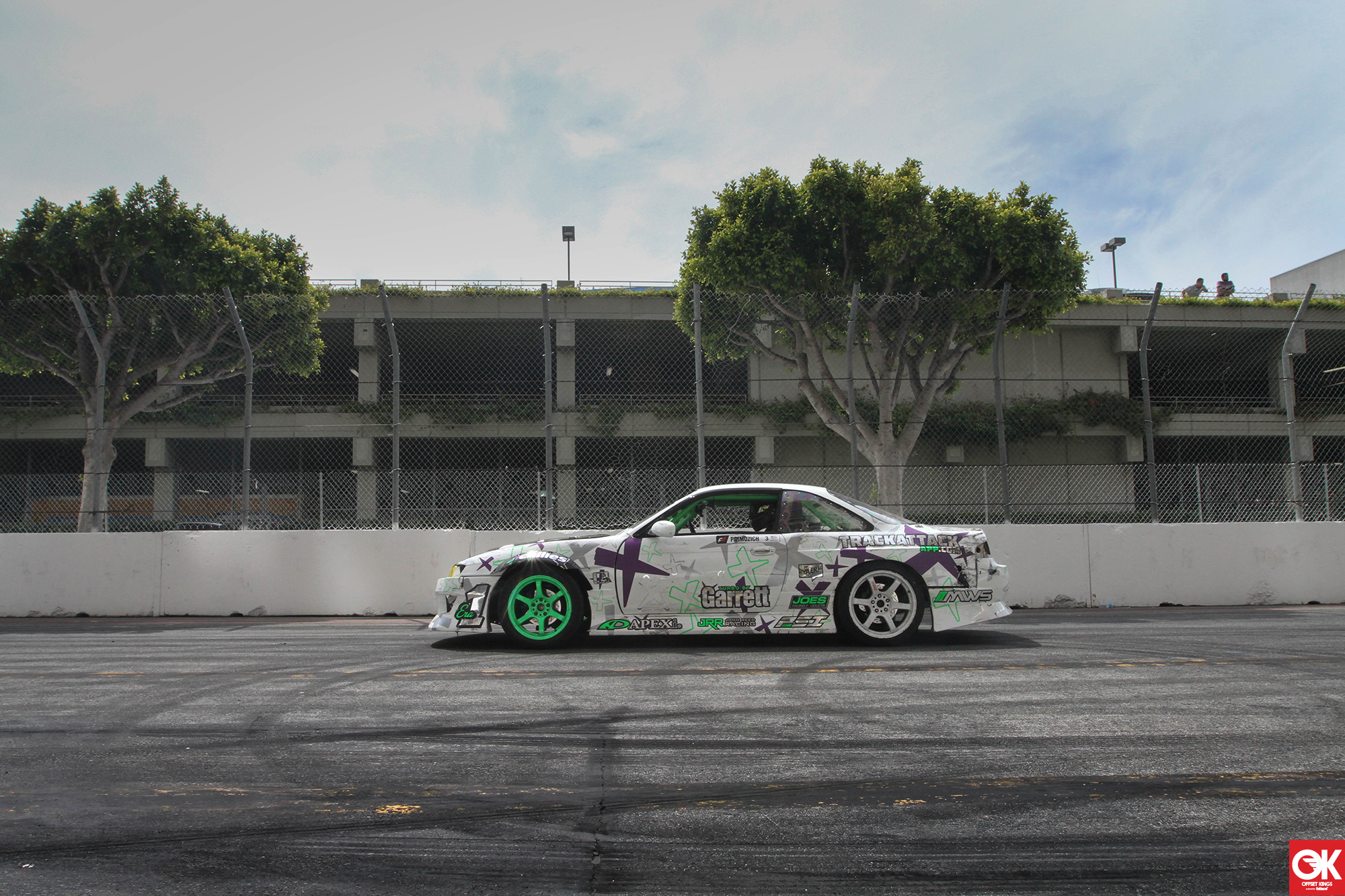 I had a chance to catch up with the Pacific Northwest’s own, Rob Primo on Friday. Primo comes into the 2014 season with a new livery designed and made possible by Ian Dillon. Rob had an encounter with the wall during one of his practice runs but luckily it was only cosmetic damage. Ray from Garage Autohero and crew were there to get Rob bandaged up and back on the track. Rob drove like a bat out of hell after his run in with the wall and drove great for the rest of the day. Unfortunately, he was not able to qualify. I look forward to watching him progress and kill it this season. 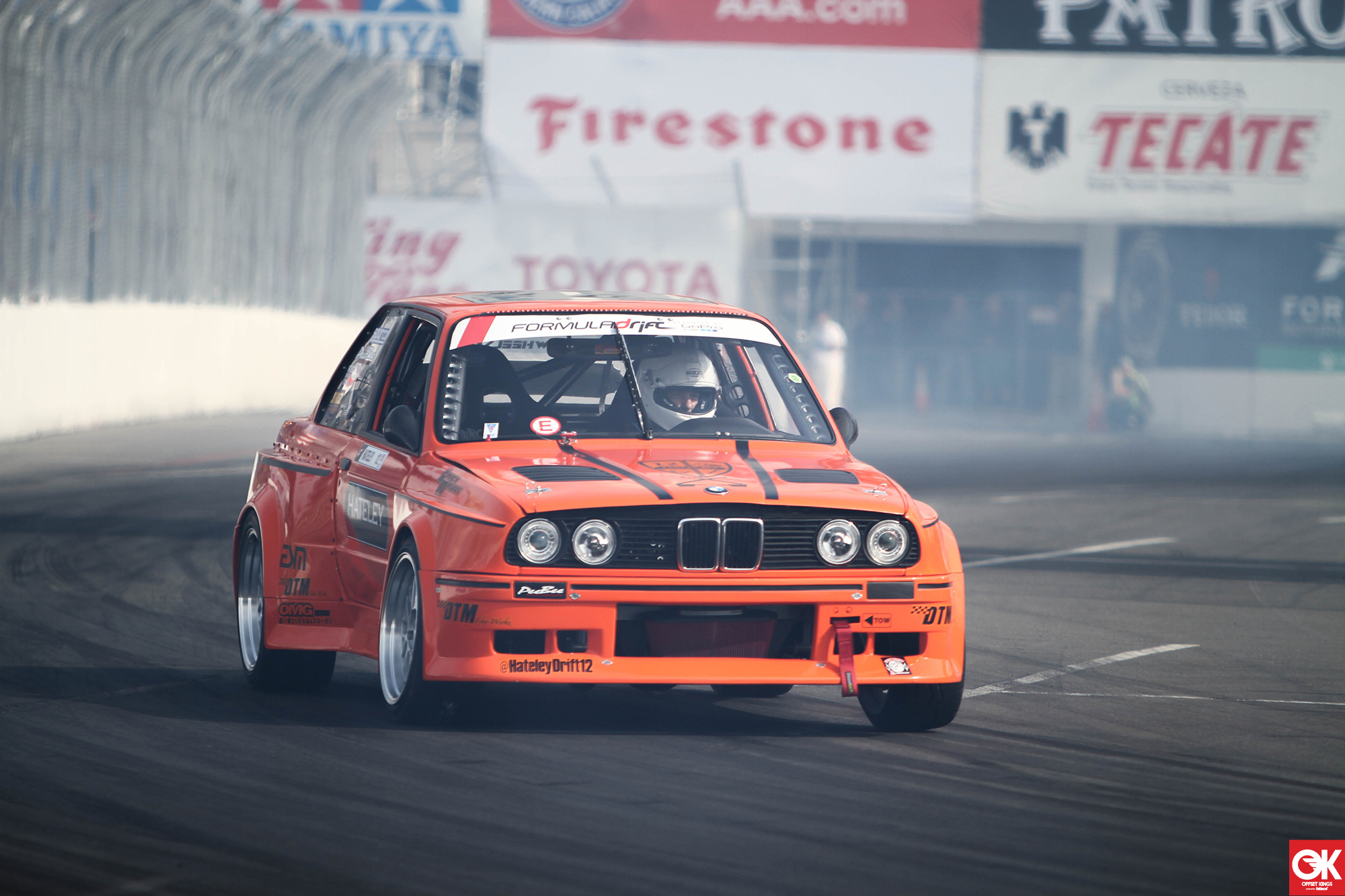 Andy Hateley’s LS3 powered BMW E30 really stood out to me. This car from the ground up is amazing. 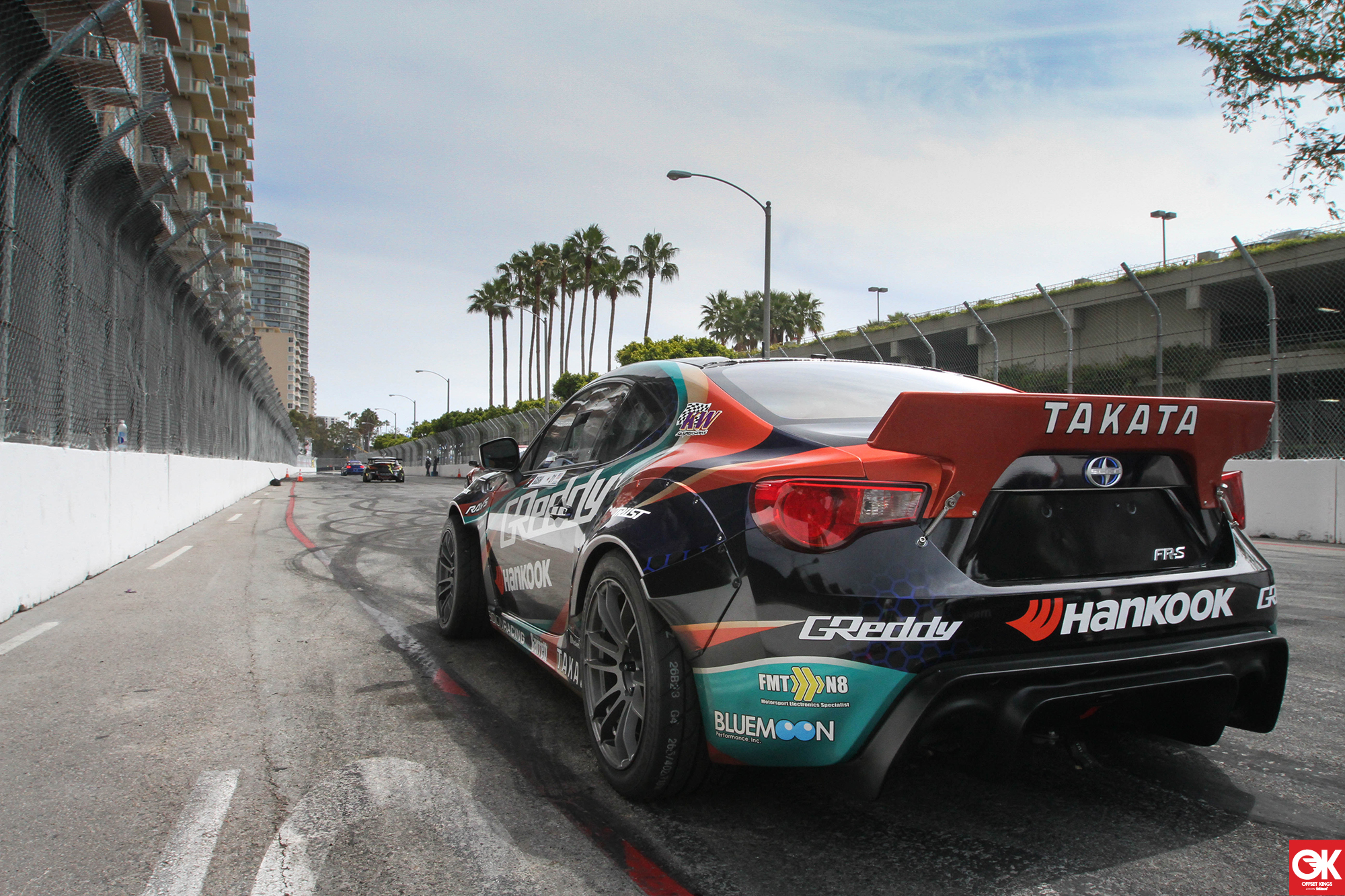 I spent a lot of time during the weekend at the starting grid. There is something about the grid that sets it apart from all the other media spots throughout the track. One second it’s calm but the next thing you know, smoke fills the air and all hell is unleashed. I was definitely washing tire debris out of my hair and blowing black snot rockets out of my nose at the end of the day. 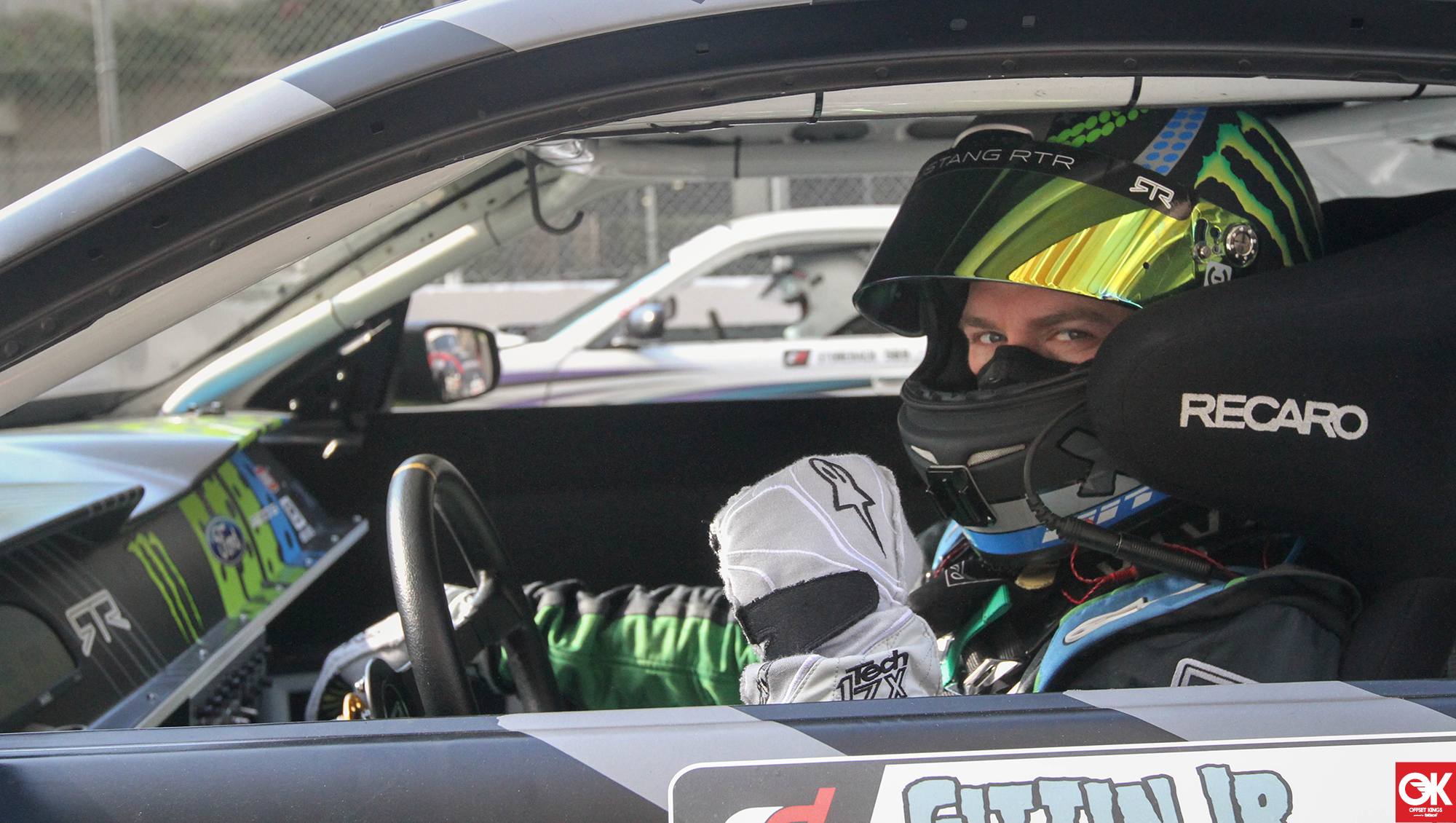 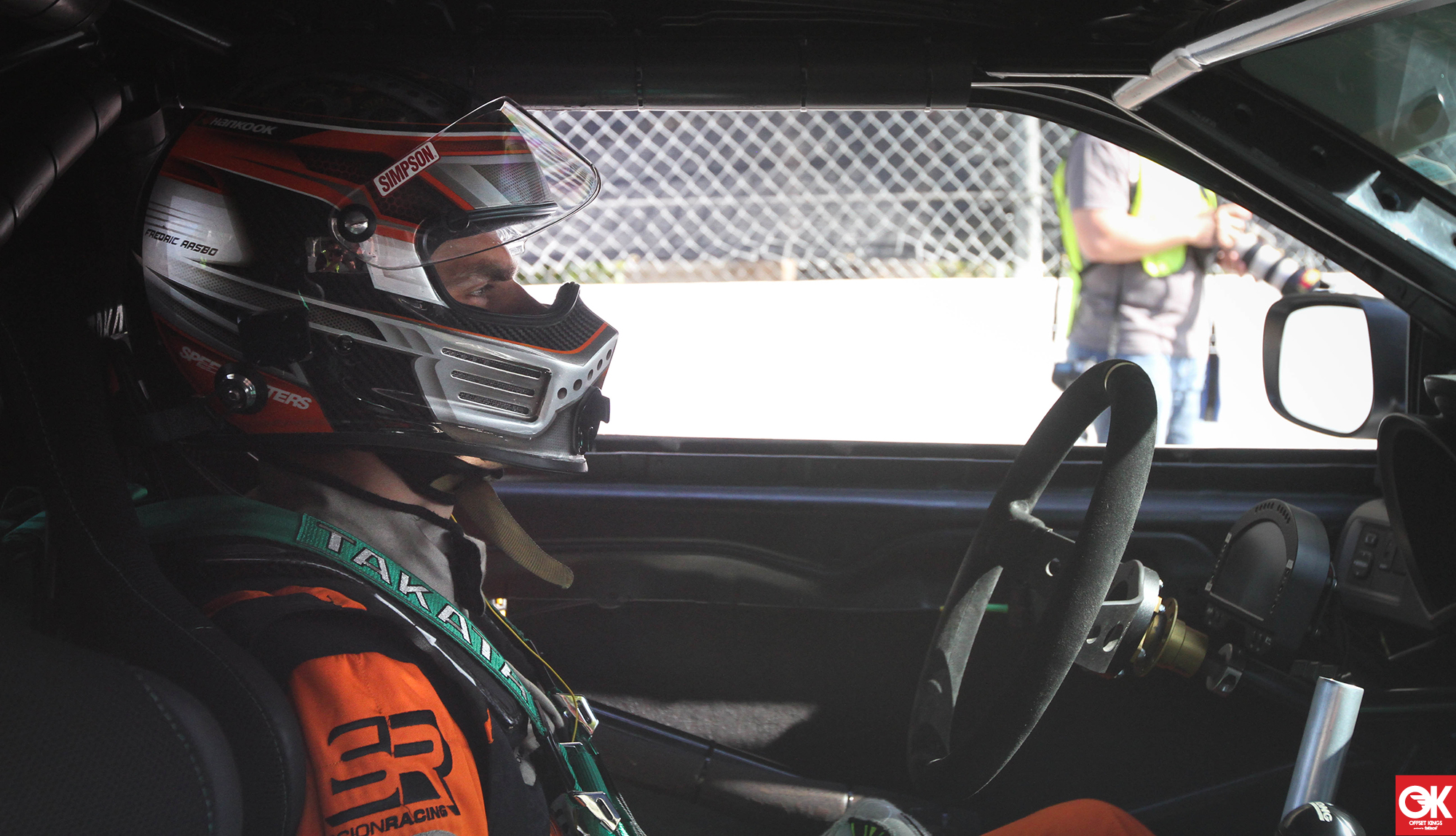 Everyone definitely had their game face on 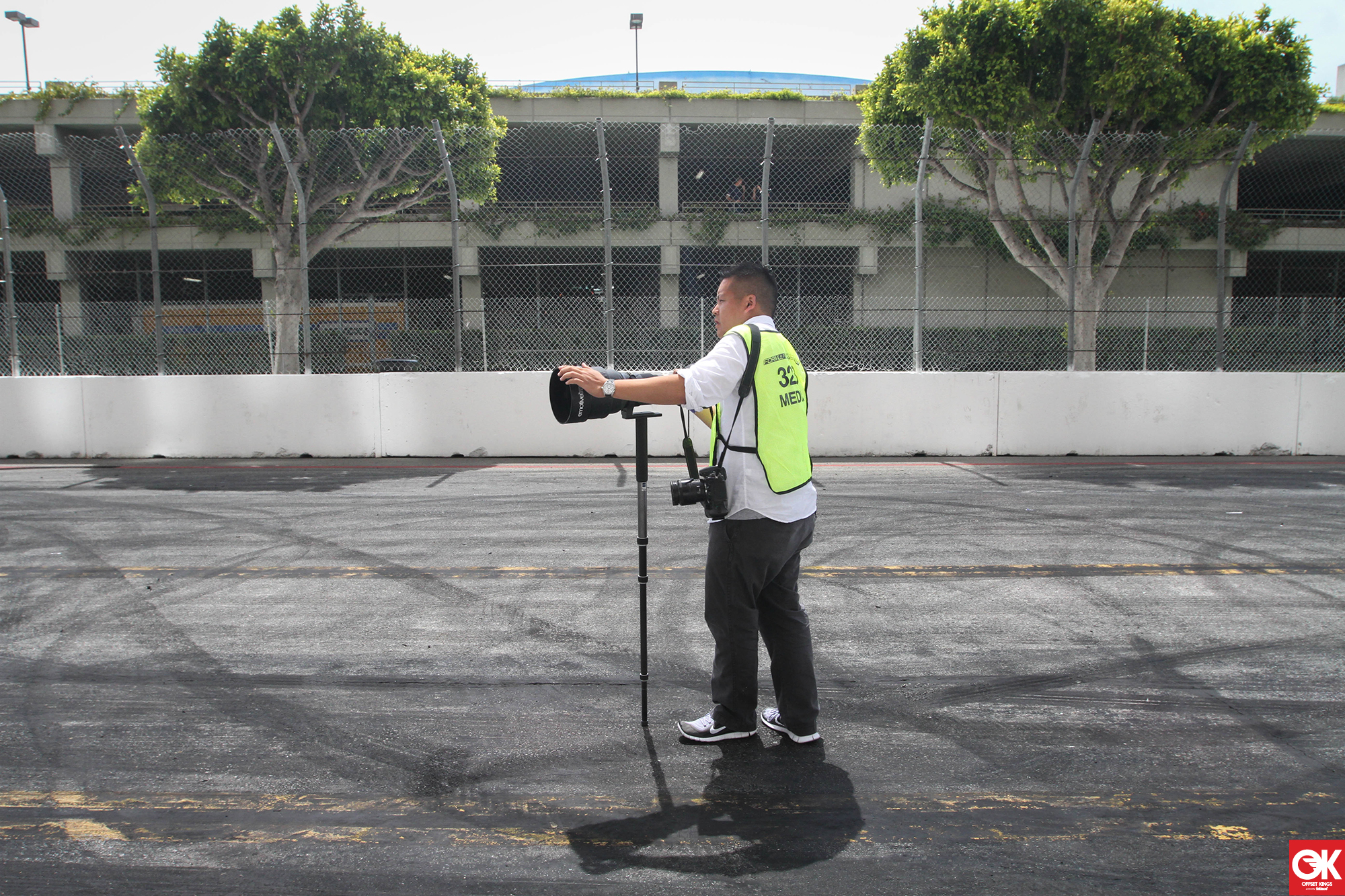 Alex doing what he does best…..and selfies Dai Yoshihara comes into the season with a new twin turbo V8 Subaru BRZ with the signature Falken livery. Dai drove extremely well all weekend and made it easily into the Top 32. Unfortunately, he was knocked out early by Chris Forsberg during the main event on Saturday. Forrest Wang had a strong running throughout the weekend and made it to the Top 8. His run against Michael Essa just didn’t go his way. Wang has always been an exciting driver to watch and i’m stoked he’s starting this season on such a high note. I’m super bummed that Matt Field was not able to run in Long Beach due to a crank trigger problem. His car comes into 2014 with a completely new look and I look forward to seeing him out on the track very soon.