California...I'm coming for you.
Serendipity
Thanks Houston Astros Tickets for the support
ART & MUSIC / Posted by Tricia / 17/08/2015

After hitting Known Gallery, we went for a change of pace. No hype, no fashion, no bloggers with better cameras than mine, just art. It was unfamiliar art. Art that is compelling and mysterious. And forces you to think about the world outside your own.

Now on view at LACMA is “Islamic Art Now: Contemporary Art in the Middle East”, a first time collection for the museum with over 20 powerful and provocative pieces.

I will admit. I do not have a vast knowledge of the Middle East and Islam. What I know is what I’ve read in textbooks, novels, and newspapers, what I’ve learned in World Religions courses, what I’ve seen in the news, or what I’ve heard from friends who identify with the culture. From there, I have developed an opinion that is empathetic and curious, hopeful and scared. And when it comes to the topic of art, I really didn’t know anything.

The exhibit opens with a neon sign that reads “God is Alive, He Shall Not Die”. It sets the tone for what we were about to see. It’s unexpectedly modern and beautiful and challenges the common perception of religion. This Islamic art, then, is not necessarily about Islam. It’s about a world that has been shaped by Islam, by an Arabic alphabet, and evolved into something complex. 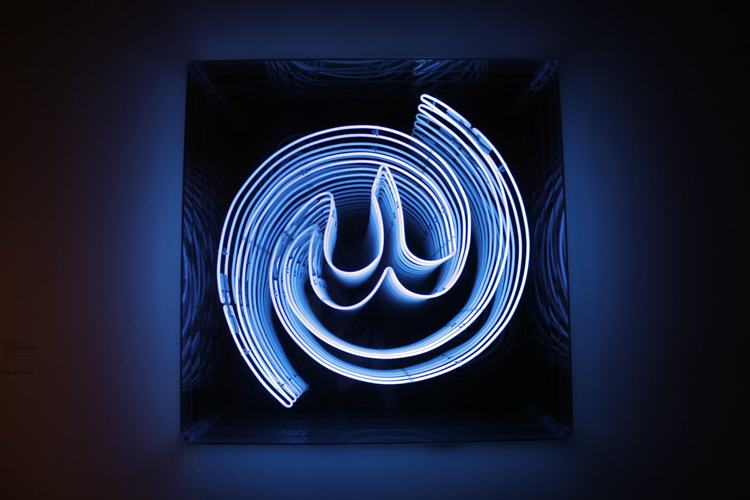 Then we turn the corner and see this woman. Photographed and covered in calligraphy. What did it say? Is the writing some kind of protection? Is it a shield? Imprisonment? Contrary to my initial questions, the calligraphy actually read “This is who I am. See me for who I am. Read me if you like, but this is me.” After realizing that, I wondered if she was talking to the viewer, to her government, to her husband, to her community. 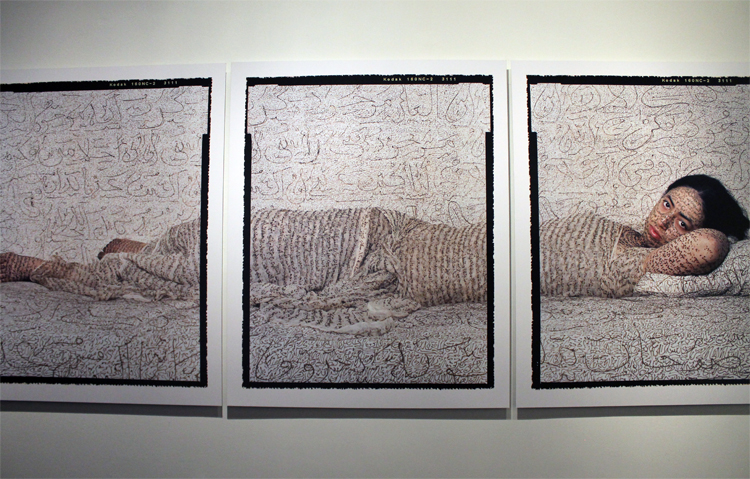 This one was easily a favorite. Two photos juxtaposed in contrast of each other. On the right was a blindfolded woman in hijab with nothing around her. On the left was another blindfolded woman. But she was taking a selfie and surrounded by books. I thought of double consciousness, of the clash of cultures, of the disparity in freedoms, of Azir Nafisi’s Reading Lolita in Tehran. 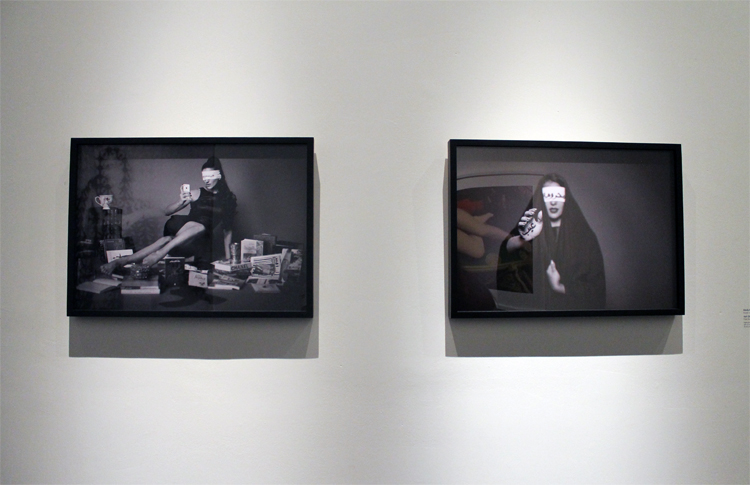 Next to it was this one called “Gang of Kesh Part 2”. It depicts a group of women clad in the traditional head scarves and veils, but in polka dot, camo, and leopard prints. They are posing as a biker gang, cheekily challenging the stereotypical images of veiled and reserved women of the Middle East. They are not meek or fearful, but confident and powerful. 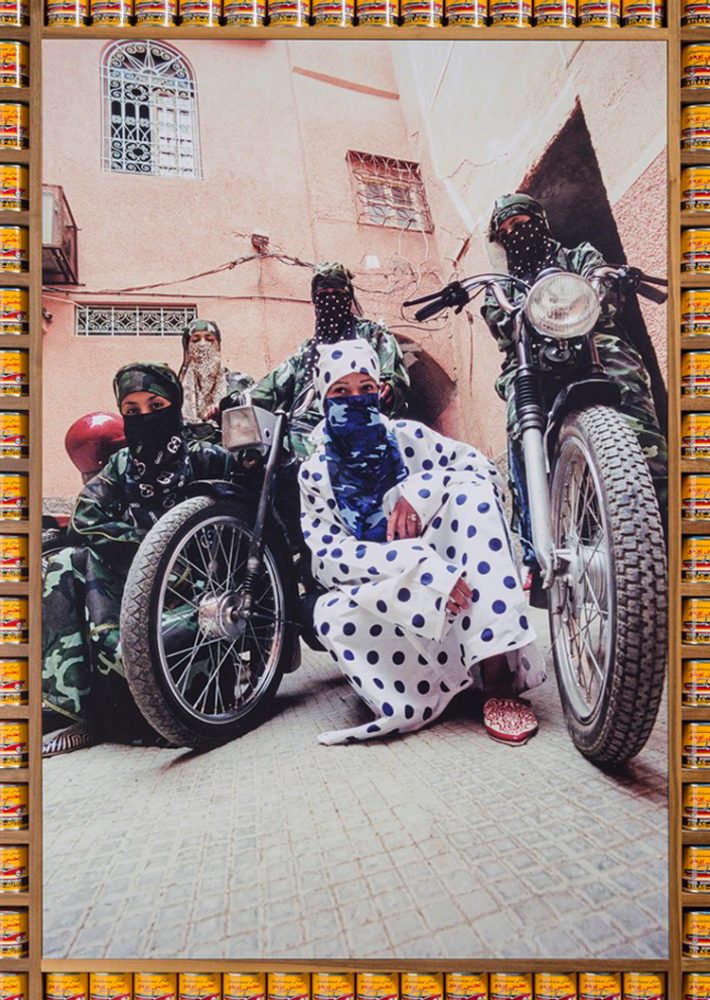 This is the piece that had us in awe. Coincidentally, it is titled “Speechless”. We saw a portion of a woman’s face, circled by a black headscarf. What first looks like an earring is actually the barrel of the gun. Her face is covered with calligraphy – words of martyrdom and protection. But we translated it more to menace and melancholy. 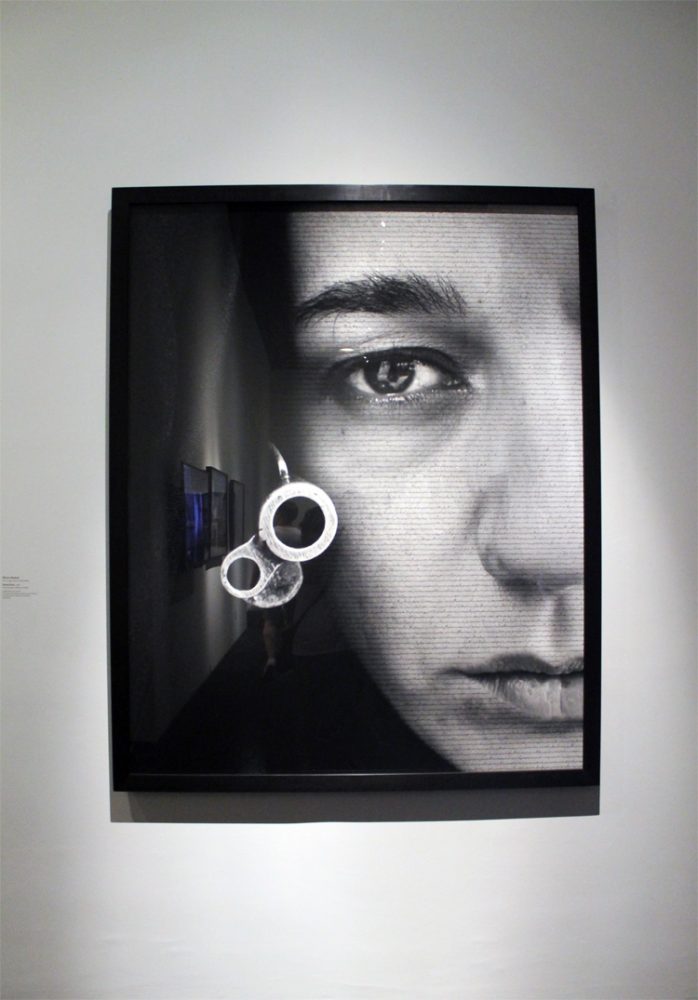 I can continue on. I can give you a photo of every piece of art displayed. Like the graffiti one that documents the turbulence of the Iranian Revolution (see featured image), or the panoramic shot of everyday people in Tehran. But that would take away my promotion of discourse about the Middle East. I encourage you to see it and I hope you find as much resonance as it did with me. Every piece truly lingers in the mind.

In this case, ignorance is not bliss. I opened up this post with admission to my own ignorance. After seeing Islamic Art Now, I can honestly say that I am much better off knowing than not.