Let me preface this post by saying that I’m not an art critic or connoisseur or snob or collector by any means. I get invited to the occasional art show, my creative friends are all pretty amazing in their respective fields and sometimes, I grow super passionate about the work I see. James Jean is one of those instances. I was first introduced to his name about six or seven years ago by way of comic books. Shortly thereafter he began collaborating in the fashion world alongside the likes of Prada and Philip Lim. As a broke college student I could only dream of purchasing a JJ original, so I scooped up limited edition prints whenever my budget allowed for it. His work has continued to remind me of a cross between East and West: an ephemeral mix of the American dream inspired by Asian aesthetics. It feels light (not to be confused with happy), fleeting and dreamlike, as if it’ll disappear any at any moment. His most recent exhibit at Jack Tilton in NYC is a far departure from the last time I saw his work at Martha Otero in LA. The macabre feel from nearly two years ago has given way to new mediums and much experimentation, all of which is still very, very beautiful. The gallery was packed to the gills so I waited until post-closing to shoot some shots. This crowd was maybe 1/100th of everyone who rolled through. 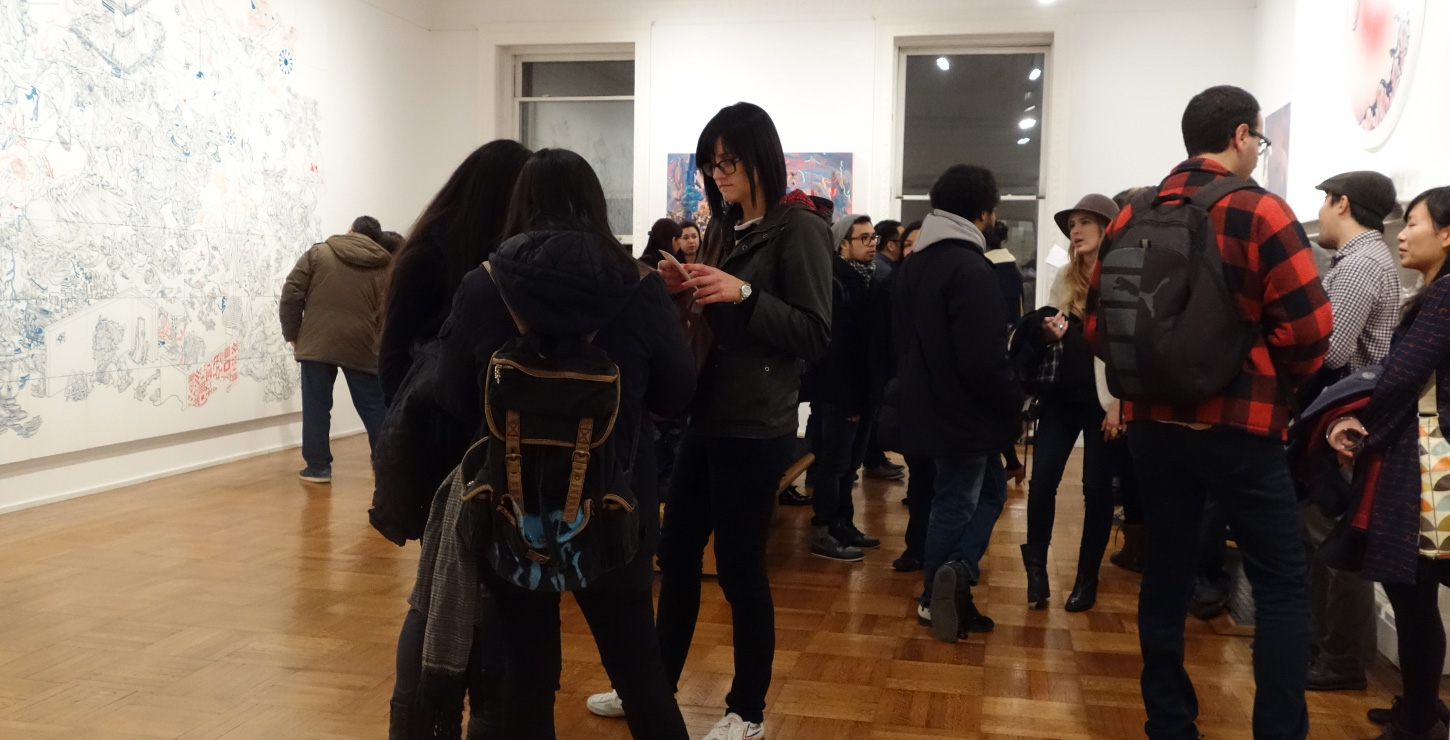 His portraits all seem a little less structured than that of previous shows. My personal preference sides with the older versions, but I am absolutely head over heels for the circular format in the middle. The only downside is that they’re only available in an edition of six. And I have no wall space, haha. 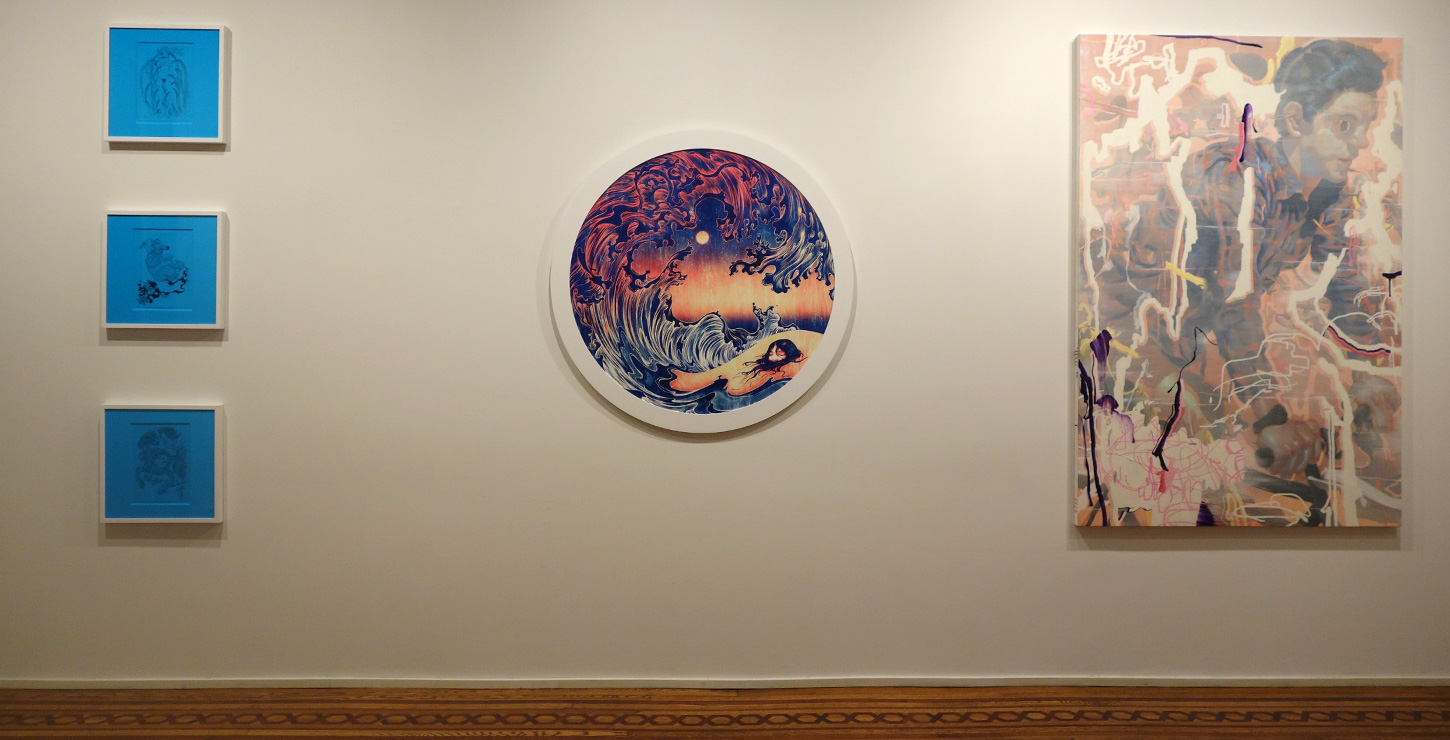 This is the first of his pieces that seems to retain a ‘pop art’ quality about it. My girl Sarah is crazy about it but it would clash with everything else I own. Big (and bright!) enough to overpower everything else hanging in a room, but still a beautiful piece and a great departure from everything else we saw. 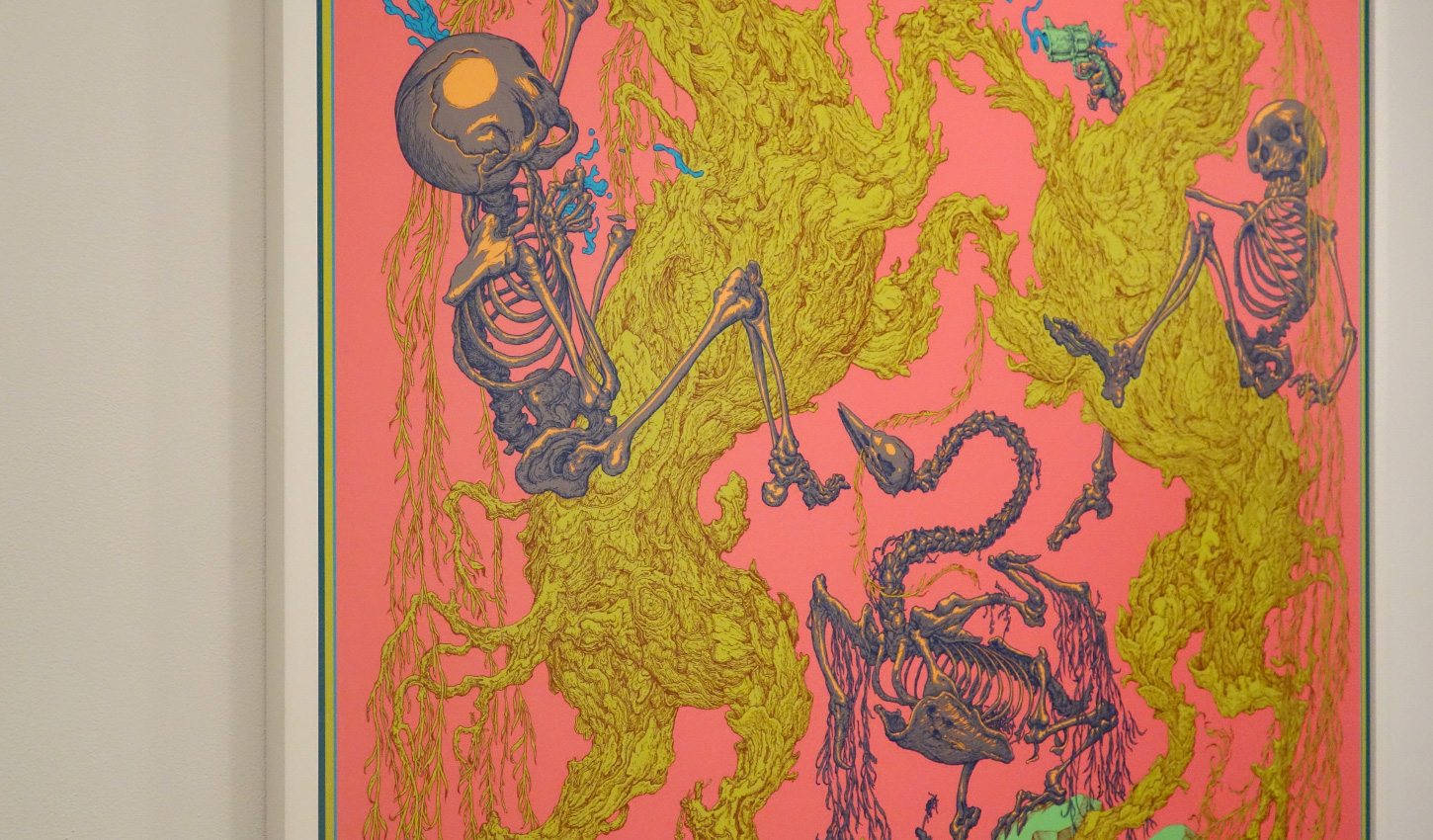 This one immediately took me back to a piece at Mike Shinoda’s exhibit: Glorious Excess. Not completely similar, but you get why I thought of it. Kinda? No? Am I crazy? Love it regardless. 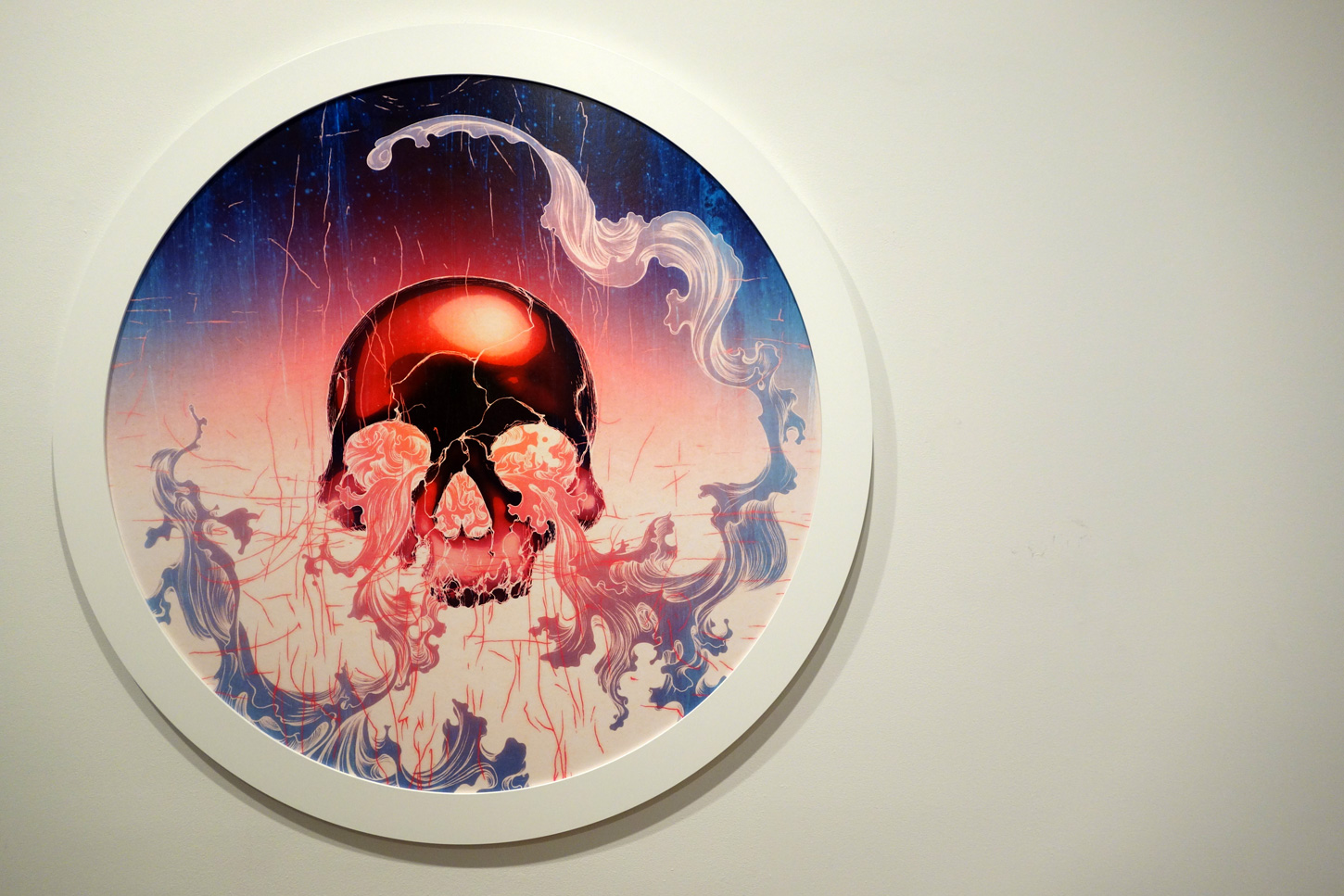 This multi-tiered painting grabbed my attention, but was not my favorite. I want to say I saw something similar in LA but I could be wrong? While I commend James for stepping outside his normal routine, it was pieces like this (and some jewelry) that made ‘Parallel Lives’ seem a little less cohesive. There were spurts of randomness that didn’t feel like it belonged. I would argue that this was one of them, but hey… maybe that’s what he was going for. 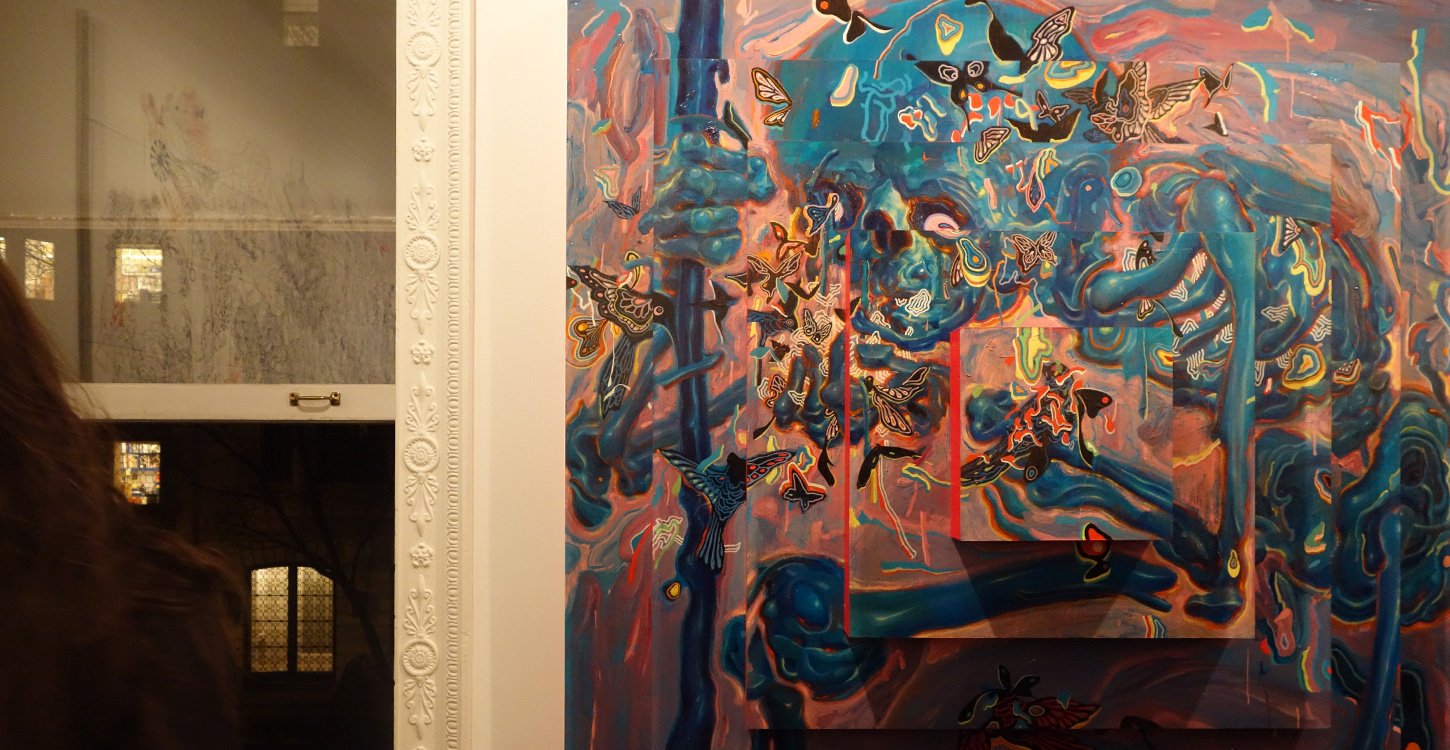 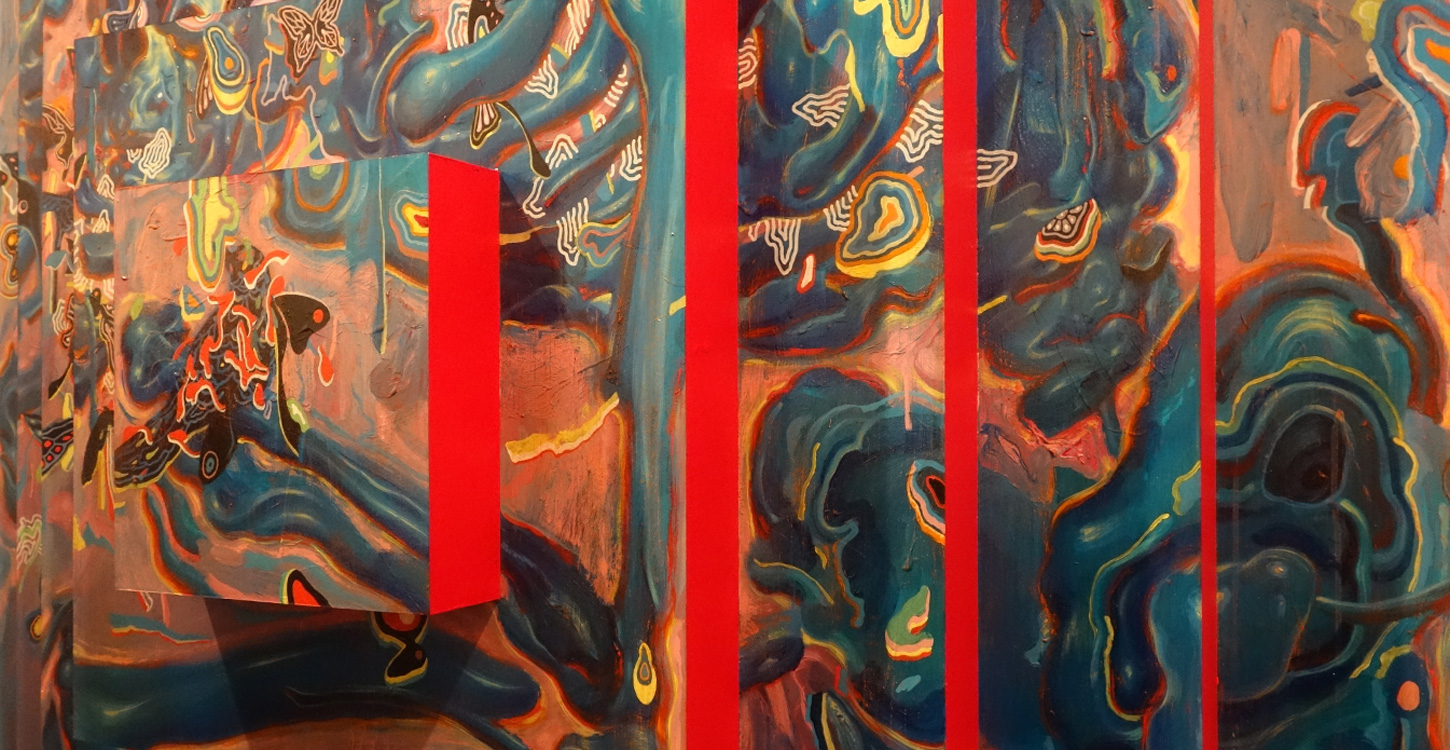 Now THIS was a favorite that I contemplated purchasing. Titled Wave (Swan), I found myself gravitating towards it more and more the longer I stuck around. To me, it’s the perfect balance of power and serenity… and the use of negative space is absolutely stunning. It also seems to embody the mix of East and West that I love so much in all my art. Truth be told, I’m still thinking about scooping it up, but with an upcoming move and travels galore lined up for the year, I should really stick to my resolution of saving more money. Then again, I also resolved to buy more art… 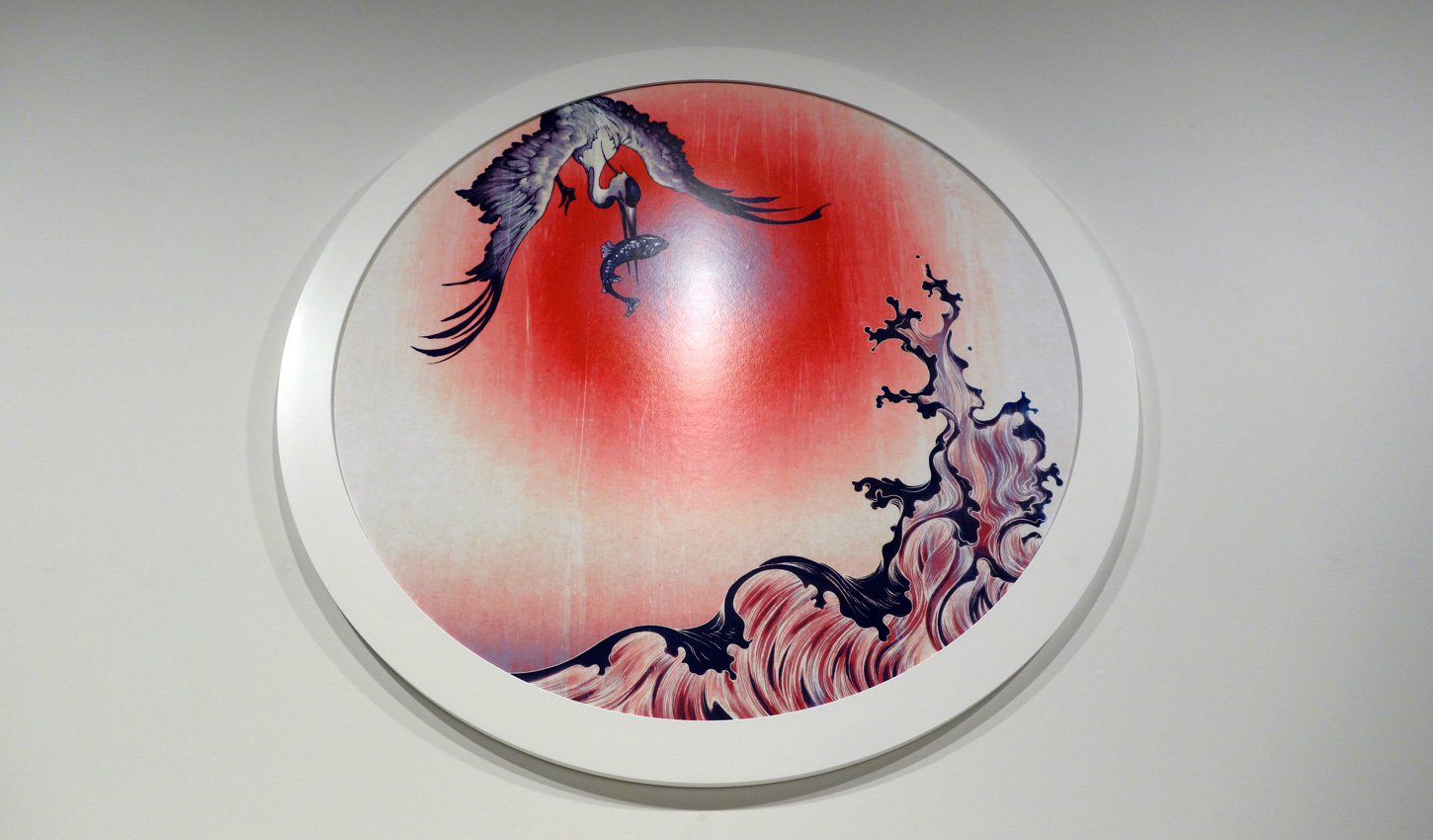 The largest installation of the evening, this piece is beyond overwhelming. While it contains tremendous intricacy and attention to detail, it falls flat in my book. It’s almost as though there’s too much to take in so I just see it and want to move on. I’ll blame that on my personal ADD and not James’ lack of artist skill or vision, haha. 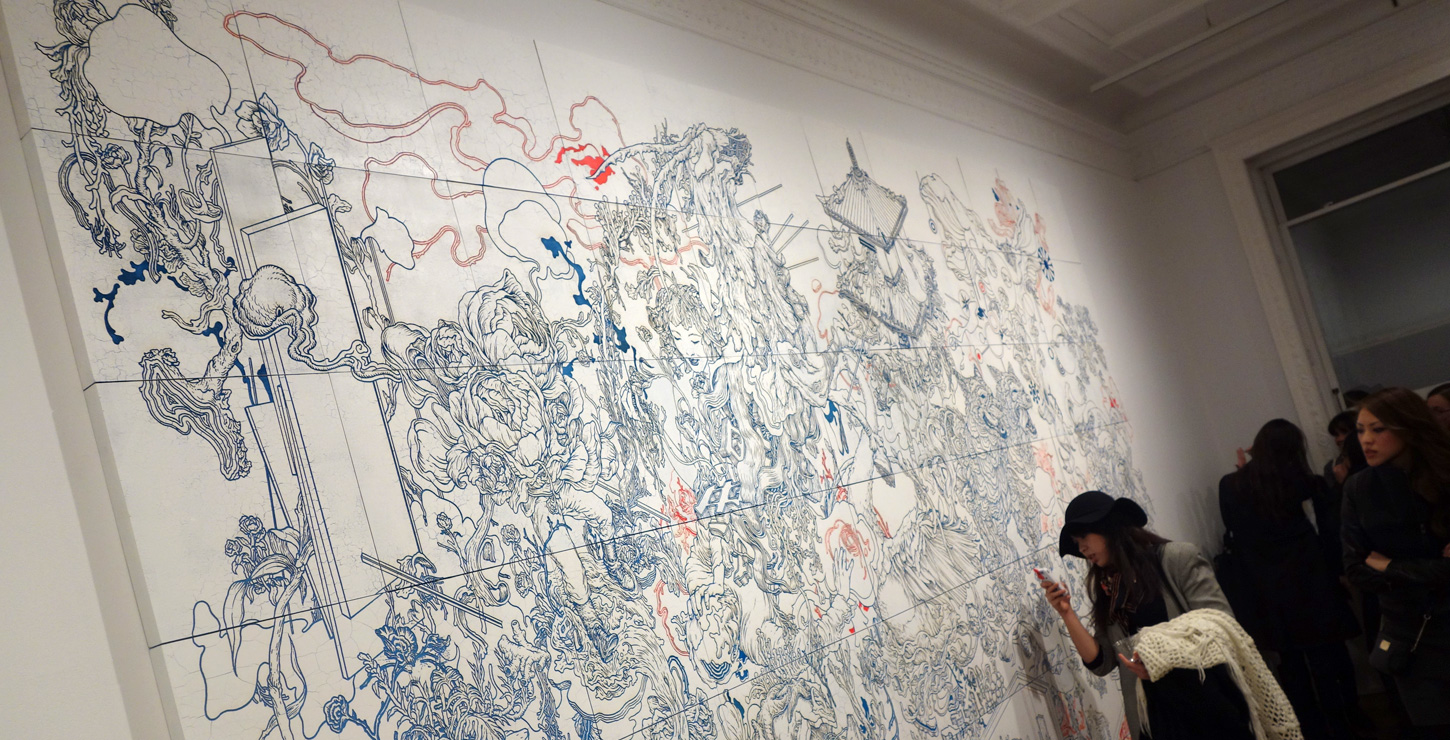 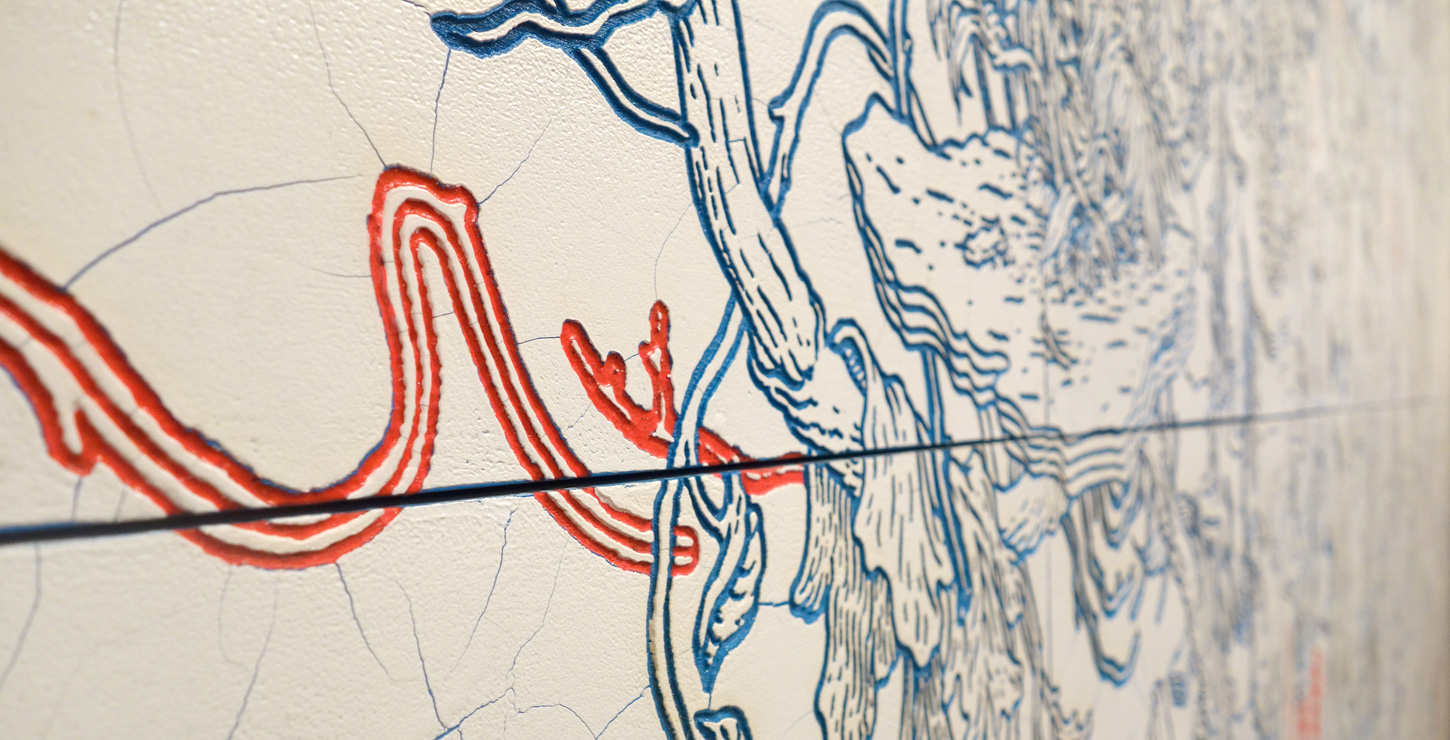 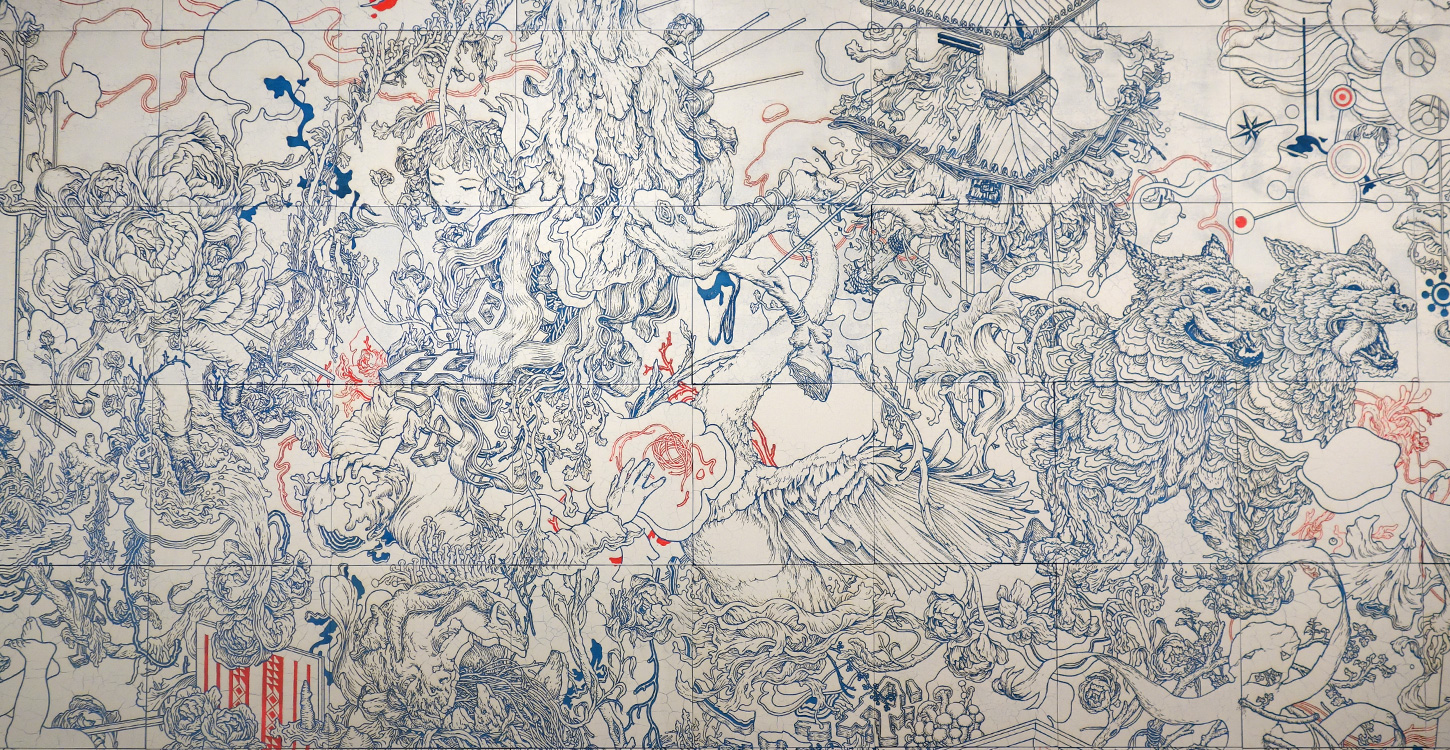 Now this piece is hands down, bar-none my favorite of the evening. It’s grandiose and beautiful, but not overwhelming. It contains complex layers but can be easily digested in one glance. The colors are a stunning, earthy mix contrasted by the white painted over the frames. The varying dimensions make it fun to decipher and every time I look at it, I see something I didn’t catch previously. The best of writing makes me feel the same way, and always makes me smile. I really, really wish I had the cash & wall space for this beauty… what a sight to wake up to every day! #INSPIRATION. 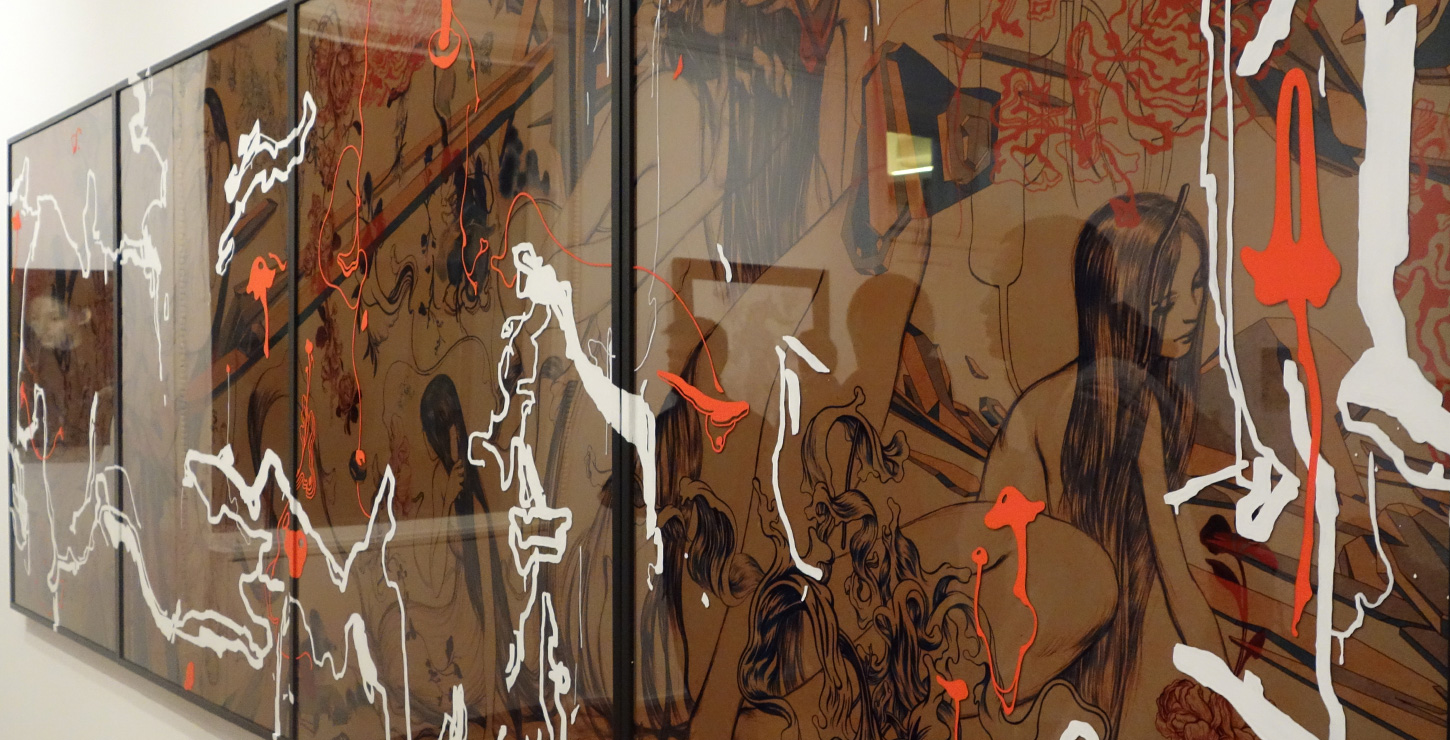 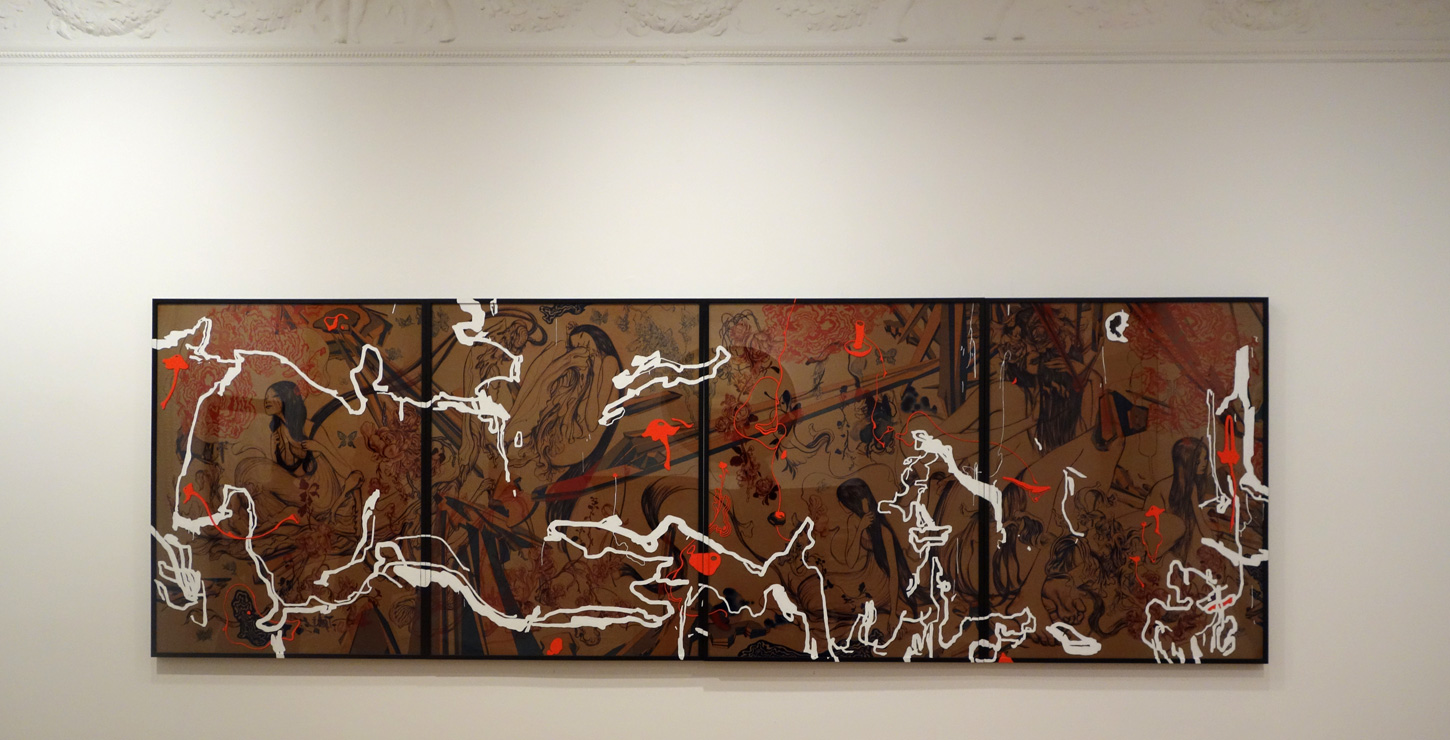