The past month leading up to the Red Bull Flugtag 2015 in Portland, Oregon has truly been adventure (http://fatlace.com/2015/07/red-bull-flugtag-2015-go-team-mcfly/); but yesterday was unreal! Especially because our journey brought us all the way to 2nd Place and also the first team of the day to beat the 2008 Portland record of 62′ (*unfortunately unforeseen circumstances cut the event short preventing 9 teams from competing)

Once again, thanks so much to all of our supporters! Although there were only 5 on the flight deck, the true champions are the countless others who came out to help build, who take care of home so we can make this happen, who donated to our Team GoFundMe campaign to help pay our credit card bills (which is actually open until the 12th!), the 86,000 people who came out to the Portland waterfront to see us fly…everyone, thank you! Also a huge thank you to my friend James who donated to represent his nonprofit organization Water Hands Hope, whose logo proudly flew on the side of our craft 🙂 onto the photos!

Remember the true champions I mentioned earlier? This is what I was talking about…some of our build team, many of whom I never would have met if we never came together to make this happen! We owe a debt of gratitude to all of them; none of this would have ever been possible without them!

This Red Bull can that I made survived the 28′ plunge into the Willamette River! 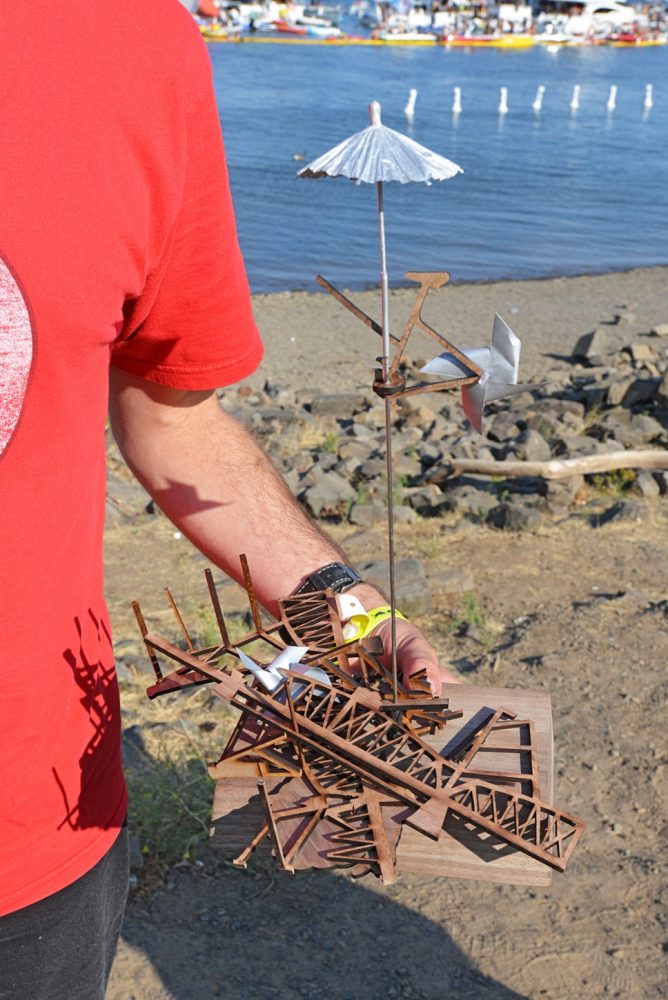 Now let’s go Back to the Future (get it?! #punny) to the earlier in the day! After one final 24+ hour build day and early morning Uhaul trips (yes…2 trips in a 26′ truck to separately haul our 24′ dihedral wing and almost to scale Delorean cart!), our Red Bull Flugtag 2015 display complete with Delorean time machine hopped up on Red Bull, Doc Brown, Marty McFly, Jennifer Parker, and 2 awesome fire suits was ready for judges and everyone else! 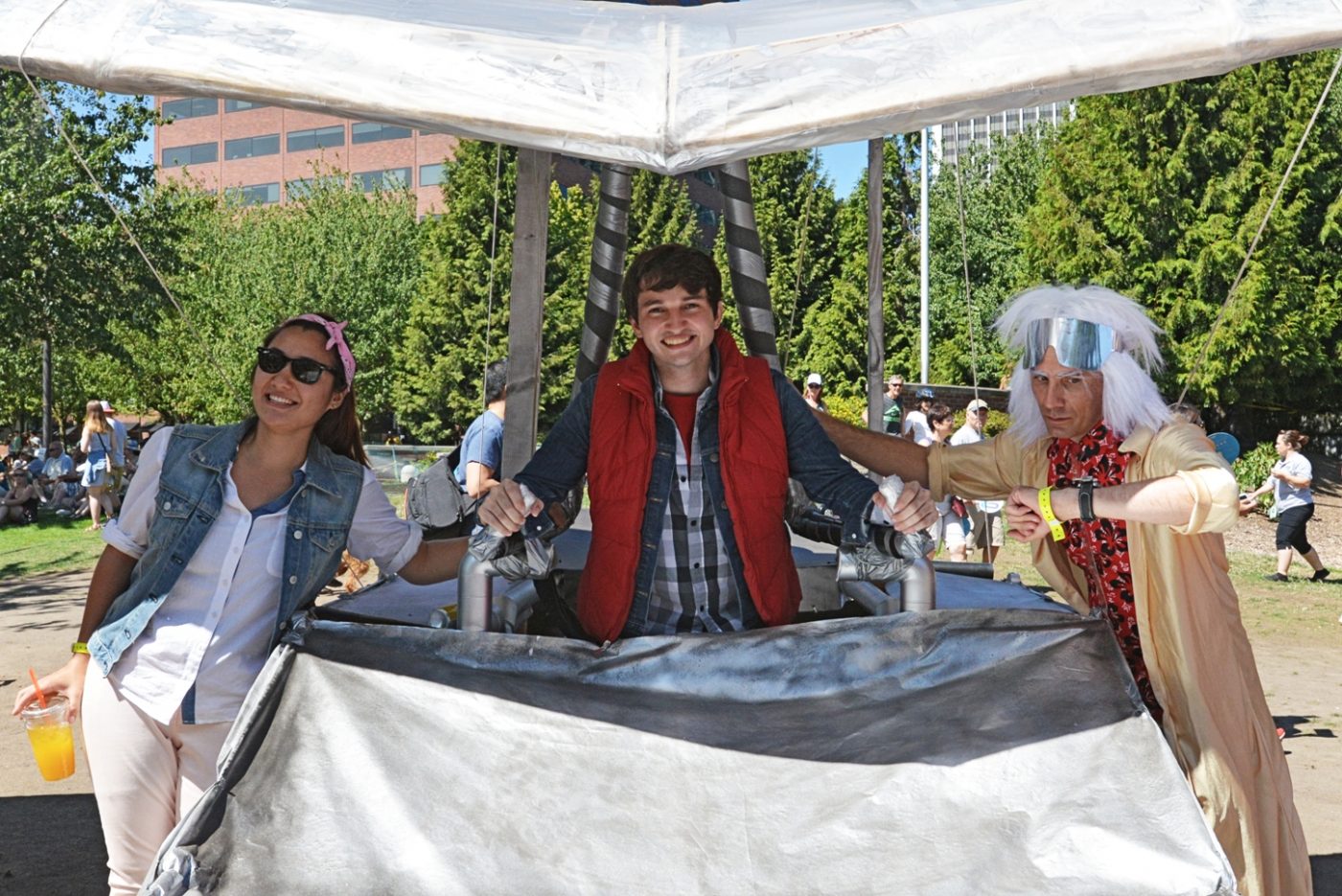 One of the many interviews throughout the day, this one with NBC/Telemundo!

It’s about that time! 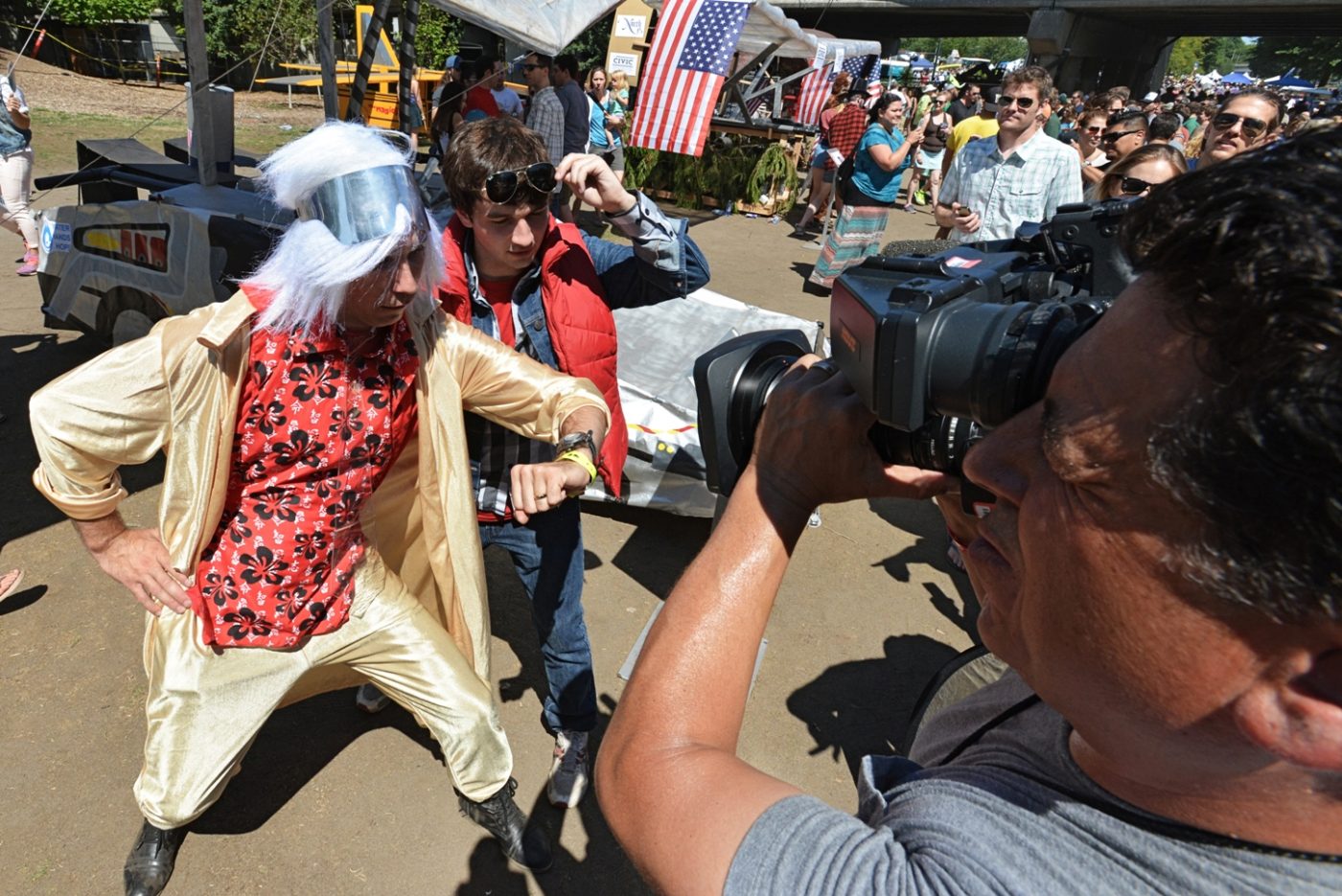 Many people didn’t see this but while we were staging before the flight deck, our wing wanted to fly away and actually came crashing down on the front of our Delorean…so huge thank you to the Red Bull crew for helping us make it onto the flight deck intact!!! For our pre-flight skit, we reenacted the closing scene of Back to the Future 1 (or opening scene of Back to the Future 2, depending on which one you like better :p)! So here’s Doc Brown pouring Red Bull into Mr. Fusion to give us extra wings!

And here’s some local media love, courtesy of KOIN 6 and the Oregonian – thanks!

^ the one time in your life that you wear a red morph suit and forever immortalized on TV and Internet! Video here http://koin.com/2015/08/01/flugtag-fun-shut-down-early-by-coast-guard/