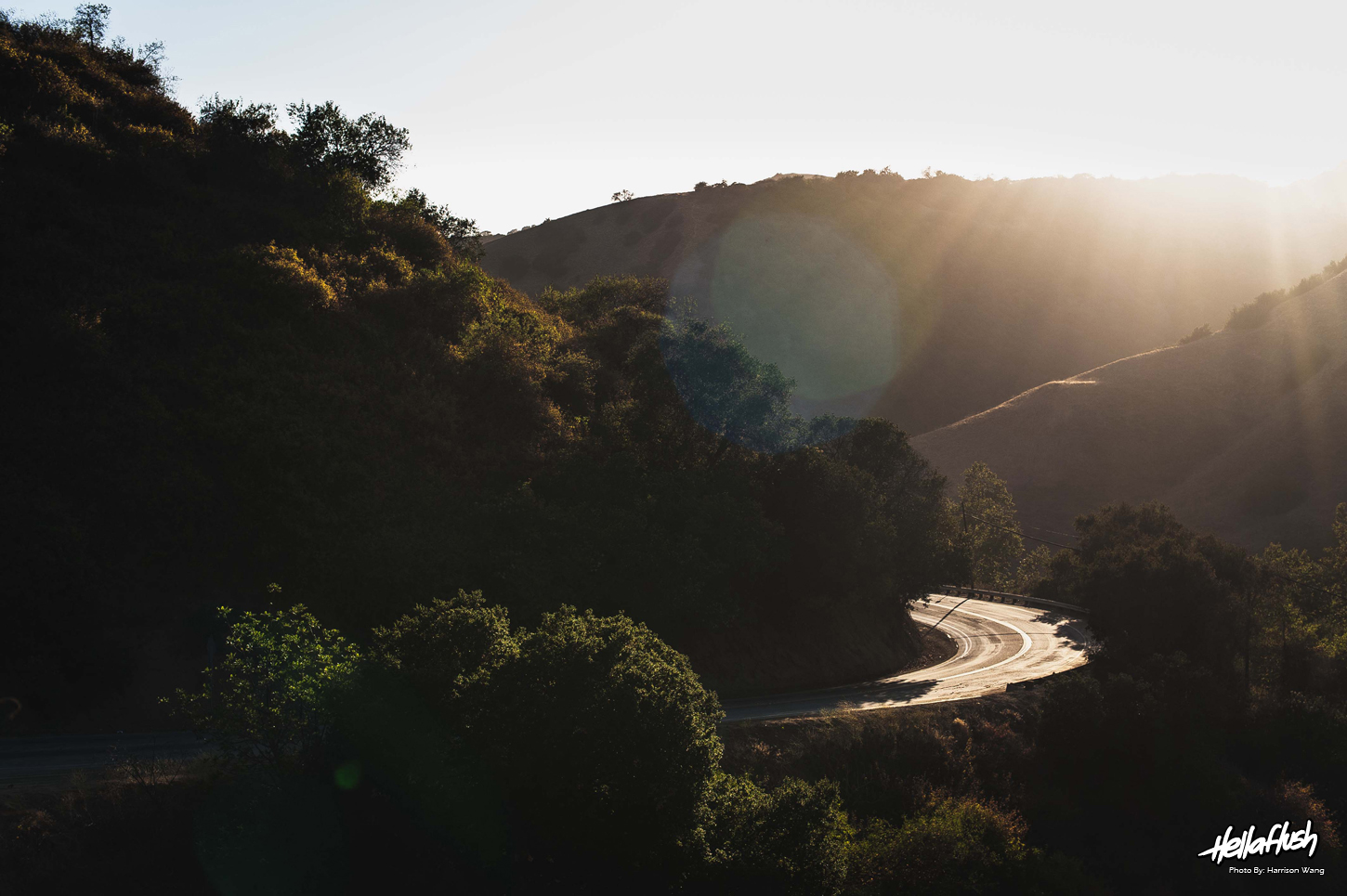 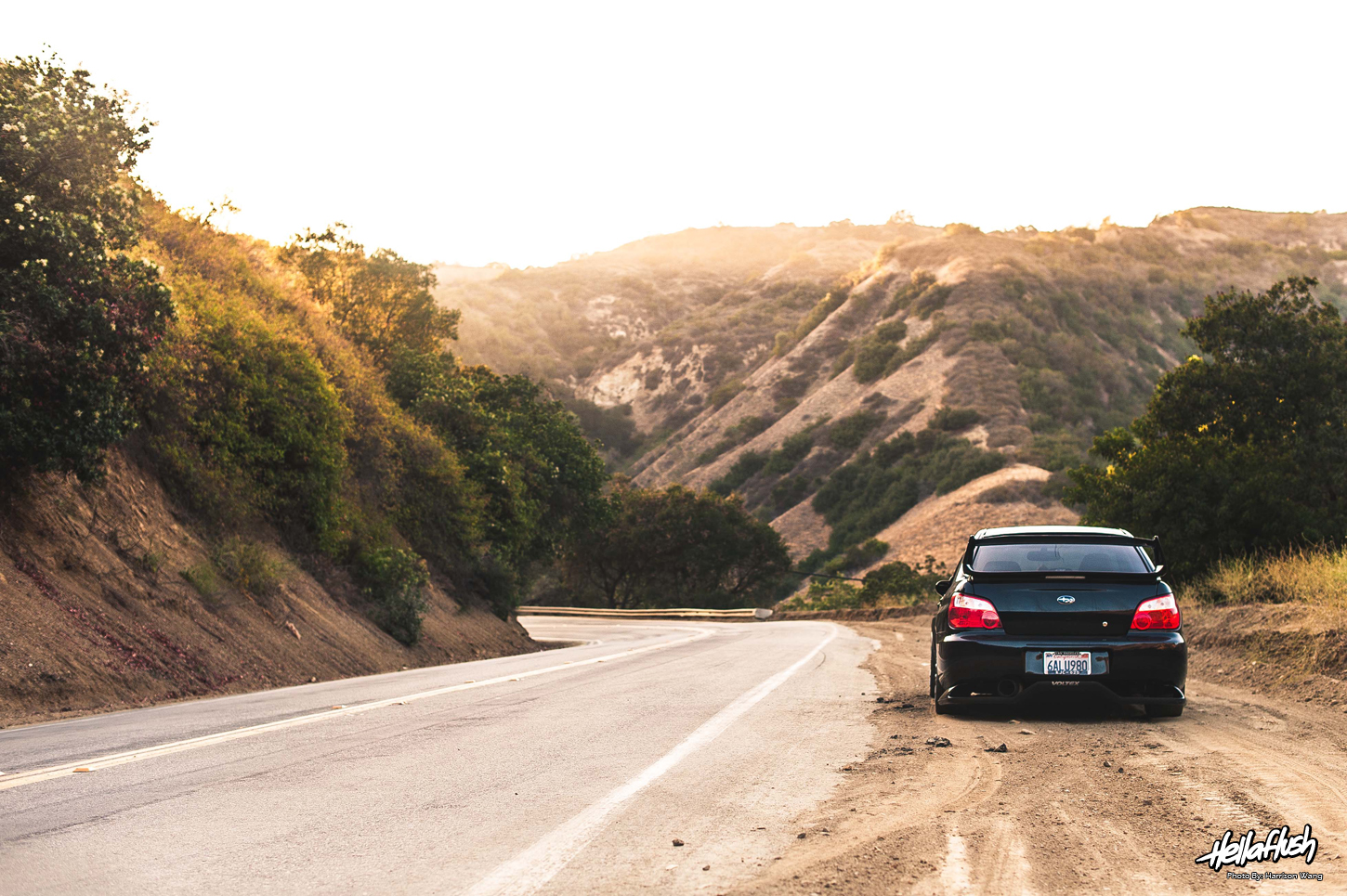 Who would have thought a random Facebook message would turn into an incredible photoshoot? I sure didn’t. Thanks to social media, connecting people thousands of miles away from each other, I was able to meet up with Andy Kuo and his 2007 Subaru WRX. This all stemmed from a message inquiring about my Volk TE37’s. Andy wanted to see if I wanted to sell my wheels from my Celica to him. I kindly refused and we started to chat. I found out that he lived practically in the next neighborhood over from me in Los Angeles. I just so happened to have a trip planned out there for the next weekend for a wedding. Next thing you know, we had a photoshoot set up and met up at the Krispy Kreme by the mall right before sunset. 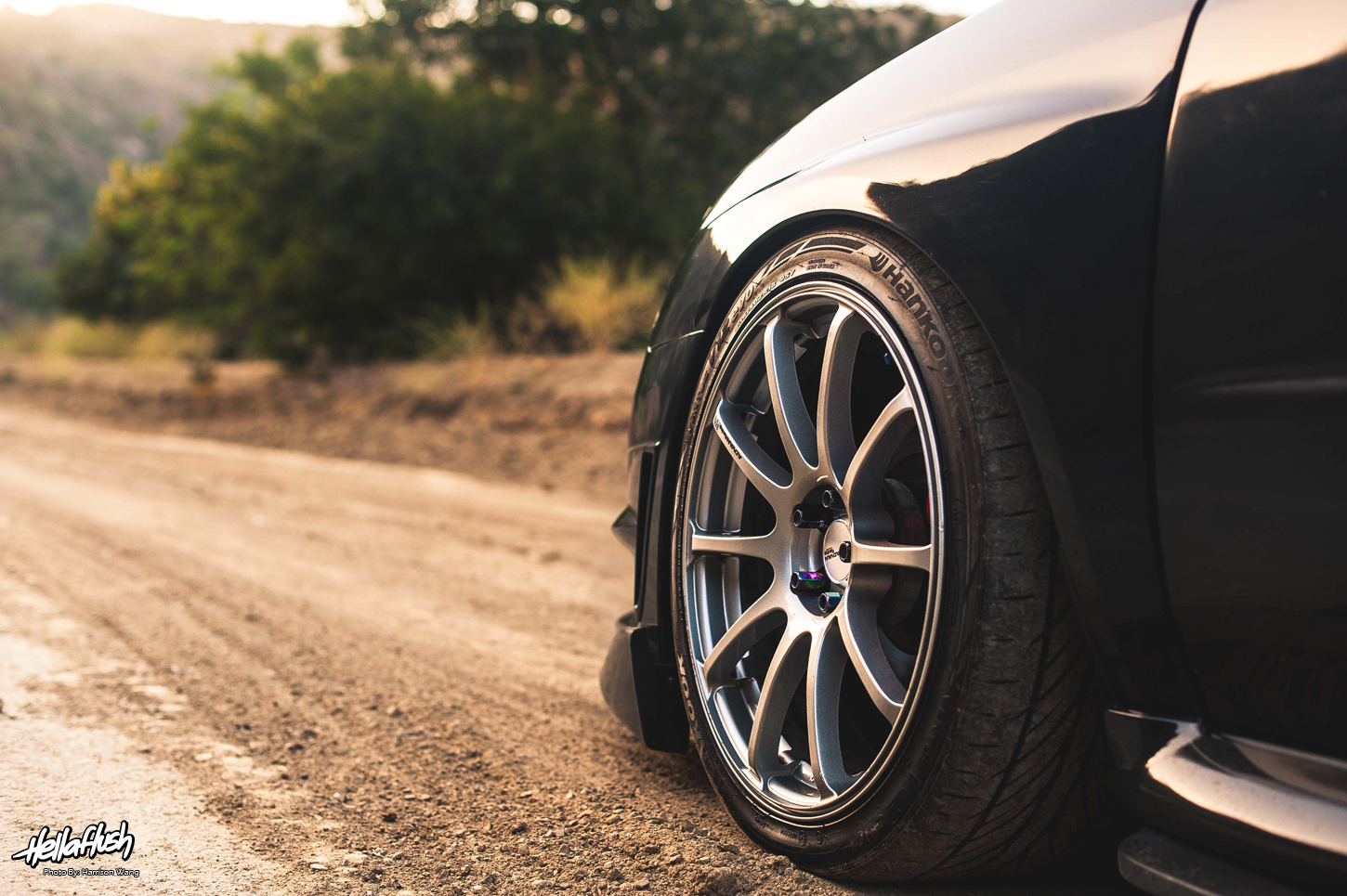 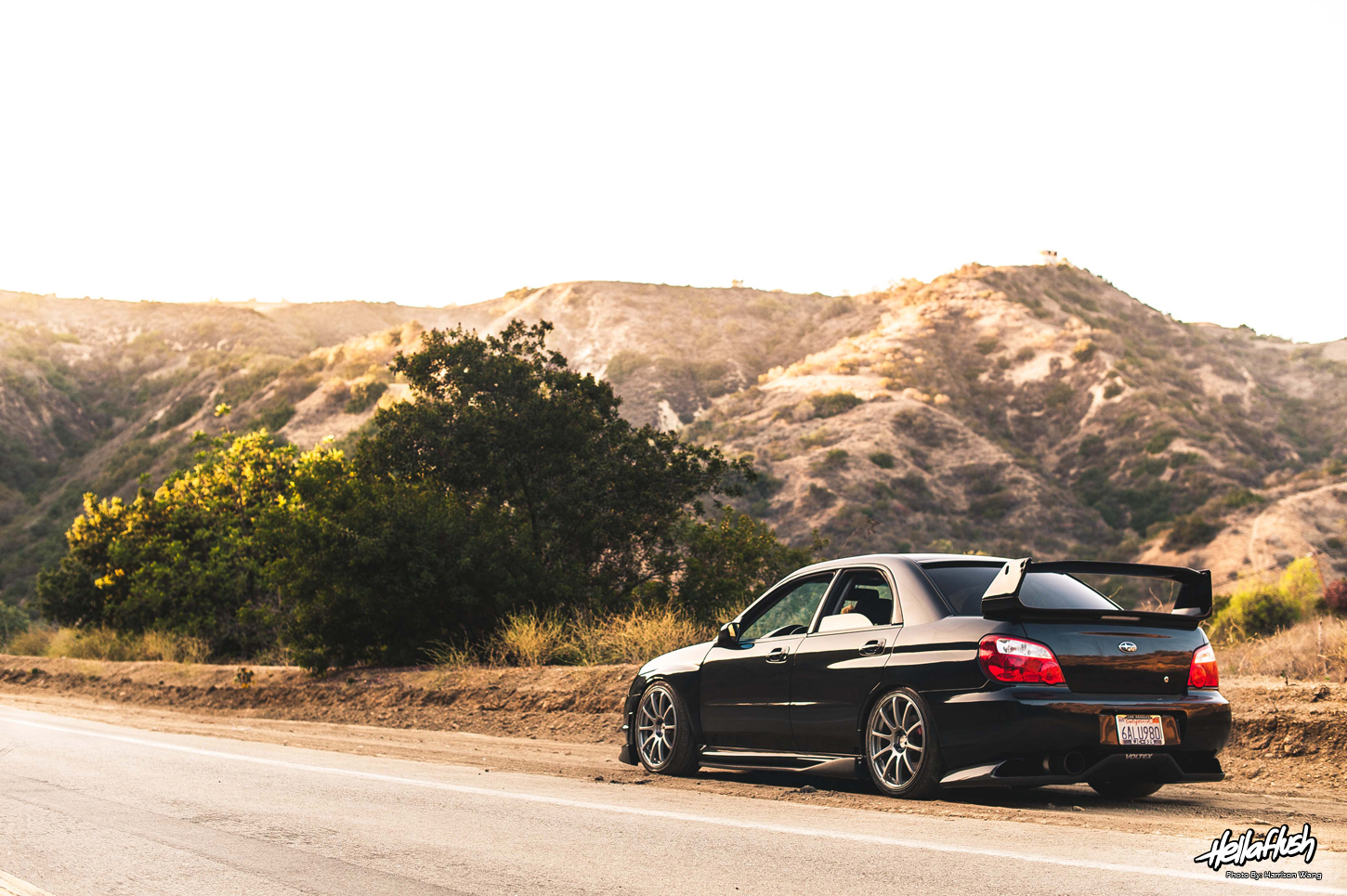 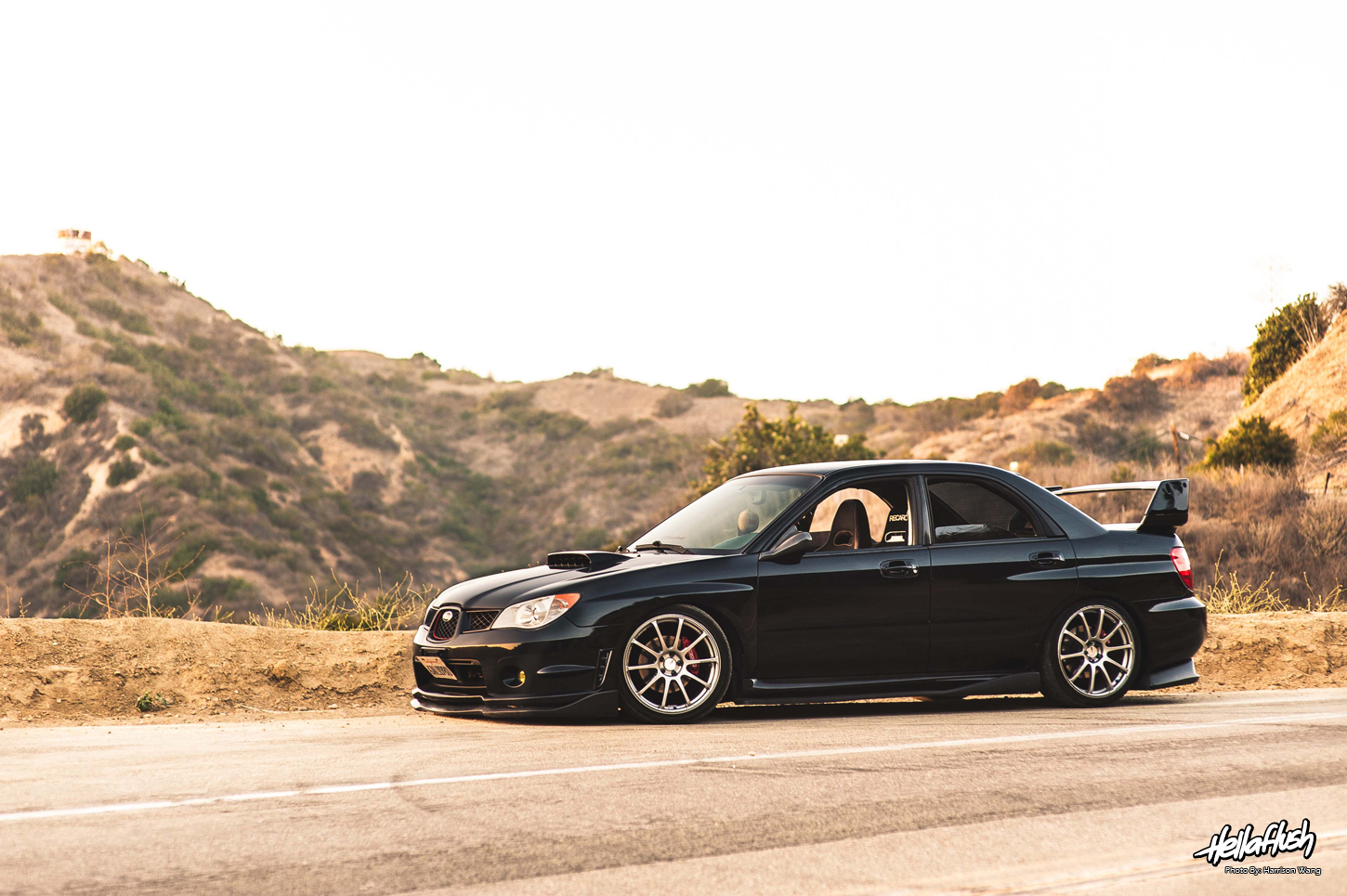 Riding up the mountain was an experience in itself. In Houston, it’s extremely flat and I don’t see that changing anytime soon. Andy took me up the mountain knowing that I haven’t had the pleasure of being able to experience this, and let me tell you it was done a lot faster than normal. Needless to say, it was a blast. The mixture of taking tight corners and hearing the turbo spool is an experience I wish everyone will someday live for themselves. I felt like I was in the moment of Tokyo Drift where they are drifting the mountain pass at night. It took us no time to get to the top of the mountain and the sight was breath taking. We drove up and down the mountain pass hoping to find the perfect spot pulling over occasionally to see what would work. We finally found the most ideal location but the sun was still too high so we just chit-chatted for a bit while waiting around. Cars passed with people staring and we even got a drifter roll by showing off. Unfortunately because of the drifter, we ended up attracting the attention of the police and got kicked out of our spot. But being used to this, we just did a full loop and came right back up! By the time we got back, the sun was just setting over the mountain ridge and the background was perfect. 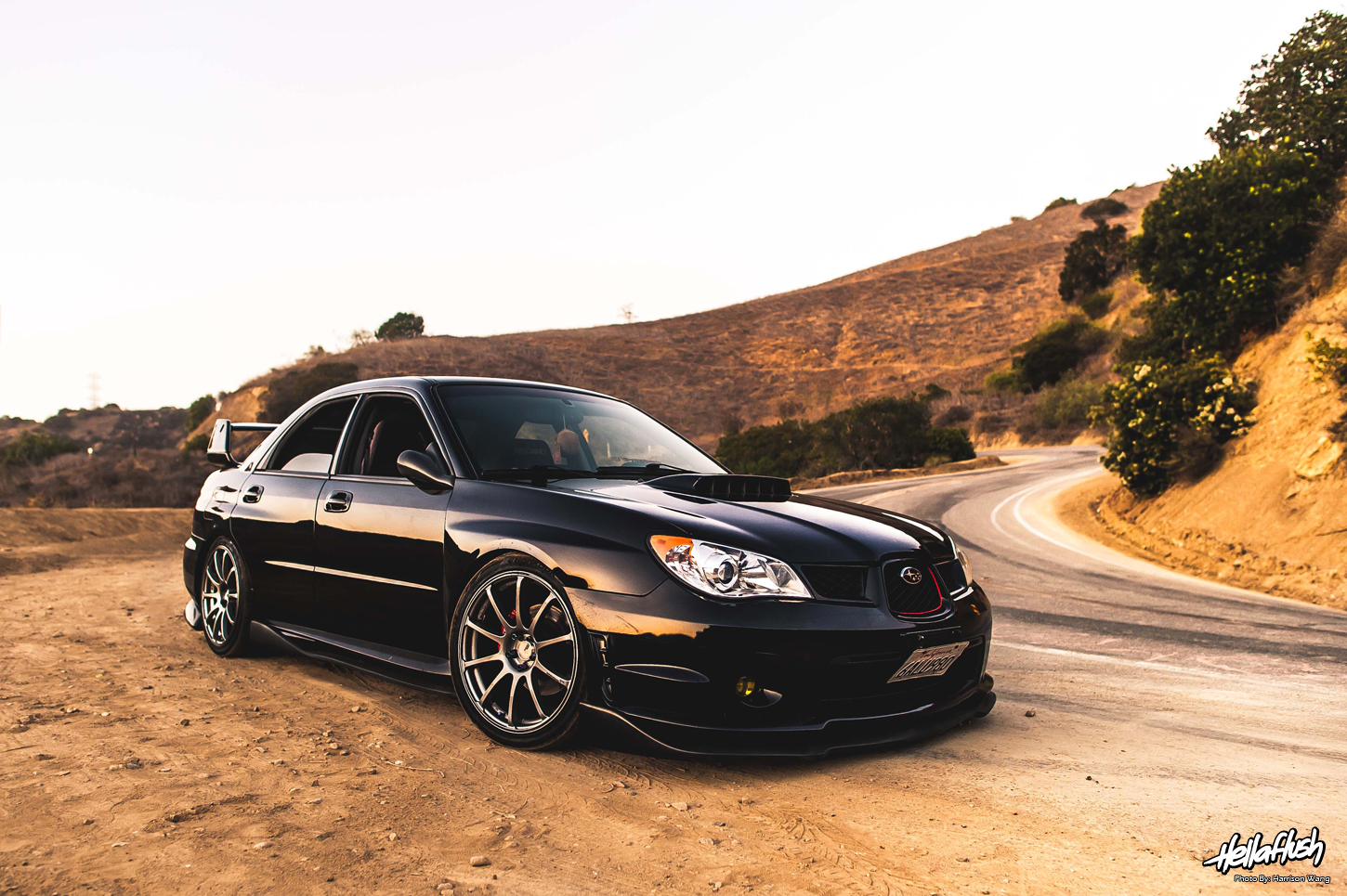 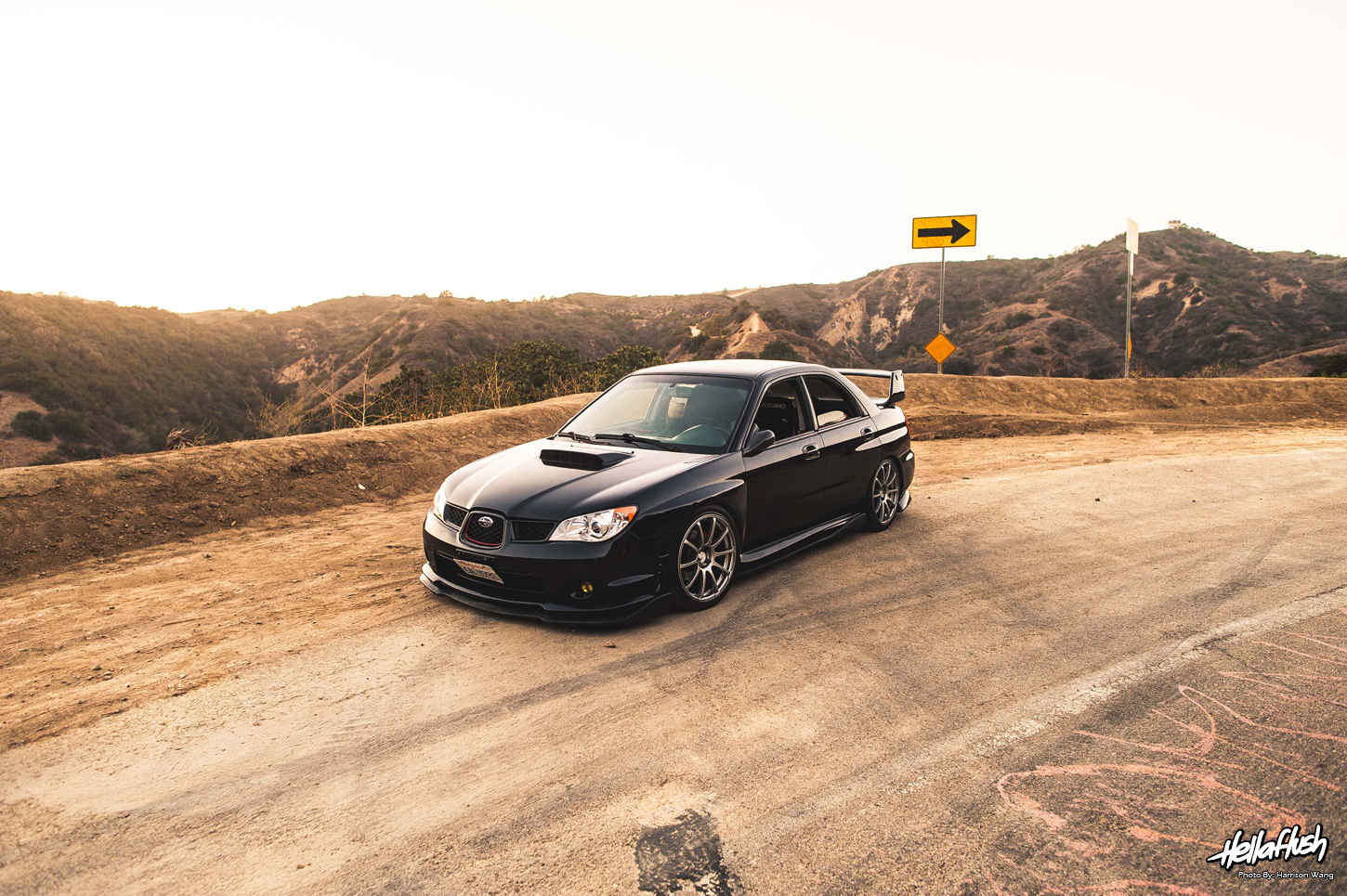 The amount of time and dedication that Andy has for his WRX is unparalleled to what the scene has now become. It is refreshing to see a person’s love for his car and a true and genuine love for the scene. The entire encounter with him left me appreciative of the people that still put everything that they have to offer into something that’s not just a hobby, but is truly a lifestyle. I’m sure you always hear that the automotive scene is a lifestyle and not a hobby, but it isn’t until you live it, breathe it, and even dream of it that you UNDERSTAND how much truth it holds. I feel like today’s scene has been oversaturated with people that no longer have respect for it. Maybe it has always been like that and I’ve just come to light at this moment, but either way, it is still a sad realization. Everyone is always talking about how their car is faster, or better, or how it is going to leave you in the dust. What happened to just respecting each and every build for what it is? Everyone has their own taste, style, and uniqueness to their vehicle. Remember that giving respect will earn you respect. 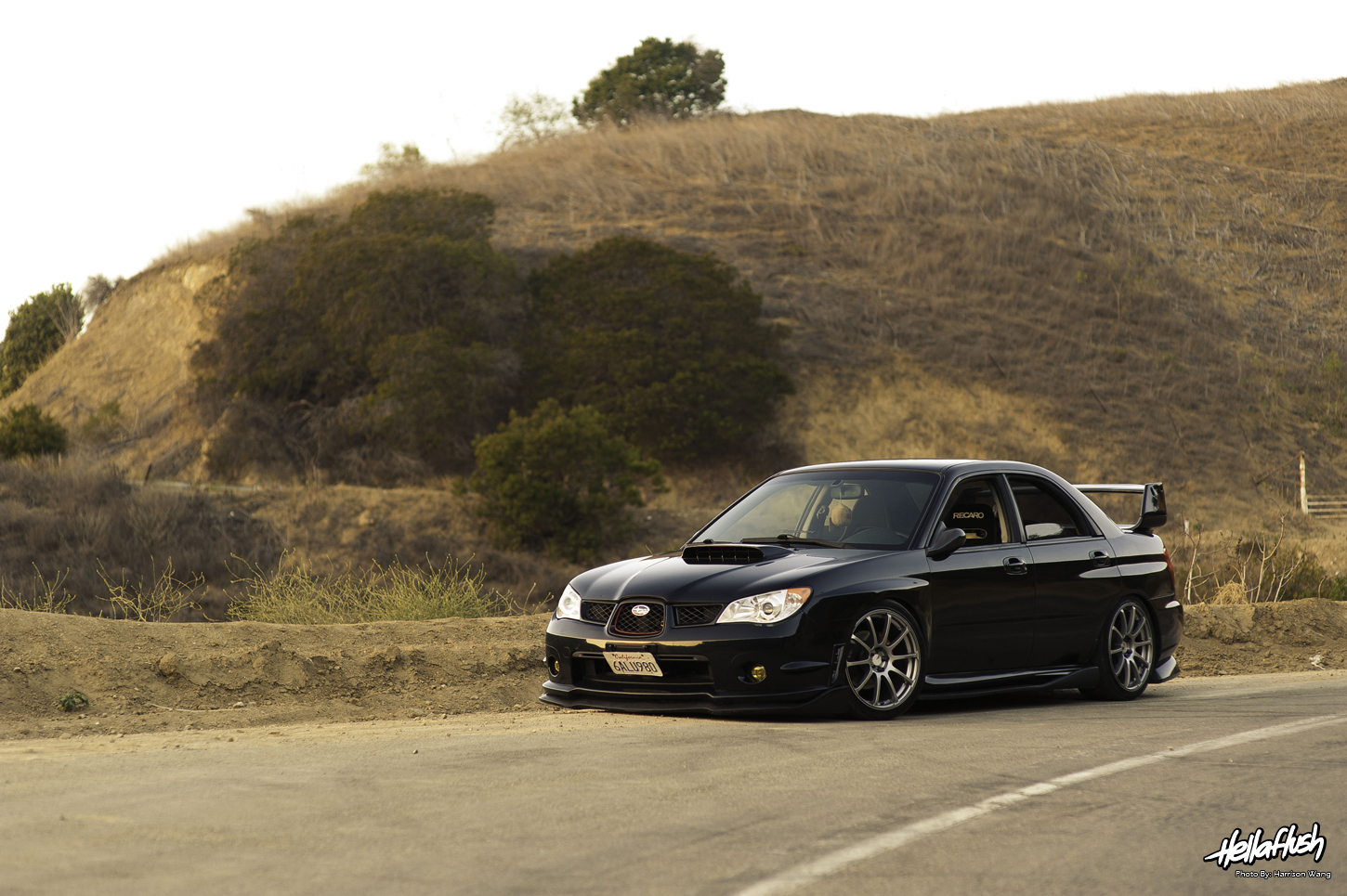 Anyway, back onto topic here, let’s get back down to business and talk about Andy’s car. His mod list is extensive, to say the least. As you already know, it isn’t a STI and just a regular Impreza WRX. His WRX is YimiSport Protuned and is pushing out a whooping 302whp/324tq @ a conservative 17 PSI. He dailies his car back and forth from home to wherever else his heart desires. This car is no trailers and garage queen to say the least. The source of his power comes from a mixture of his ported/polished VF39 and STI TMIC with the Prodrive cold air intake and USDM STI Genome Axleback exhaust. He never imagined that he would go with an external dump wastegate setup but ended up undertaking it which he considers a huge milestone. And just to mention a few other parts, his PDE downpipe, walbro fuel pump and grimmspeed EWG with tial dump tube setup contribute to this beast of a machine. To go along with all this power, his suspension is set up so that he can go drive on the mountain that I had the pleasure of experiencing at a moment’s notice. He is riding on 18×8.5 +48 Advan RS’s paired with BC Racing BR coilovers. To help stiffen the rest of his chassis he also has a cusco rear swaybar, cusco rear subframe brace, and several other things as well. With trimmed, rolled, and pulled fenders, he has no problem driving the way he wants. His Voltex rear diffuser gives his WRX that slightly more aggressive look to back what he’s got packing – not to mention, it’s functional as well. His Chargespeed sideskirts and lip compliment his carbon fiber mirrors that give it a slightly sportier look but still clean. Although it isn’t pictured, he just recently installed his Cusco 6 point roll cage and took out his passenger seat. Right now he’s riding solo with his Recaro bucket seat (his girlfriend is not very happy. HA!). His car is nothing short of impressively clean but has a beautiful essence that makes you do a double take. Andy builds his car to encompass a symphony of mods, where it would embody a full balance of parts, covering aero, suspension, power and interior altogether. He tries to achieve his ideal goal of a clean, classy, yet functional time-attack/track themed daily driver. I know it left me with that impression. After we finished our shoot, we got to have some one on one time over dinner at Ten Ren’s Tea Time in Diamond Plaza. At this point, we knew that we were cut from the same cloth but just reside in opposite sides of the nation. It is crazy how you can connect with some people so quickly just by sharing one passion which carries over to another. Hours went by with conversation on cars, music, hobbies and just life in general – next thing you know, it’s dark out and it’s time to go. His outlook on the automotive scene is eerily similar to my thoughts and ideas. He definitely things that the scene is changing and developing – in a good or bad, we couldn’t decide. It’s nice to see how passionate new tuners are but they need to keep their arrogance to a minimum. People need to stop feeling so entitled to have your car shot or featured in something just because you have spent the most money accumulating the rarest and most expensive parts. At the end of the day, the car build is your own. YOU have to live with it and drive it. Why build a car to make other people happy, to follow the bandwagon, or just to make a feature? If that’s what floats your boat, by all means, go right ahead. But lately it is becoming too common to see a car enter the scene with all available parts within weeks, only to see it disappear in a couple months after a show season. What happened to the fulfillment of wanting to build a car to love and appreciate? Where is the sense of pride of knowing you took the time to find the right parts and work on your car yourself instead of dropping it all off at a shop? I like to get down and personal with my car when I can. I remember buying parts and putting them on with enjoyment so I can fully understand my ride. I’m not going to say I can do everything and anything, but I’d like to know how my car operates or functions. Don’t you? To make this conclusion short, this has been the best photoshoot up to date. It will probably go down in my book as one of the best experiences in my life. My passion and love that is behind the car scene is once again rekindled and reignited. There is still hope that people will continue to feel the same way that Andy and I do. As long as we take the initiative to pass down our thoughts and feelings with the young blood incoming, I think we’ll be okay. The love will never fade. Sometimes even though the light burns low, everyone once in a while you’ll find something that adds fire to the fuel. At the end of the day, you don’t have to agree or disagree with what I’m trying to say, but just understand another perspective if you haven’t already.