The second of two project vehicles from the past year was a Toyota FJ Cruiser for a new client, Scosche Electronics. The first project was a Subaru STI that debuted at SEMA back in November. The FJ Cruiser made its debut at the Consumer Electronics Show (CES) just a couple weeks back. The build took a couple months to put together and a couple more months of proper planning as we collaborated with surf brand, Hurley, on the project. 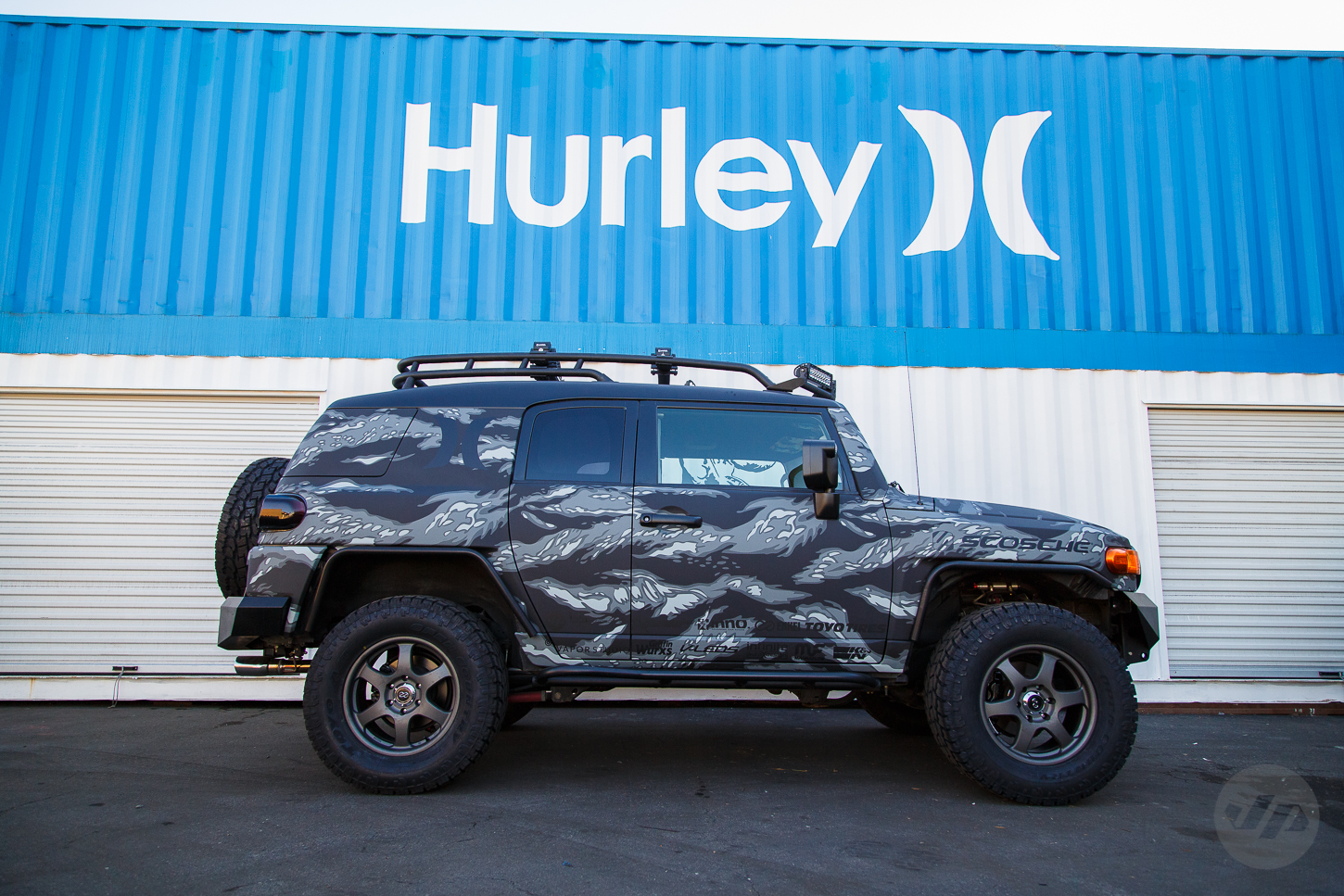 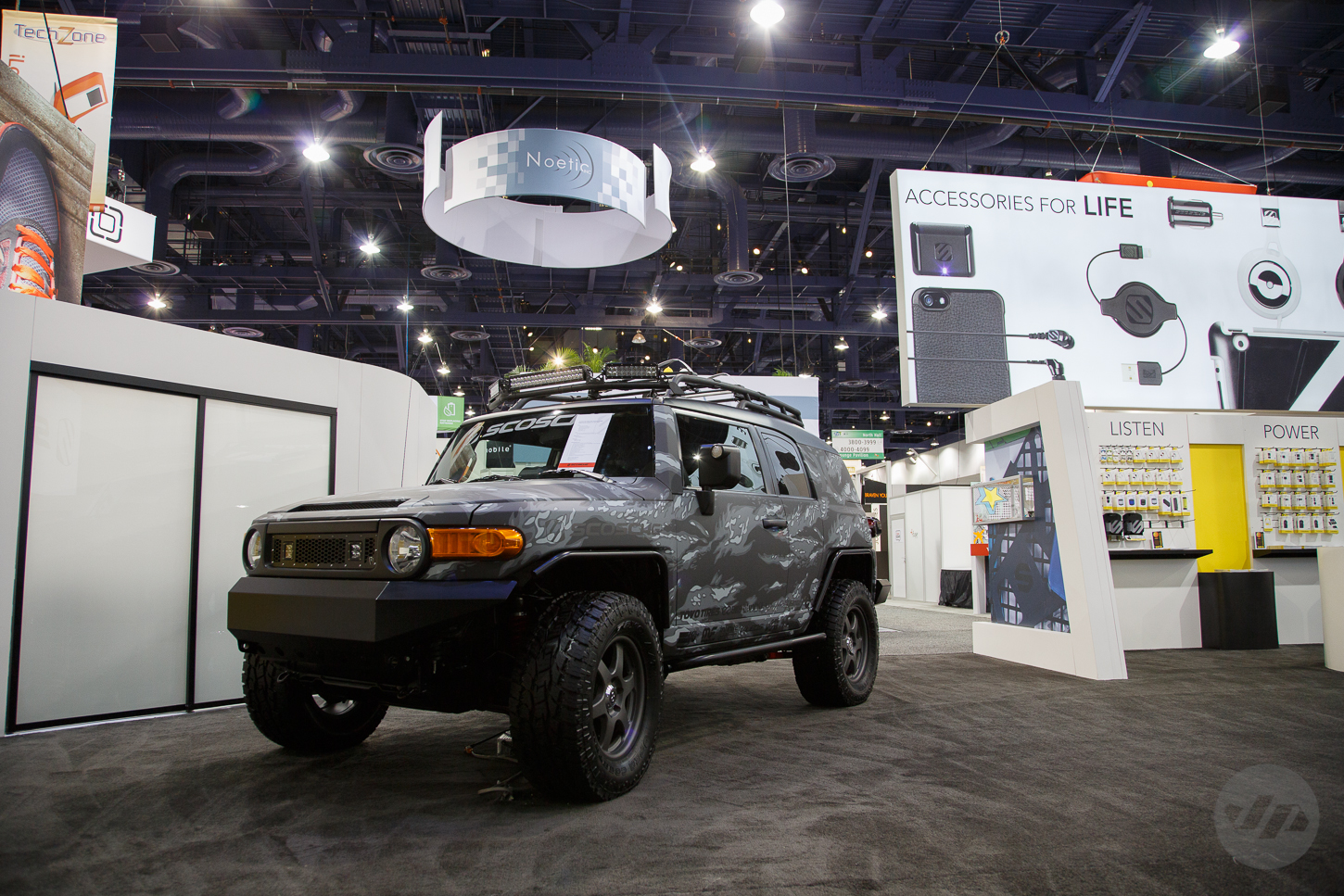 Working with Hurley was a dream come true as it is one of the most innovative brands. As a sister company to Nike, Hurley is always on the cutting edge when it comes to products, design and style. With the help of design agency, Livery Production Gruppe, I was able to work with the brand to incorporate their “Flammo” design concept, which is a play on the words Floral + Camo into the build. The exterior of the FJ is wrapped in a ultra matte Hurley tiger camo, while the interior is a combination of black alcantara and leather mixed with Hurley’s aloha floral print. The material for the Hurley aloha print comes from their SIMA award winning board shorts that feature the same tiger camo and floral details. 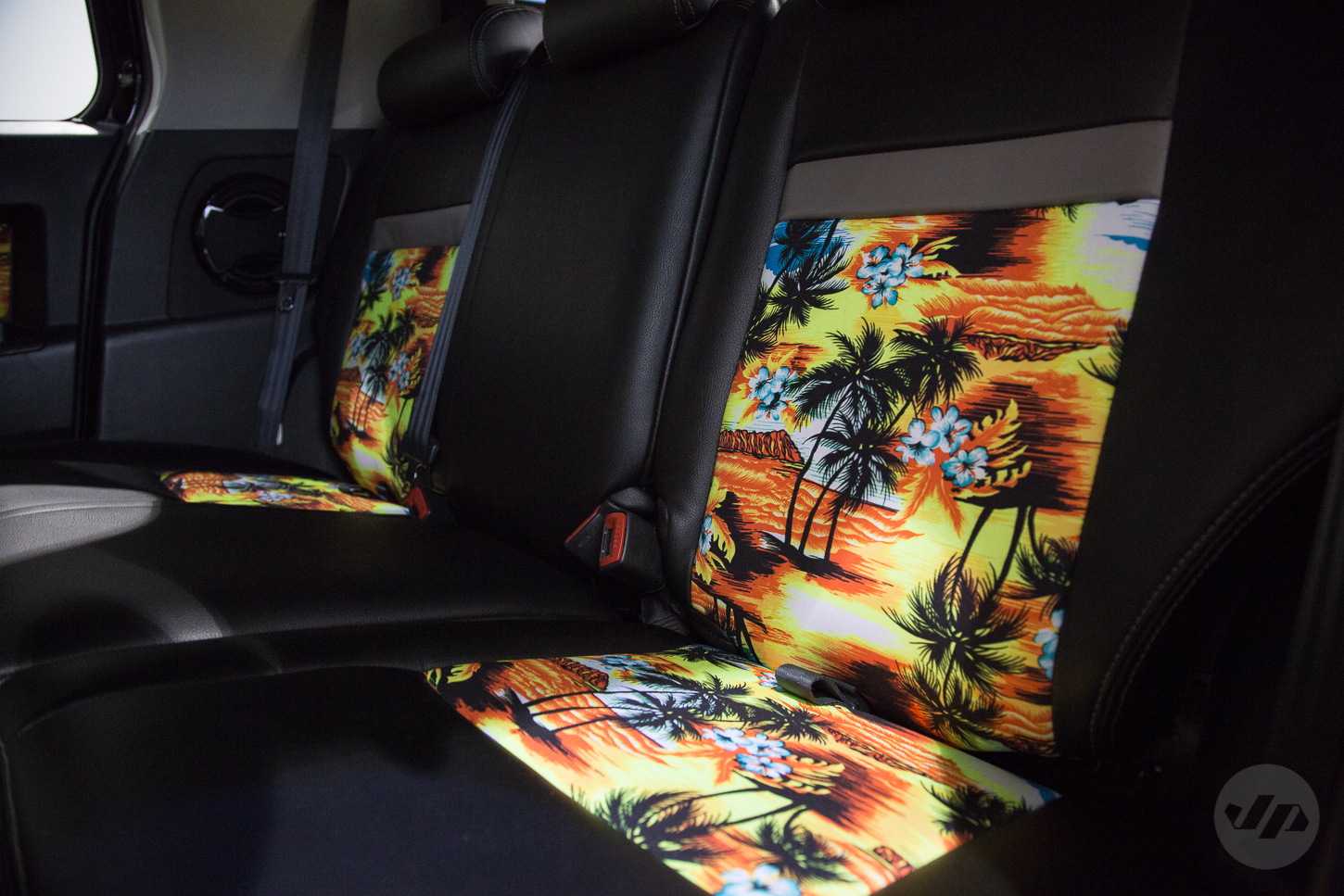 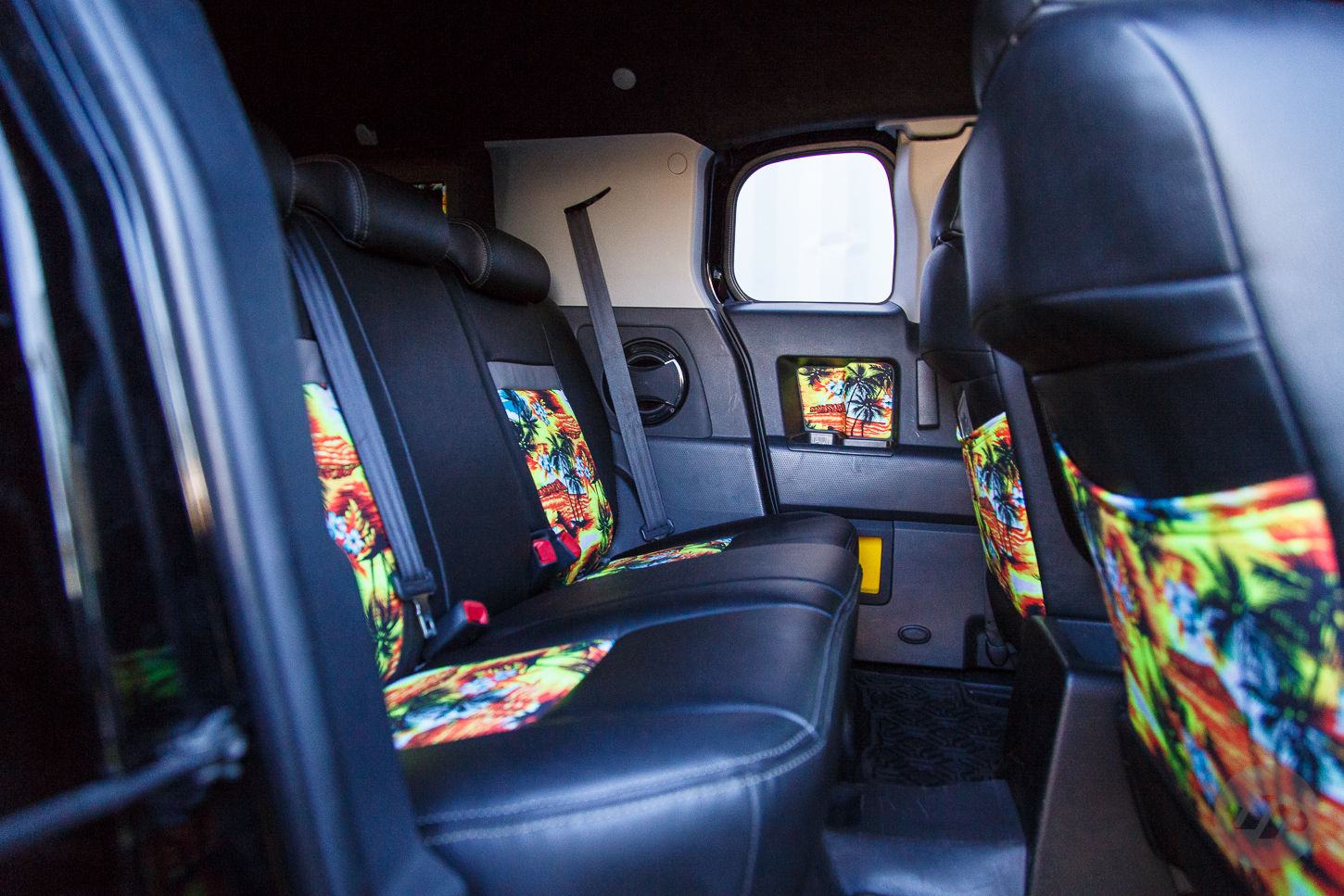 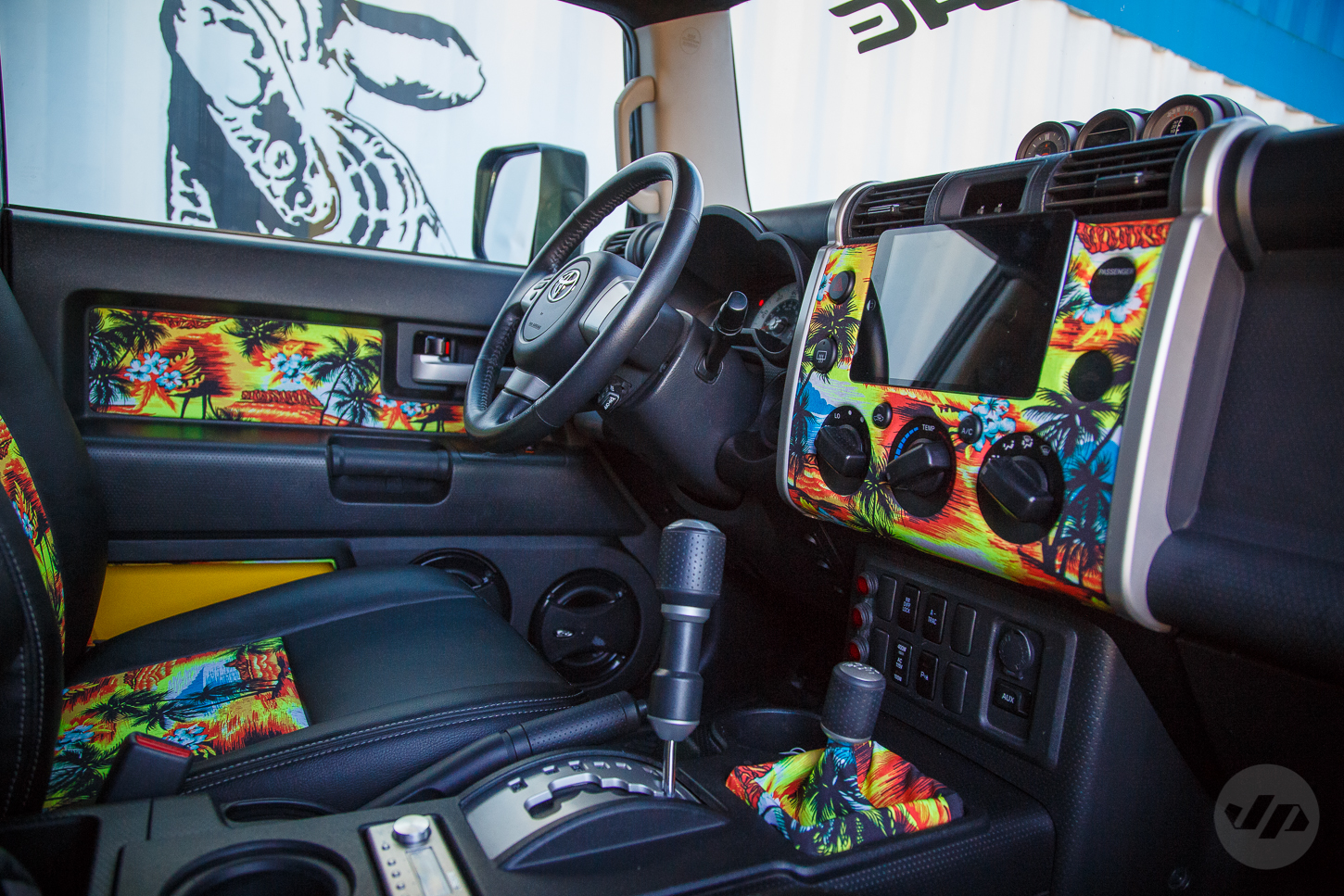 The overall concept of the vehicle was created in collaboration with Scosche and my friends at Vapor Studio. The goal was to create a show-stopping vehicle that would turn heads, while promoting the products and lifestyle of the brand. Functionality was key as this vehicle will go on tour and will be a key asset in their marketing and sales campaigns. The interior is a key component in showcasing the product offerings of Scosche, which include both car audio and consumer electronics. The EFX line of speakers, wiring, amps and subwoofers were selected along with the most current head unit that is also bluetooth compatible and equipped with wifi. 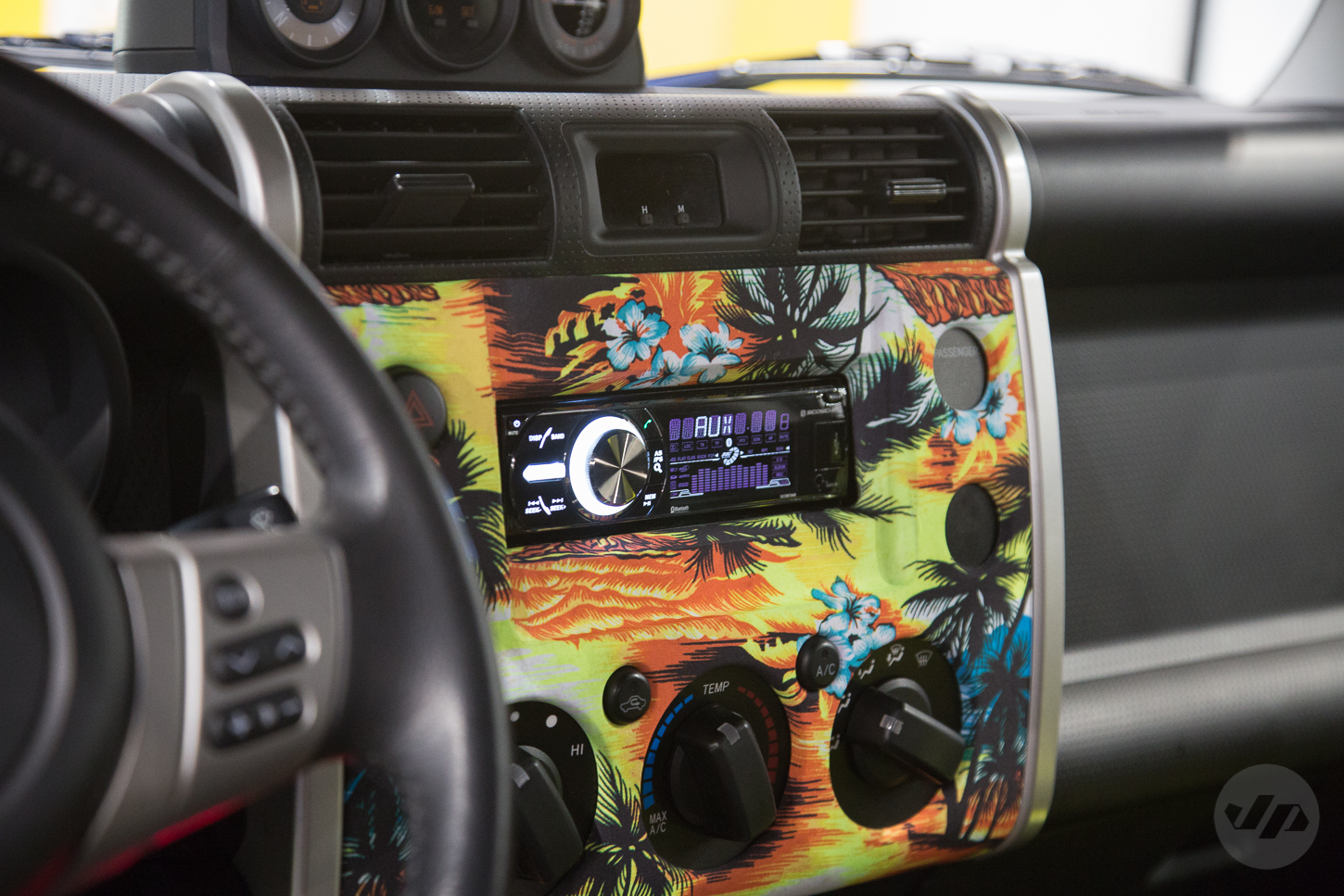 To modernize the dash, BP Autosound, added an iPad mini and integrated it to work as a remote via bluetooth the entire system. BP also added VLED lighting to the custom door panels that serve a dual purpose of displaying products and adding style to the interior. 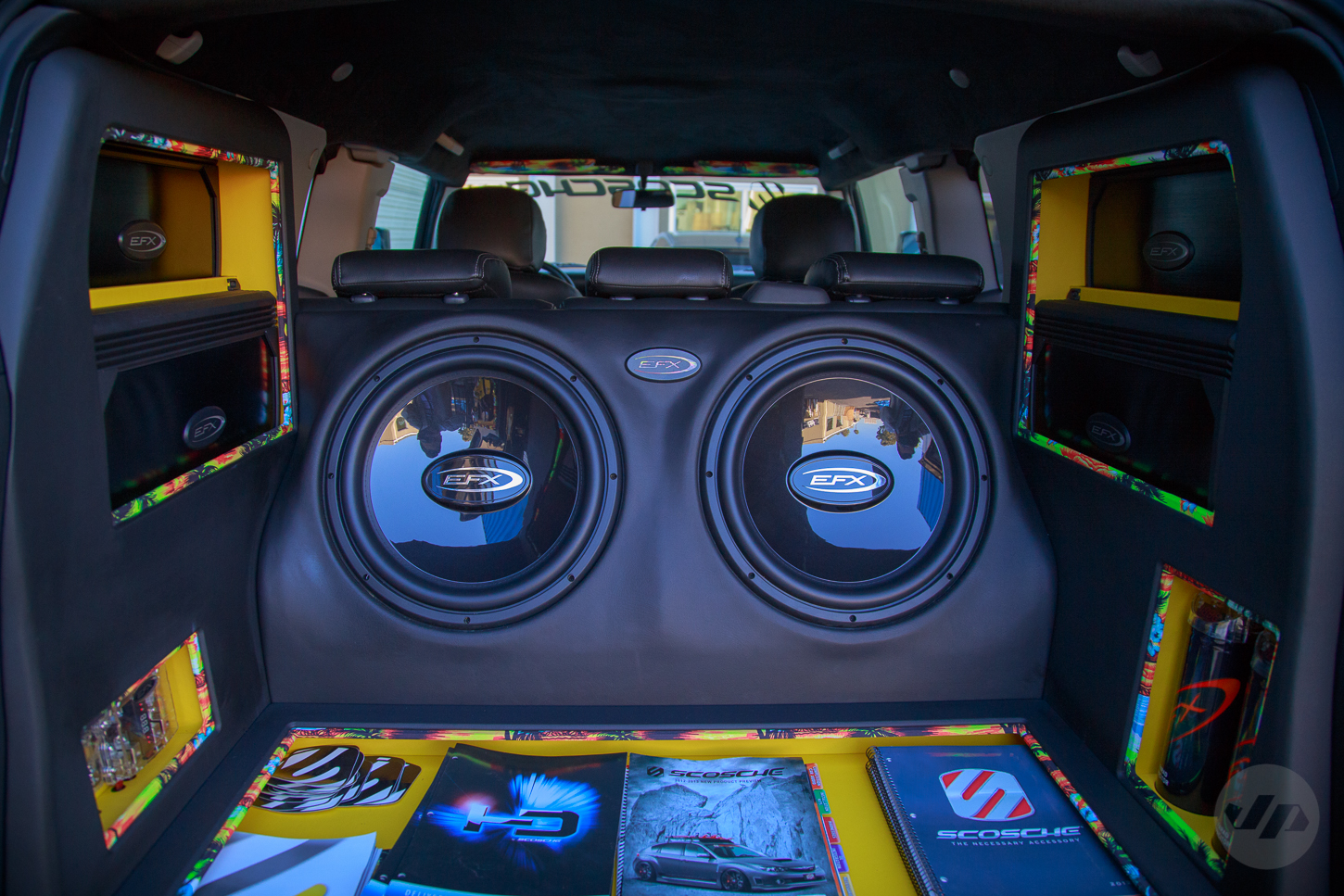 The trunk area is special as it houses two large 15 inch subwoofers and all the rest of the Scosche car audio equipment. A custom shelf was added that serves as a marketing collateral space for use at car shows and tradeshows for the company to have the proper material on them at all times for potential consumers. The rear hatch also includes a custom built iPad listening station equipped with four Scosche headphones that each have their own personal volume control making it easy to showoff the consumer product line. 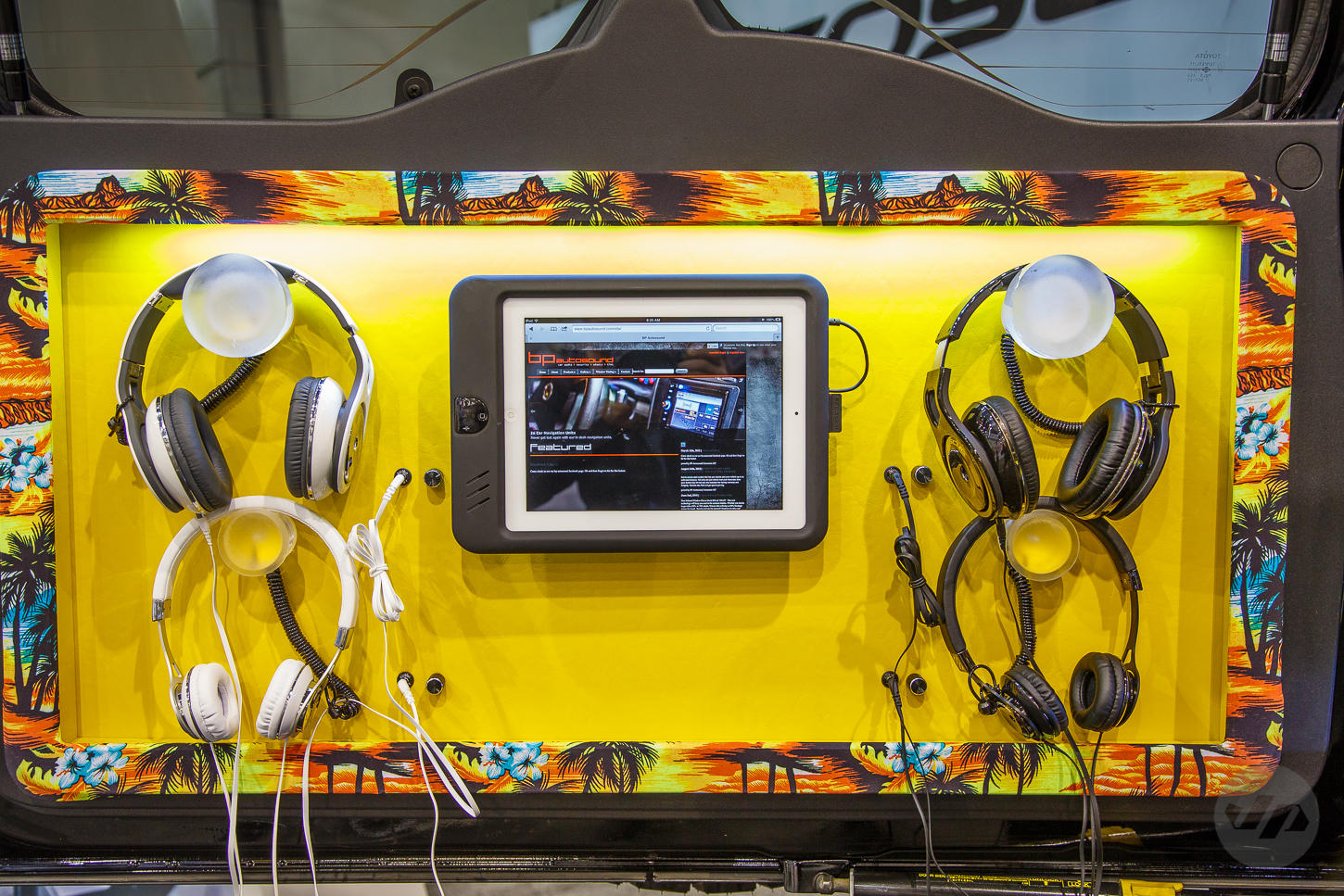 The FJ Cruiser has been used by Scosche for the past few years as a show vehicle so it is often more difficult to take something that is modified and give it a new life. We upgraded the performance with a Magnaflow exhaust and K&N air filter. To give more lighting and an off-road feel to the already raised suspension and body mods we added Rigid Industries LED front grill and FJ LED light rack along with V-LEDs new V3 Triton headlight bulbs. An Inno surf rack was added for those days that Hurley may borrow the car for their surf team. Toyo Tires provided their new Open Country ATS II tire and Enkei supplied ST6 wheels in gunmetal. 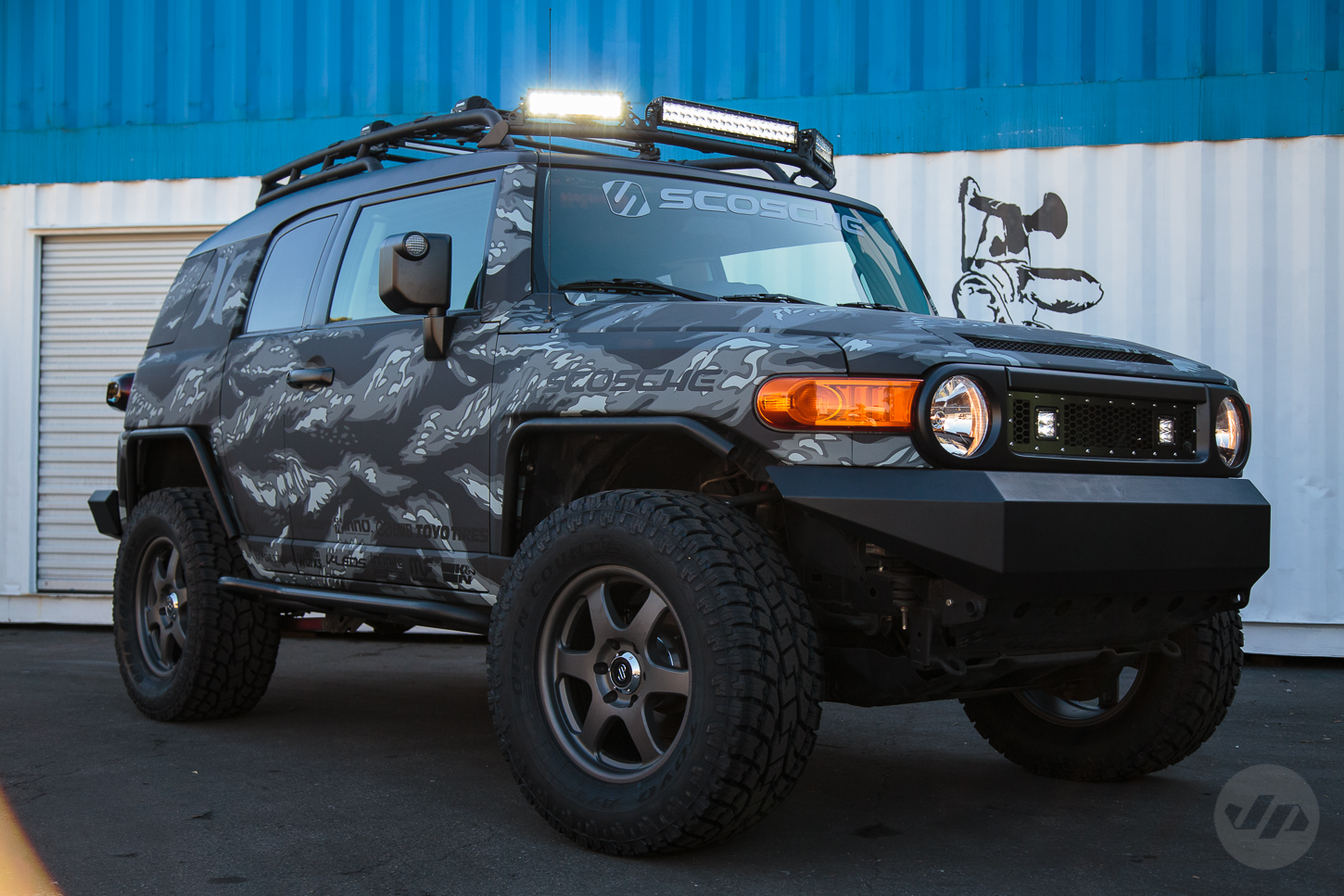 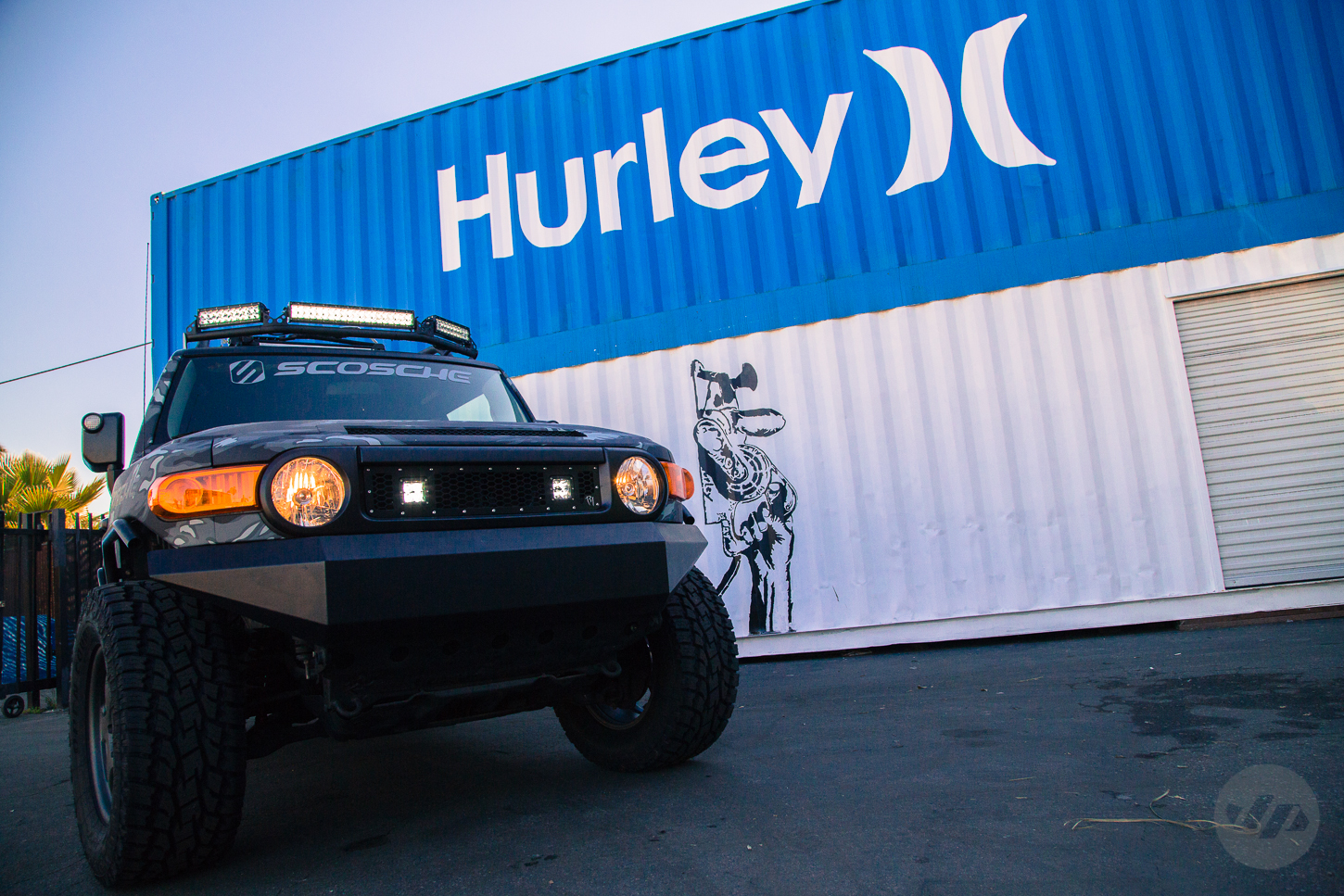 The reveal at CES proved successful being a focal point of the Scosche booth along with the first project car, the Subaru STI. Media attention was gained as well including coverage from both Hypebeast and CNET. USA Today also expressed interest in the FJ Cruiser via social media. The work will continue with a tour of the cars this year by Scosche and more editorial to come.

Special thanks to everyone that made this build possible including Scosche, Ryan and Rod at Hurley, Vapor Studio, Ivan and the team at BP Auto Sound, Magnaflow, Lucio at K&N, Damon at Rigid Industries, John Park, Sean Griffin at Griffin Wurx Paint, Jon Sibal, Eric H. at LPG, Brian at Infinite Auto Design, HWY Auto, Alex at Enkei, Stan at Toyo Tires, Kyle at Inno, Eddie and Steve at Mackin, Jake at VLED’s and every one else that was part of this project.

1 thought on “Behind the Build: Scosche x Hurley FJ Cruiser”