For all my New York friends, the BRISK Bodega launch event is this Saturday, June 8. The event will feature music by artists such as Just Blaze, DJ Sliink and more along with an art exhibit and of course drinks provided by Brisk.

This is all goes together with their announcement today of the launch of their multi-dimensional digital channel editorially curated by Noisey, VICE’s music channel. This is the start of a 14-city tour over the summer withm more music and art. Go to www.briskbodega.com for more info along with check out the new features and contests to win prizes and more. 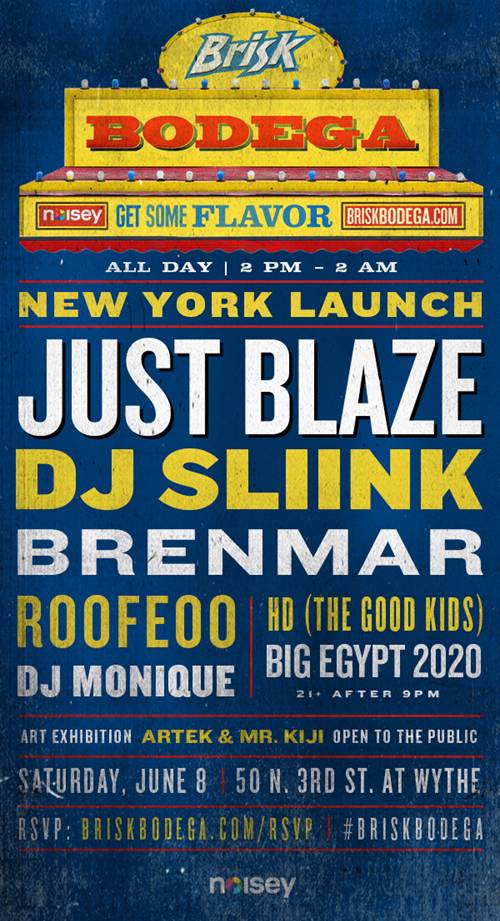 BRISK® ICED TEA LAUNCHES BODEGA PLATFORM TO SERVE AS AN INTERSECTION OF MUSIC, ART AND CULTURE FOR FANS

PURCHASE, N.Y. (June 5, 2013) – Brisk® Iced Tea today announced a new multi-dimensional digital channel editorially curated by Noisey, VICE’s music channel and Remezcla – www.BriskBodega.com – that will provide fans with up to the moment access to urban cross-cultural trends, artists and events. In addition to the launch of the digital platform, Brisk and Noisey will host a summer music event series in 14 major cities across the U.S. featuring top music performances and street art.

“Our platform is inspired by the local bodega, which is often viewed as the cultural core of a neighborhood,” said Linda Bethea, Senior Director of Marketing, Pepsi Lipton Tea Partnership. “Brisk has a rich history of bringing bold flavor to our fans and giving them access to authentic experiences, which will now be consolidated in one easy to browse location. Through our partnership with Noisey and Remezcla, both prominent and raw voices in lifestyle media, we will be able to create an even deeper engagement and interaction with our consumers.”

BriskBodega.com will also feature a series of original videos that will shine a light on the influences and flavors of local communities, including:

· Bodega Chat – is a digital video series hosted by Juan Bago, a comedic actor from New York City’s Washington Heights. The series will feature guests filmed in and around their local bodegas. These individuals – musicians, athletes, actors, local celebrities and personalities, will chat about their achievements and projects, tastes, neighborhood, corner store and the flavors of their community.

· NOISEY video series – Three original Youtube series: “Meet The Fam,” “The Up & Up,” and a special edition of “Back N Forth.”

The digital hub will also reward consumer engagement by providing value through points that can be redeemed for exclusive gear, including watches, premium headphones and other limited edition items through contests such as:

· Rep Your Bodega – through June 25, fans can tell us what gives their favorite bodega its own unique flavor and they could win $5,000 plus a free Brisk-sponsored commercial for their local Bodega.

· Design Brisk – beginning today, fans can submit their own new Brisk can design and have a chance to win $5,000 in cash and prizes through crowd-sourcing design platform, Blank YouVery Much.

“What makes Noisey special is that it’s a music site that goes way beyond album reviews and show listings – it’s really about approaching music through every angle of culture. Brisk Bodega is taking full advantage of that fact and we see it having a big impact on our audience,” says Trevor Silmser, Noisey Publisher.

Fans will also be able to view exclusive content from the Brisk Bodega summer music event series and national grassroots tour on the digital hub. The event series will officially kick-off on June 8 in Brooklyn and will feature live musical and visual performances, street art, stations for Brisk sampling and interactive gaming elements.

To check out the Brisk Bodega platform visit www.BriskBodega.com. To join the conversation, visit Facebook.com/Brisk or follow @Brisk on Twitter.