The draft for this post has been sitting in WordPress for some time.  I’ve been going back and forth on whether or not I should write it and break the routine of the blog as an invitation to discourse. But I just wrote about an SF trip that was full of sure, why nots. So here goes.

A couple of weeks ago, I went to MOCA Grand Ave and saw “Double Conscience” by Kahlil Joseph. It’s a 15 minute short about Compton, viewed on a double screen projection, with Kendrick Lamar’s “Good Kid, m.A.A.d. City” as the soundtrack. It combines hip hop, VSCO-like filtered footage, and raw, familiar imagery for anyone who grew up in LA. But don’t mistake it for a music video – there is no literal interpretation of the lyrics and no twerking dancers. It’s way more than that. 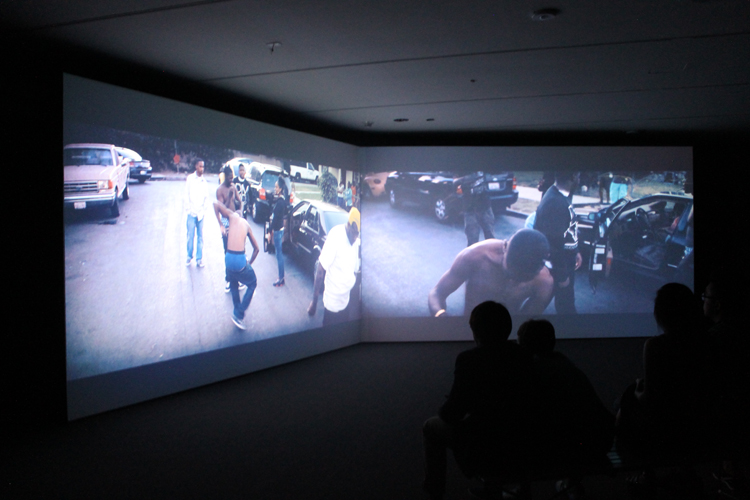 The camera sinuously glides through African American neighborhoods, pausing to capture ordinary moments like driving in a car, swimming, and visiting the barbershop. It’s beautiful and fluid, until home videos dated from 1992 interrupt. 1992 – the year of the Rodney King verdict, of the LA Riots, of Bill Clinton’s presidential candidacy into the Democratic Party, of John Singleton’s Academy Award nominations for “Boyz N The Hood”. It was a year of both progress and regress, a stain in Los Angeles’ history, ultimately haunting our ideas of race in America. 1992 is a rearview mirror; symbolic of where you are and where you came from.

When I said that this exhibit was way more than that, this is what I meant.  It put me in a mood. An inquisitive and emotional mood. I asked myself questions like: have things changed? has society advanced in their thinking? will the African American identity evolve? I was valid in my questioning; it’s been 23 years since 1992. But Kahlil Joseph incorporates images of present time lynchings and police brutality, which leads me to answer a very unfortunate no.

I don’t know why this film was made. I don’t know why it was so important for MOCA to say yes to it. But creativity is a strong catalyst to change. And so is music. If it evoked that mood in me, it can in you. Now cue Kendrick’s “Fuck Your Ethnicity”.