So the trip to Suzuka overall was great. We got to hang out with friends and met a ton of new friends. Talked a bit of business and thought of some cool ideas for next year’s F1. As with the last F1 I went to in Canada, Alpinestar’s was our host. Kenta and Noah both came to experience what it’s like to be in the Paddock at an F1 Race. It was an experience to remember in many ways. The rain on Saturday didn’t stop and cancelled qualifying which made it a pretty fun opportunity to meet some of the drivers and kick it.

Woke up real early. Here’s us on the almost 2 hour Shinkansen ride to Nagoya which travels up to 186mph! I think BART travels 80mph but averages 30mph. LOL, yeah.. 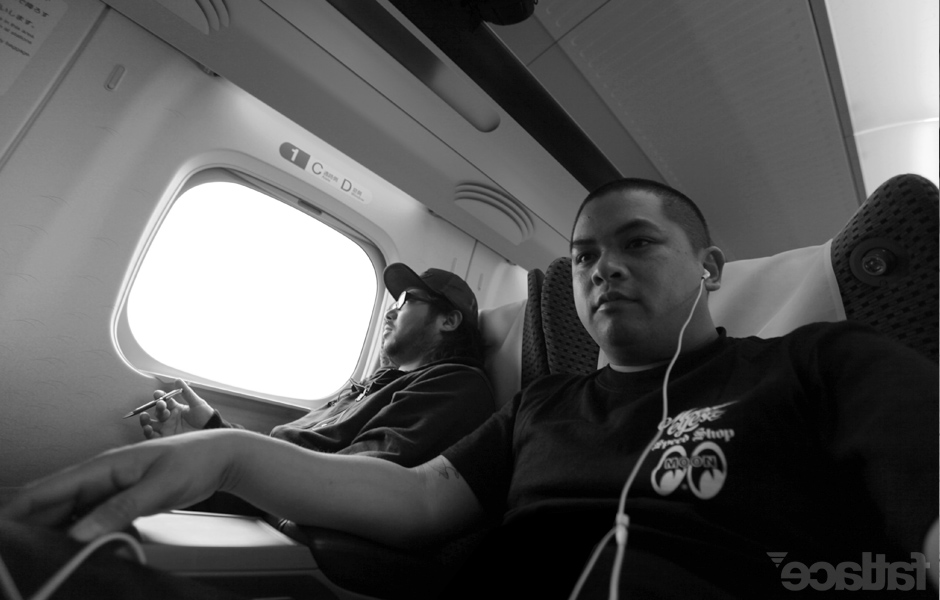 As we got off the Shinkansen, I spotted the first of hundreds of thousand Ferarri fans. 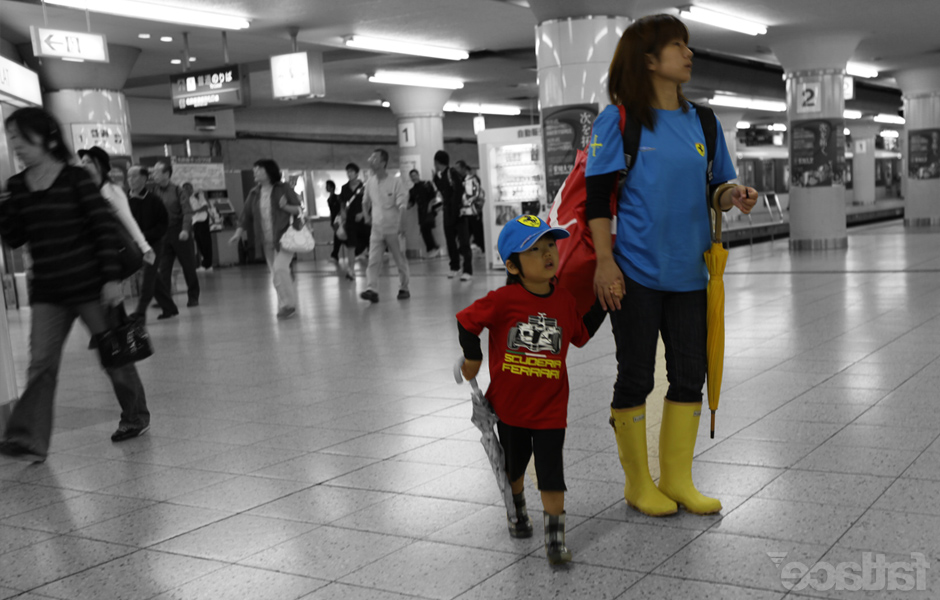 Did I say it was soaked? Since we didnt arrange anyone to pick us up, we took the bus to the Track. The line was long and it was soaking wet but nothing stops the Style in Japan. 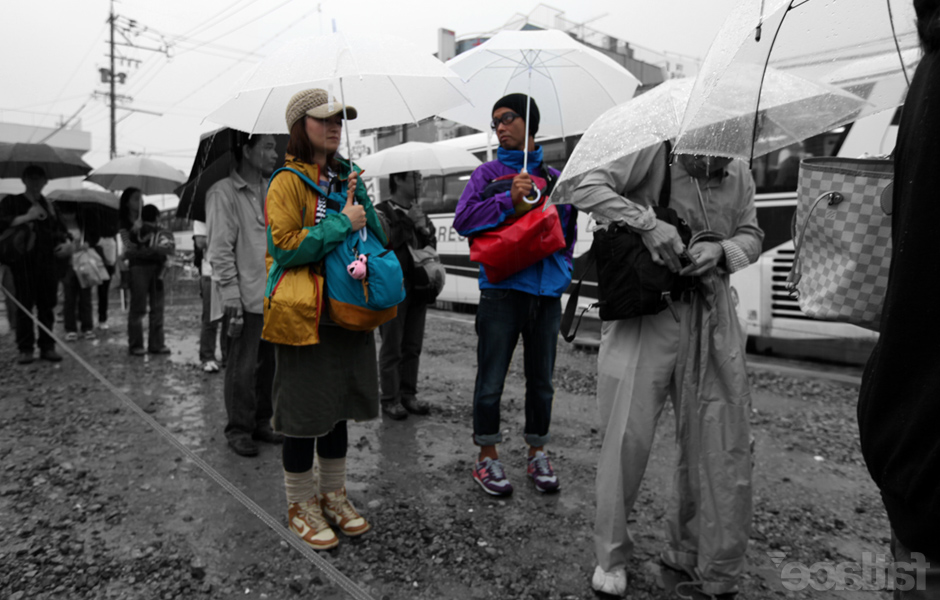 Eddie and Mike from Alpinestars. I can’t wait to see Mike’s 800hp R35. 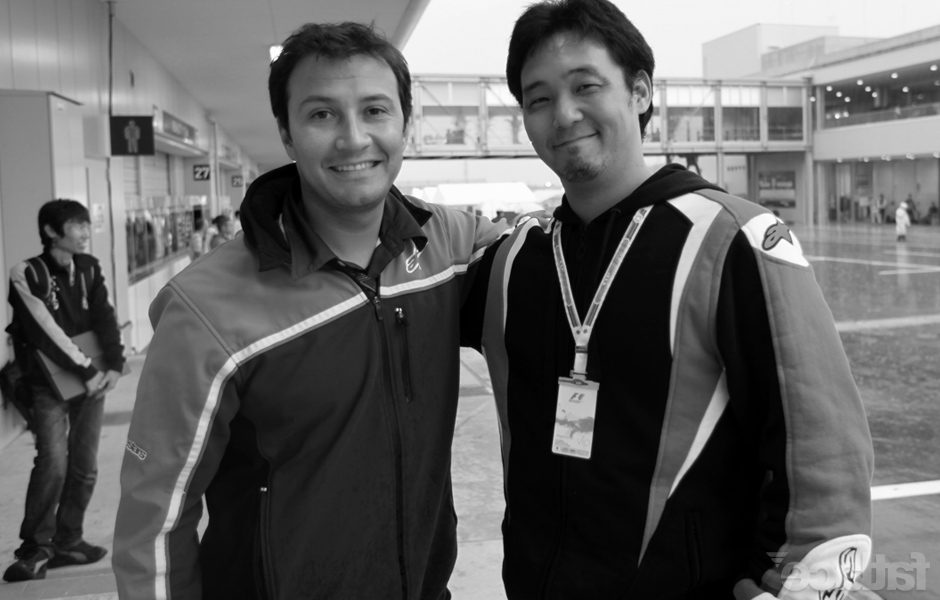 It was a good surprise to see Lindsay (Pink GodziRa) who used to live in LA. He’s now designing with Vadim over at a small company called Honda. I completely forgot their friends name who works at Nissan but they were all cool to chill with before qualifying which didnt happen til the next morning. 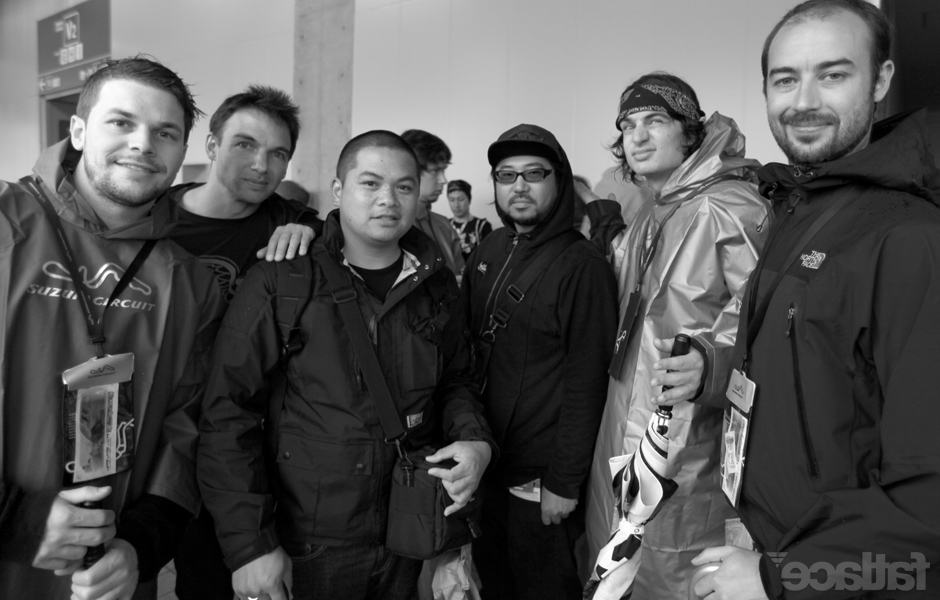 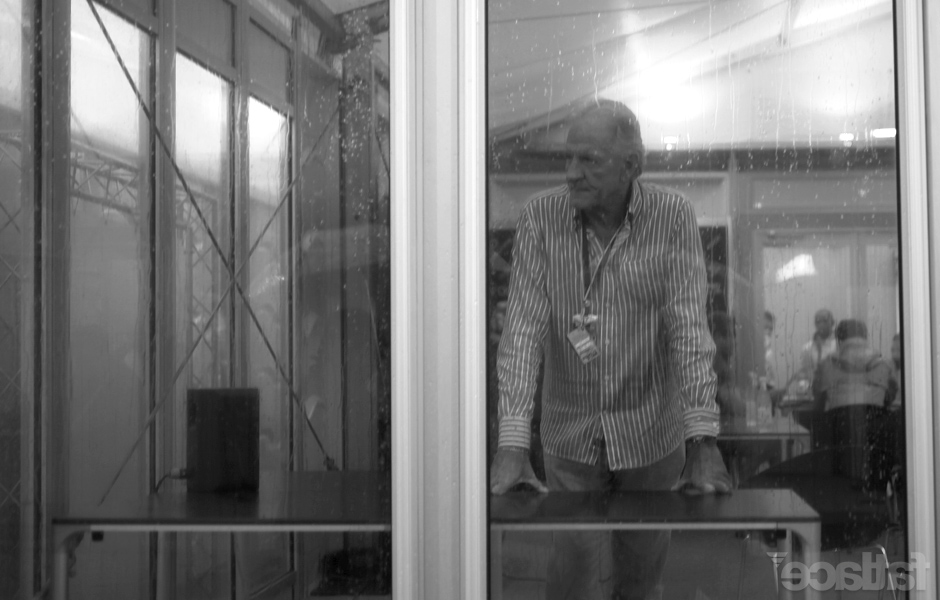 Got to talking with Lewis Hamilton. Chill but definitely was tripping off the gear box change. So unfortunate the past couple of races but honestly, I dont know how anyone can stop the RedBulls. It’s incredible how much faster their cars are. 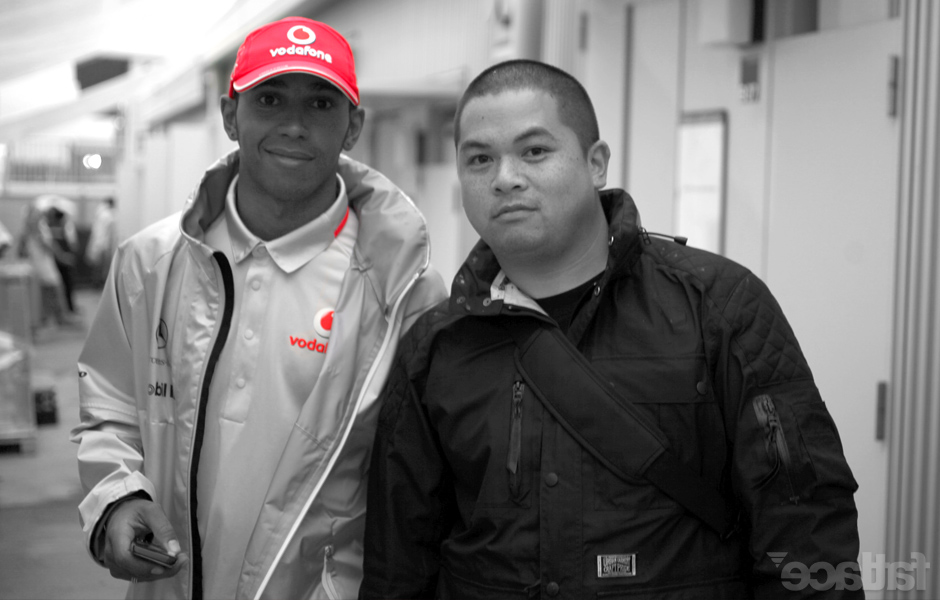 I didnt think of getting anything signed but I had just bought a cool Silver marker in the store. I had him sign my iphone 4 case. 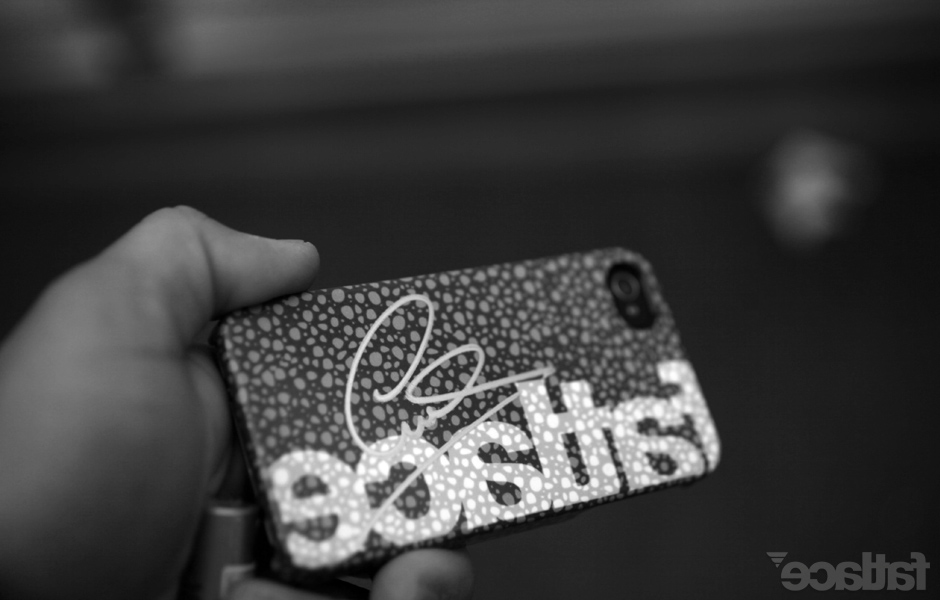 Tonio and I in deep discussions about style. What great about meeting drivers is that you sense their style from what they wear off the track. Tonio’s def into hip hop and street. He actually has his own brand and store in Italy called Bonnie & Clyde. 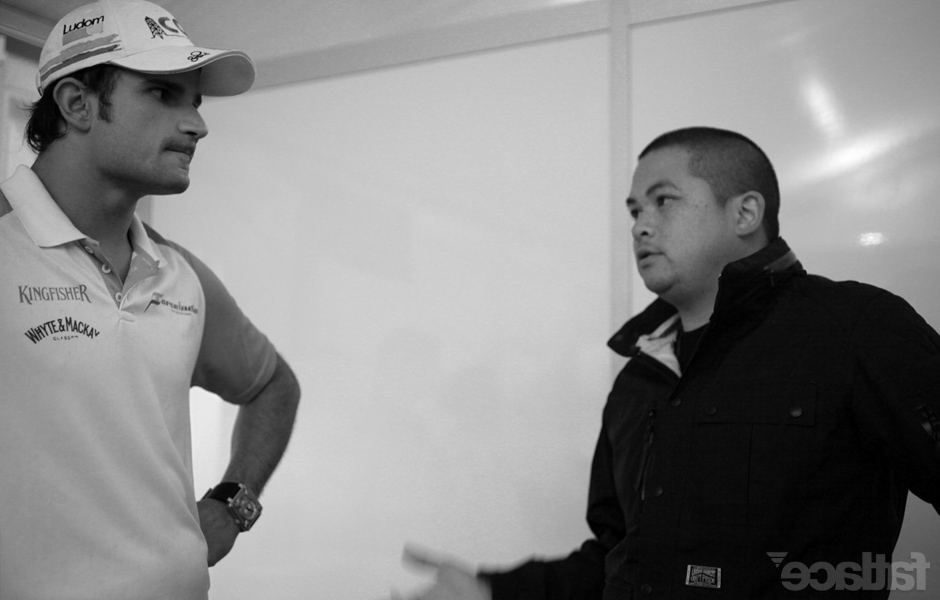 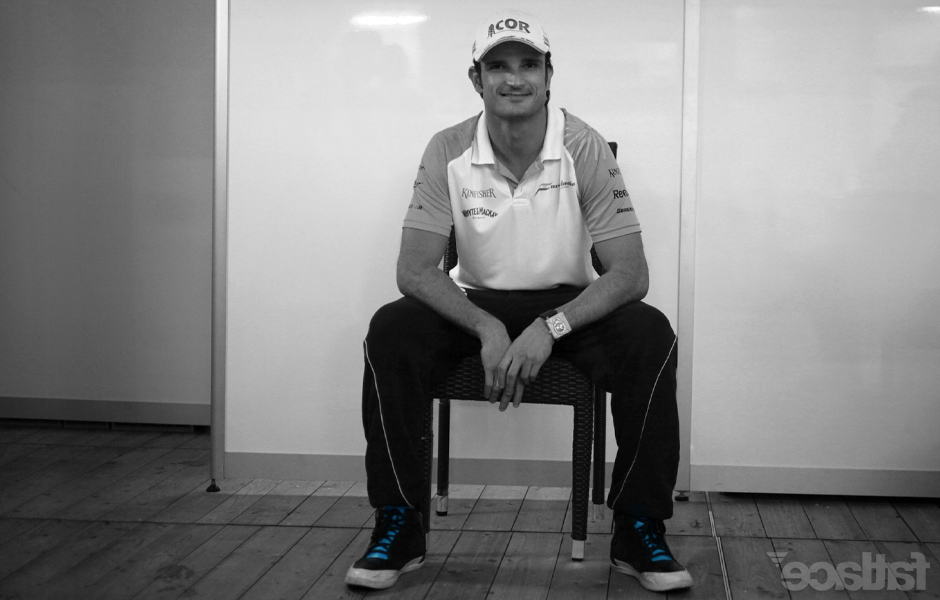