It’s early Saturday morning, and I am en-route to the shoot location and following my good buddy Hayden Gibbons 180SX on a trailer.  It’s wide, agressive, and is one of those cars that right off the bat doesn’t care whether you love it or hate it.  All this is made very apparent due to the sticker on the rear bumper.  Say hello to FATSLT. 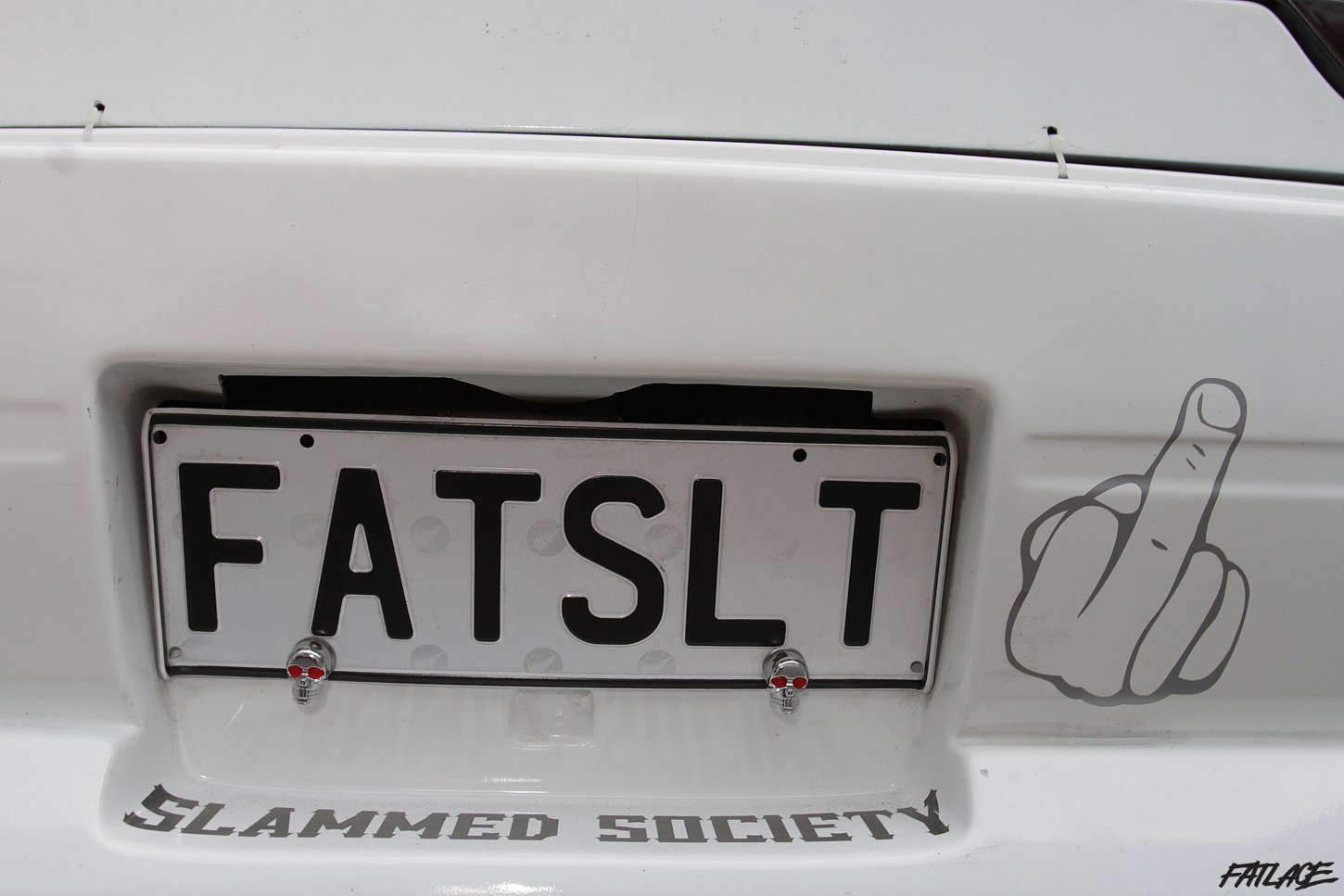 This 1990 Silvia has been built as a fullblown drift machine and has quite the original look to it too. 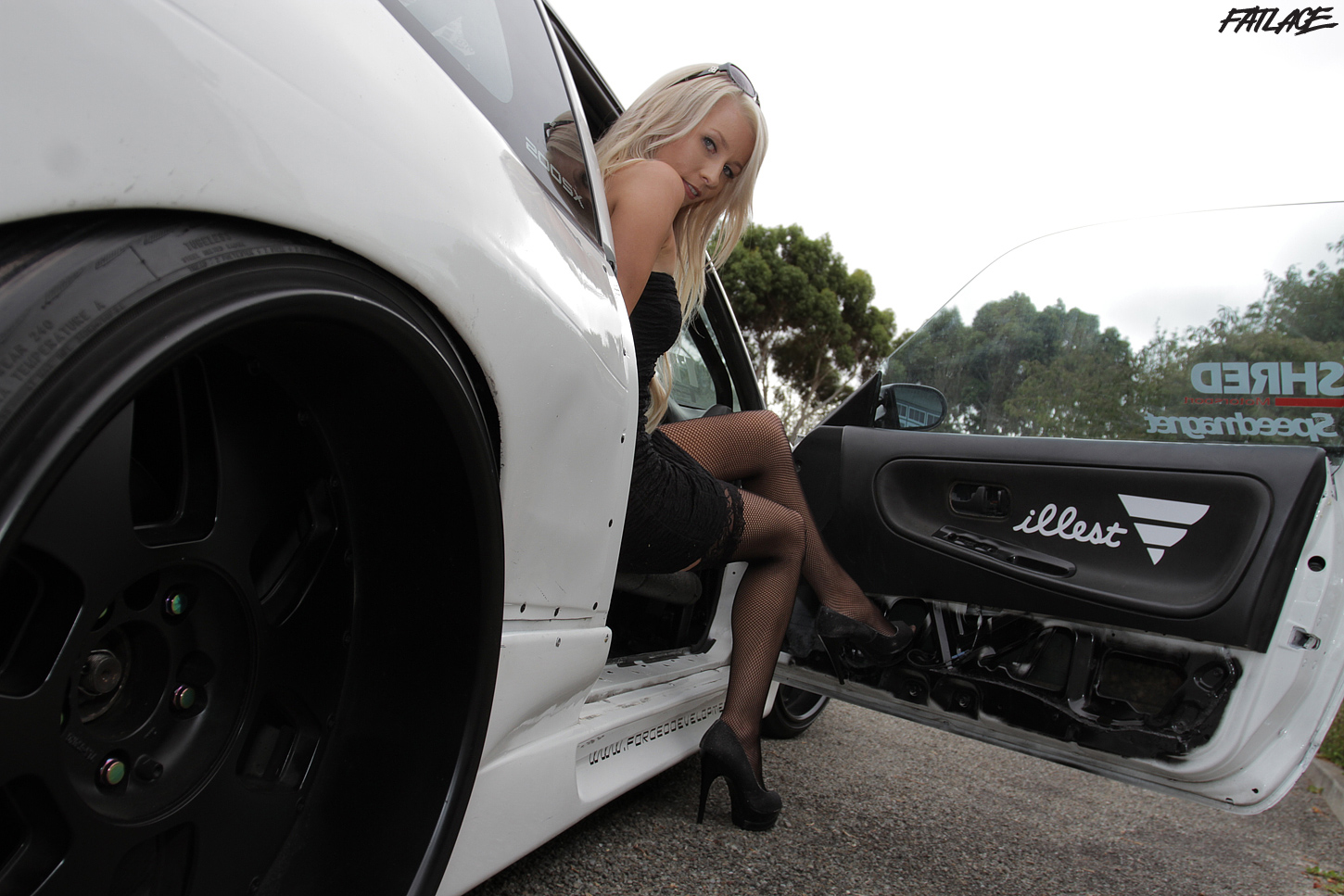 The front and rear has been pumped out 50mm front and back on each side, hence the ‘FAT’ part of the plate that adorns the car.  Hayden decided that if we were going to shoot the car, it would be great to pair it up with a gorgeous girl, so say hello to Katherine! 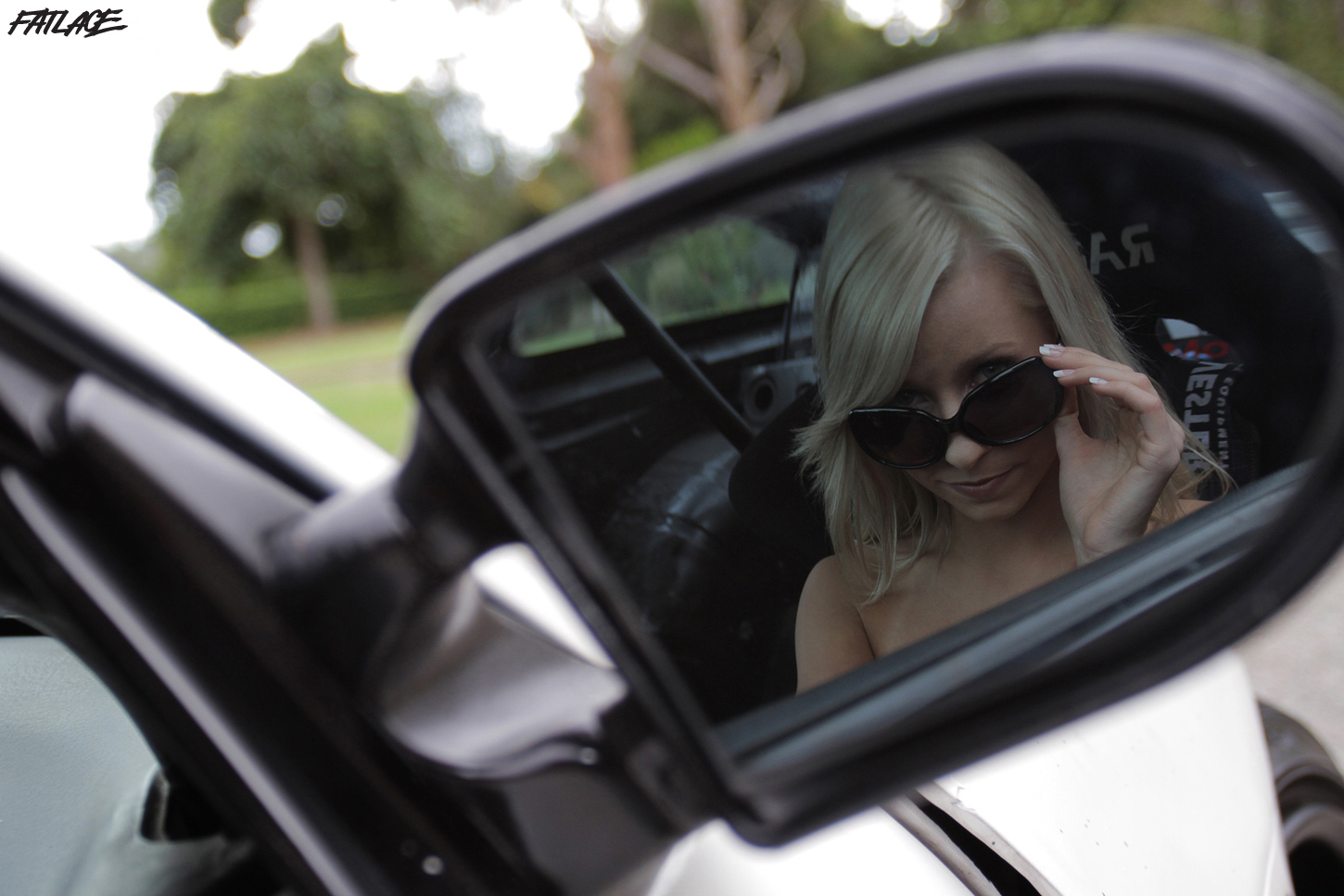 Katherine is a self-professed car nut herself so don’t let the girly girly dress and heels fool you.  She has been around cars more than most of us! 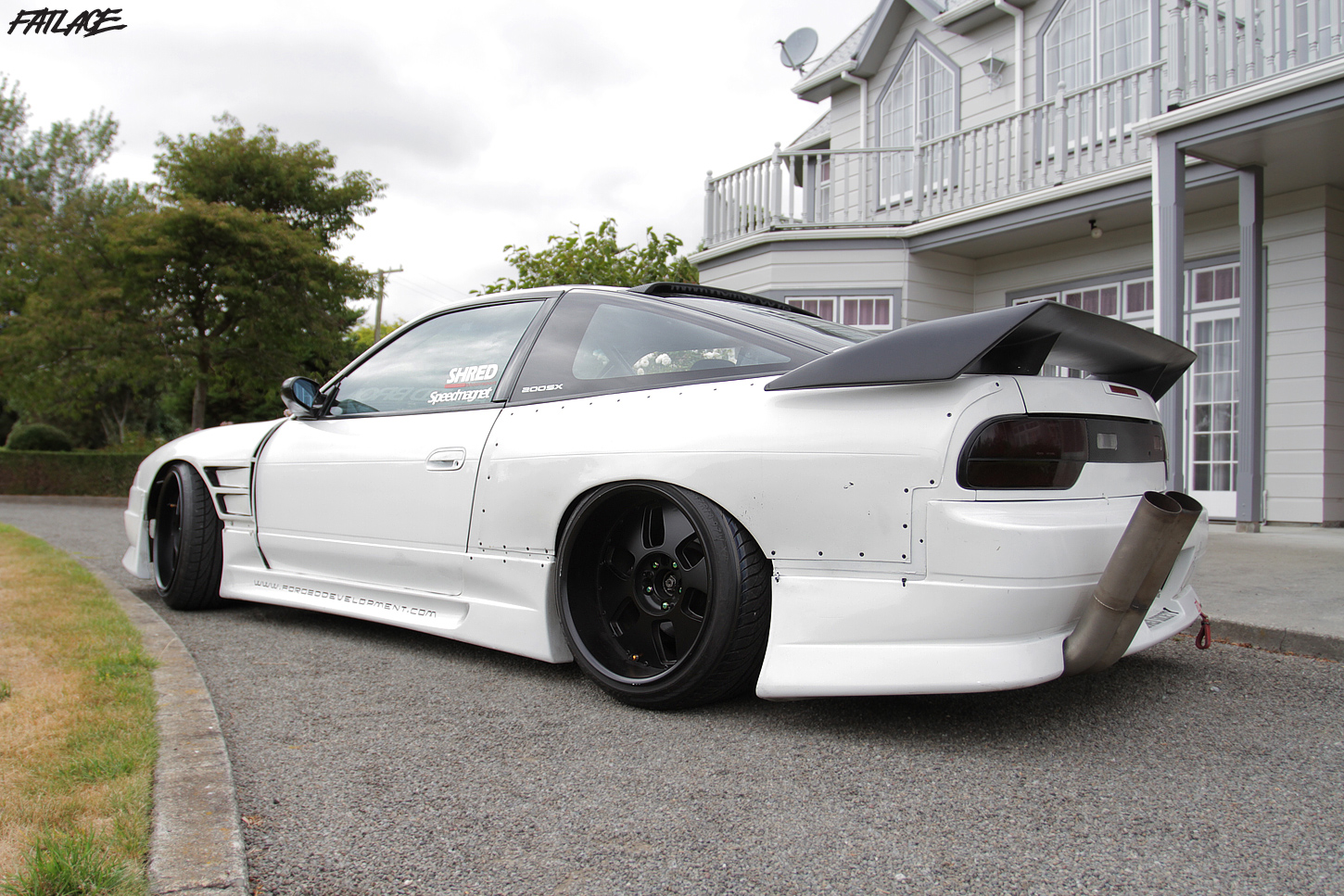 The first thing that attracted me to this 180 was the screamer pipes protruding out of the back end.  It’s all about attitude and this car has plenty of it. 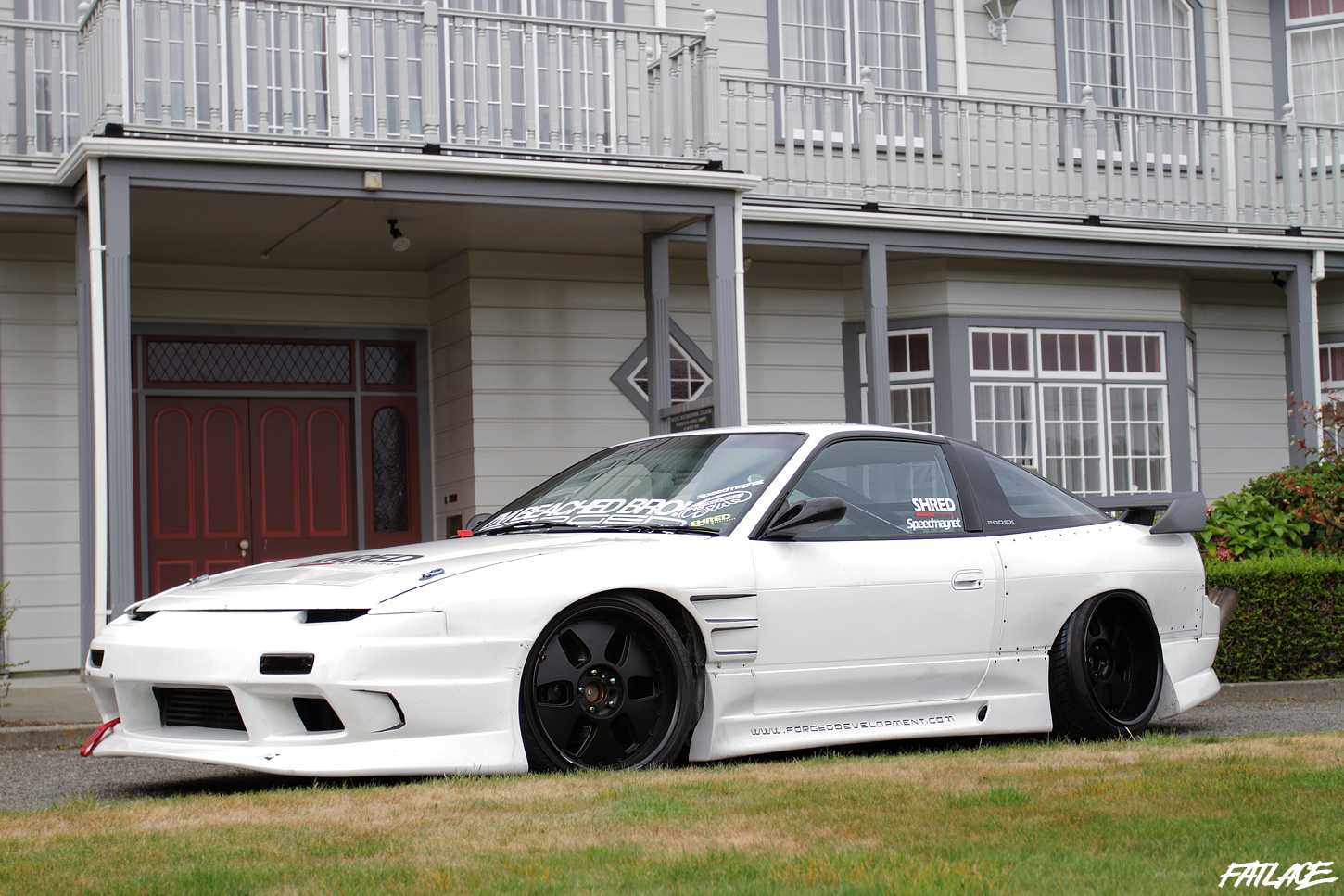 The stance is courtesy of BC gold adjustable suspension, this 180 is not designed to sit on driveways, it is most at home terrorizing tyres. With a gorgeous girl, and car to try and concentrate on we were rather distracted to say the least! 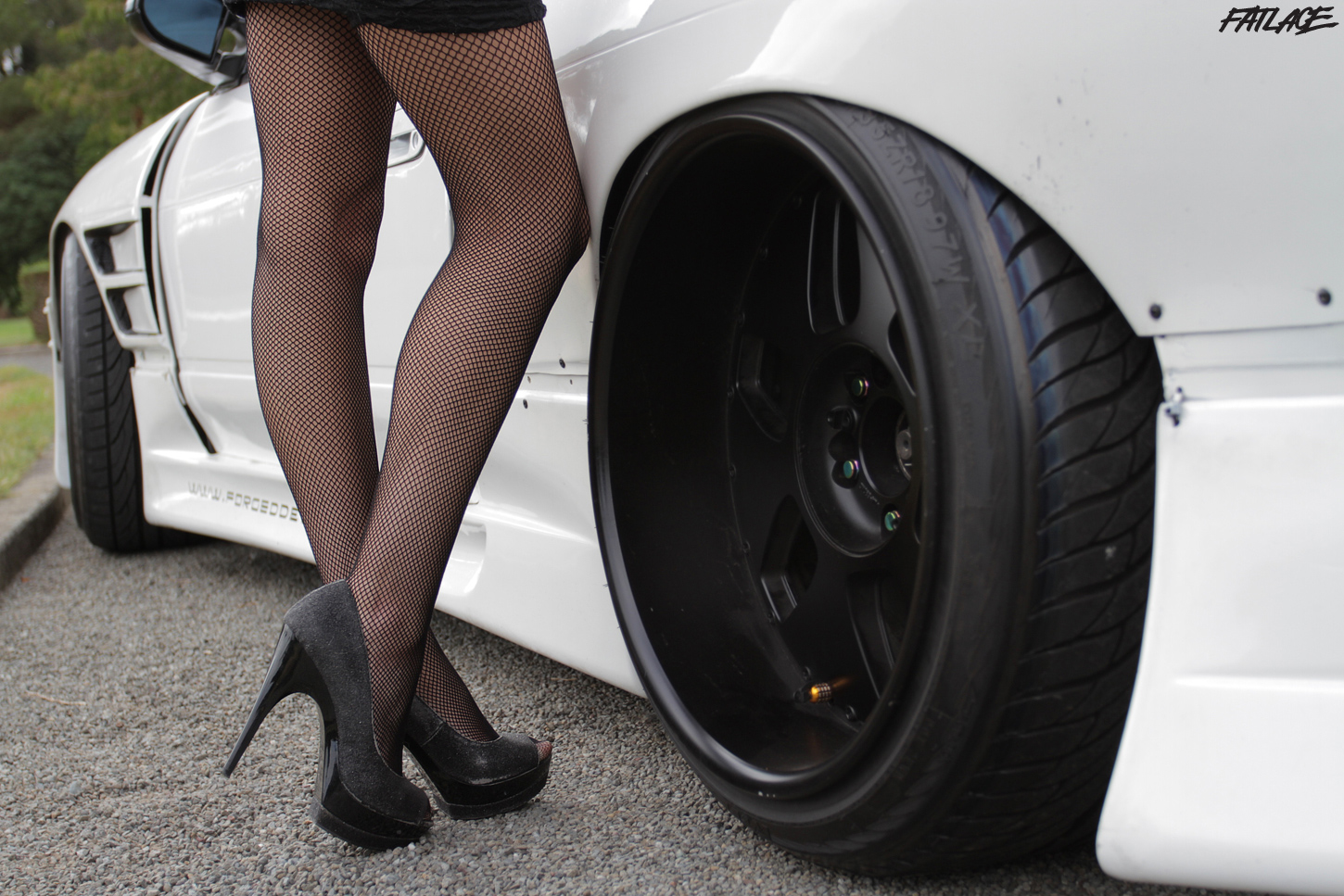 It looks flush and it certainly is, hard to believe this kind of clearance works well even when under a full load while drifting… 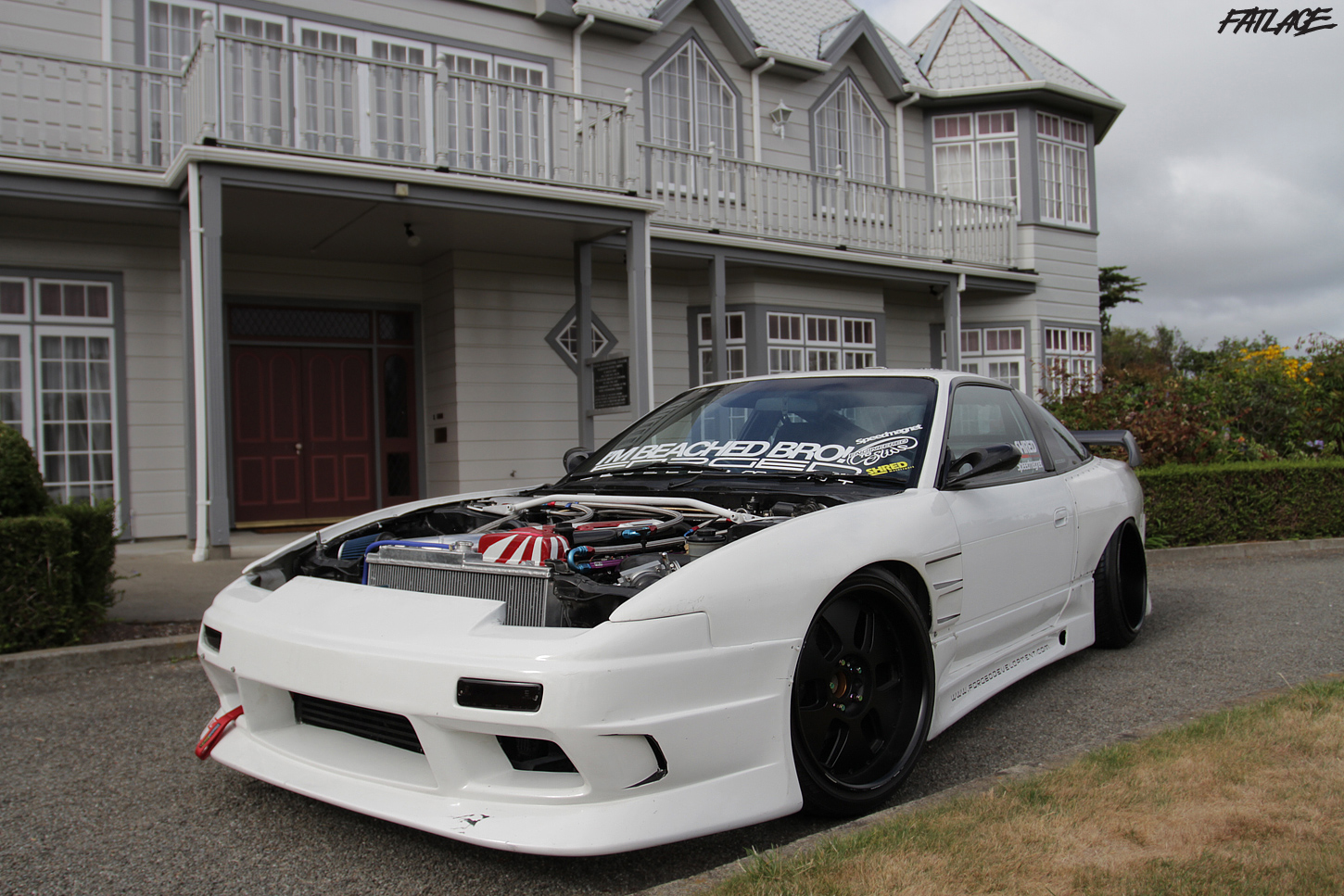 The attitude carries on through to the engine bay, a headcover painted with the ‘Hinomaru’ rising sun shows this car is JDM-proud! But it’s no SR up front here… 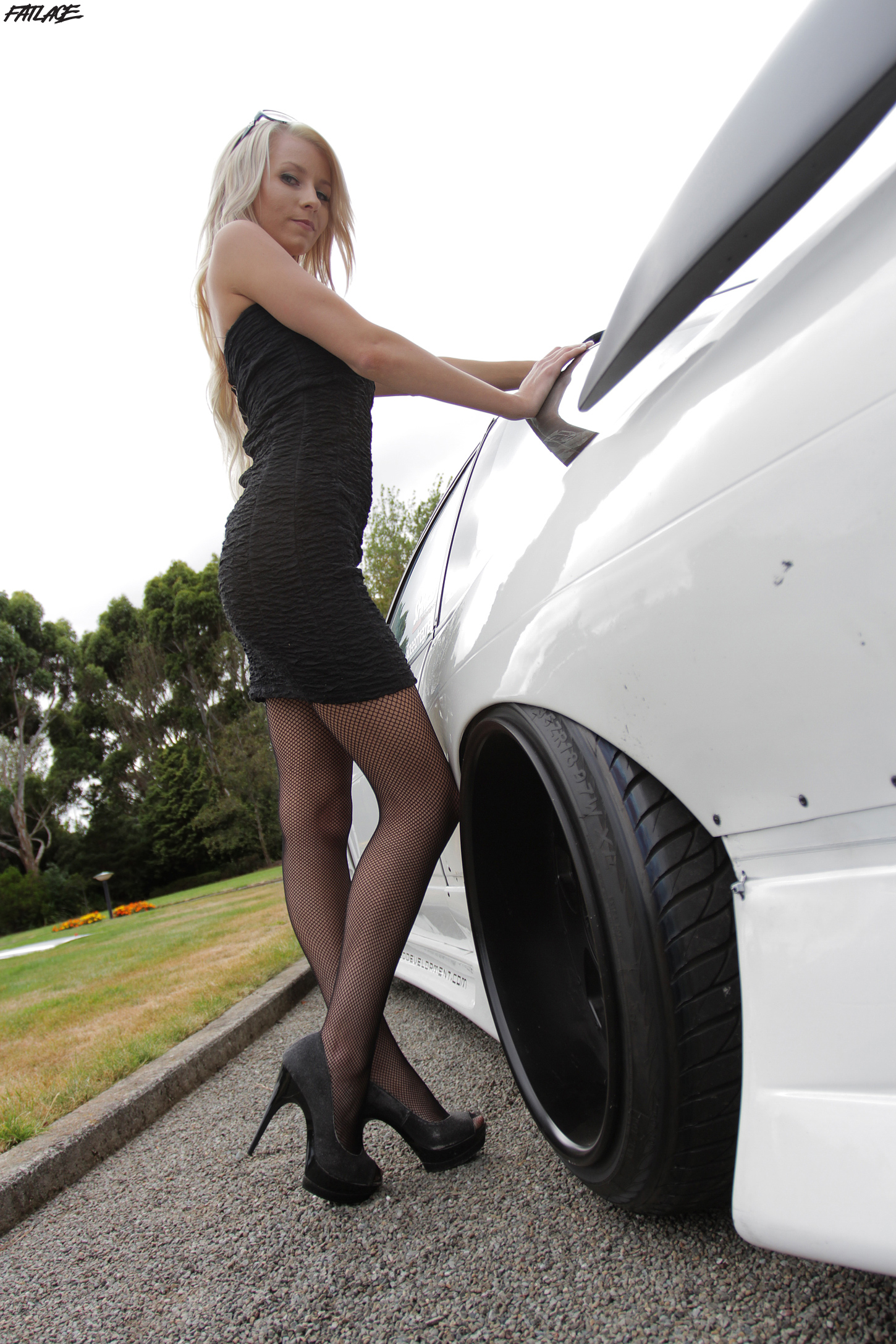 Do we really need to caption everything!? 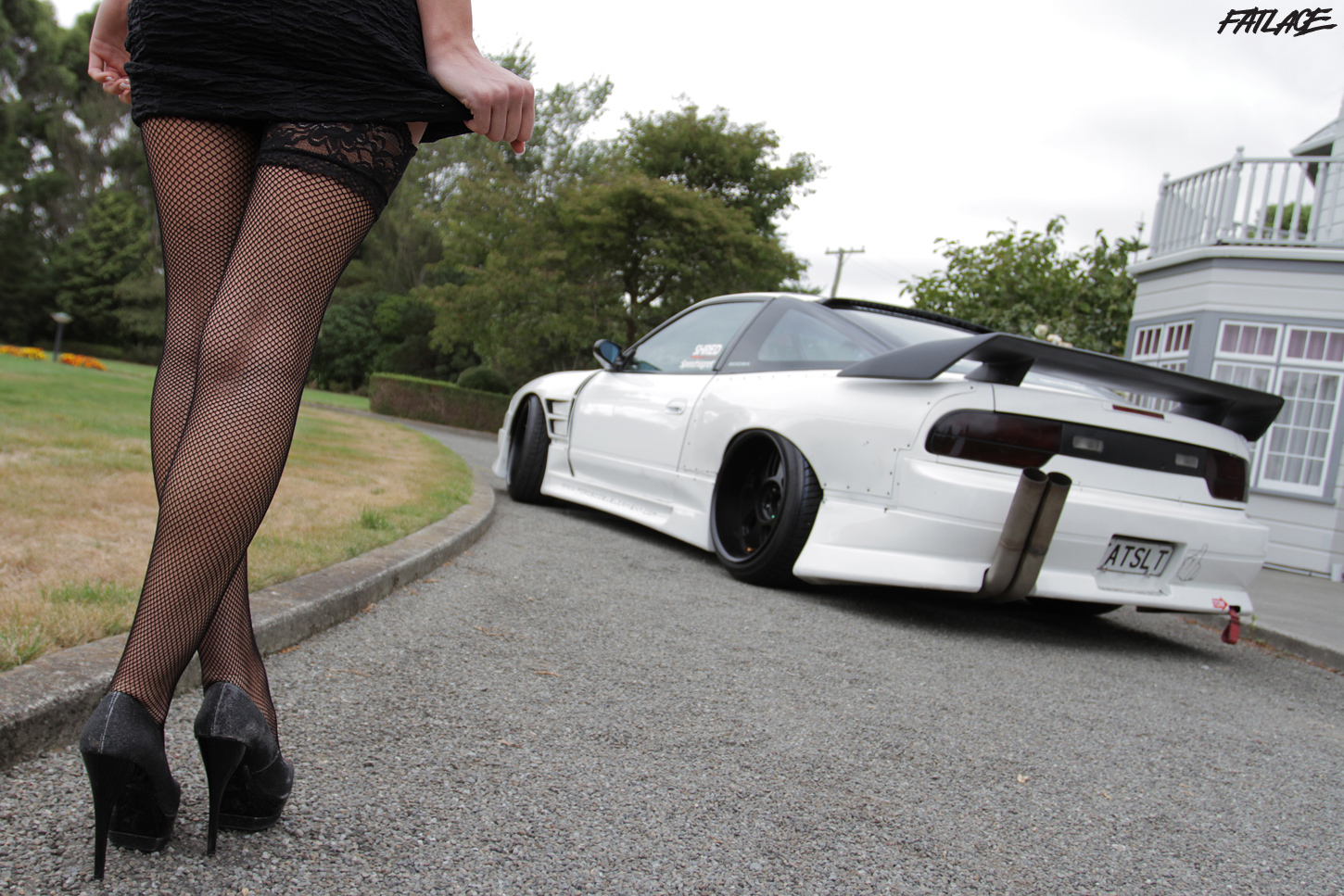 With a name like ‘FATSLT’, screamer pipes, agressive stance, a pumped up kit, and the ‘f**k you’ sticker on the back, all that was needed was the 326 Power wing to go on the back to complete the look…oh and Katherine. Flick open the doors and it’s strictly business too, if it wasn’t needed then it was removed. Hayden was always there to lend a hand during the shoot… Now that I have your attention again…the 2J up front is mated to a RB25DET gear box with JZ bell housing, ensuring the power is delivered efficiently to the rear wheels. 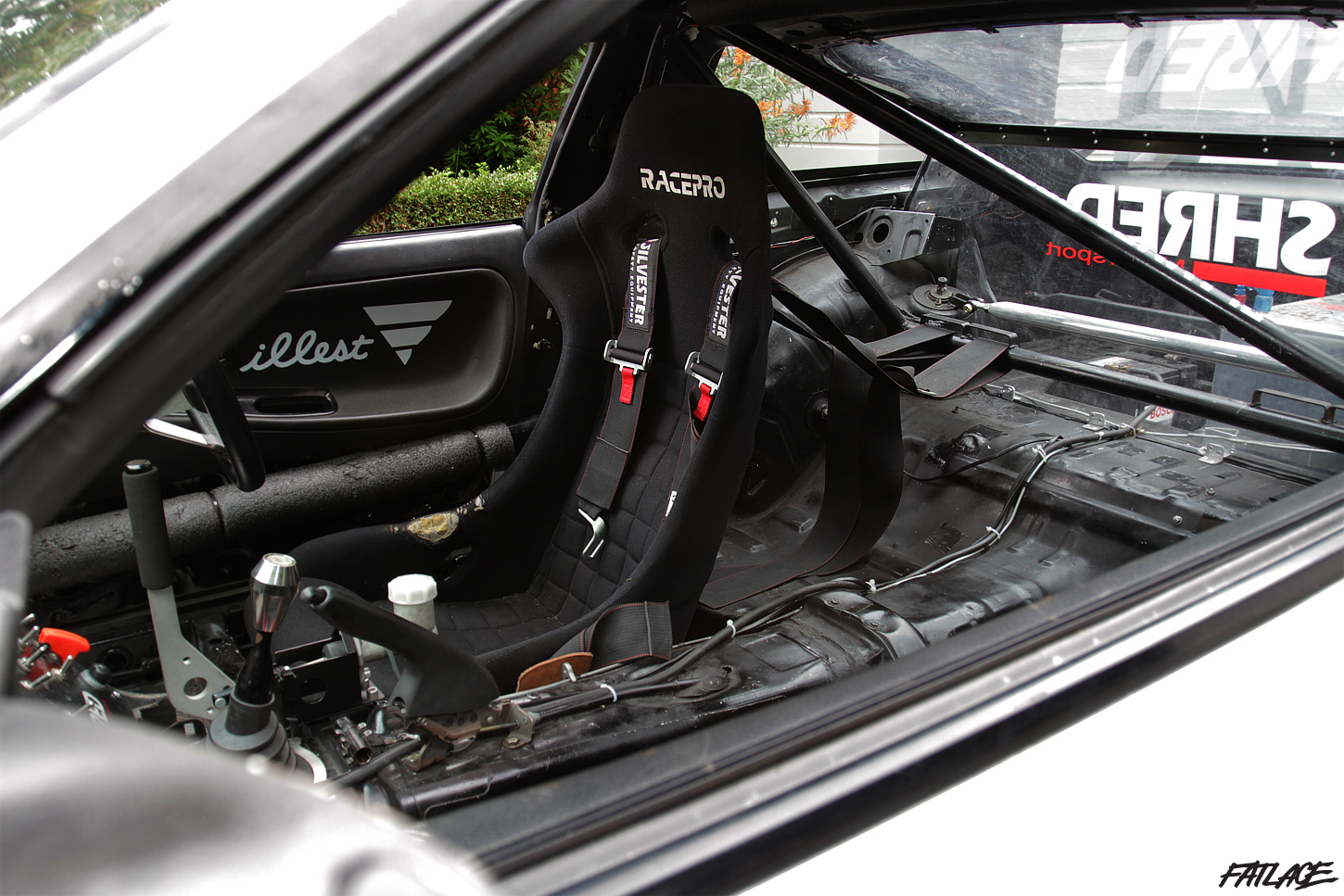 When things are smoking, and Hayden is flinging it all sideways he is kept in his office courtesy of a Racepro fixed Bucket seat with 2x harnesses. Directly behind the driver is a plexi-glass separation wall for the driver and fuel cell. 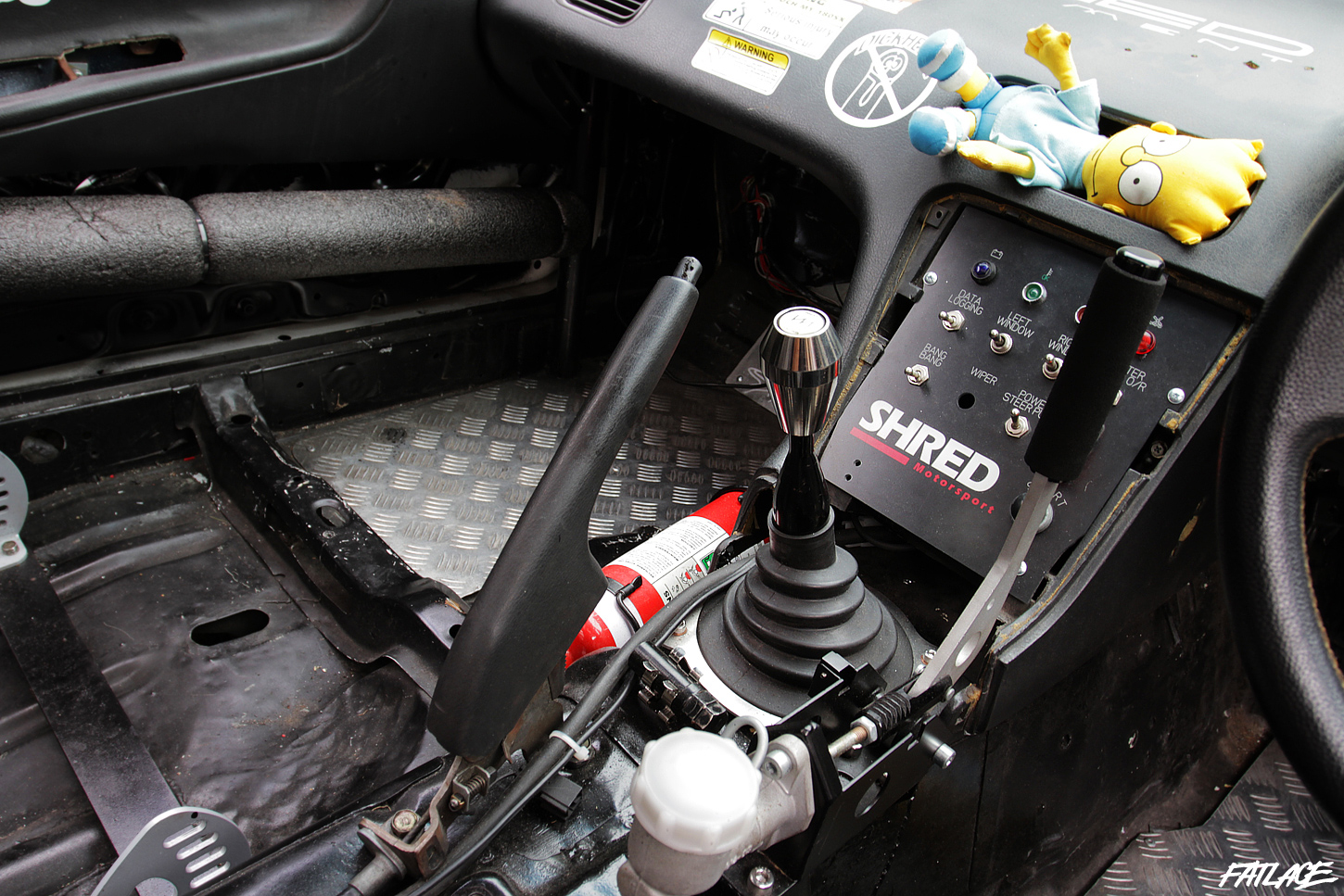 Double calipers on the rear wheels mean that FATSLT has the original cable handbrake as well as a hydraulic for drifting.  Wheel-chocks not included…i mean not needed! 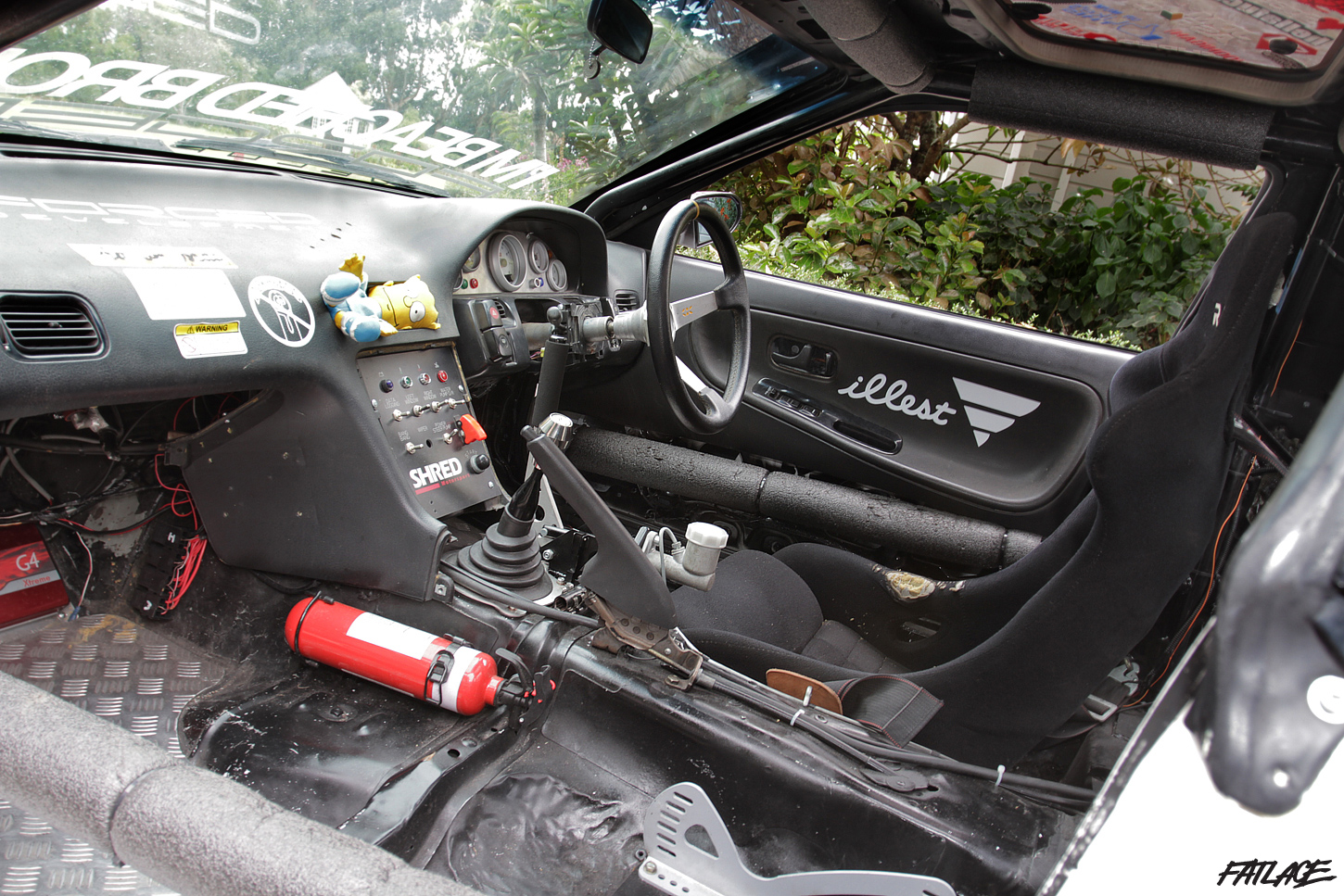 It’s all very open and spacious although with Hayden being so tall, unless you are 6ft good luck reaching them pedals! Stickerbombing seems to be a trend with this car, if there is some space, it will be filled with a sticker with a reference to your sister, the local ‘wave’ or how Hayden is ‘lovin it’? Heading back around to the front end… With a list of aftermarket mods as long as a little kids Christmas list this 180 has plenty of get up and go.  A few trinkets consist of a GT3540 turbo, aftermarket front-facing inlet manifold, aftermarket 80mm throttle body, and a custom made accelerator cable. Of course Hayden is sliding on a budget but still insisted on putting in braided lines, a fuel pressure regulator, solid alloy dash 10 fuel lines, 2x Bosche 044 fuel pumps, and a couple of fuel filters. I was told that the project has set him back in the vicinity of 20-25k, now that is one epic car for that coin! The only problem with a car like this is it certainly is photogenic, but it’s also a pain in the a$$ to move around for shooting, thanks to the locked up R180 4:1 diff.  It’s a fine line between a successful slow speed take off or leaving half your tyres on the estate driveway! To wind things up we needed some sort of a portfolio/profile shot.  Hayden doesn’t like smiling so to substitute we strung him up on a crane. Big props to Hayden for bringing FATSLT out, and a huge thank-you to the gorgeous Katherine, who I am sure you will be seeing again sometime soon!