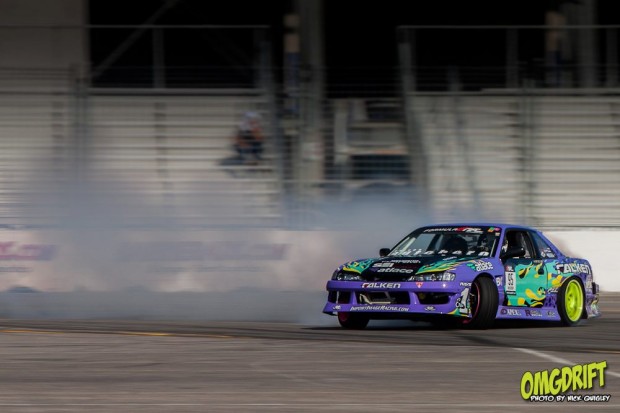 This year FD implemented a new track layout in comparison to previous years. On the start of Thursday’s practice the judges had the track laid out with 3 outer clipping zones. It was nearly impossible to make it to all 3 outer zones without gobs of horsepower, even if you had the horsepower the drift line was still extremely askew. In the process of trying to make it out to these 3 outer zones I was really having to romp on my car hard. It felt like I was driving my old sr20det motor and having to clutch kick constantly. With the new LS7 V8 that we are running this year, I’ve generally never have had to clutch kick up until Vegas. I drove practice for about an hour, beating up my car until the judges finally realized this 3 outer zone track is not working when a fellow driver smashed into the wall, totaling his car and delaying practice for about 2 hours. The judges then changed the course to have only 2 outer clipping zones. After the changes were made the track flowed so much smoother and I was really starting to feel it out. 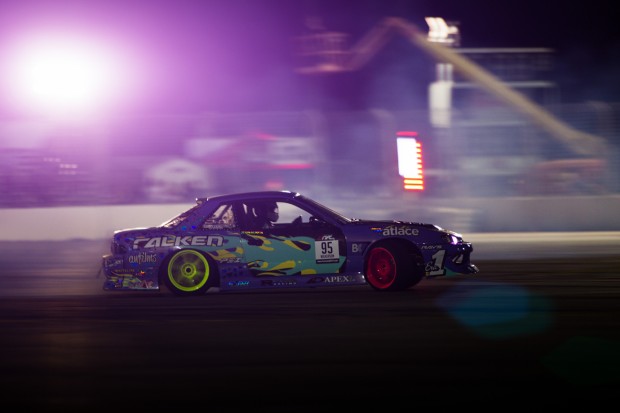 On my last run of Thursday nights practice I heard some weird noise coming from my rear end. We stopped practicing immediately and realized my differential had some sort of tight spot in it. On friday Ray from Kaaz USA drove from Southern California to Las Vegas to help us diagnose what had happened, rebuild the diff and set the backlash on a new ring gear and pinion. Since it’s about a 5 hour drive to Vegas from California we knew Ray would not be arriving until late in the afternoon. We made sure to have the differential pulled out and disassembled so he could go over it as soon as he got to the track. The ring gear and pinion looked brand new so he put the diff back together and the tight spot was still there. We pulled it out again and made sure everything inside the diff was assembled correctly. The time was ticking and we were getting closer to practice and qualifying each minute. It was too late to try to install a new ring gear and pinion in time so we put the diff back in the car. 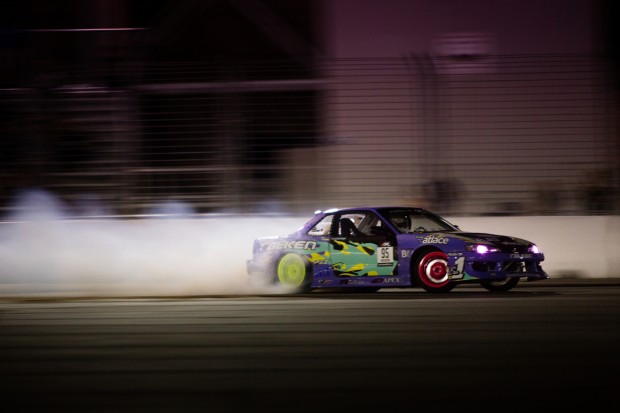 The tight spot was still apparent and Ray said there had to be a tooth on the pinion shaft that was slightly bent, even though it was not visible to the eye. Ray told me the pinion gear will probably only last for 4 runs so do only 2 practice runs and do your 2 qualifying runs. My first qualifying run was okay, I did a semi conservative run and scored a 78. I knew my first qualifying run was good enough to get us into the show so my second run I wanted to have some fun and push even harder. My second qualifying run was awesome all the way up to the end. I filled both the outer clipping zones, had good angle and snappy/smooth transitions. About 3 feet from the finish line my ring gear and pinion decided to snap causing my car to straighten out. Because of this I was awarded a 0 but it was understandable. 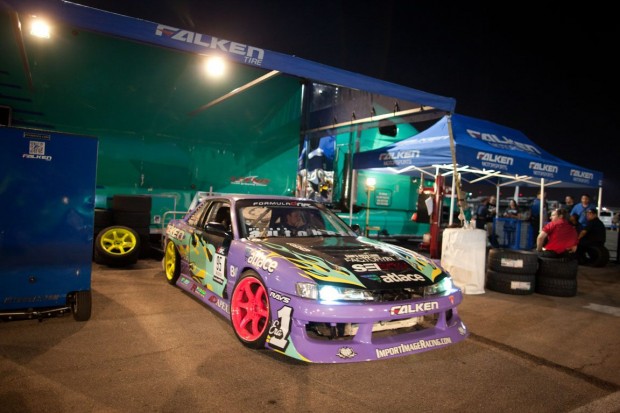 In the drivers meeting I found out that we qualified 22nd. Since my car was broke and there wasn’t enough time to fix it, I couldn’t drive in Top 32 practice Friday night. Instead of driving my spotter/girlfriend Vanessa and I spectated during practice, studying the drivers that I would face Saturday. Saturday morning we got the car fixed. Big thank you to Nick and Jonathan from Falken Tire for letting me borrow their spare differential. It saved us a ton of time and worked out great. 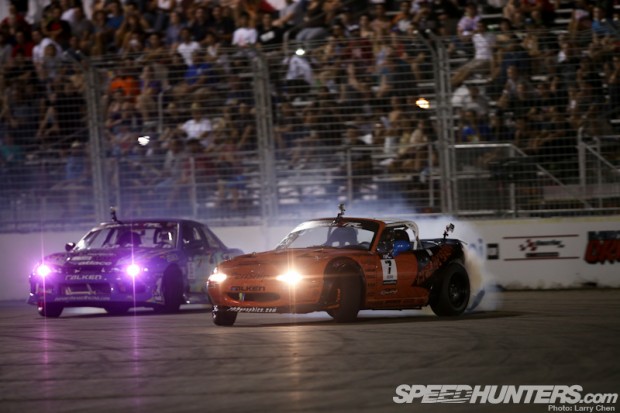 In Top 32 we were paired up against the 11th place qualifier Danny George in his V8 powered Mazda Miata. After studying Danny in practice Friday night, I knew his car was really fast but he seemed to be pretty inconsistent. We knew that if we ran consistent and smooth we could get the win. On his lead I knew he was going to push really hard and potentially make a mistake so I stayed close but gave him a little breathing room. He tapped the wall in front of me and straightened out slightly so I gave him a little more room and reeled him in towards the end of the track. I knew we had a major advantage so I just did a consistent and smooth lead run. Danny made a lot of corrections trying to chase me and that sealed the deal. So we moved onto Top 16! 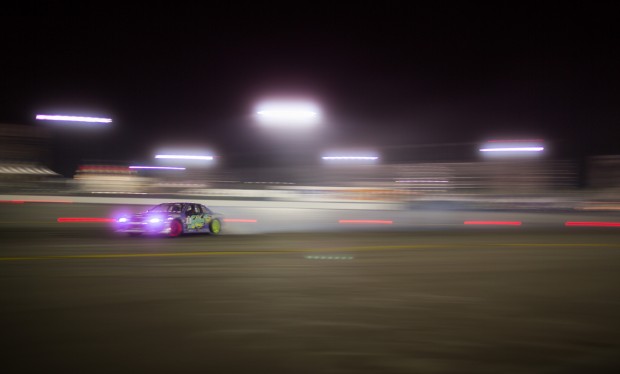 In Top 16 I was paired up with Michael Essa in his BMW Z4. This year Essa has really seemed to dial in his BMW and has been driving really well. I knew Essa’s car was fast and to beat him I needed to lay down a solid chase run and be on his door. So Essa lead first and I chased him into the first corner very closely. We initiated door to door and right before the inner clipping point Essa grabs a load of handbrake and slows down substantially. I being so close to him have to slam on my brakes and throw more angle to avoid hitting him. He gets back on the gas and transitions rapidly while I try to get back on the gas and transition in sync with him. While trying to transition with him I was already going much slower and had more angle. When I went to transfer the car flicked too hard and I spun behind him. Going into my lead he had a major advantage. I put down a solid lead run hoping he would make a large mistake behind me. But he played it cool and knew he didn’t have to be close in proximity to beat me. The judges gave him the win and he moved on. 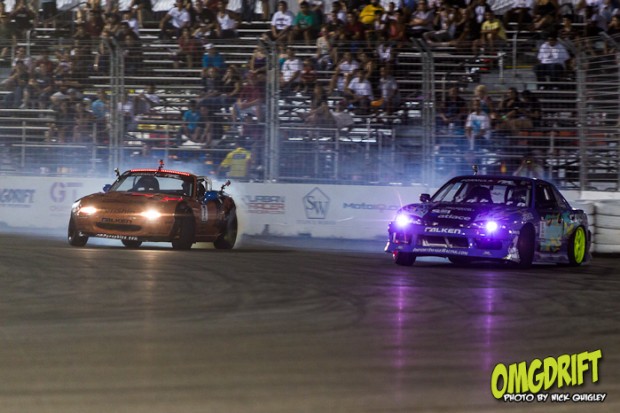 The team and I are gearing up for Irwindale and cannot wait. I drive Irwindale really well and can say it’s probably my favorite track on the whole Formula Drift circuit. We are going to keep pushing for that podium finish! Thank you for your help and support and I hope to see you all at Irwindale!
– Walker Wilkerson