Last week I attended an event to test out the new Forza Horizon release from Turn 10 Studios and Playground Games. After first seeing the game at this year’s E3 convention I couldn’t wait to see the end result. Admittedly I am not much of a gamer so I asked resident gamer, Brandon Scarpelli aka “Scarpeezee” to provide his viewpoint on the new title. Check it out the review along with some behind the scene photos from the special media event held at Auto Concierge in LA. 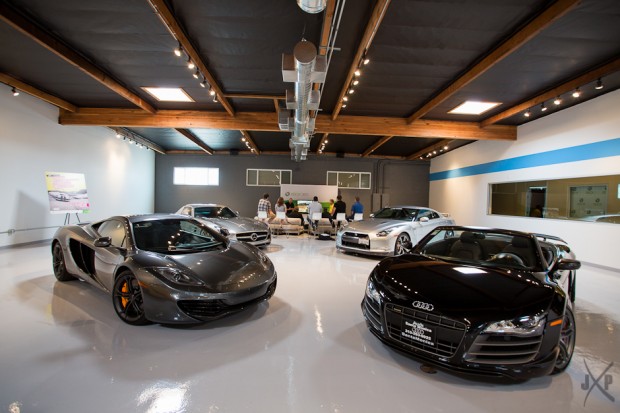 Over the past 11 months, Forza Motorsport 4 has reshaped the automotive gaming world by providing one the most realistic and fastest growing sim games I’ve come across in a long time. 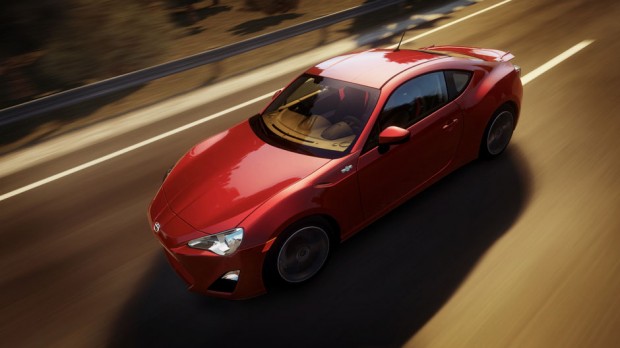 Following the success of FM4, the team at Turn 10 is set to launch its latest creation, Forza Horizon, on October 23, 2012. During a private media briefing, Turn 10 Creative Director Dan Greenawalt gave some excellent insight on the game and what we can all expect. In typical Forza fashion, we surrounded by a fleet of exotic super cars ranging from a Ford Raptor to a SLS AMG, Audi R8 GT Spyder and McLaren MP4-12C and more. 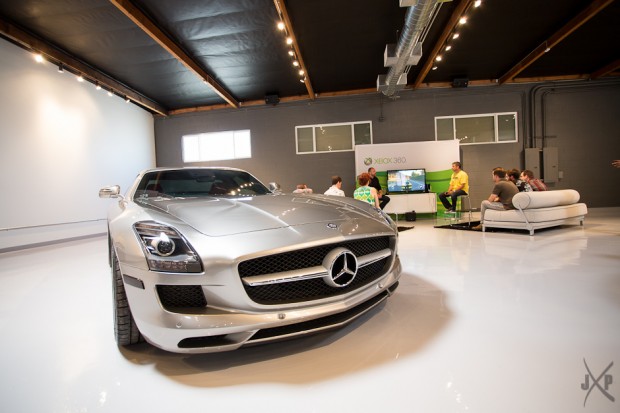 Dan kicked off our session with a quick briefing on the game, what their goals are and how they plan to continue their success. 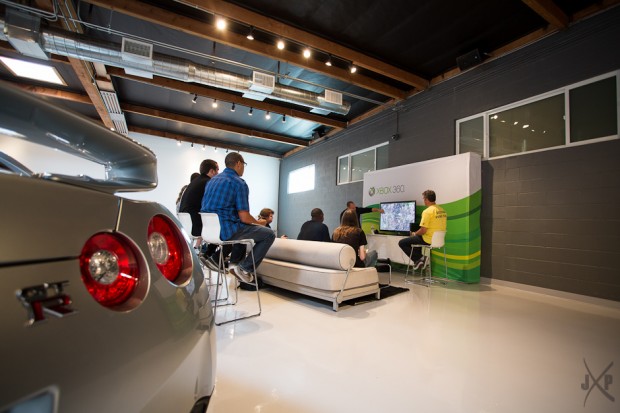 Before I knew about Horizon, one of the most requested features that I’ve seen fans asking for is allowing an open-world experience instead of only being given a variety of world-class race tracks to chose from. Well, we asked and Turn 10 is going to deliver. Forza Horizon is centered around a music festival, very similar to Coachella, in Colorado that provides a very diverse environment and roads to drive while providing the open-world exploration that fans want. Turn 10’s vision is to help bridge the gap and turn car lovers into gamers and gamers into car lovers. 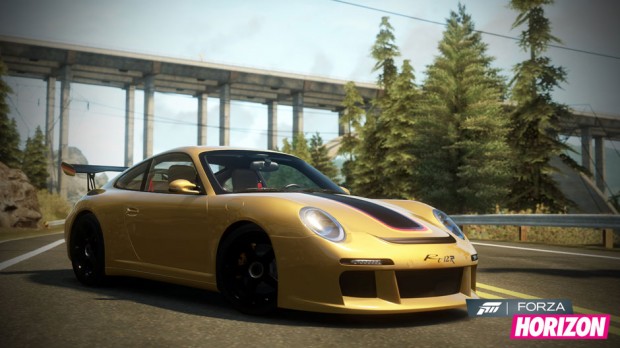 As soon as I had the opportunity to play, I could immediately tell that this was no ordinary arcade style game. That is exactly what Turn 10 is shying away from. Generally, cars become useless as you progress through the game due to how much better or faster the new car is compared to what you began with. Similar to FM4, every car has the potential to win depending on its upgrades and setup so no cars end up becoming disposable. The same physics and graphics are carried over from FM4 so it’s safe to expect the same authenticity and depth from Horizon that we’ve become used to. The same upgrades for cars are available but they do remove just a few of the modification settings. 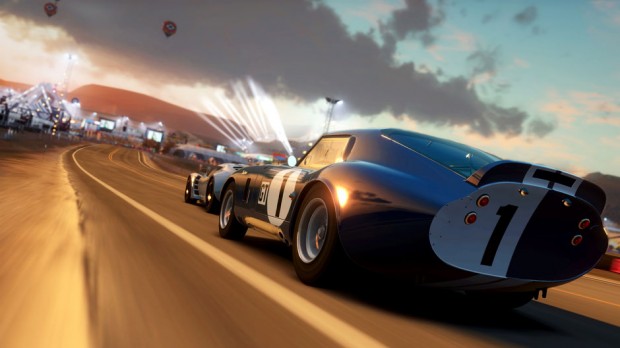 With this being an open-world environment, the actual game play is very different from FM4. There are hundreds of events taking you through farmland, deserts, snowy mountains or industrial areas as you challenge other drivers on the road or follow the set challenges of the game in order to achieve more festival wristbands. In FM4, there was a specific section to do the rival challenges or play any multi-player games whereas in Horizon, every event can be played in rival mode or multi-player. This makes playing tag, virus or other multi-player games much more enjoyable. 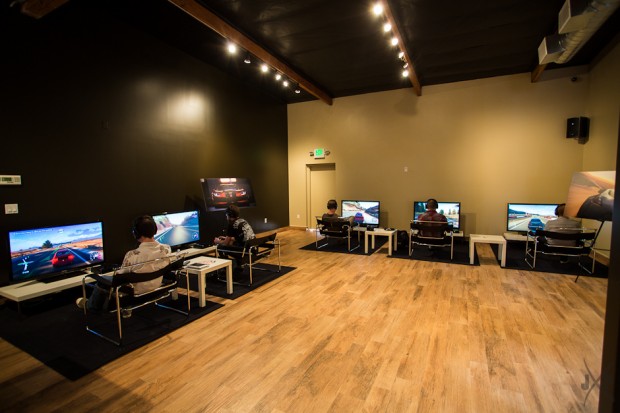 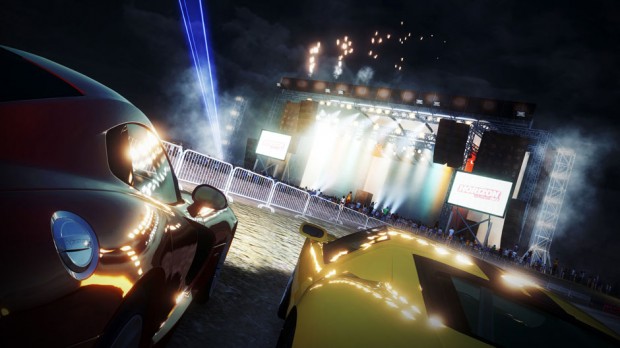 Now that Forza Horizon allows for users to go off-road, you’ll experience 65 different surface types courtesy of the same developers who created DiRT, Race Driver: Grid and Colin McRae rally games. Depending on the surface you’re on, you’ll notice everything from how the hood shakes to the amount of traction you have. 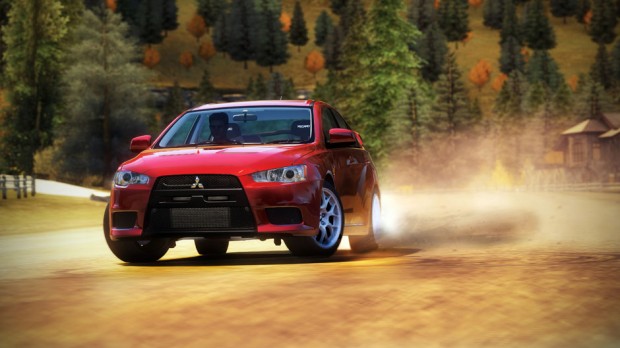 One of the first races I was entered into was a Showcase Race. I was put into a classic Boss Mustang racing through the canyon while a P-51 Mustang chased me down. As soon as I beat the P-51, I was drifting my way to the next race when I stumbled upon a barn that had a BMW M1 tucked away beneath a cover. Features such as ‘barn finds’ quickly reminded me that I was still getting everything I loved from FM4 but in a completely different format. 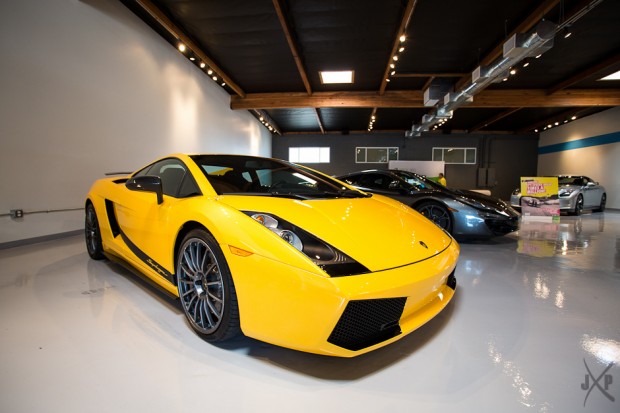 Another feature I feel is worthy of pointing out is the soundtrack for Forza Horizon. Like most people when playing a racing game, one of the first things I do when I start is completely mute the music. With the game being centered around a music festival, British DJ Rob da Bank was given the task of selecting a soundtrack worthy of racing to. Players are given 5 hours (60 tracks) of rock, indie and electronic music split up between 3 radio stations to choose from. It’s easily the best soundtrack I have ever heard for a video game. 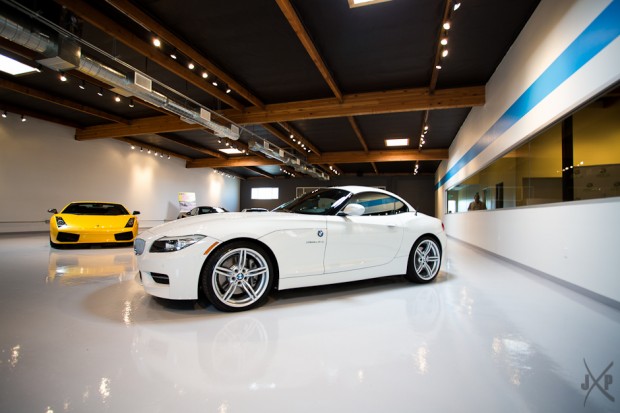 Existing FM3 and FM4 players should know that when you import your player profile into Horizon, you will be gifted cars depending on the level of your rank.

Overall, I think the team at Turn 10 has done an excellent job at producing a game that car lovers and gamers can all enjoy. It’s a perfect blend of that realistic FM4 experience but with the open-world exploration we’ve been craving.