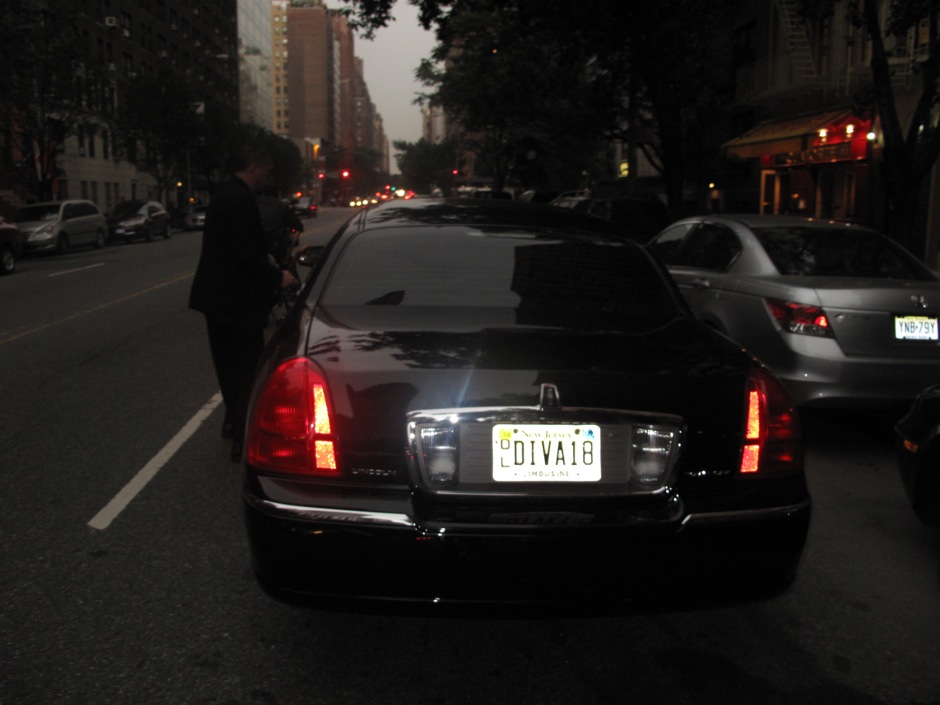 This was a special night ahead and I could say that my BFF Jilly decided to go in style, but the truth is, this is how she always rolls.  It was the Jay Z, Eminem concert at Yankee Stadium.  It was raining unexpectedly, but we were going regardless.  Jill and I popped into the car and headed to Serena’s hotel to caravan with the crew to Yankee Stadium. 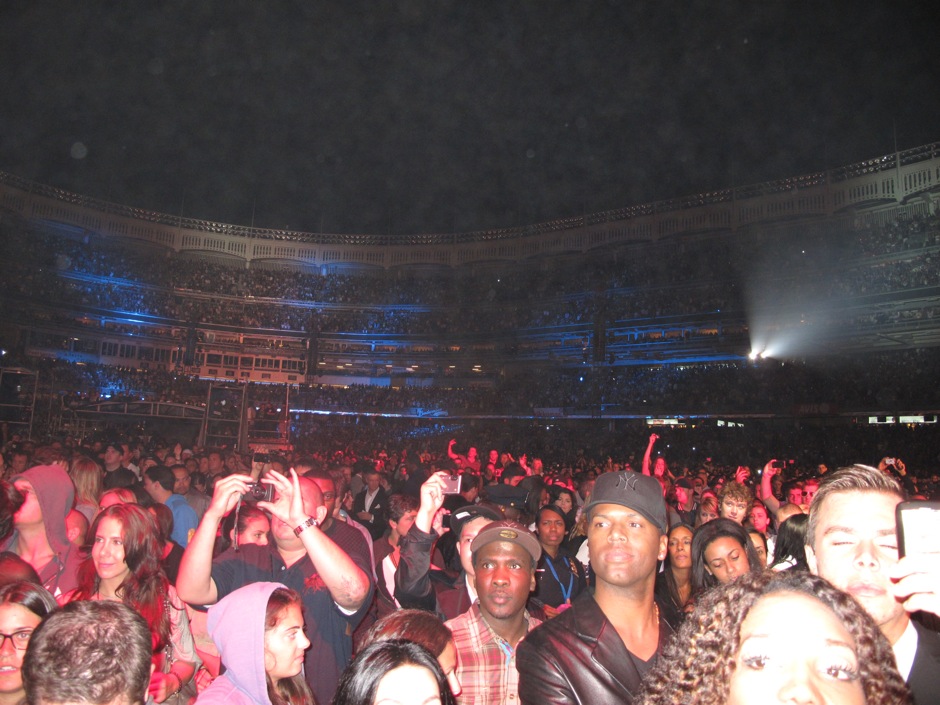 When we got there we all headed back stage to Jay’s backstage lounge.  When I walked in I saw LeBron, Gwyneth and Chris Martin, Traci Anderson (Madonna’s ex-exercise guru), DJ Clue, Fabolous, Amber Rose, Niki Minaj, and Veronica Webb -who some say I have the likeness of.  B.o.B.  was on stage as could see on the flat screens displayed throughout.  A full spread and open bar were being laid out.  If you know me, I am always up for food, but the food wasn’t ready so I headed to the bar.  Before I could ask for anything, the bartender quickly told me they weren’t serving for another 45 minutes.    Just know I am only telling you this story as it is one of my best ever. I said “not even water”?  At that moment, LeBron, leaning on the bar  said here you can have some of mine.  Immediately all of my resentment towards him melted away – my whole family is from OHIO.  He asked the bar tender for a glass who tried to say no, but LeBron said “you’re not serving me anything – give me one”!  Then he opened his already sipped bottle of Poland Springs water, poured half of it into a cup, and handed it to me!  it doesn’t get much better than that.  Soon after Eminem came on our entourage headed out toward the Yankee tunnel. 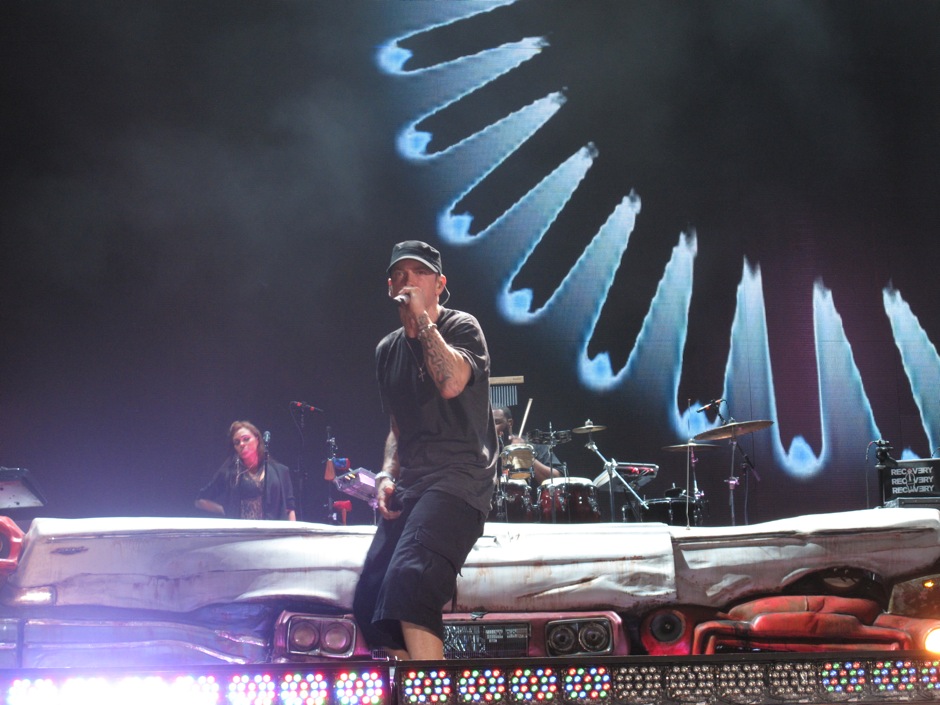 Not sure where we were going to be sitting, as some of us were in a box,  and some floor, but  we wanted to stick together.  All 9 (NINE) of us followed Carline Balan (Jay’s old assistant) towards the stage, as we walked in front of the blaring speakers, my body felt close to violated it was so loud.   She continued to walked us through the swarming crowd to the FRONT ROW & CENTER!   Now, I was there to see Jay Z.  I have liked, and sometimes really liked some of Eminem’s song’s, but I never was a “fan”.  However, Rob, told me he has sold more music than MJ or the Beatles.  Now I thought Mariah had that title.  He also told me that Eminem is now sober, or so he says.  I guess this is why it said recovery on the stage.  With this new Eminem knowledge, I was very interested in what he had to bring. 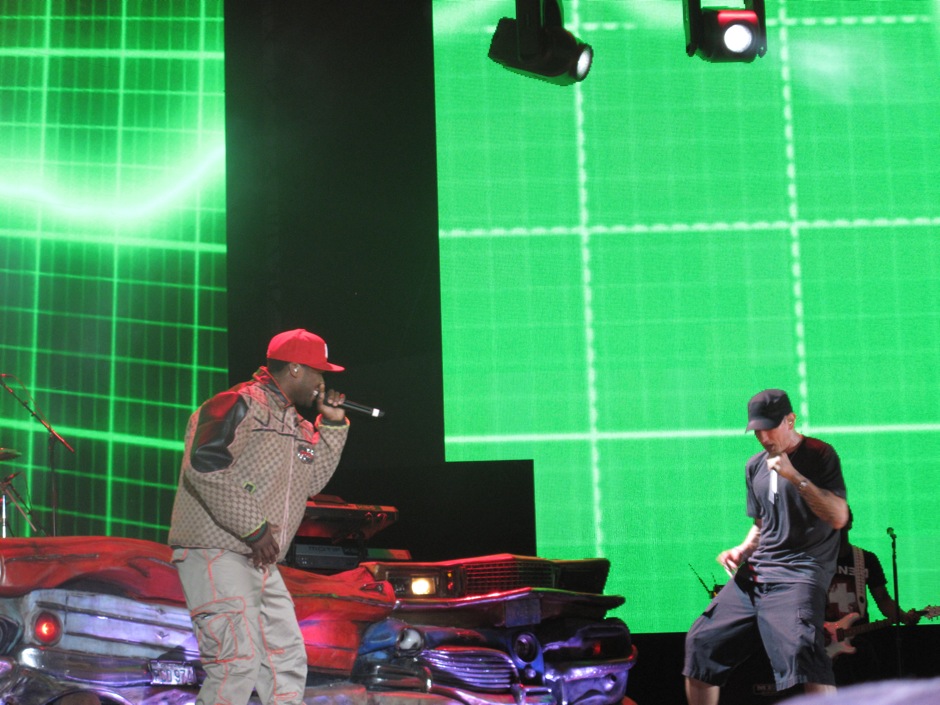 Soon after the concert started, Eminem brought on a guest. I asked Sasha if it was Gucci Man!  He didn’t think it was funny, but it wasn’t meant to be as I was serious. 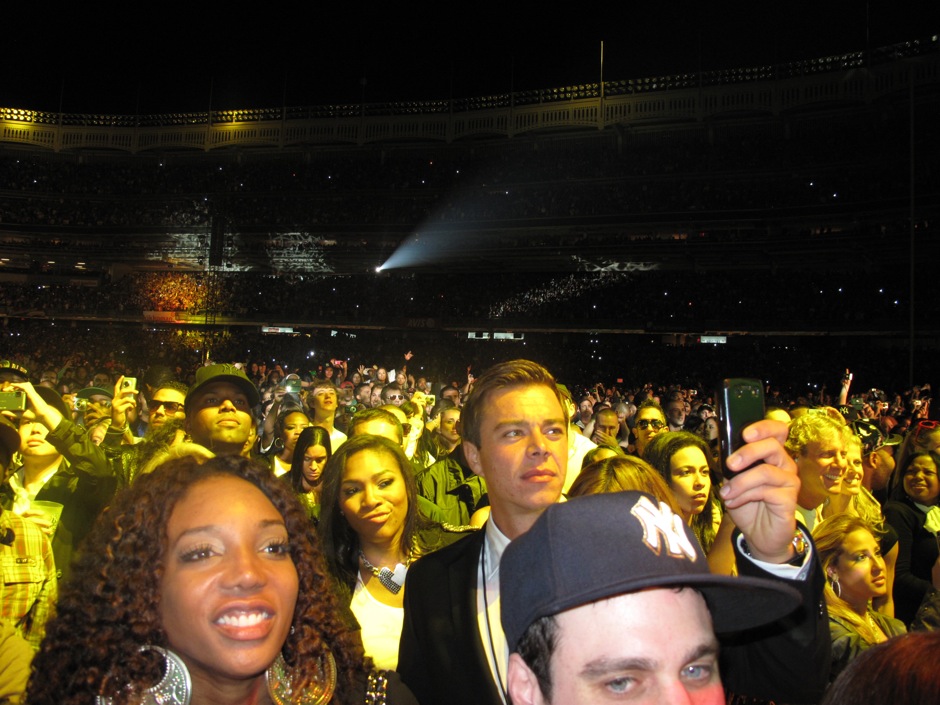 Serena – wondering what 50 was going to bring, but after “Hey it’s Your Birthday” came on, the crowd was showing nothing but love. 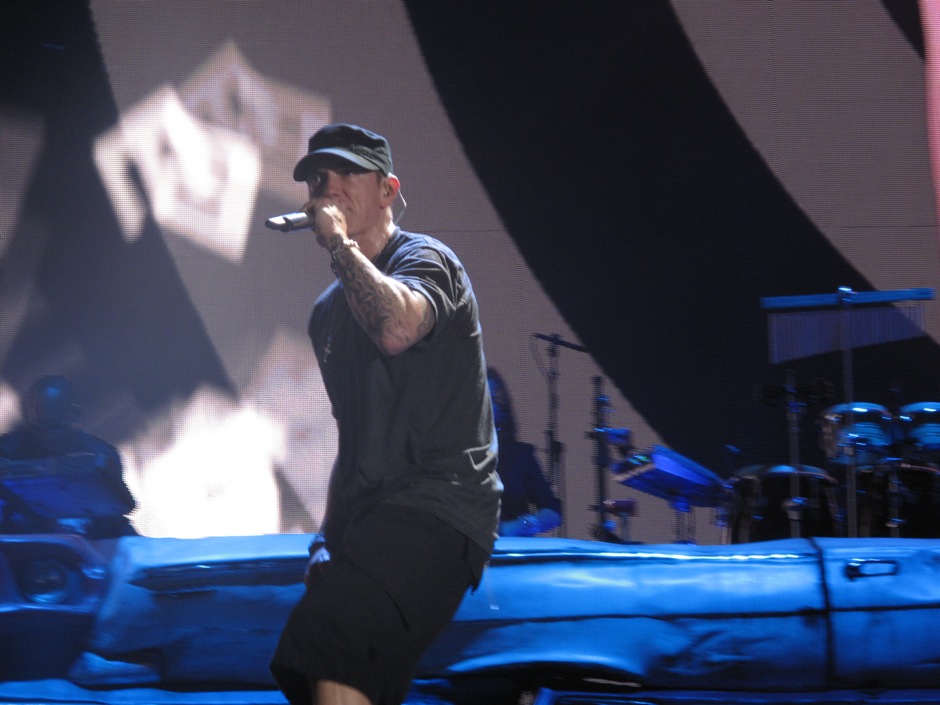 There is no getting around it – Eminem is talented! 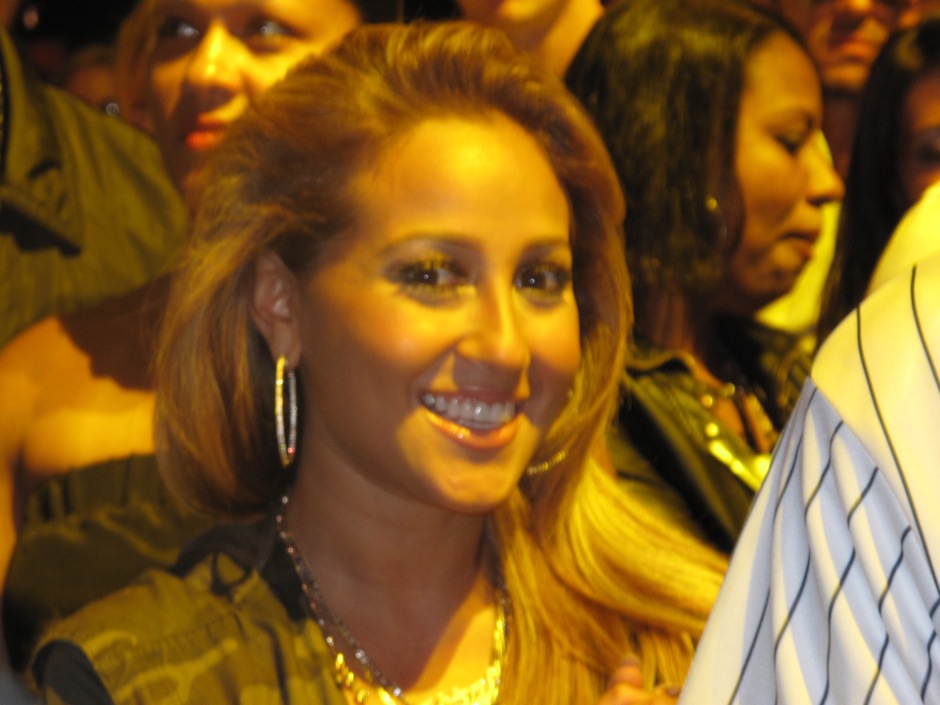 My new friend Adrian Bailon who I recently directed in her virtual video shoot for Cameo Stars.  I’ll let you know when they are up and running 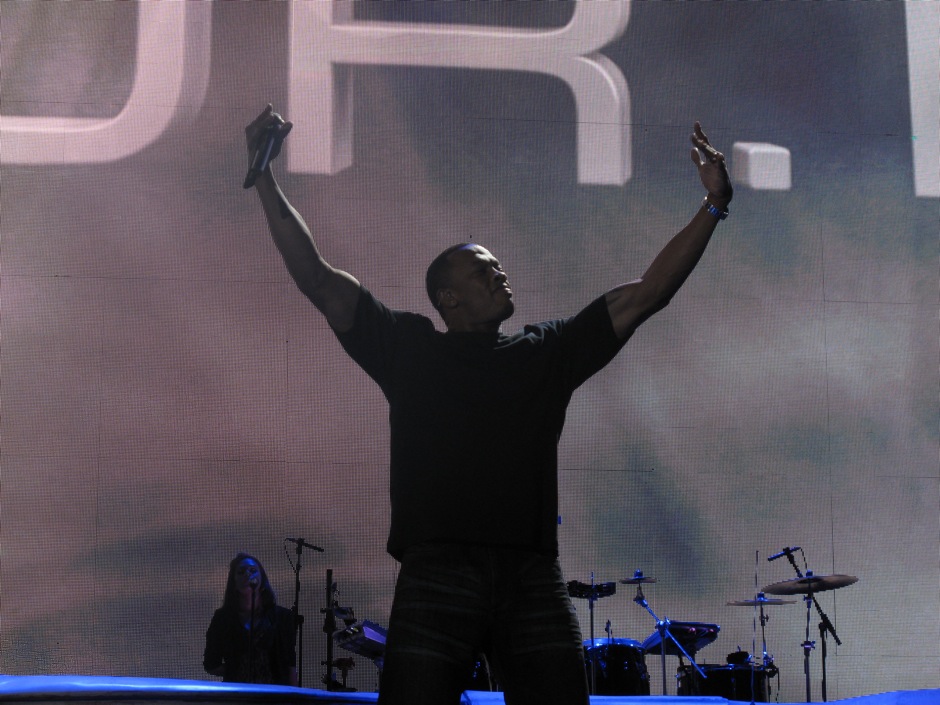 Dr. Dre – he may be old but classic.  He was so much fun.  All of the great songs and artists he brought to us (Eminem).  He said new work was on it’s way and he won’t let us down! 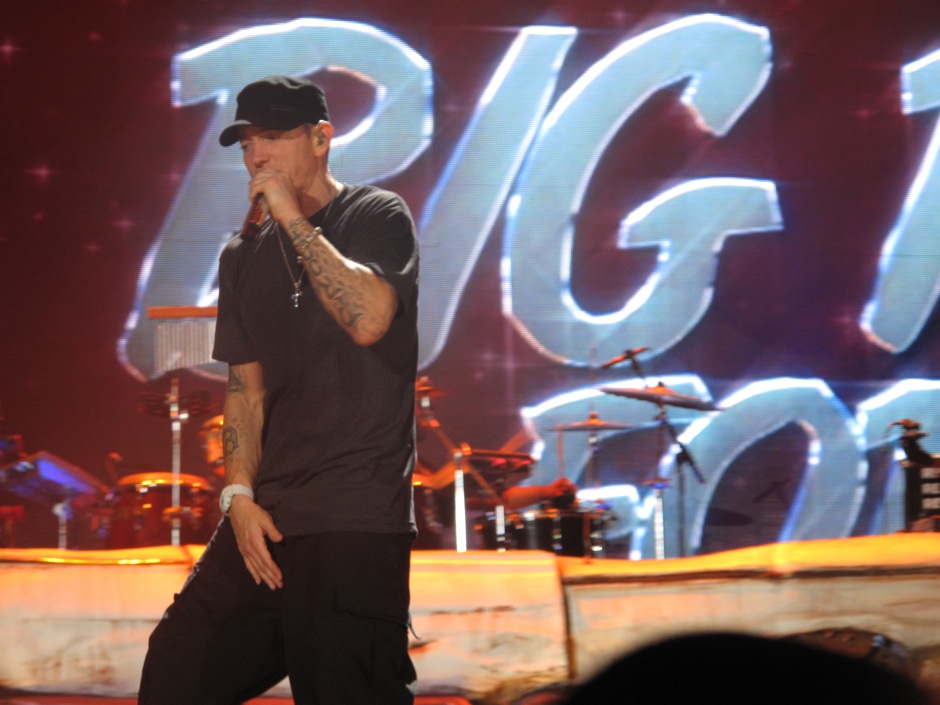 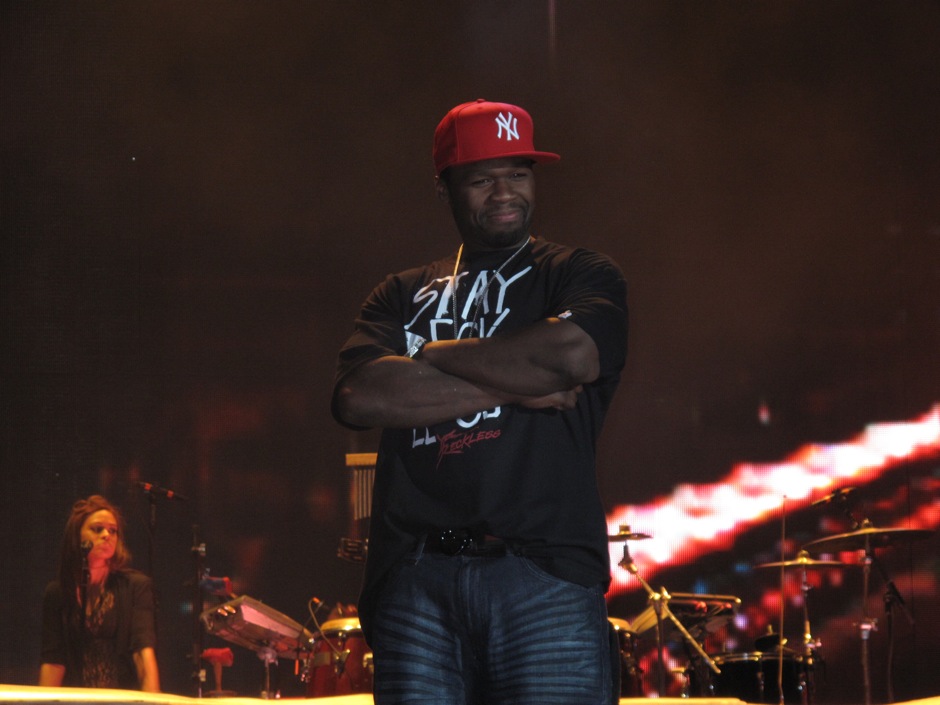 Eminem, Dre, and 50 together in a medley. 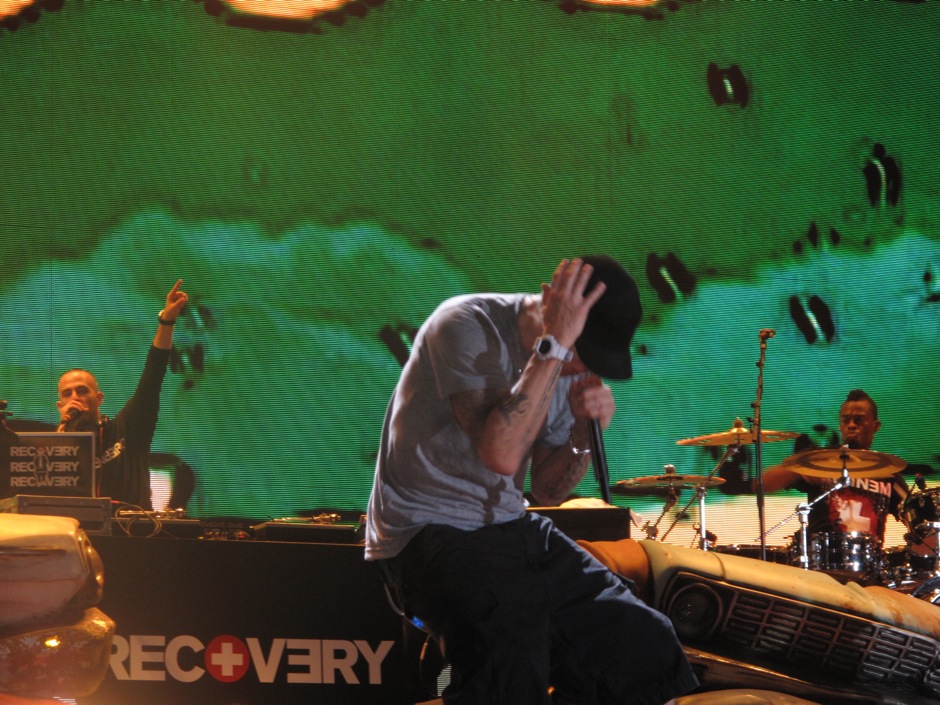 My favorite picture and not sure why.  Learning to take shots. 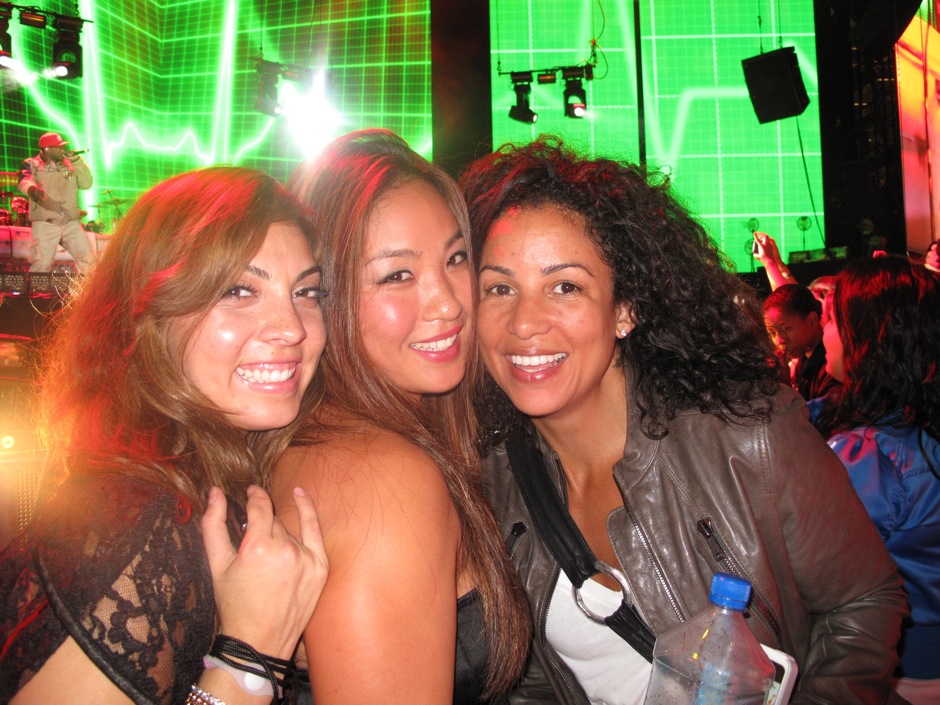 Valerie, Esther, and Myself.  Having an amazing time.  All of a sudden, someone had to pee.  I still don’t know who, but we started to leave – all 9 (NINE) of us.  Me being the most independent of the group,  was hesitant to leave.  I mean, who wants to loose their FRONT ROW spot?  I stuck with the pack back to Jay’s private lounge.  The food was up.  I was definitely ready to nosh and a quick reset.  Eminim finished his last song and the concert went to break.  Next Kanye, Naomi, Diddy, and Drake came in to join.  What else can I say? 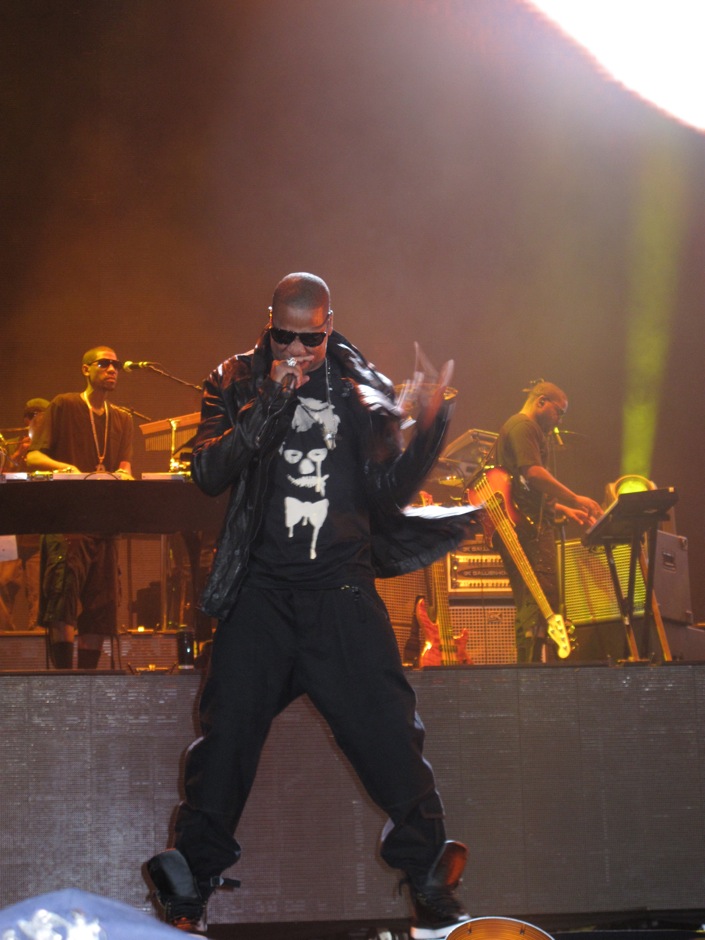 Some how, some way,  All 9 (NINE) of us made it back to the exact same spot.  I do not know how this can be done twice, but it happened.  It was like the people in the FRONT ROW expected us to be there.  NOW it was much more crowded and the energy was way more intense.  Jigga Man was on stage. 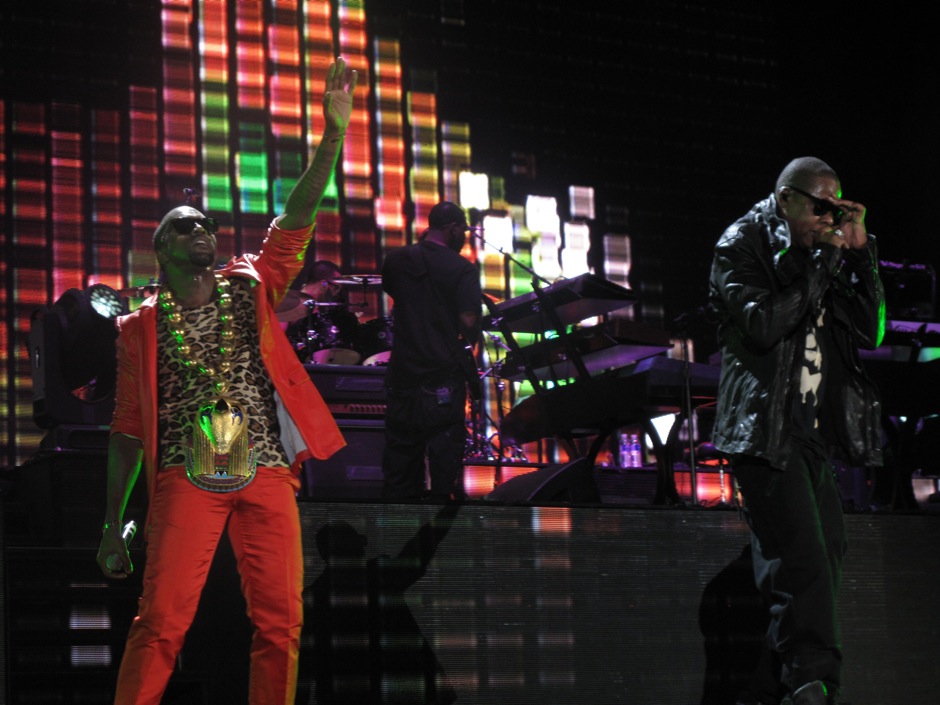 Kanye joined Jay and played my all time favorite Kanye song.  I love Kanye and all of the drama that comes along with him, but of course (as always) he over stayed his welcome. 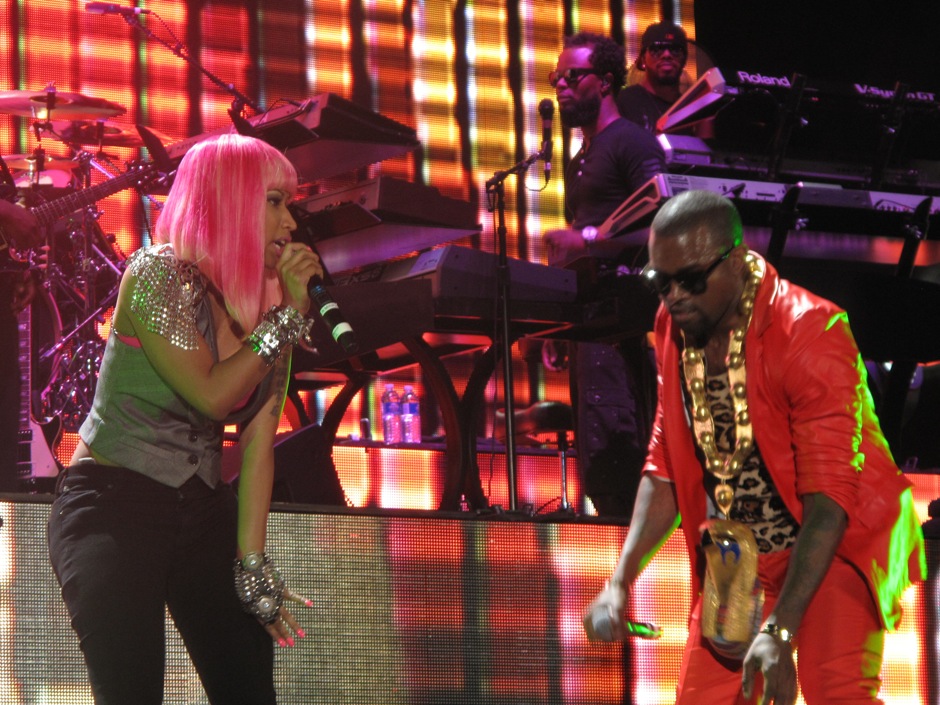 HOT PINK Niki Minaj joined.  She and Amber Rose had the same hair color. I am not sure what that means or what else they share. 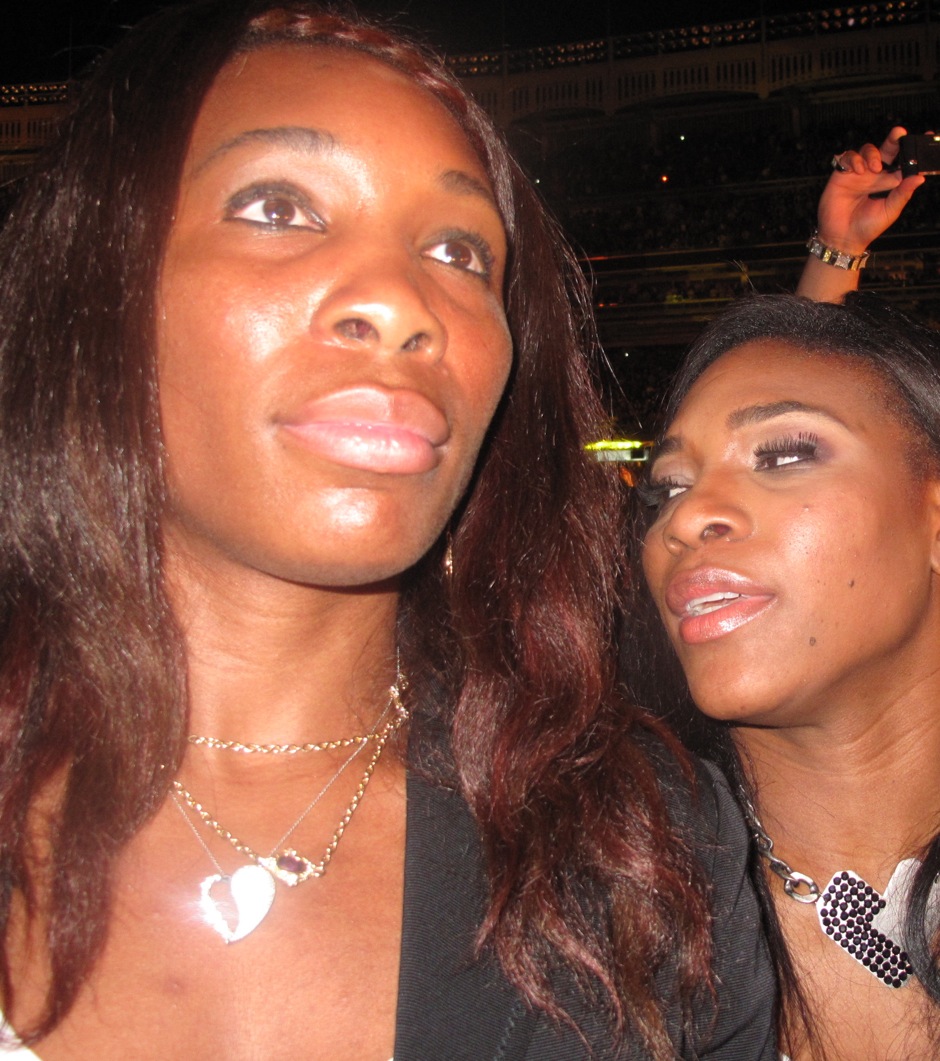 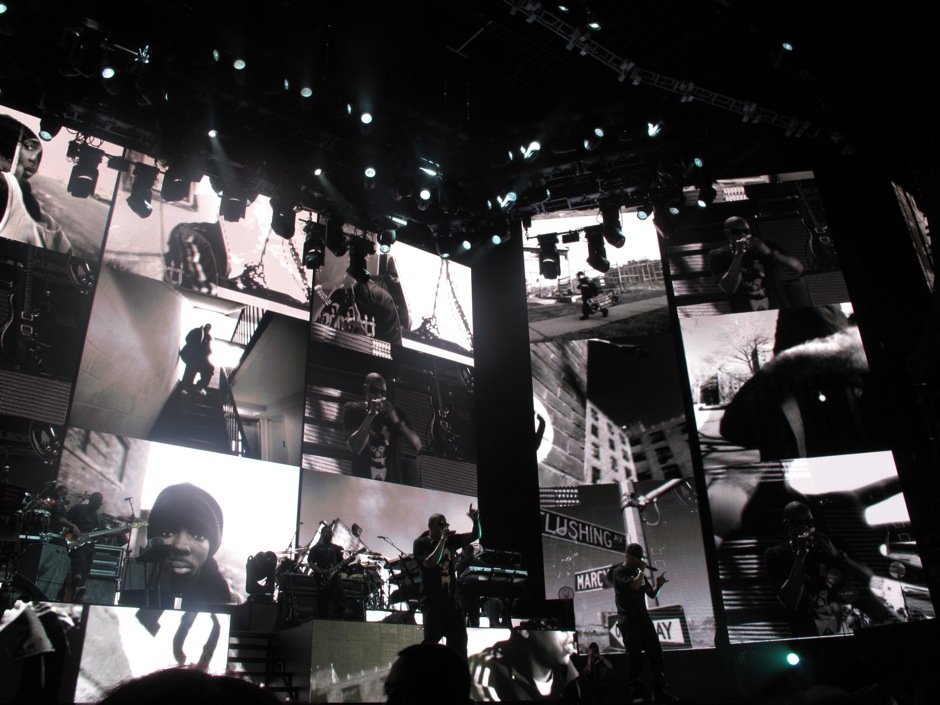 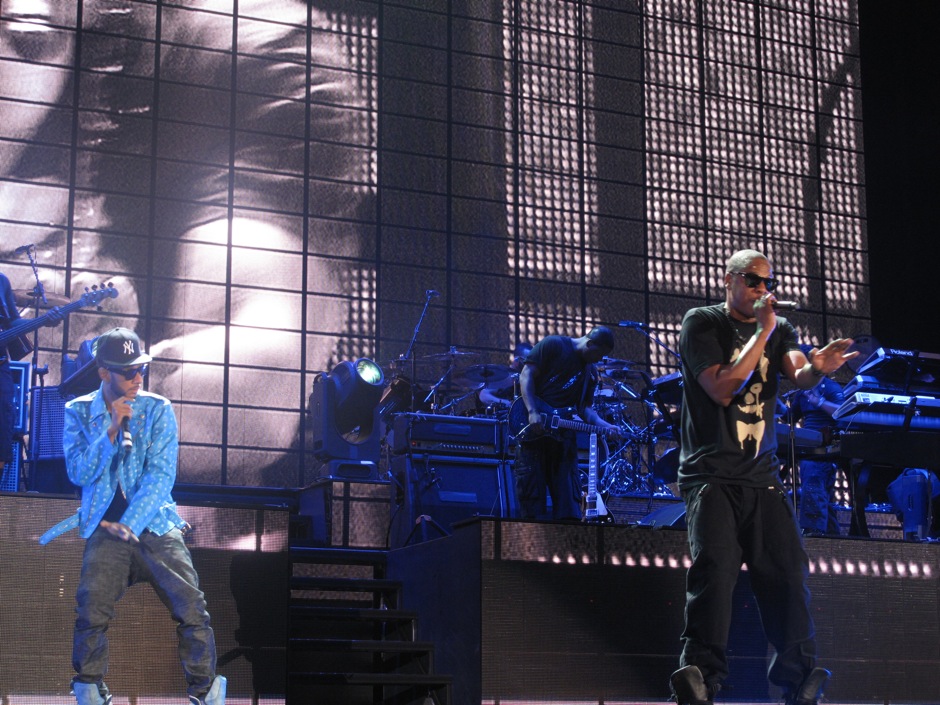 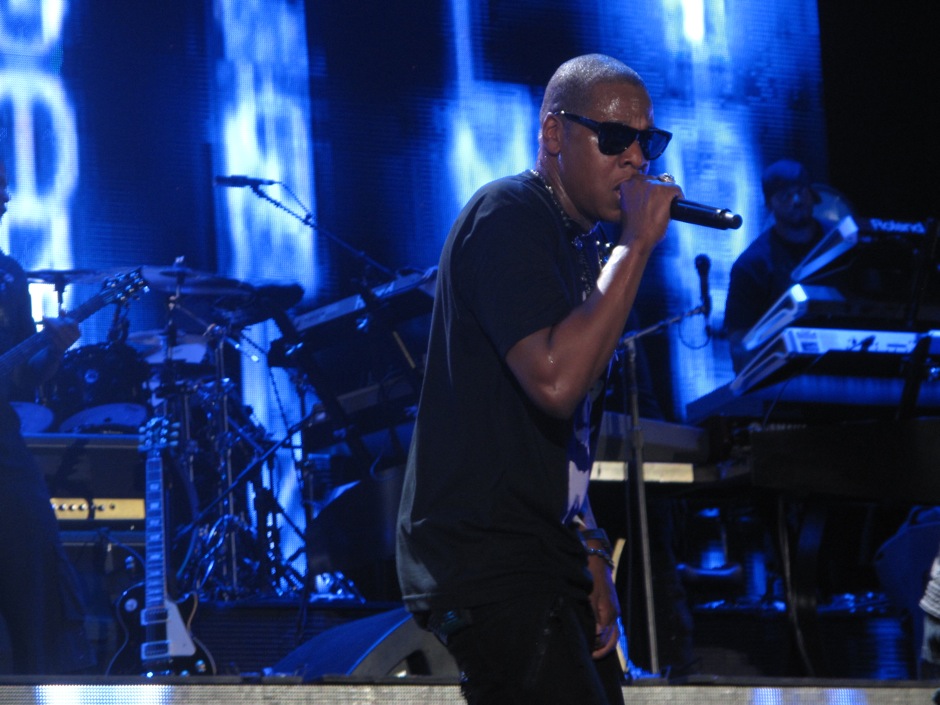 Jay kept on saying “THIS IS HISTORY, THIS IS HISTORY”.  He said it meant more to him than ANY Grammy or MTV award he has ever received.  He was really taking in the moment – letting us know how he wanted to make this night happen for all of us and what he had to do to get it done. Drake man.  It’s always more fun to see someone perform after you have met them personally. 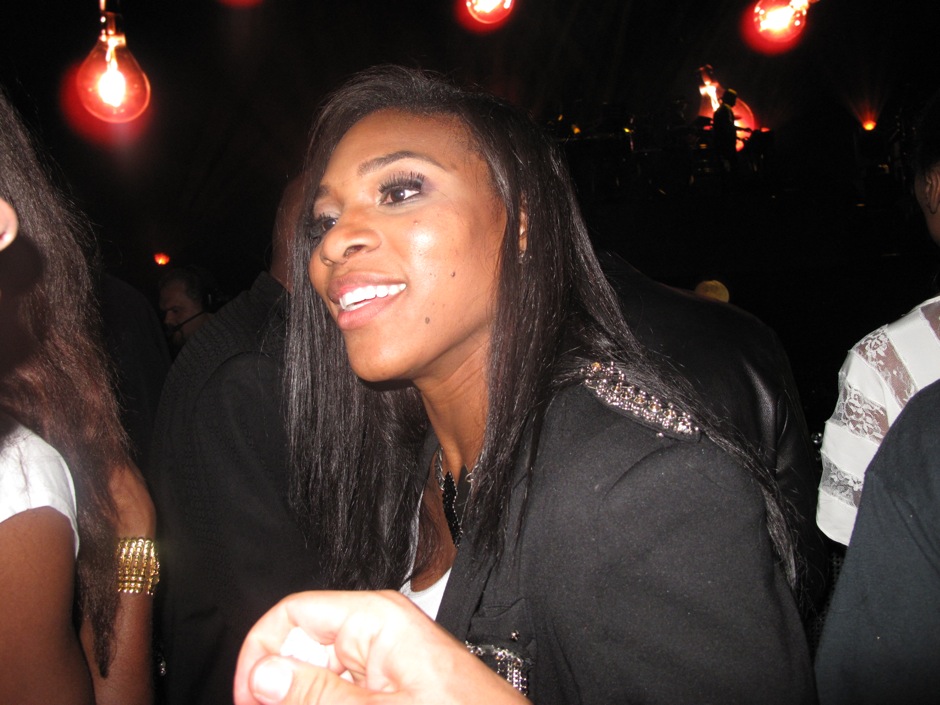 Serena – happy with the Drake performance. Beyonce making the elegant appearance (that we were all hoping for), but keeping it about her husband.  She sang forever young.  I was truly hoping for “Crazy in Love”  This is the only time we saw her. Empire State of Mind wasn’t the encore, but Jay played it in time for all of the people who wanted to beat the traffic.  I think he may have even called them “lames”.  I thought we were a lame as we left the FRONT ROW right after this song, but we went back to the lounge to say good bye’s and watch the rest of the show on the flat screens.   When it was over, Jay Z came in with all of his peers standing, clapping, and cheering.  I truly think he was amazed and humbled by the night.  He came around and started to individually thank his friends.  Sitting on a circular bench alone, perfectly positioned,  I was able to be included in this small group and receive a “thank you for coming”, a smile, and a sincere hand shake. Now I have done a TON of really cool things.  I have stood on stage with the Rolling Stones at the O2 in London and even went to Mick Jaggers birthday party, but I must say that this was one of the coolest nights – YET!!!!

4 thoughts on “Front Row with Jay-Z”