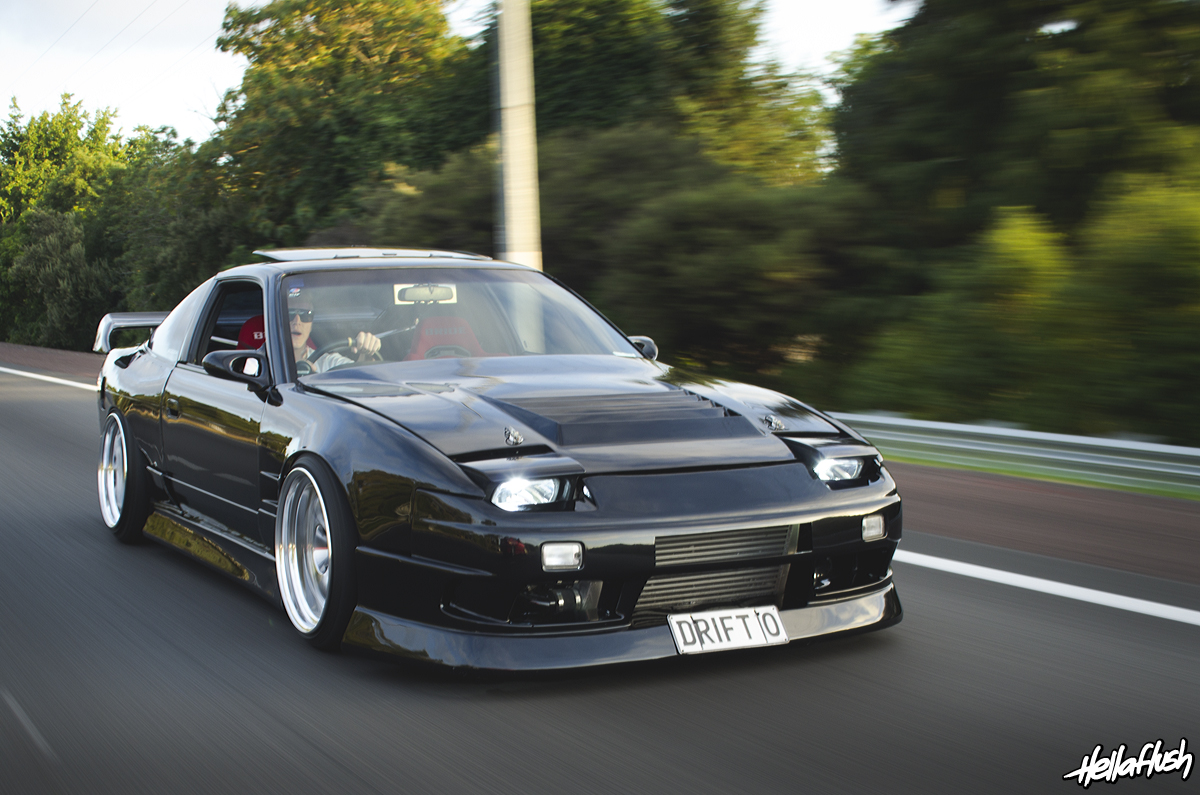 HELLAFLUSH: Hello David! Where are you from, what do you do, what got you into cars?

DAVID: Hi guys! I’m from Auckland, New Zealand. I currently run my own IT consultancy company called Davro Solutions Ltd. Until I turned 15 I had absolutely no interest in cars, however one day a friend from school took me for a ride in his R32 Skyline. It was then that I knew that I wanted, uhh, needed to get my own turbo rear wheel drive car. Then I eventually bought my first car, this Nissan 200sx. 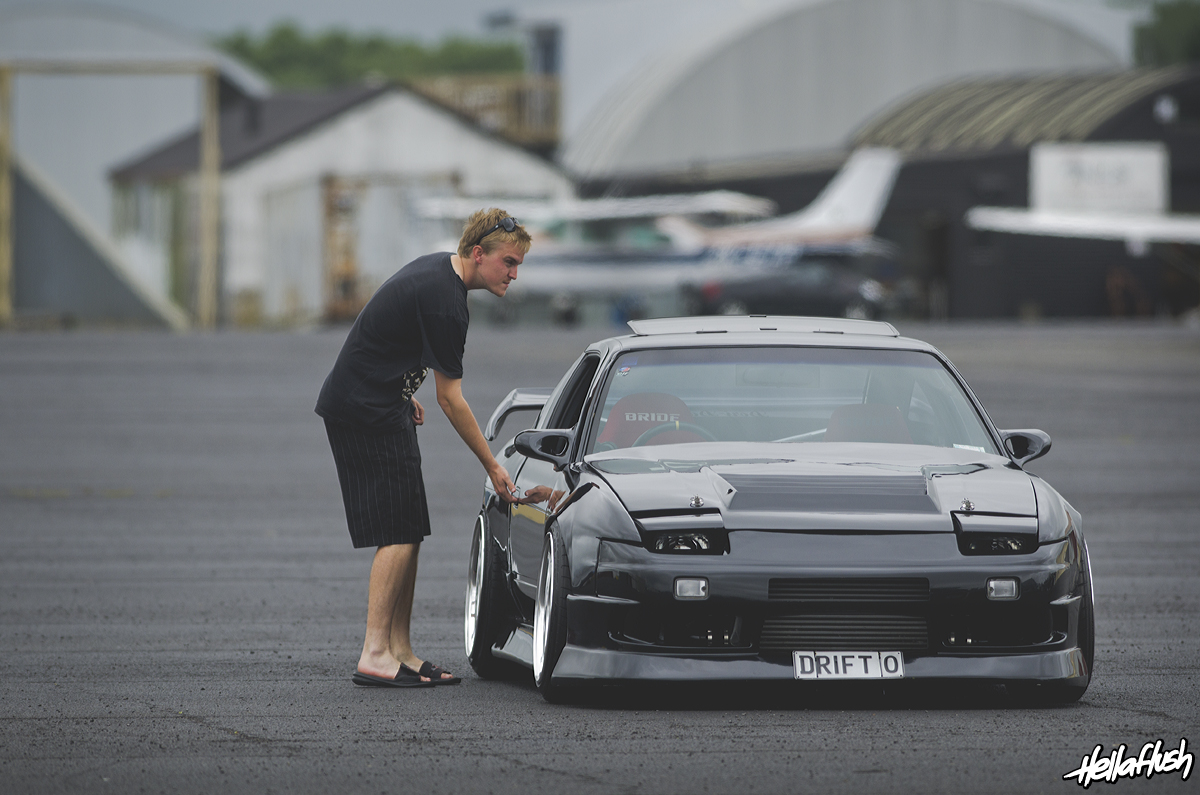 HF: How long have you had the car for? And how long has it taken to get it looking like this?

David: I bought the car when I was 17 years old back in 2004. At the time the car was a completely standard silver 1.8litre turbo rear wheel drive car, which I knew very little about. But after a fun test drive I decided to buy it. I have been modifying, changing and molesting this car since the day I bought it and so much has changed over the last 8 years. 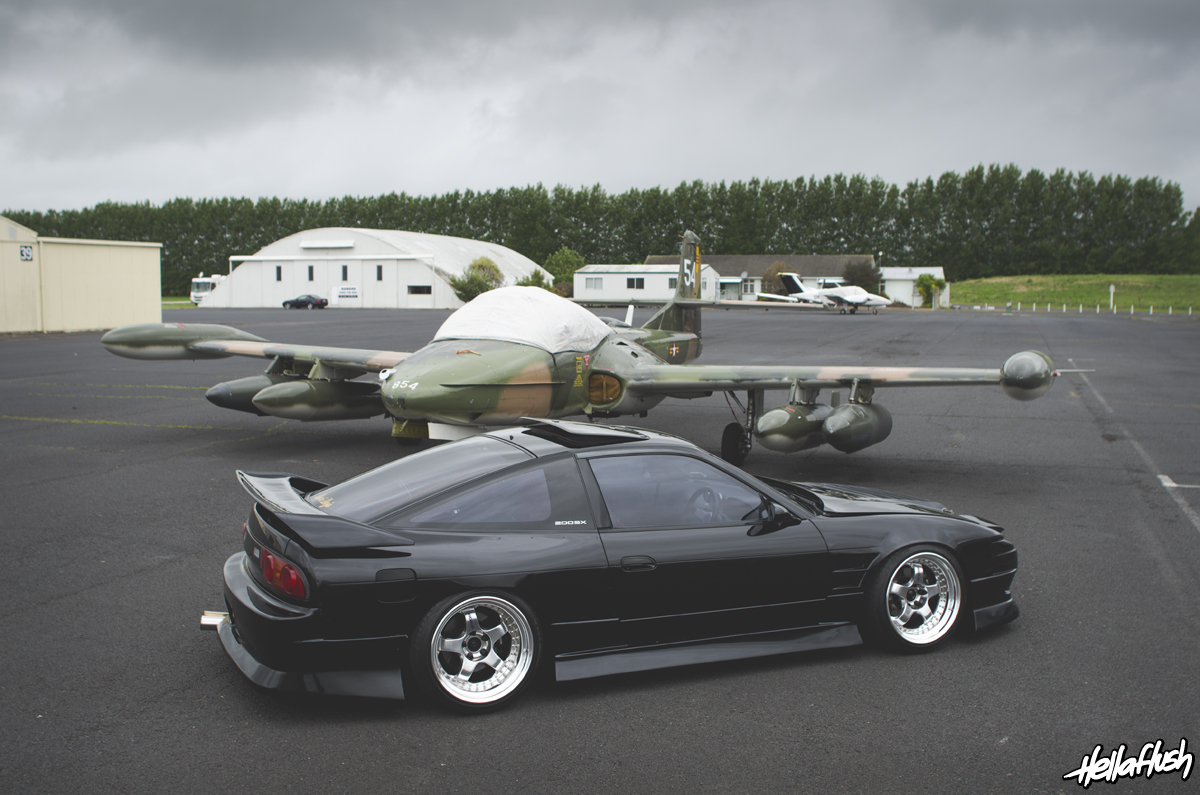 HF: What made you purchase those beautiful Work Meisters from Japan rather than much cheaper, bulk produced wheels that are available locally? Do you believe its important to support innovative & genuine business?

David: There were a few reasons I decided to buy brand new wheels from Work. I had been searching for the perfect size/offset wheels in NZ for quite some time, and had ended up with different pairs of almost-perfect sizes and offsets. However I was struggling to find a set which I really loved and in the condition I wanted. I have always had a soft spot for the traditional Work Meister S1. After months of being undecided, one day I ordered some a set of brand new Work Meister S1 in the perfect sizes and offsets and in a Bright Buff Finish (polished). For me, I have never been a fan of copied/cheap wheels. Not only do they usually look slightly different to the trained eye, but they are obviously not built with the same quality as Japanese made wheels, not to mention the lack of sizing options. Obviously there is some enjoyment in having custom made wheels, and the exclusivity that comes with buying brand new wheels from Work. 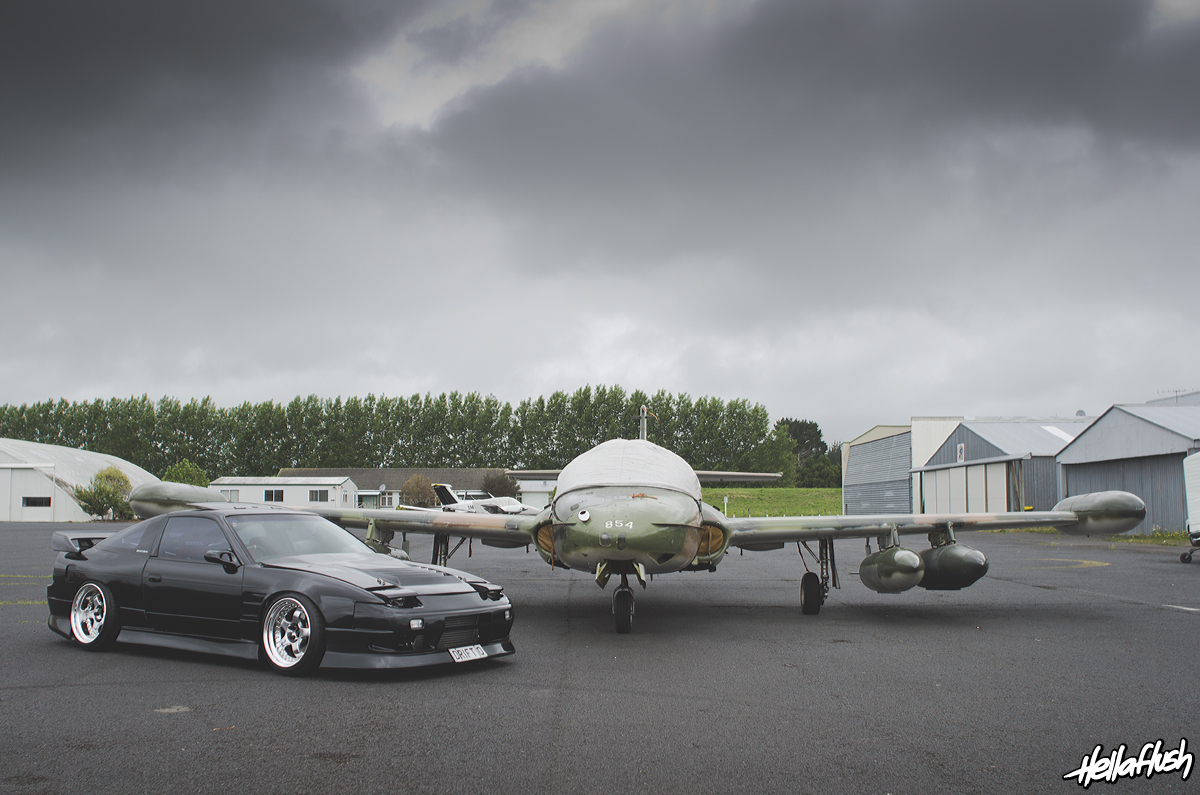 HF: I noticed the car is still powered by a CA18DET, most tuners tend to use the SR20DET. What was the thinking behind this decision?

David: This all started a very long time ago. Shortly after buying the car, the original CA18DET, with only 120,000km on the clock, was having some issues and I was faced with the option of rebuilding it, or replacing it with a SR20DET with similar kms. Back then I used to drive this car every single day as my work car, doing around 30,000kms (and having very little knowledge of the Nissan engine range) I decided that for reliability reasons I would fully rebuild the dirty old CA18DET. This included forged pistons, shot-peened rods and freshening up the rest of the engine. It was from here that my CA quest began. The more I modified my CA, the more I came to love it, and with the help of my car tuner, we have managed to get a solid 240KW at the rear wheels, while still maintaining very good response. I love the fact that it is different from the more traditional SR20DET engine. Plus, in my opinion, the CA has a very nice sound to it. 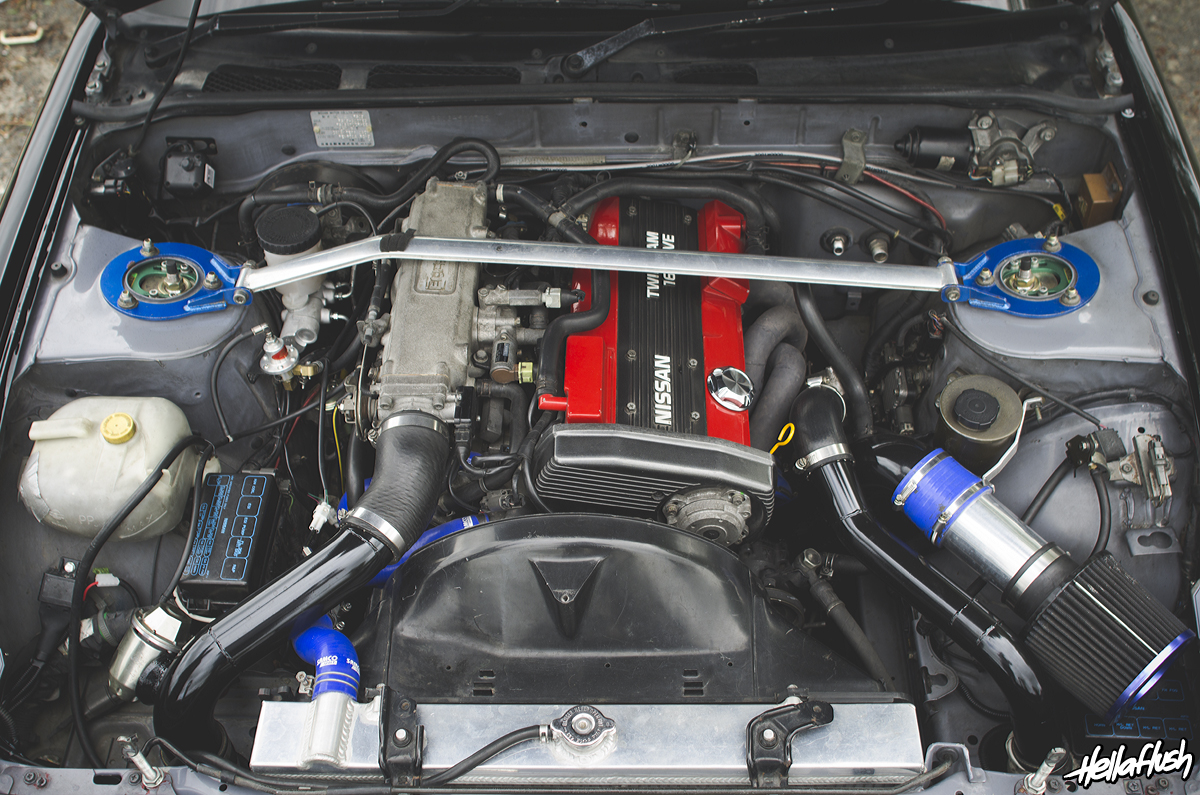 HF: Is the car still street legal? Do you think its important to be able to use cars like this on the street? Do you prefer flying around a track sideways or cruising along the Auckland streets on a sunny afternoon?

David: I have changed my mind about this topic more times than I can remember. Some days I think of making into a dedicated track car, other days I go out for a cruise on the streets and love every second of it. The car is road legal at the moment, and I find more enjoyment in cruising with friends to and from cafes or motorsport events. As you can imagine, a car like this is difficult (in NZ anyway) to keep road legal. Who knows where the car might end up in the future. 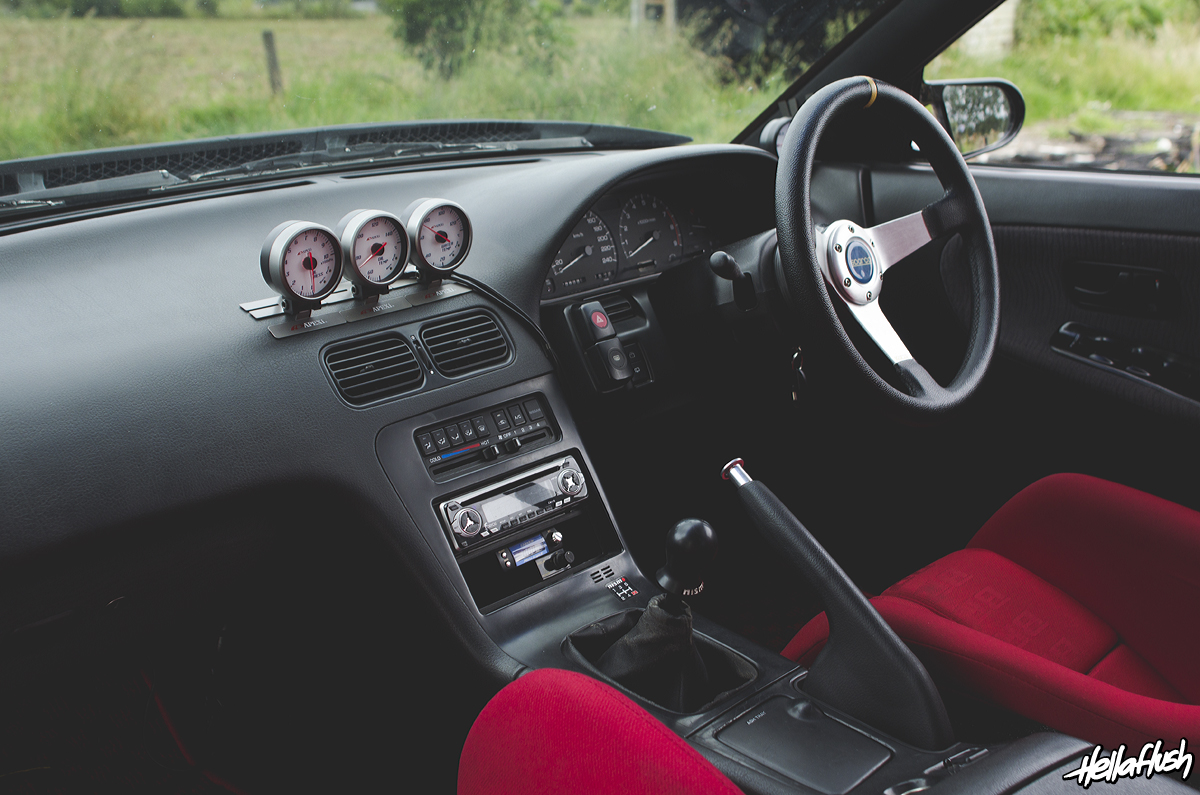 HF: Have you thought about competing in drift events with the car?

David: When building the car, this was all I could think about! The car has seen around 10 grass-roots drifting track days since I have owned it, but I have never made the step up to a competition level. It is more difficult these days in NZ to have a street-legal competition drift car because of the requirement for harnesses and roll cages in competition. At a recent drift day I found myself unable to concentrate properly due to fear of damaging my new wheels, the super low-hanging BN bodykit and fresh paint job. I think my heart is on the streets. 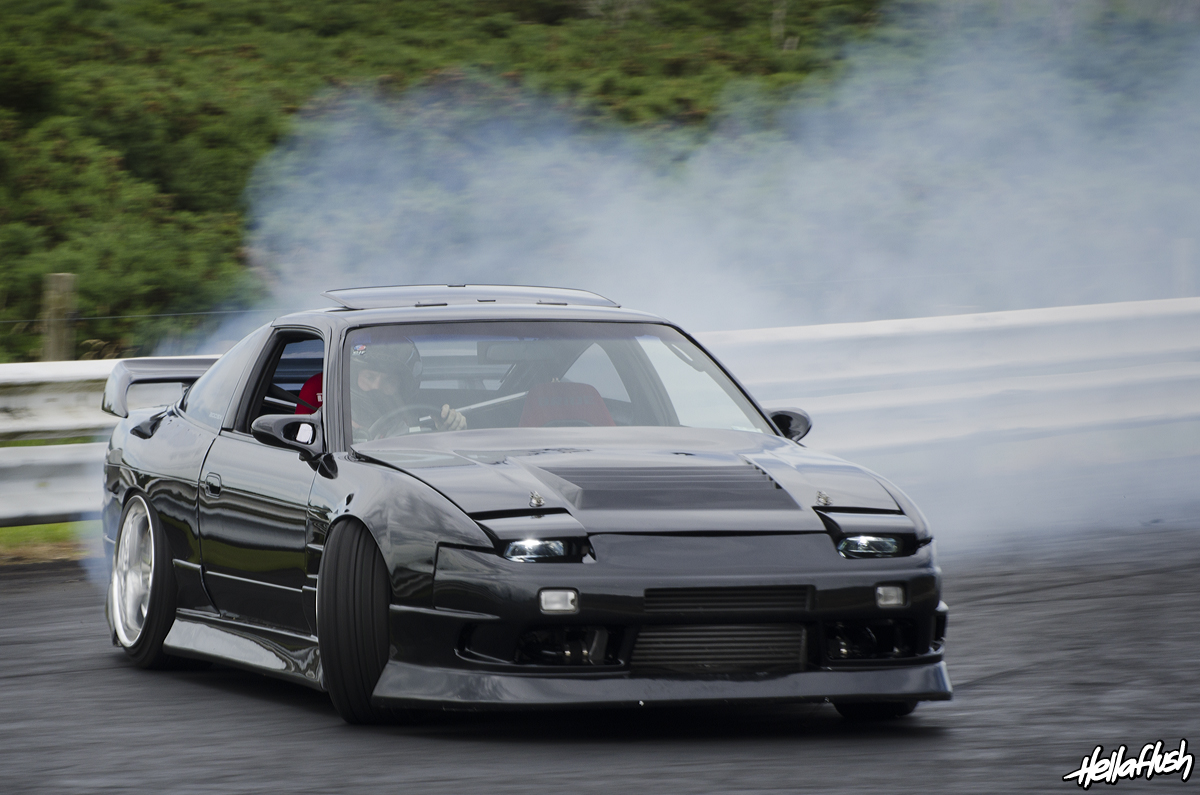 HF: The car has attracted a lot of attention both locally and abroad, are you surprised by this?

David: The attention the car seems to be getting locally is more exciting to me than surprising. There was a lot of planning and discussing with friends as to the best way of making this car look as good as possible. Having owned the car for so long now – and changing my mind on wheels, aero and interior many many times – combined with inspiration from other similar cars worldwide, I had only but hoped the car would have an impact on the international scene. 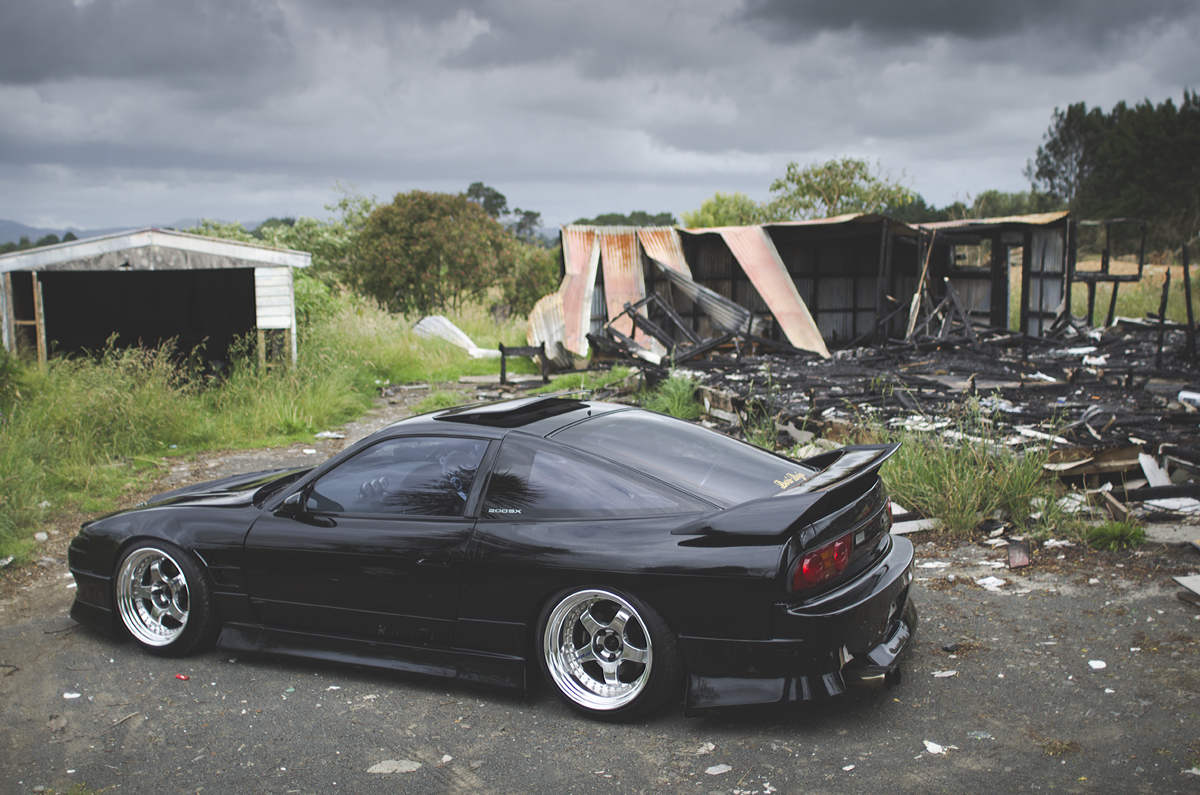 HF: Because building a car like this is such a long process, do you eventually realize what you have created? Or does it just look the same car you have owned for the past 9 years?

David: I don’t think it has fully hit me yet how much I have changed the car. When I see it in the garage I am often amazed at how different it looks compared to when I first bought it and sometimes find myself stuck in a trance while staring at it. The memories of the blood, sweat, and tears gone into the car is what helps me realize what it is that I have created. Having modified it over so many years, I have been lucky enough to experience the changes/learn the car along the way. HF: What do you love most about cars and the scene in New Zealand?

David: My favorite thing about cars – and the NZ car scene – are the adventures and people I’ve met along the journey. Starting off with no interest/knowledge in cars, my 200SX and I have come so far and made so many good friends along the way. Both through local car clubs like s-chassis.co.nz or random car enthusiasts who come and say hi. Also being an avid drifting fan, some of the best times of my life have been hanging out with friends at various D1NZ series events over the years. The cars in NZ are cool, but the people are easily cooler. 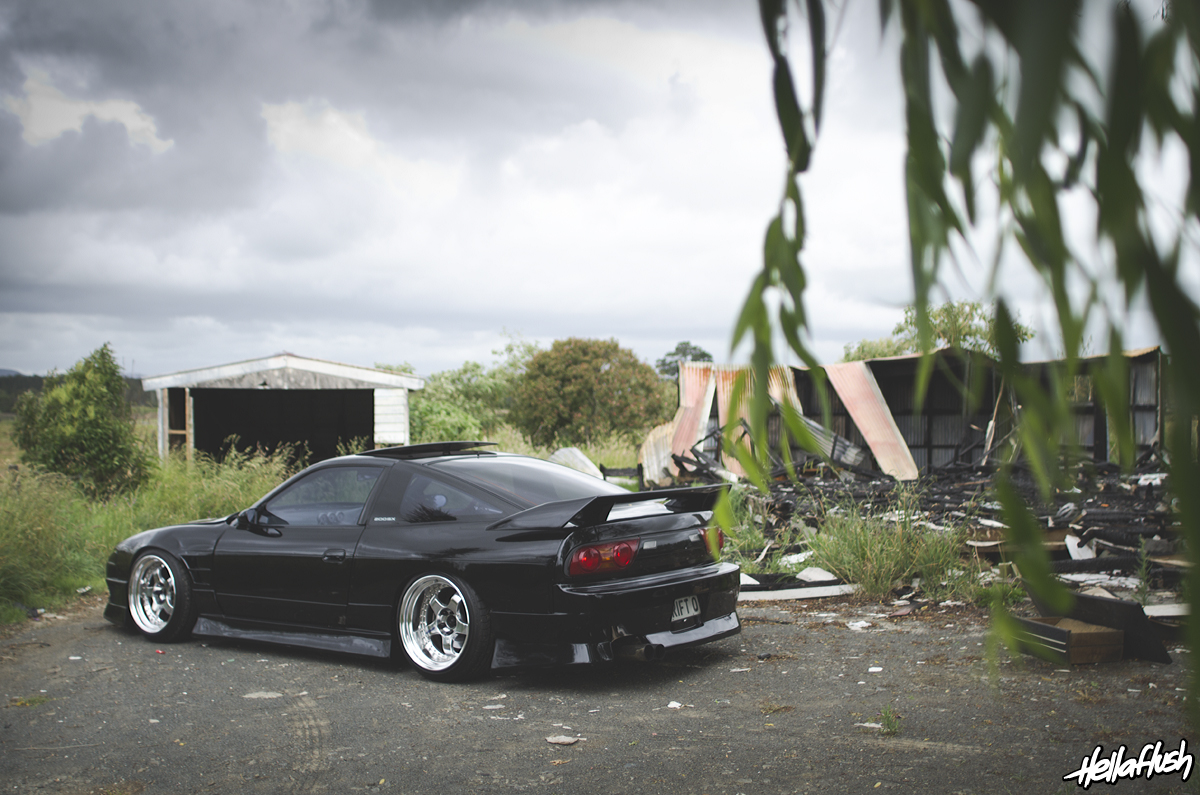 HF: What do you hate most about cars?

David: My main hatred is when the car decides to break – whether its aero, electrics, or mechanically. I guess I’m a little OCD, I like my cars to look and run perfectly. I am also frustrated with the negative image portrayed by the media about modified cars and driving them on the street. I am merely a car enthusiast, however every time I drive the car some people give you evil looks, not to mention what the Police think of it. 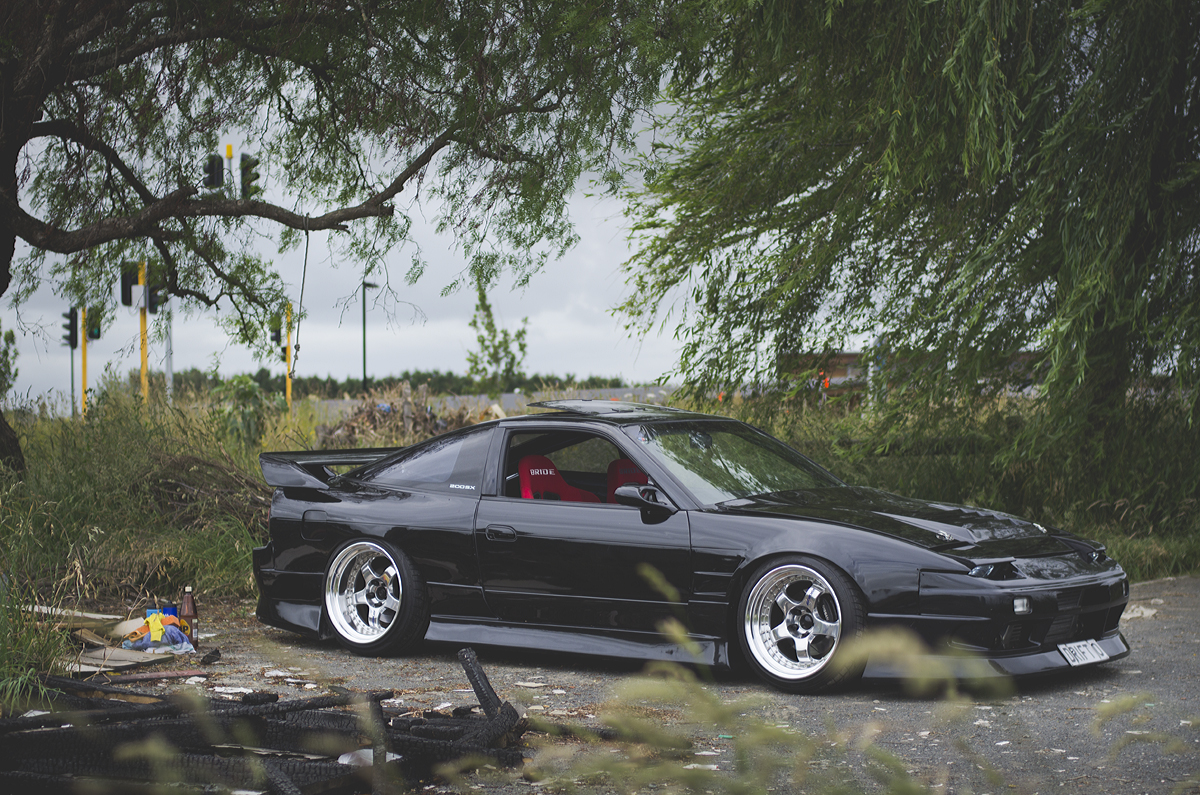 HF: We absolutely love this car and thank you for your time David. Are there any people that have contributed along the way that you’d like to thank?

David: No worries, thank you so much for your time on the feature. There are so many people who have helped me out with my car over the last 8 years! Biggest thanks have to go to my Mum and Dad for their patience and understanding of this lifestyle choice of mine. Of course many thanks to my brother Mark and mates Tony and Henry for helping out with repairs and modifications. Soichi Tate @ ST-HiTec – you are a tuning legend! Massive praise to the entire s-chassis.co.nz community for technical and styling advice (especially Olly and Roo), not to mention the amazing shit-talking and banter. 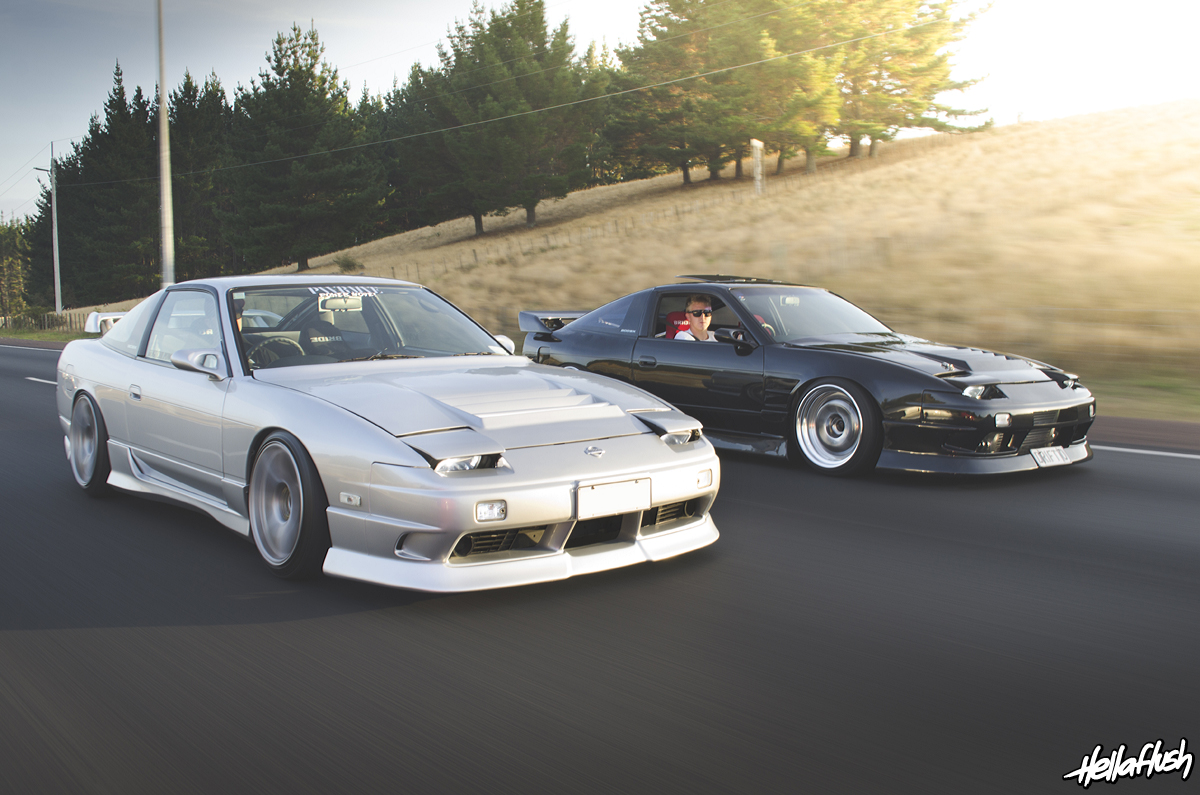