Each year I tell myself that I will make it out to SXSW and each year I fail to attend due to other commitments mainly to prep for the start of the motorsports season. This year unfortunately, I will again miss out on a trip to Austin and am even more upset after hearing news of KORG’s SXSW Showcase. 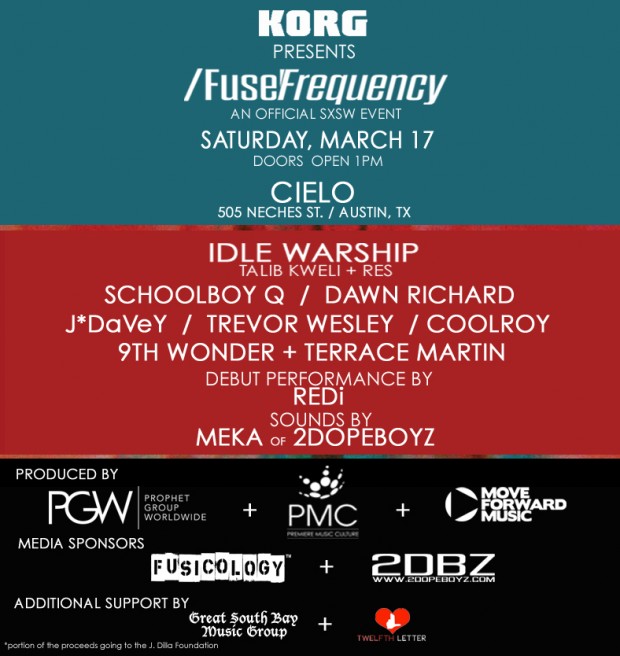 Korg has put out great musical products for over 50 years and this year they will be celebrating in Austin with their /Fuse Frequency Showcase at the venue, “Cielo.” The event is open to the public and features an amazing collection live performances by artists including: Idle Warship (Talib Kweli + Res), Dawn Richard, Schoolboy Q, J*DaVeY, Trevor Wesley, Cool Roy and 9th Wonder with Terrace Martin. There will be a special debut performance by REDi.

I guess there’s always next year…

Los Angeles, CA, March 8, 2012 – If you’re heading down to Austin next week for the highly anticipated, multimedia SXSW festival, you will want to free up your afternoon on March 17th. Korg today announced that they will be holding their /Fuse Frequency showcase at Cielo, located at 505 Neches St. in Austin.

“Korg is always looking for new and innovative ways to contribute to the music industry’s creative community,” said Evan O’Brien, Korg Entertainment Relations Manager. “With /Fuse Frequency we are able to provide a multifaceted music experience with influential and buzz worthy talent that we not only support but recognize as the top talent of tomorrow.”

This official SXSW event is open to the public and will begin at 1pm. It will feature live performances by Idle Warship (Talib Kweli + Res), Dawn Richard, Schoolboy Q, J*DaVeY, Trevor Wesley, Cool Roy and 9th Wonder with Terrace Martin. There will be a special debut performance by REDi. Sounds provided by Meka (2DopeBoyz).

Every year thousands of bands, artists and other music industry elite and notables gather to get a glimpse of the latest trends in music. /FuseFrequency, will showcase every element of the live performance from the lighting to the instruments to the mic. /FuseFrequency provides an atmosphere that transcends genres via world-class musicianship in synergy with world-class DJs.

In 2011 SXSW had over 100,000 attendees, 49,126 total registrants, 16,353 for the music aspect in particular, 6,990 media members and over 92 stages. The future of media, artists and interactivity is defined at SXSW. Take a stand at this unique exhibition to connect with leaders in the music industry.

About Korg
Korg, a worldwide leader in musical product design and manufacturing, has been in business for nearly 50 years.

Over the years, Korg and its products have received numerous awards and honors from members of the music industry trade and consumer press in countries around the world. In 2012, Korg celebrates the 10th anniversary of its popular microKORG analog modeling synth, which has been used by countless artists around the globe.