The fourth member of the Scion family will finally be released stateside in the form of the Scion iQ beginning in October. The iQ has been available in Japan for a few years now and finally the sub-compact micro car will make it’s debut in the US. 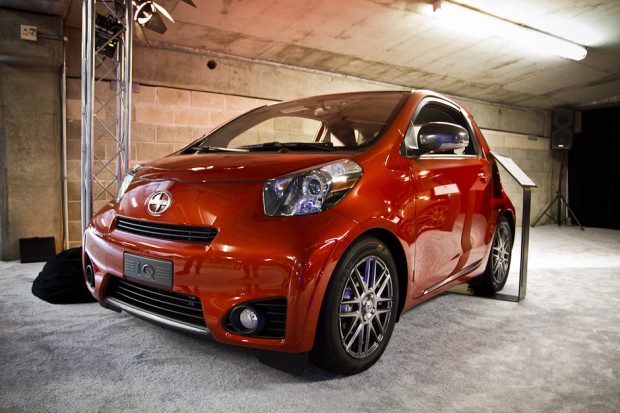 I was given the chance to check out the tiny vehicle and see the plans around its launch. As a first generation Scion xB owner (that I still daily drive) and 2-time Tuner Challenge competitor I have been fortunate to really get involved with the brand. I was excited to check out the iQ for a number of reasons one being that it just looks cool and another as I could see myself in one as a daily driver through the city. With 37 MPG avg for city and highway on regular gas and as-is (no special tires used during testing) and starting less than $16,000 it really is a great deal. 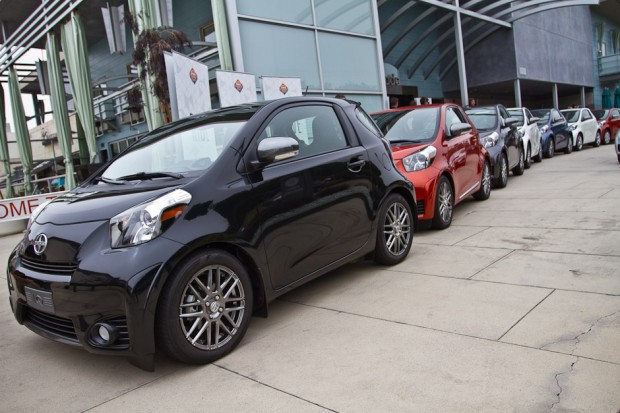 You can read about the rest of the tech specs such as 11 airbags and low-profile fuel tank centrally located under the driver’s seat and all of the extra goodies from the experts. I want to share my experience from the reveal event I was able to attend.

Scion has always been a leader in connecting the automotive world with various sub-cultures. From the first launch of the xB years ago and working with respected artists, musicians, and more, Scion has always been about the lifestyle. This is what first drew me to the brand and what still interests me today. A major focus of the iQ is DESIGN. Form meets Function with this build to keep it not only looking good, but safely perform. The car is barely over ten feet in length and yet somehow fits 4 average size people. Steps were taken to be able to do this such as no glove box, but rather a shelf underneath the passenger seat. To support the design of the vehicle Scion will have 3 shows dedicated to design with the first one titled, A Product of Design, curated by Gluekit at the Scion Installation Gallery in Culver City, CA from Sept. 8 to Oct. 8. 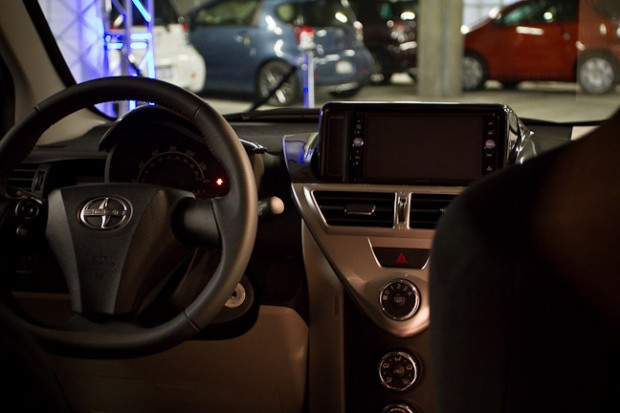 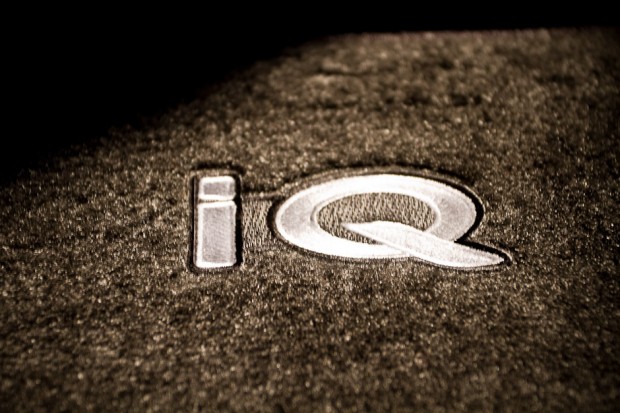 This was a unique event as a collective of editors, creatives, designers, and more congregated at the Shade Hotel (super nice boutique hotel – I suggest you stay here at least once in your life) to see the iQ for themselves. It was interesting to hear the thoughts and opinions from non-automotive people as they tend to be more about the design & driving experience rather than about the specs of the car. I’m also excited to see the Art Cars created by artists such as David Choe, Mishka, and Dust La Rock. 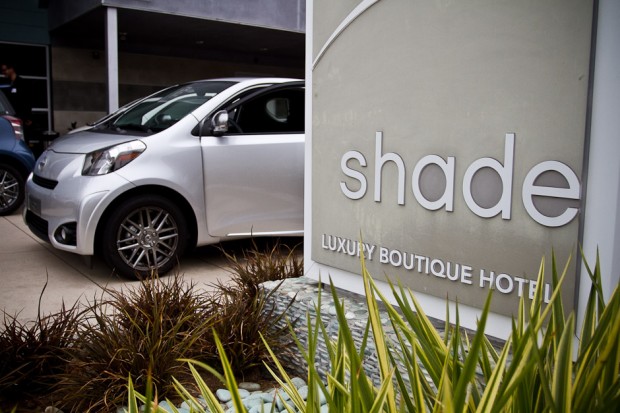 The ad campaign to launch the brand was very interesting to see and contains everything from the traditional print to web advertising including web-only viral videos that were pretty funny. They will also be launching an iQ interactive brochure that was great to check out and features the work of a few artists and their inspirations from the vehicle and the design. I was also able to check out their new 3D film that included work from Sage Vaughn, Franki Chan, and other artists. Keeping in line with supporting of the culture, Scion will be opening the Scion iQ Project Museum with exhibitions on East LA Chicano Punk in the 70’s – 80’s, Detroit’s Strata Records, producer Prince Paul and rapper Big Daddy Kane. 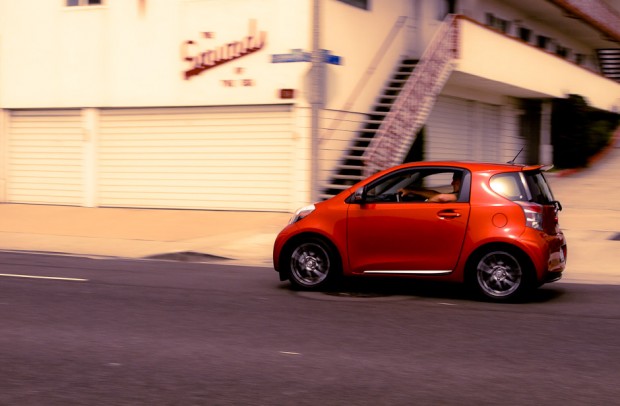 Now onto the driving experience. I was able to take the car around Manhattan Beach, my old stomping grounds – where the office was located near El Porto, and drive around the area. It’s not fast, but it’s not meant to break any speed records. It is nimble and quick enough to get around. For such a small car it does feel solid and safe even when driving at high speeds on the freeway (I won’t mention the exact speed, but it was fast enough to get in trouble). The looks we got while driving were classic as well. But the ultimate test was the ability to park just about anywhere. 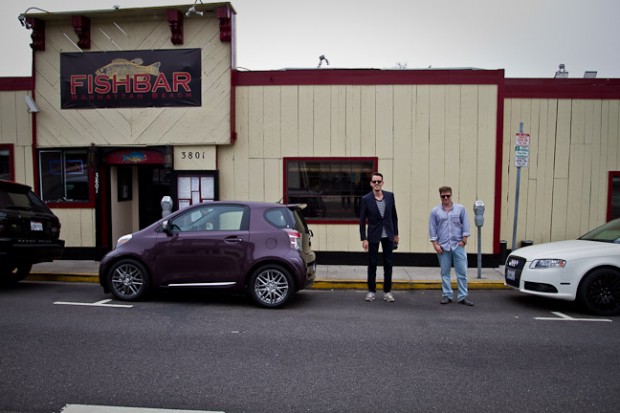 Would I buy one myself? Possibly. It really would be a great commuter car for me to get from Long Beach to LA daily as the ultimate urban mobility vehicle. Of course I would have to add a few touches here and there to customize it. Possibly add a surf rack or cargo box for extra room. Lower it just slightly. 18″ light wheels with proper offset of course and a set of Toyo’s and I’m good. I would also upgrade to get the navigation unit and then call it a day. 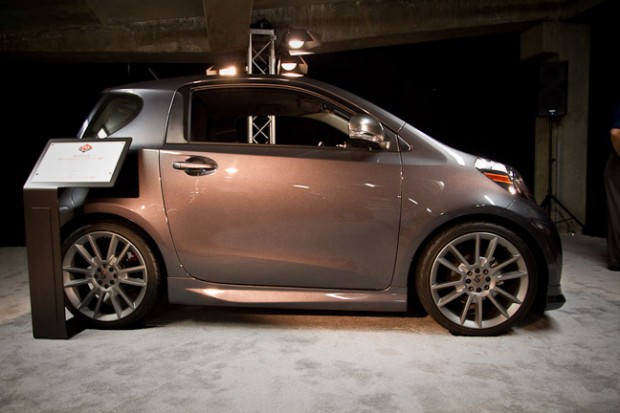