Every year, one of my co-workers goes to Vegas to run a national scrabble championship. I figure he must be pretty good. Today, I had a chance to chat with him. I asked him if scrabble was luck. He said it isn’t, and if he played 100 games, he would win 99 of them. That’s a damn good ratio! But he did say, I you’re playing someone who’s at your level. It’s more luck than if you played someone who’s a lot better. He mentioned to know all your two letter words for playing parallel. Another tip was, the tiles you don’t have are more important than the tiles you do have. Now I felt like I was talking to a martial arts master! There are similarities though. Last tip was to keep your tiles balanced or you’ll end up with all consonants or vowels. It’s better to get rid of tiles and be in a better position, than to get more points… Sometimes. 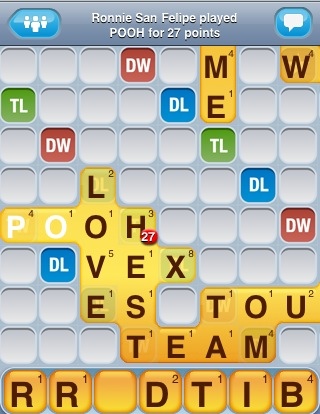