Whats stands 90 feet tall, has a 45 foot vertical drop, a 30 foot loop, and will make riders travel 50 miles per hour. You probably wouldn’t have guessed a waterslide, but if you did…more power to you! Opening in 2016.

The infamous Action Park in Vernon Valley NJ may be one of the most fun places on earth. However, it has also been dubbed by locals as “Traction Park” one of the most dangerous water parks in the country. From wave pools, to cliff diving, to air slides, to roaring rapid raft rides, alpine slides, go karts, bumper boats, water slides that were far beyond imagination, and so much more, it was amazing. This place has recently re-opened after years of laying dormant, closing down in 1996. In the 80’s & 90’s this place was rocking, more fun then you could imagine but there rides and attractions have always loomed somewhere between extreme and treacherous. They pushed the envelope when it came to safety, and have always offered extreme fun!

What you probably don’t realize is that this isn’t the first time this type of water slide has been introduced to the public. A very long time ago, they had a slide called Cannonball Loop it was one of the first attractions you saw upon entering the facility. I can remember walking through the front gate looking up at this slide and thinking to myself something just doesn’t seem right. I’m not even sure if I even remember it being open at any given time. After doing a little research I uncovered some info that stated the attraction was only open for about a month before the New Jersey Carnival Amusement Ride Safety Advisory Board called it a wrap. Well, seems my suspicions were correct, because it didn’t last long, between people getting stuck, constant injuries, and lawsuits, they shut it down not so long after it opened. At the 8:20 mark in the following video you can see exactly what I mean about the original Cannonball slide, something about the physics just didn’t feel right. Rumor has it that this is the only video of this slide in actual working operation. 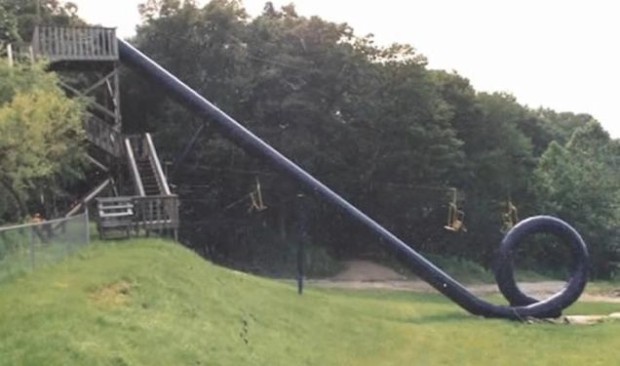