Kyss Me
Criss crossing the country AZ to FL to SD...
Thanks Houston Astros Tickets for the support
GARAGE LIFE / Posted by Fatlace Crew / 09/06/2011

We can all agree that modifying cars is a slippery slope.  It’s hard to just change one thing without a whirlwind of “necessary” additional upgrades, typically needing very little justification.  Jay’s former vehicle of choice was a Scion TC, which he pretty much modified to it’s limits.  This is where he hit a wall.  The platform he chose simply wasn’t capable of the end result he had in mind, there were just too many limitations.  Not many appealing wheel options to him and none that were as aggressive as he had hoped they would be.  Modifying the tune on the stock ECU also proved to be a pain in the ass.  At this point Jay decided he wanted something else.

Having recently started hanging around with the rabble-rousing crew @ Project X here in Chicago, he was exposed to the Z platform.  Seeing what Larry and Eli were doing with their cars sparked his interest.  So he began his search by test driving a 370z.  He was instantly enamored.  In his search for one he came across a deal he could not pass on a Nismo 370z.  Why buy a base 370z when the Nismo already has most of the desirable modifications done to it and is spec’d from the factory?  The deal was done, and Jay found himself piloting a Pearl White Nismo 370z.   So, being a semi-sane individual, Jay was content with the state of his “stock” 370, right?  Wrong.  Jay put about 400 miles on the odometer before he dropped the car off at Project X, along with a plethora of parts and some big plans. 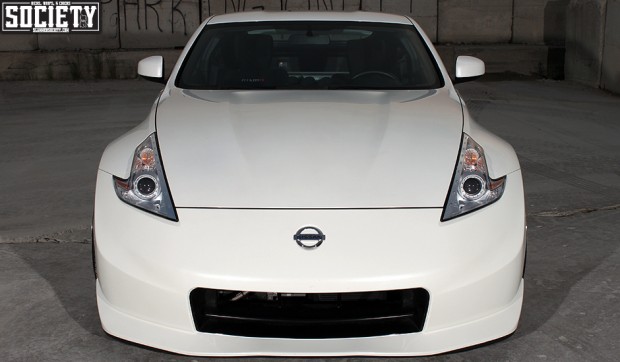 The stock Nismo aero has Jay content…for the time being.  Definitely not a bad thing.  I honestly think it’s one of the best looking cars out of the box on the market today. 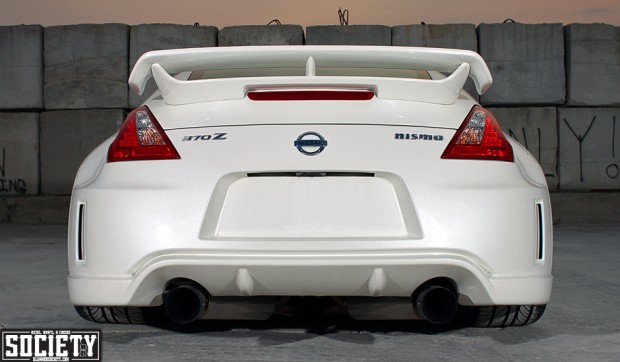 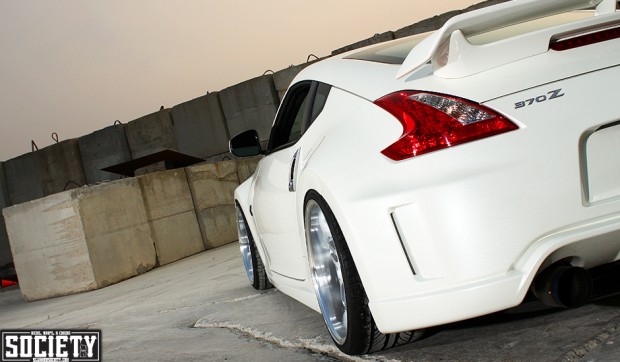 Jay’s main concern was stance.  He wanted the car to sit proper.  After all the limitations with his TC, he wanted to nail this aspect down.  This is where Project X came in with their expert wheel fitment knowledge.  With their help Jay was able to find the perfect sized wheels and tires, without needing a spacer.  And holy hell do they fit well. 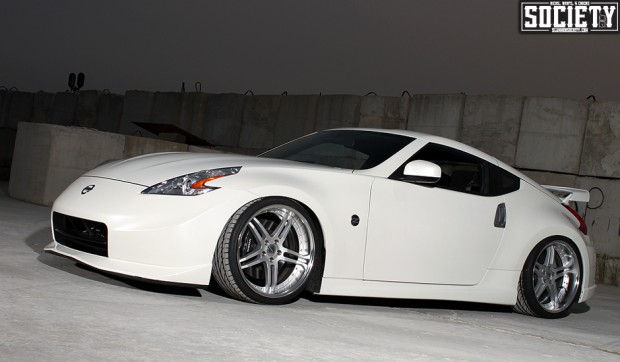 He settled on a set of Work Gnosis GS-2 in matted silver finish which he ordered from Touge Factory. 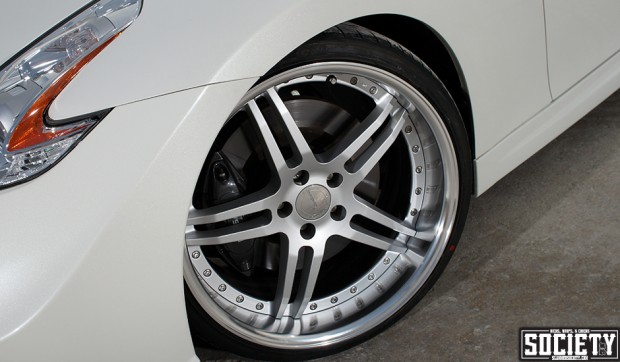 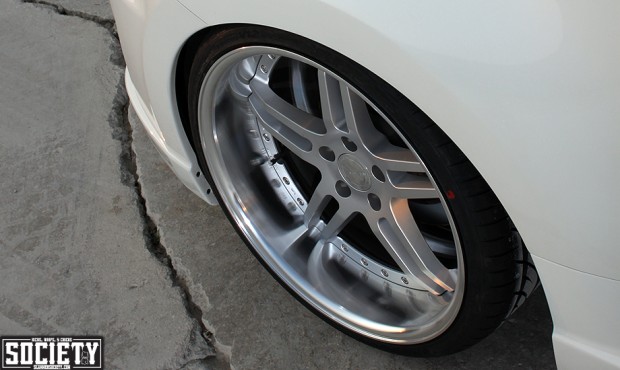 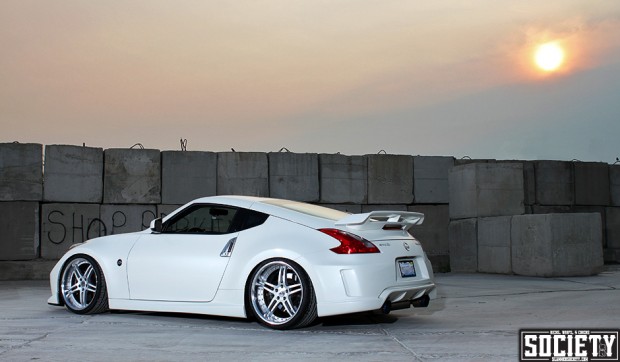 Drop is compliments of Stance GR+ coils with SPC camber kit, with the height being left up to Eli @ Project X.  Running -3* camber all around.  The stock Nismo sways were replaced with Stillen, front and rear. 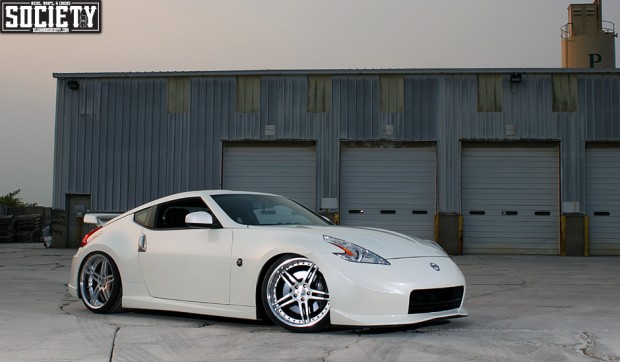 The 370z is a car that took me some time to get used to.  Being a Z enthusiast, my attraction has always been to the S chassis Datsuns, and the 300zx Z32 twin turbo (which I can see mine from out my window right now).  But the Nismo is just one of those cars done right from the factory.  The aero is aggressive enough and flows perfectly with some of the admittedly odd lines and contours of the 370z.  It all just seems to balance out, especially with the right wheel setup. 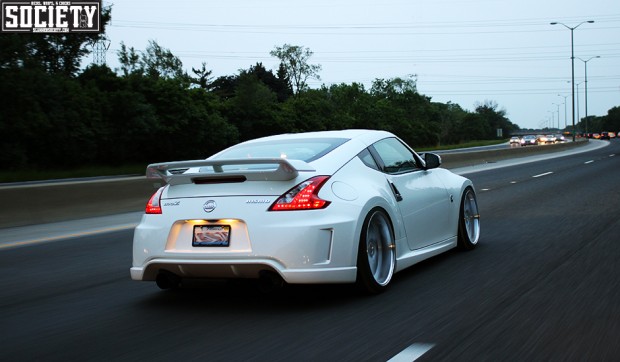 I had seen the car for the past 4 months or so sitting in Project X, slowly transforming into what it is today.  It’s a sight for sore eyes to see this car rolling on the highway finally.  And needless to say just about every car we passed was rubbernecking.  And all the while I’m sure Jay had a sh*t-eating grin on his face. 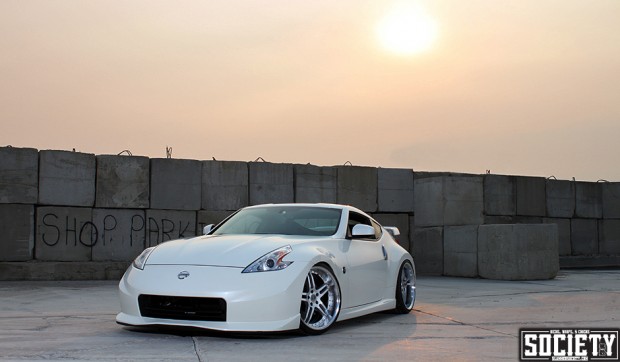 I think it’s safe to say that Jay has found a way around his previous limiting factors with this platform.  During conversation while I was tearing down my gear, Jay briefly mentioned talk of forced induction in the future.  Something to the tune of GTM twin turbos.  And how convenient that Project X just so happens to be a certified GTM dealer and installer.  Funny how that works out eh?  So even bigger plans in store for this car.  All this made possible by Jay’s sponsors – Project X and Touge Factory.