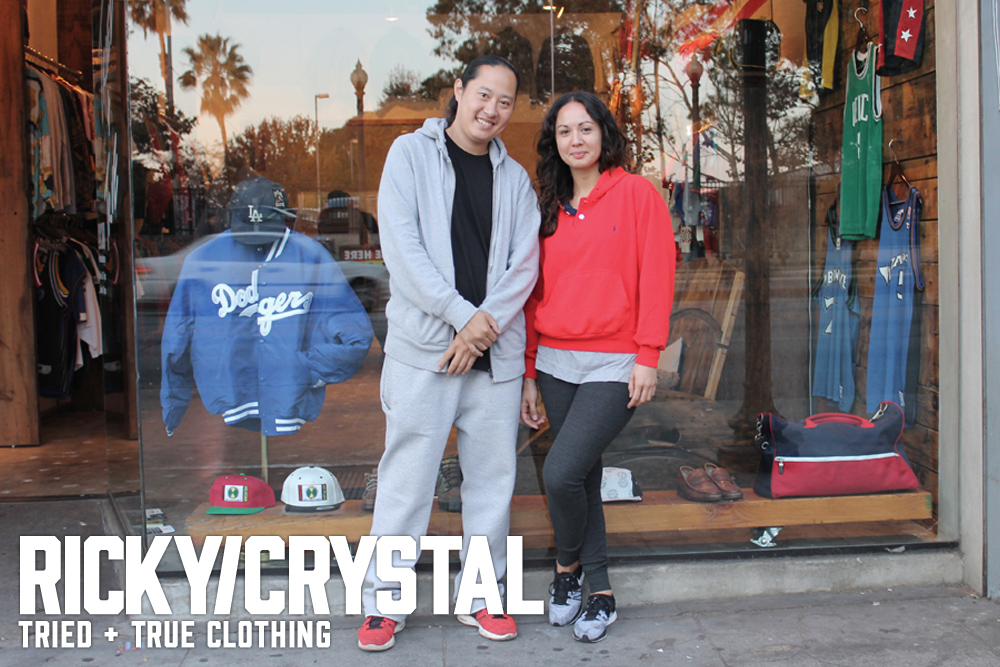 Right place, right time. It happens – when the universe aligns to work in your favor, when things fall in your lap as if it were meant to be. Tried + True Co., the almost 2 year old vintage shop on THE Fairfax block of Los Angeles, say that about themselves. They happened at the right place, right time.

One half of Tried + True Co., Ricky, was working at Flight Club New York when he was asked to open the LA store. He willingly moved his life 3000 miles away for the opportunity. That life he moved also included his clothes. Ricky has been collecting clothes from the 80s and 90s as long as he can remember. Primarily influenced by Polo Ralph Lauren, his unlikely passion ensued. He dug, he traded, he got chased for the shirt on his back, and he even shoplifted for this. By the time he was ready to make the move, he had a collection older than some of you reading this and larger than the average bedroom. When asked how Tried + True Co. started, he simply said, “hoarding”.

Finally in LA, and Flight Club already opened, he had staffed a sales associate named Crystal. She was West Covina born and bred, Bay Area educated, and hungry for new opportunities after college and a subsequent office job. She ended up at the sneaker consignment store where she developed a friendship with Ricky. They bonded over business ideas, clothes, and…storage space.

A few doors down Fairfax was an existing vintage store called Trayf. It boasted a collection of rare women’s pieces, and a large space in the back waiting to be rented out. When Ricky and Crystal heard that the space was available, they thought it would be a good idea to store Ricky’s personal collection there. After all, it was so close to the workplace that he could stop in at any time. The owner of Trayf soon realized that Ricky’s presence there could actually benefit the store. So she brought up the idea of integrating his pieces onto the floor, and he agreed to start with one rack of clothing. Before he knew it, it sold out. So another rack was brought in, and that quickly sold. It didn’t take long for Trayf to be filled with Ricky’s things, and for Crystal to assume a management role.

Right place, right time. The lease on Trayf was up, and who better to take over than Ricky and Crystal. Another opportunity presented itself, and they grabbed it. The solidified business partnership, the brick and mortar, Tried + True Co. happened in 2012. Ricky and Crystal are Tastemakers.

As they approach their second year of business, they’ve found themselves digging every day, traveling all over to for more inventory, fostering one-of-a-kind connections with their customers, visiting vintage trade shows to put themselves on game, and opening up their space to events (they recently hosted Drake’s Nothing Was the Same pop up shop, and currently on display is the BGRT pop up shop). But more than anything, they’re finding themselves still grasping that their lifestyle became a business. We asked Crystal if she ever thought she’d co-own a vintage shop, directing all operations primarily in sweats and Flyknits, she humbly replied, “hell nah.”

Tried + True Co. stands amongst veterans in the industry. They use their position as the new and different kids on the block to source inspiration from their neighbors and to educate a customer base who may not know about the nostalgia in each piece for sale. That was our connection with Tried & True when we first visited the store. The Niners Starter Jacket brought us back, as did the Cross Colours t-shirt and the Nautica windbreaker. As much as we are here telling Ricky and Crystal’s story, the sales floor tells stories, too. Yours. That’s why we all agreed that vintage won’t ever go out of style. Perfect, because Tried & True has a lot of plans in the coming year that you should look forward to.