The last month has been an absolute whirlwind, but in the most extraordinary ways possible. I figured I’d at least try to post a few snippets of the going-ons in my life, if for no one else but to see but my mom. (Hi Mom!) For those who don’t know, Pirelli just wrapped up its second year as the official Formula 1 tire sponsor and recently announced its partnership with Circuit of the Americas, the custom-built track in Austin that hosted the triumphant return of Formula 1 to the United States. The Pirelli North America team was on hand all weekend to oversee various activations from the Fan Fest in Downtown Austin to the dealer convention in San Antonio. 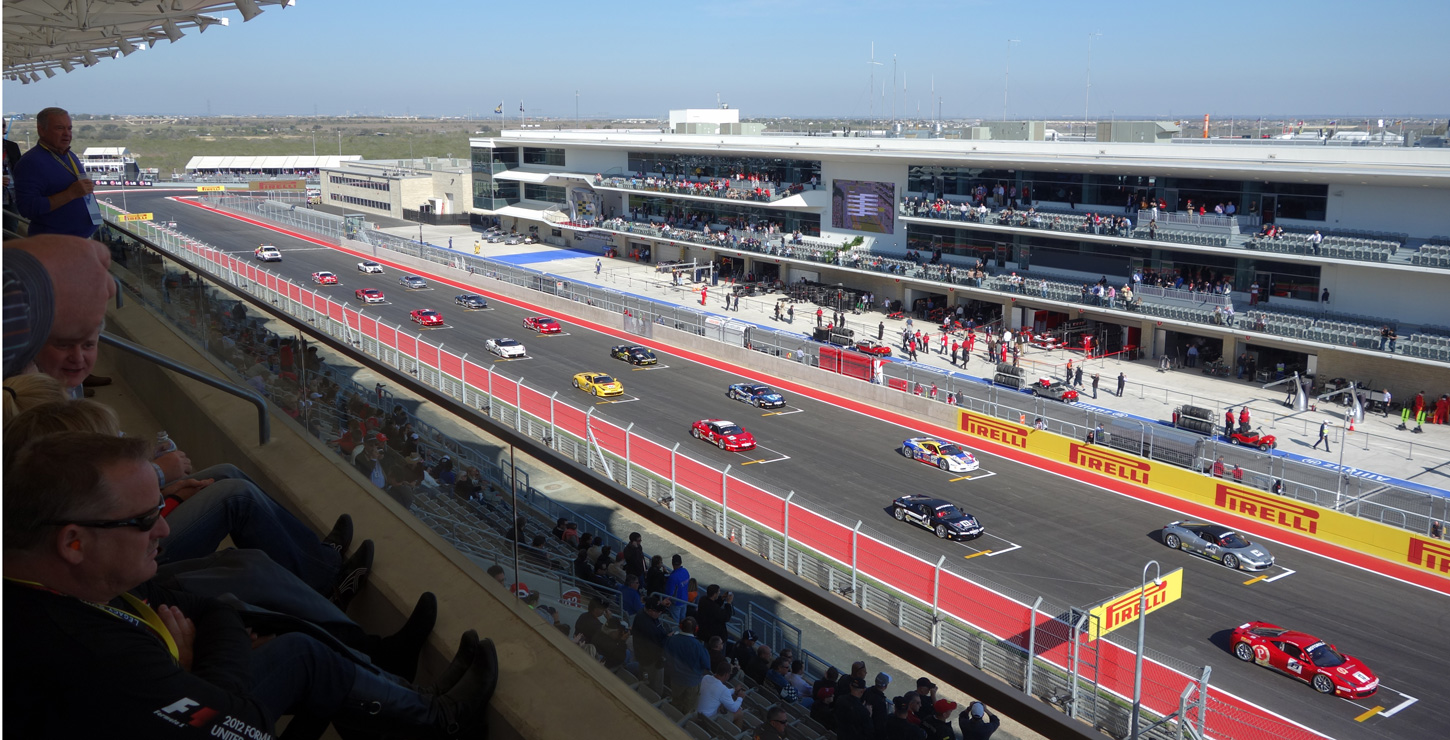 After two years of press releases, tracking, commentary and discussion with my fellow ID Agency F1 cohort Brandon, I was finally attending my first Formula 1 race. It was absolutely nothing I had imagined it to be. From the get-go, I was astounded by the production – from helicopters shuttling people in, to the coordination of our police escorts, to the personnel on site, to the number of grandstands – it was unlike any event I’d ever attended before. As the supercars took their respective spots on the starting grid, I could feel my excitement building and goosebumps beginning to form. 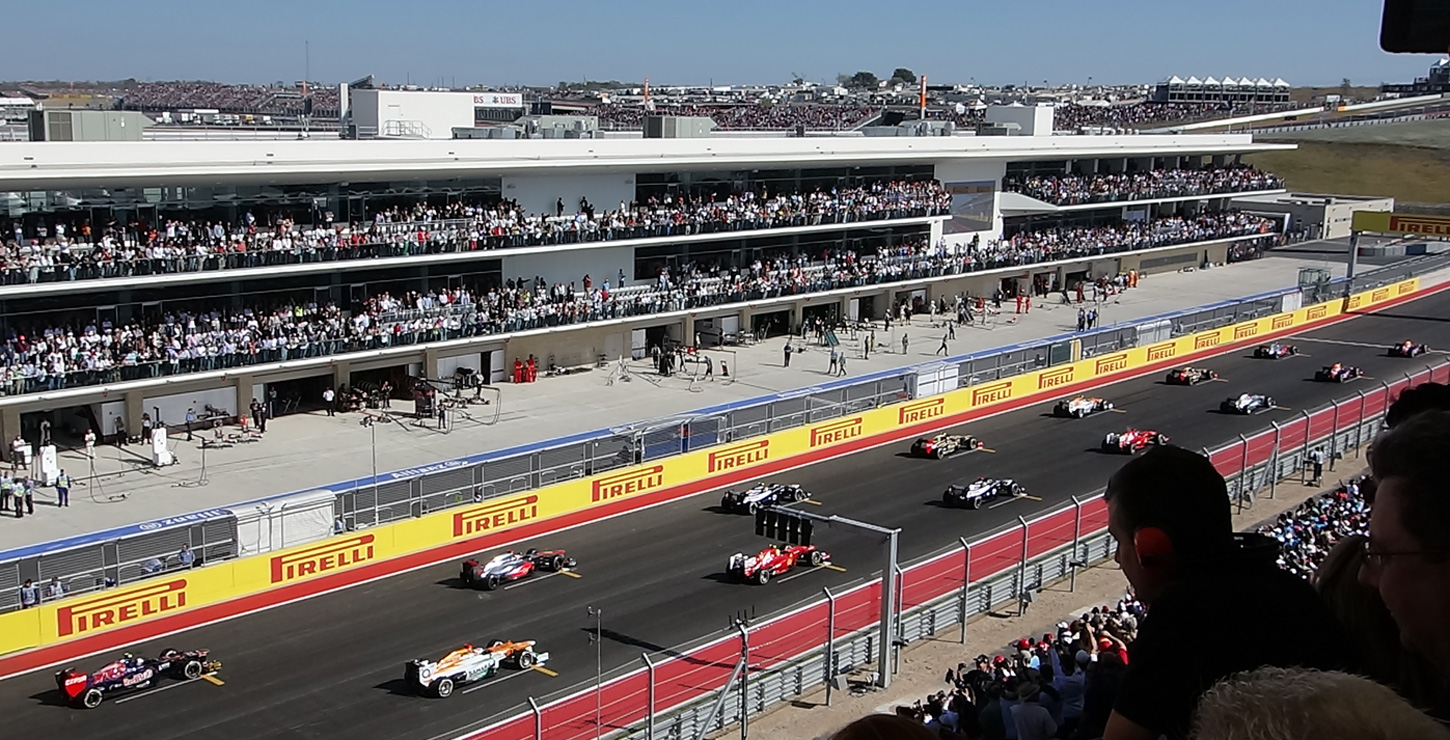 I’d been warned well in advance of the noise, and was hoping to be able to ‘suffer’ through my first Grand Prix without using ear plugs, but three laps in and I was ready to call it quits. Lucky for me, Pirelli included a pair in their gift bag; these guys think of everything! The view from our suite faced all the paddocks, a perfect vantage point to catch the infamous Formula 1 tire change. Not going to lie, I completely missed the first one, haha. It happens so fast that if you go inside for another complimentary cocktail, or blink for two seconds too long, the drivers are zooming off to Turn One again. It was incredible to see the efficiency and speed in which this gets done. I’m definitely looking forward to one day seeing it from the paddock point of view! (nudge nudge Mark.) 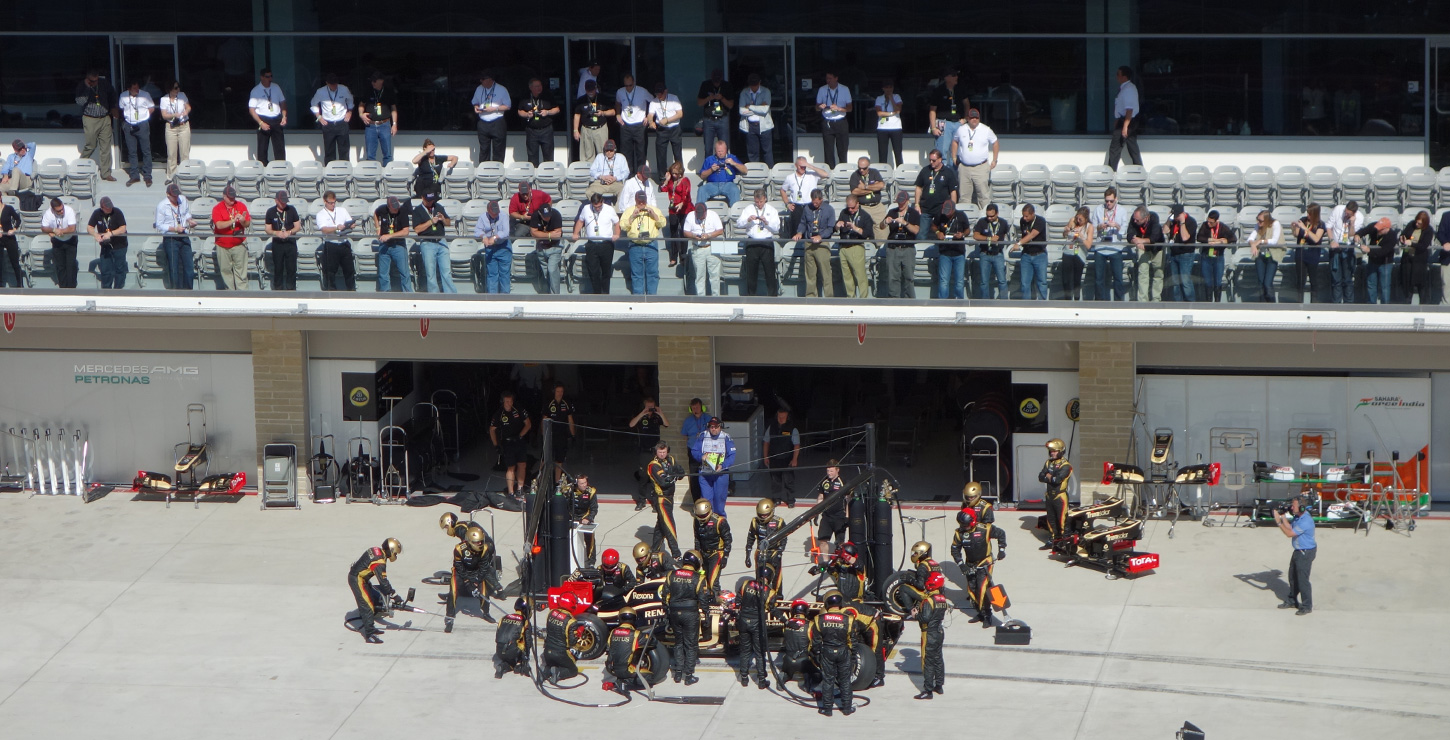 We were joined by Chip Foose, Matt LeBlanc and Claus Ettensberger. Not pictured are Ken Block, Greg Emmerson, Nick Stecher, Skiny Powers and our neighboring tycoon: George Lucas. A star studded suite, to say the least. Again, nothing I could have ever fathomed and so much more. It was a perfect way to kick off my Formula 1 experience, and now I’m hooked! We’ll see if this newfound love replaces my love for sleeping – if so, Mark and Jose are going to have another voice chiming in on their live F1 tweets during the 2013 season. 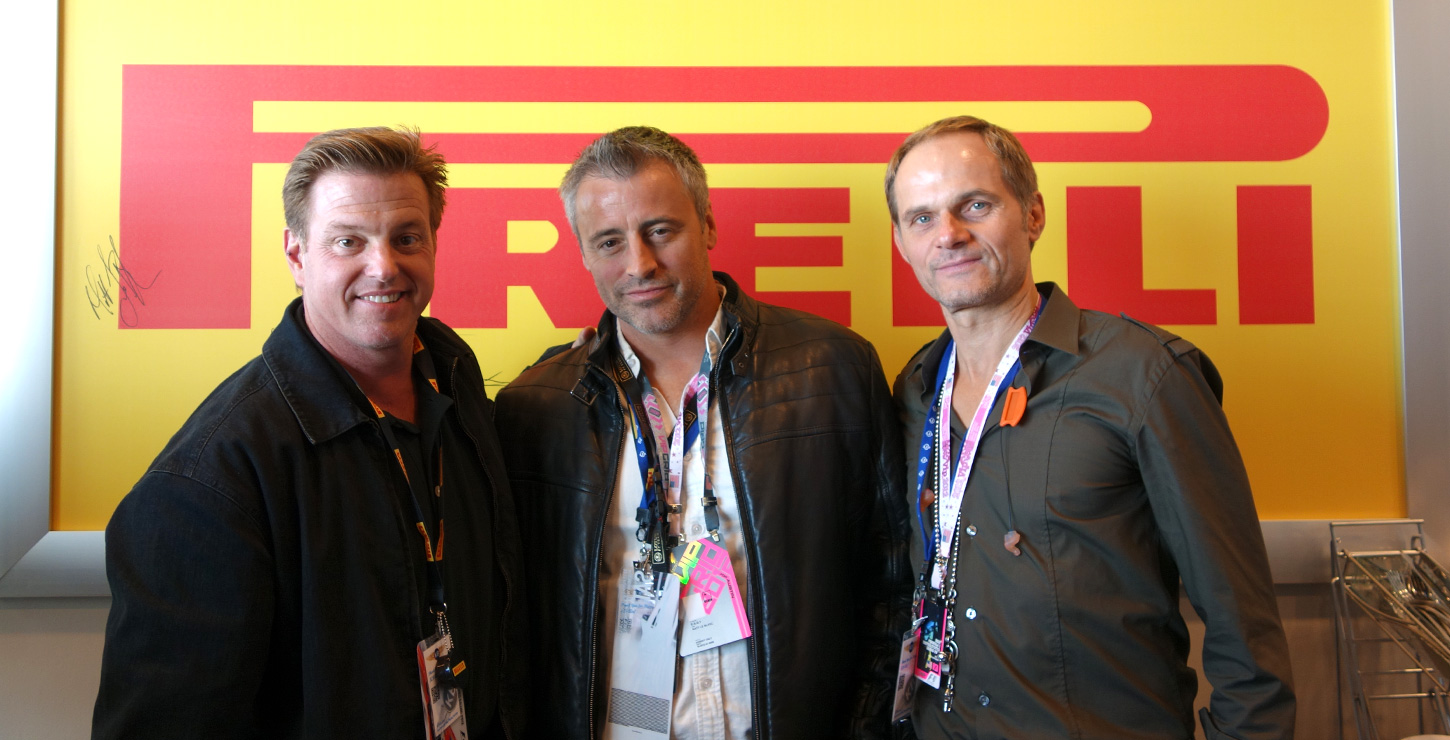 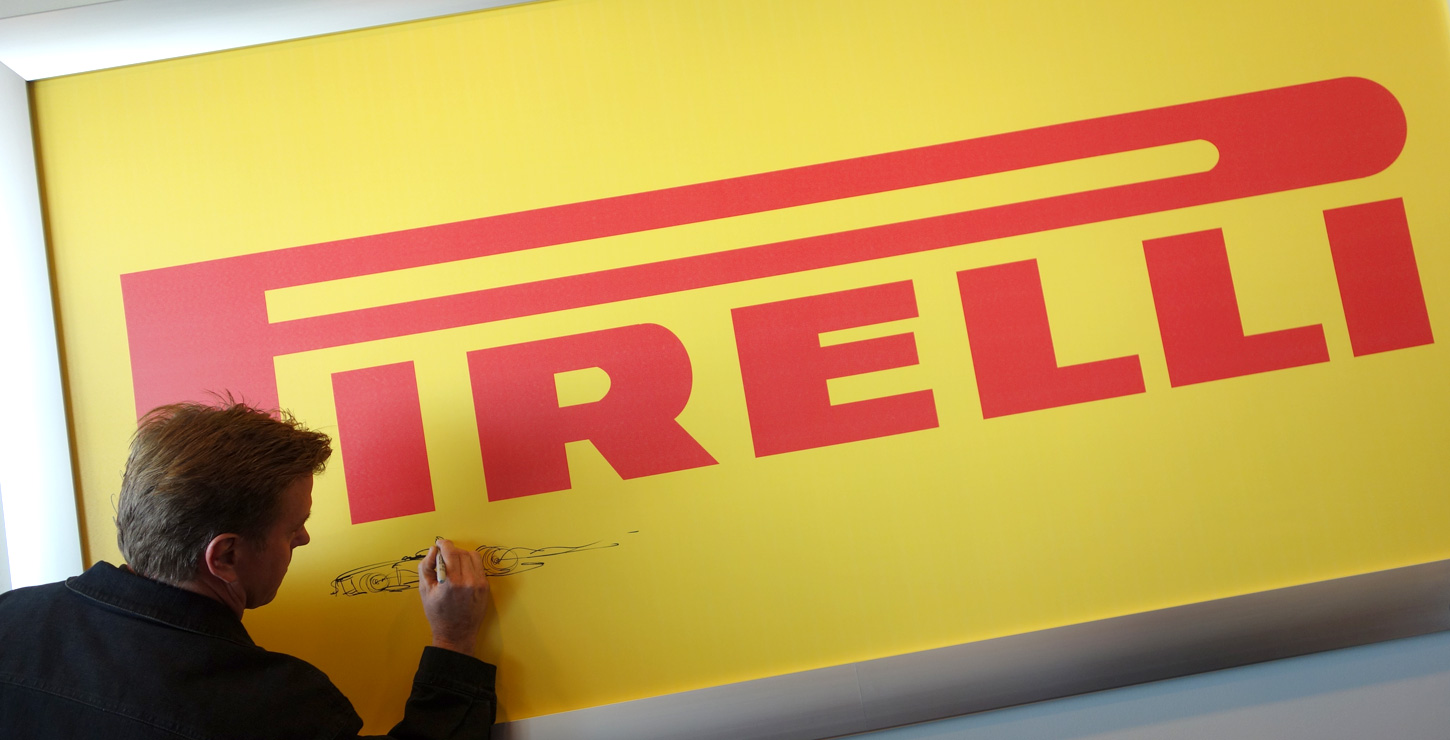 During the weekend Pirelli also announced its decision to re-sign marketing partners Chip Foose and Ken Block. If you’ve come by our booth during SEMA, you’ve seen these two gentlemen signing autographs or taking pictures with adoring fans. Not only are their respective talents unmatched, they’re both absolute pleasures to work with. It’s been a fun two years and I’m looking forward to what the future has in store! 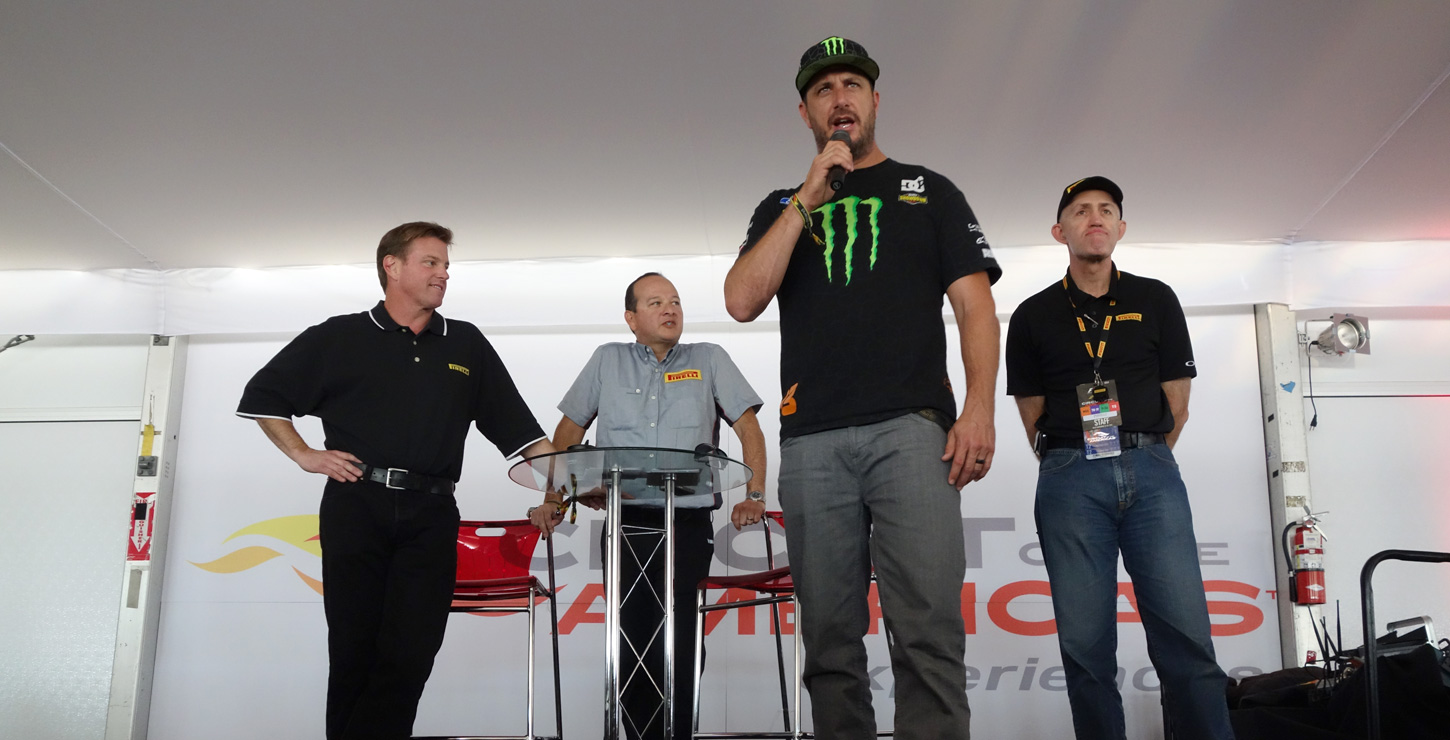