The Nike US Open of Surfing returned to Surf City for another year showcasing some of the best surfers in the world including Kelly Slater, Dane Reynolds, John John Florence and many more. Over 250,000 people packed the Huntington Beach during the final weekend of competition. 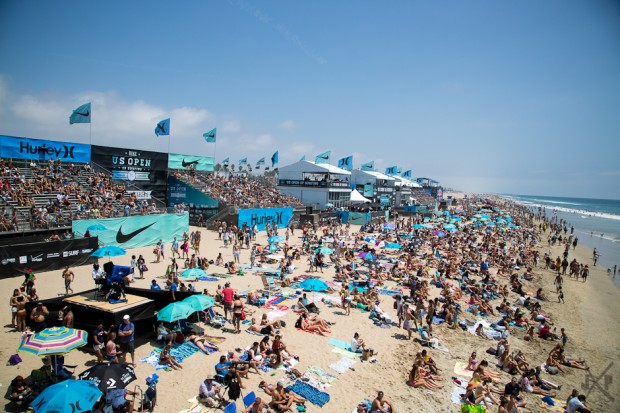 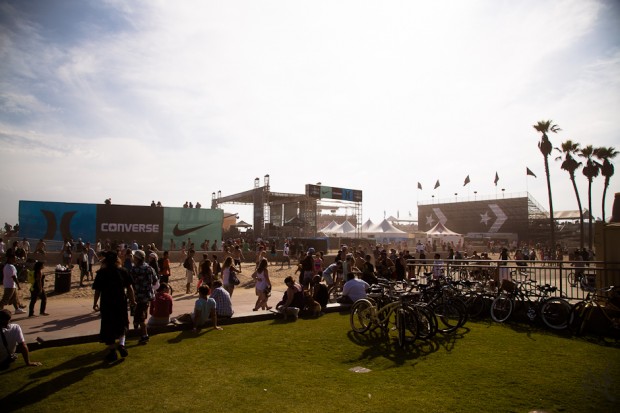 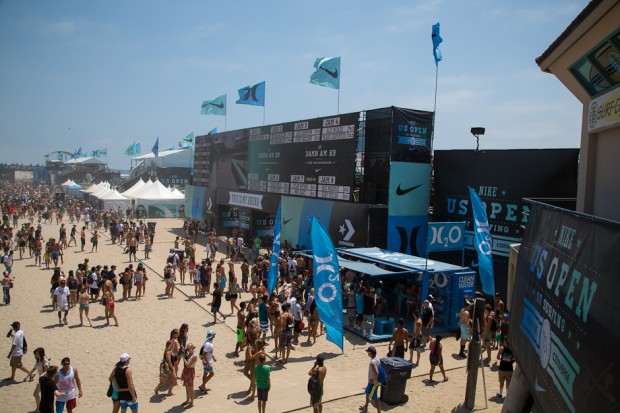 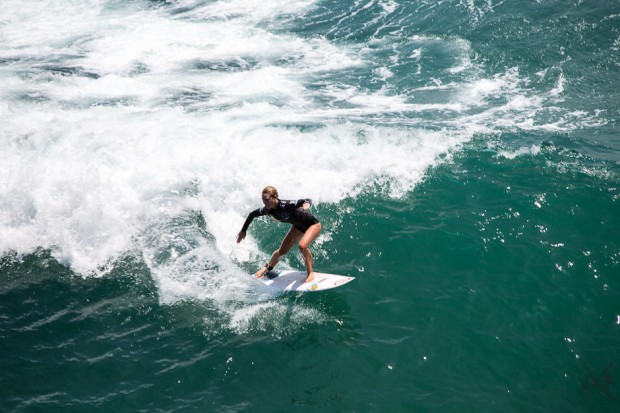 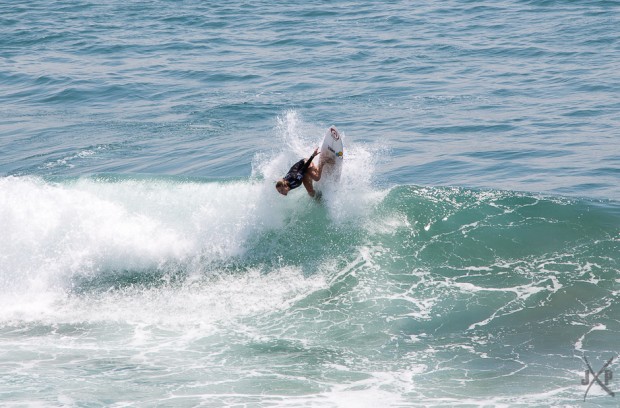 I was invited by Nike to check out all of the action and was more than happy to spend a weekend at my hometown break to see the competitions in surf and skate. I’ve been attending this event for over 15 years somewhat consistently, but never had the opportunity to see everything for about 3 days straight. Things have changed dramatically during this time and with Nike, Hurley and Converse stepping up to take over the event. The overall production was very well done (thanks to IMG) with grandstands and suites, various booths from the UFC to Scion activating to keep the crowds engaged and also two massive retail stores on the beach for Nike and Hurley. The apparel that was created for the event alone was top notch for event gear from the Hurley tank tops and tees and hats. These were seen everywhere. 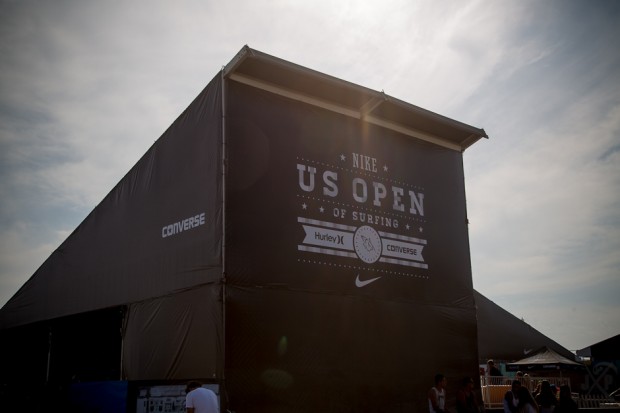 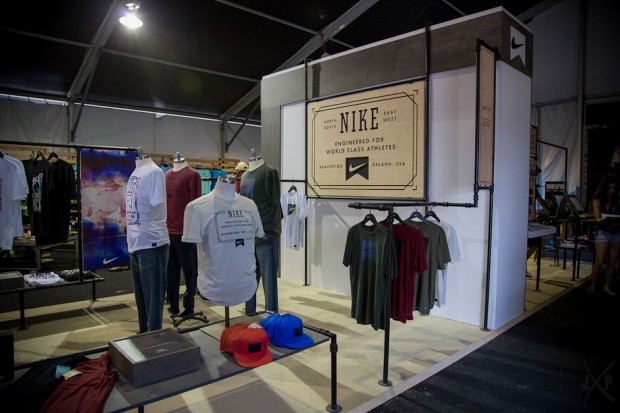 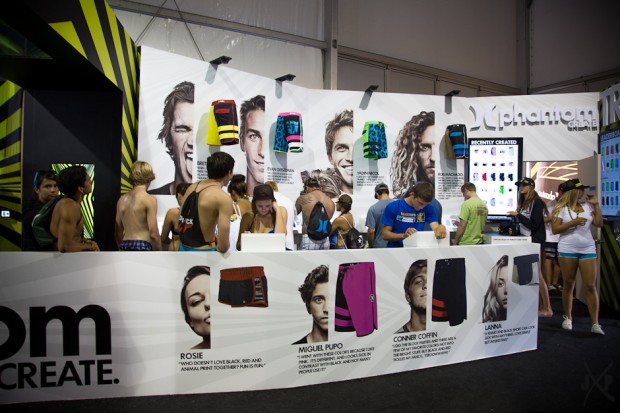 Hurley has always been one of the staples in the So. Cal surfing industry since being introduced and I was aware of their global plan to help provide clean water to those less fortunate. An amazing stat that they showcased was that 1 in 6 people in the world do not have access to clean water. This is more prevalent in countries such as Haiti, Brazil and India. In an effort to create more awareness, Hurley has partnered with Jon Rose of Waves for Water, Evan Marks and the Ecology Center and surfing icon and humanitarian Rob Machado. To learn more visit – Hurley H20 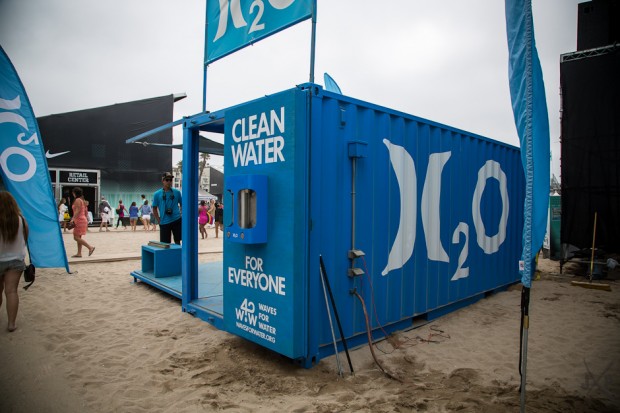 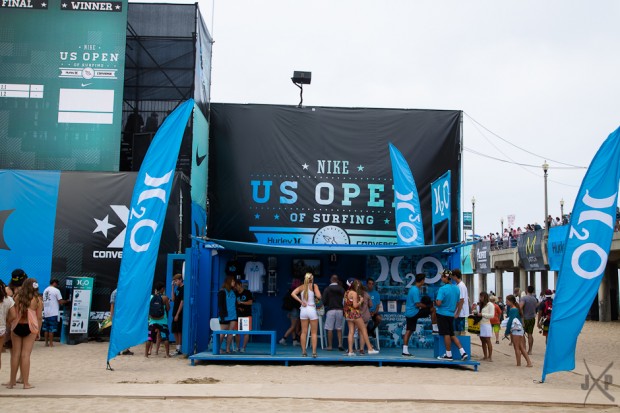 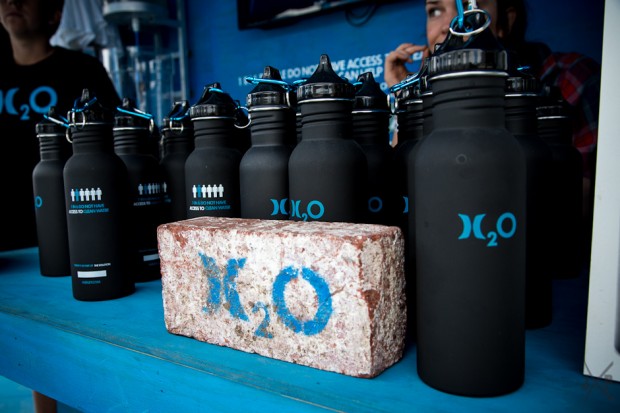 The US Open of Surfing is a great time overall. Not only to watch the contests, but also to people watch and enjoy being outdoors. Brands like Converse continuously showcase their involvement with art and creativity. A mural by Push of the Seventh Letter crew was done at my friend’s shop LDG. 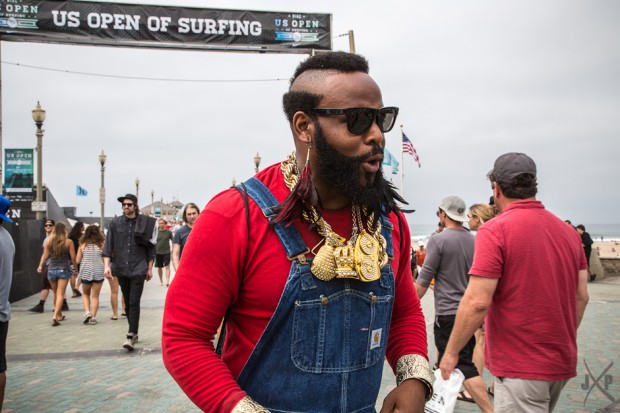 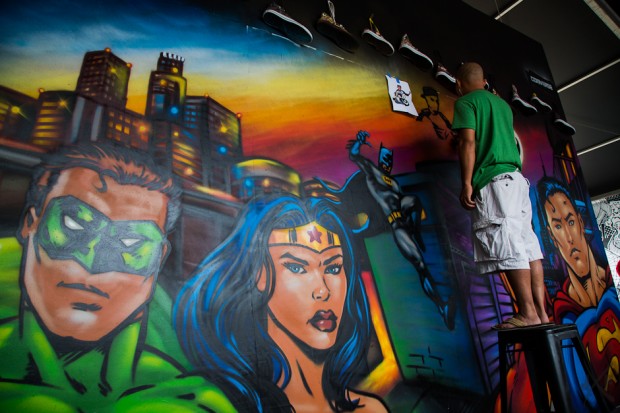 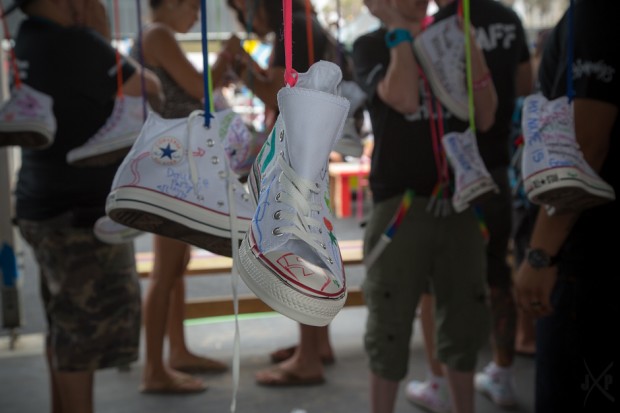 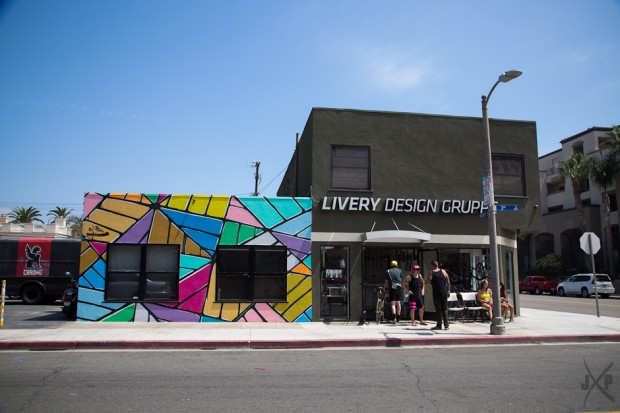 Growing up skating I couldn’t imagine having the chance to skate the Nike Damn Am Street Course or Converse Coastal Carnage Bowl. Such a great spot that unfortunately only lasts for a couple weeks. These amateur guys ripped. And I can easily see them going pro very soon. 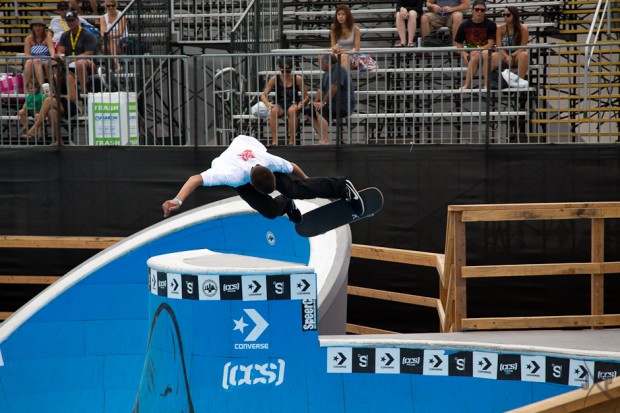 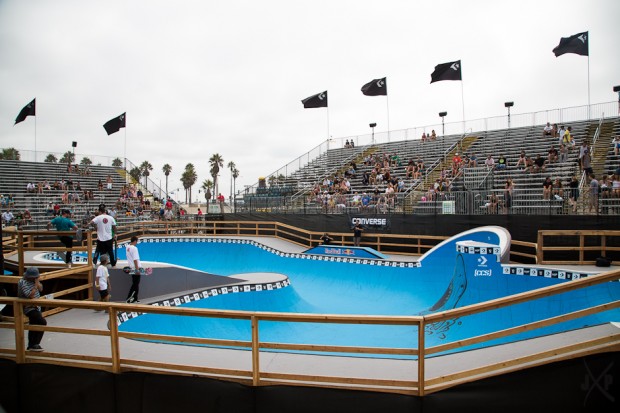 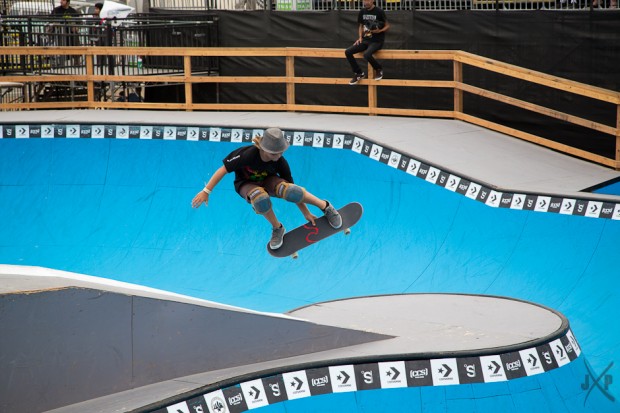 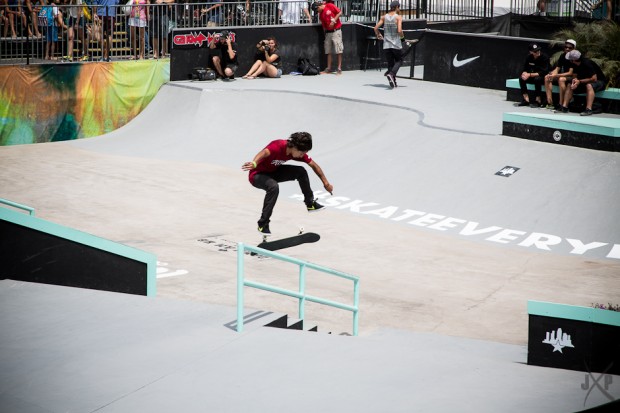 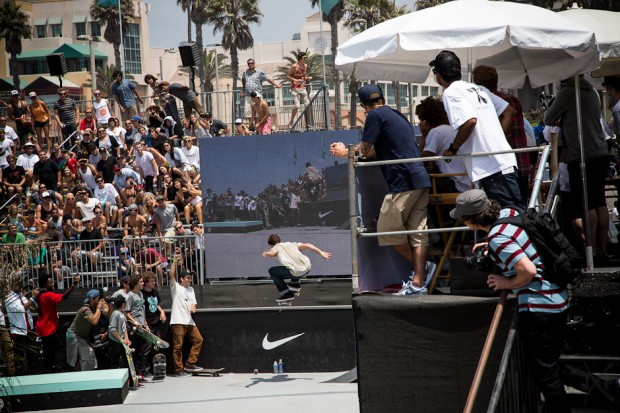 The surfing was good in the final weekend for only decent waves at best. The early morning sessions as expected received better sets and conditions for the surfers. At times the sets came rarely forcing the competitors to strategically take any wave that came their way and also hurting the chances for some of the top guys to advance including 11 time world champion Kelly Slater. The lack of waves didn’t stop these guys from killing it when the waves actually did come and many were able to hit the bottom turn and go off the lip showcasing aerial action. The finals saw Miguel Pupo from Brazil go heads up with Julian Wilson from Australia. Wilson took the victory and the $100,000 prize. 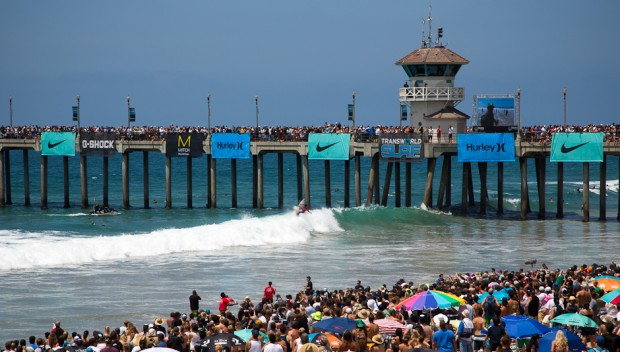 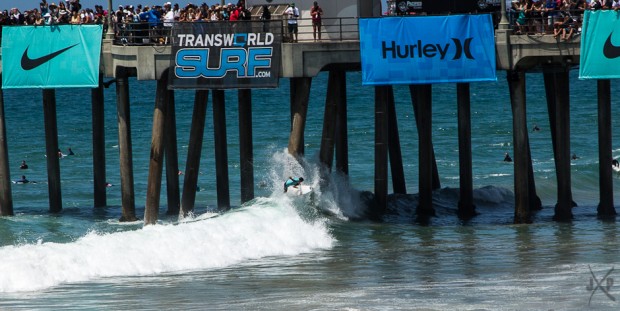 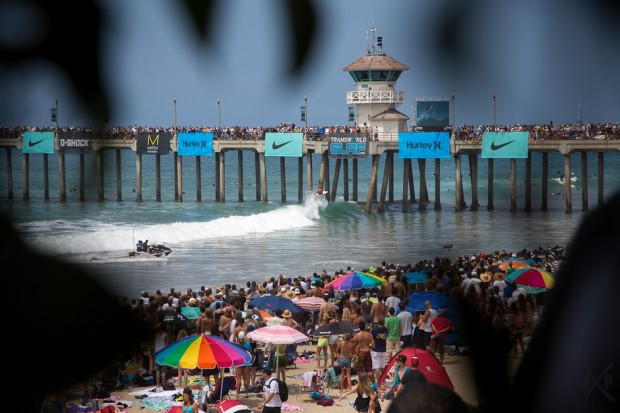 Overall, I had an amazing time and look forward to next year’s event. It inspired me to want to try shooting more surfing and possibly rent a waterproof housing and super ultra photo lens to get tighter shots. We’ll see what happens.