I first met Estria at Psycho City when he and Crayone were painting the giant BBoy and Baby Blue production back in the early 90′s. It’s dope to see that these guys are still rockin and putting up burners worldwide. Estria has been busy with his foundation, the Invitational Graffiti Battle and the Water Writes project.

On to our Fatlace Exclusive interview with the OG:
—

When and how did you start writing?

We started in ’84. My friends were breakers and we saw graffiti on things like the Jelly Bean album, and in the movies Breakin’, Beatstreet, Wild Style, Style Wars. Our first piece was with an airbrush and a can of compressed air. We climbed into a canal and tried to airbrush the word ‘fresh’ on raw concrete. People stopped to watch, no one thinking it was illegal. We got to the ‘R’ when the air ran out. It got us juiced enough to get spray paint and try it again. That was the beginning of a life-long love affair.

Where are you from?

I’m originally from Hawaii and have been in the Bay Area for half my life.

How did you get your name?

Back then everyone was taking a word for their tag name, but I wanted a name. For a month I played with letters I liked until I came up with Estria. Years later a man told me estrîa, with the accent on the ‘I’, means stretch mark in Portuguese. He said the Latin root was ‘stria’ meaning to stretch. He said it was a good name, as in stretching your mind. I now know that I live my namesake in that I am constantly pushing myself to learn and expand in so many areas of my life. Who influenced your style?

Of course all the NYC originators. Crayone TWS inspired me to believe that I could paint anything with spray paint. He and Risque TWS taught me how to outline my pieces very cleanly. Raevyn TWS taught me to explore anything and everything and to make them into letters. He taught me to have fun inventing new styles of lettering. Other than that there was no one to teach us back then. I learned a ton from Barron Storey on visual communicating, techniques, and being creative. Going to the YMCA as a teen taught me to envision a better world and how to work to make that happen.

Where do you find inspiration?

I pay attention to everything. Meditation and martial arts are great. Dreams do a lot for me. Painting with others is good for sharing ideas. Writing is very collaborative and you learn from others. Studying geniuses and masters in other fields and cultures is very good too. Having fun and being in a playful, stressfree state is good for the idea flow. Basically, I feel like a gate and the ideas flow through me, from the universe/higher being.

What are a few of your favorite pieces or productions?

The first manhole-to-manhole production ever painted in the N Judah tunnel with Neon and Crayone.

Mural with Ceyba honoring the site of a massacre in Honduras. This was the first time I experienced such overwhelming love and appreciation from a community for a mural. 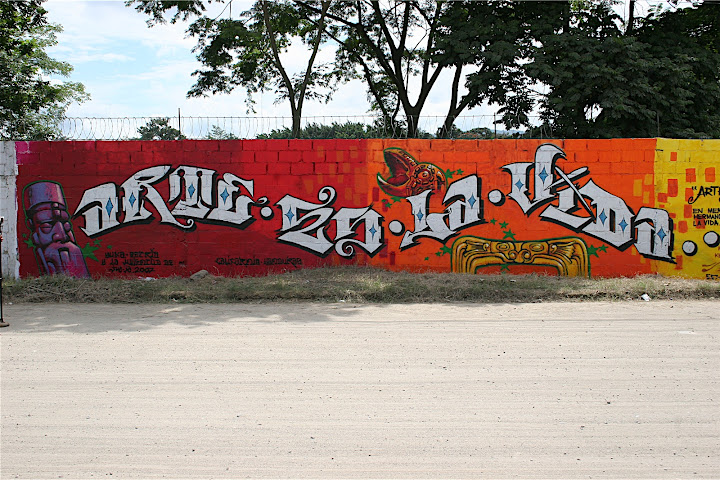 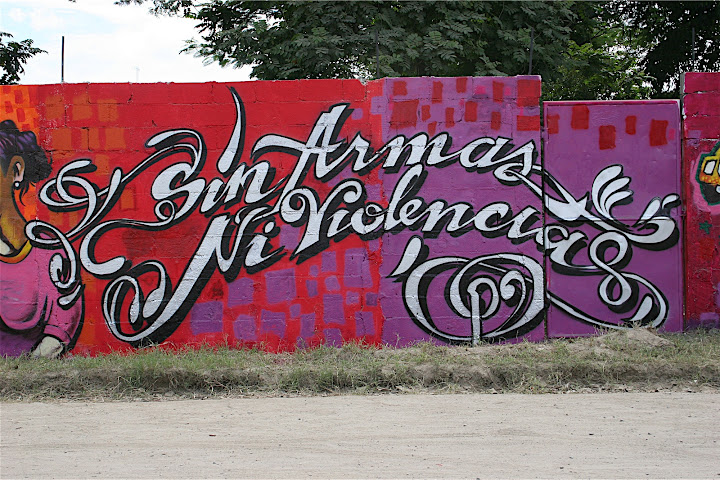 The recent mural in Hawai’i for #WaterWrites. It raised the bar for what I want in all my projects for the rest of my life.

You pioneered a skinny cap. How did this change the game?

Hex TGO of LA and Razor KTD of Berkeley invented the same tool. I just had a hand in developing it to the tool we use today. It enabled us to use the spray can as a fine point airbrush. It’s helped push mural work farther along. It’s completely useless for large lettering.

Can you explain the mission of your non-profit, Estria Foundation?

The Estria Foundation shifts the social consciousness on critical human and environmental issues through education, art projects and community events around the globe. The Estria Foundation (TEF) is a non-profit organization working to create social change through the creation of art. TEF was founded by Estria Miyashiro and Jeremy LaTrasse in 2010. It is dedicated to creating lasting systemic social change by empowering local communities to work collectively and participate in our global network. We work towards a society that places value on people and the environment above the accumulation of wealth.

The global Art Project WaterWrites produces some of the biggest works I’ve ever seen, what is the goal of this initiative?

Water Writes is a series of 10 collaborative mural projects in 10 cities across the globe. The theme of water connects the participating communities and draws attention to critical local and international water crises. The 5th Annual Graffiti Battle is happening at the end of the year. What are the origins? And how do you keep the playing field fair?

It started while drunk with Jason Mateo, who worked at Youth Speaks SF at the time. We co-founded and co-produced it for the first four years. The team has grown and this year the battle is in NYC, LA, Honolulu and the finals are in Oakland, CA.

There are always an odd number of judges who are giants in the field. It’s really not practical to assign numerical values to art, and everyone is a winner. Judges are selected locally in every city because they know everyone’s style developments. It’s not fair at all. The winner is the one who bribes us with the most cash! LOL!

What are the minimal qualifications to join the battle? How can writers submit their work for review?

Thanks for your time Estria!

2 thoughts on “Words with Estria”