There are several builds that sparked my interest on the RAUH-Welt Begriff movement back in 2011. With only a few builds back then, there are 4 memorable cars I could easily recall: Stella Artois, Royal Montegobay, Advantage, and Rough rhythm. Considering these creations by Akira Nakai ‘OG status‘, taking photos and featuring it on this site was something I’ve always looked forward to. 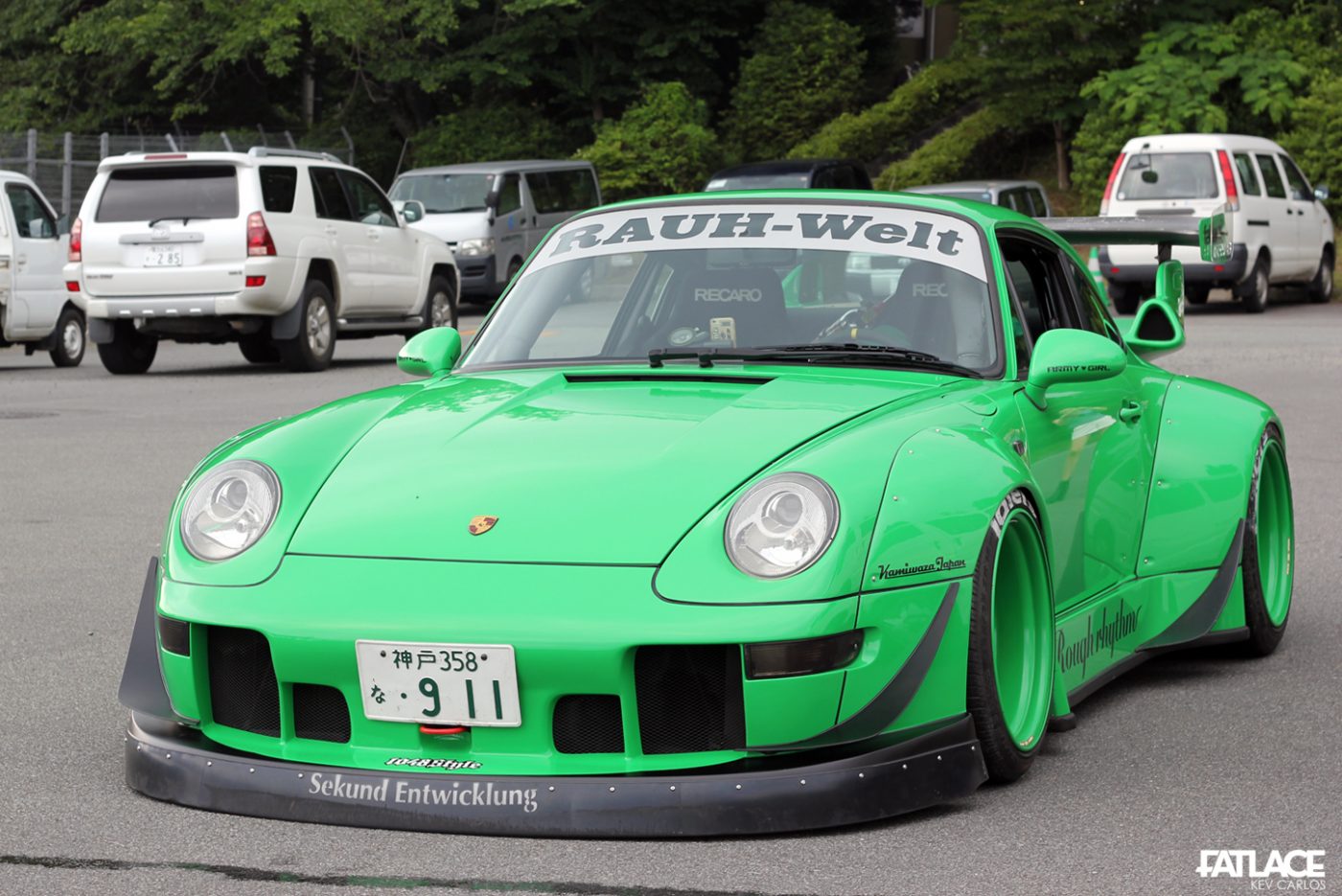 Built for a friend: This particular build is specially created by Nakai-San for Toshiya Ichiraku as a visual symbol to honor their decade-long camaraderie on and off the racetrack. Before Toshi and Nakai officially became business partners, the two had been friendly competitors at a Japanese endurance series called ‘Super Taikyu’. The car known as ‘Rough rhythm’ derived its moniker from their chemistry in life and views on the track. 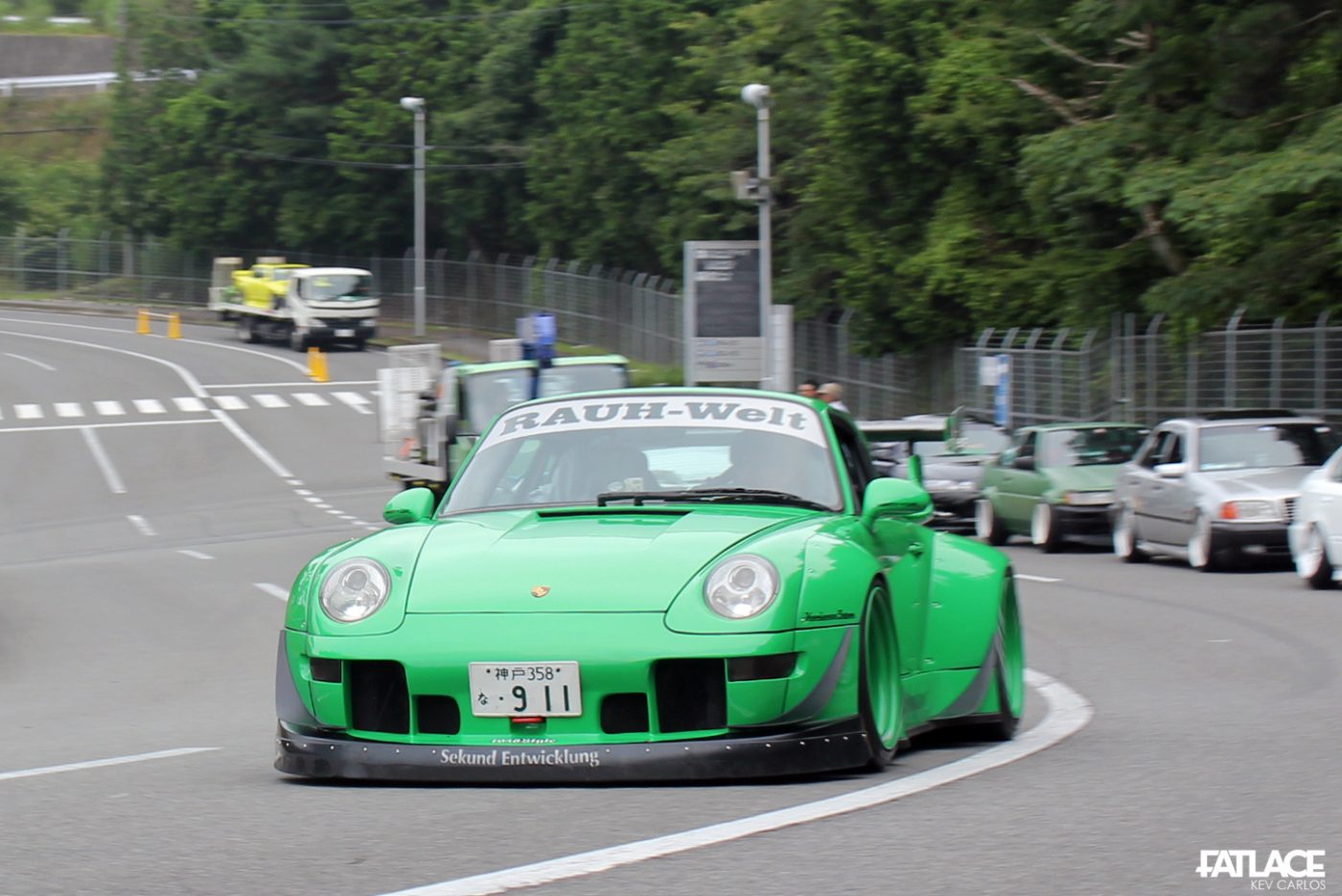 Starting out as a stock Carrera 2S, the car had its ‘Rough’ transformation mid-2011 – 3 months before RWB expanded to international customers. At that time, this marked as Toshi’s 15th Porsche, with his love for the brand – he chose to paint it ‘Signal Green’ paying homage to his early Porsche racing roots. 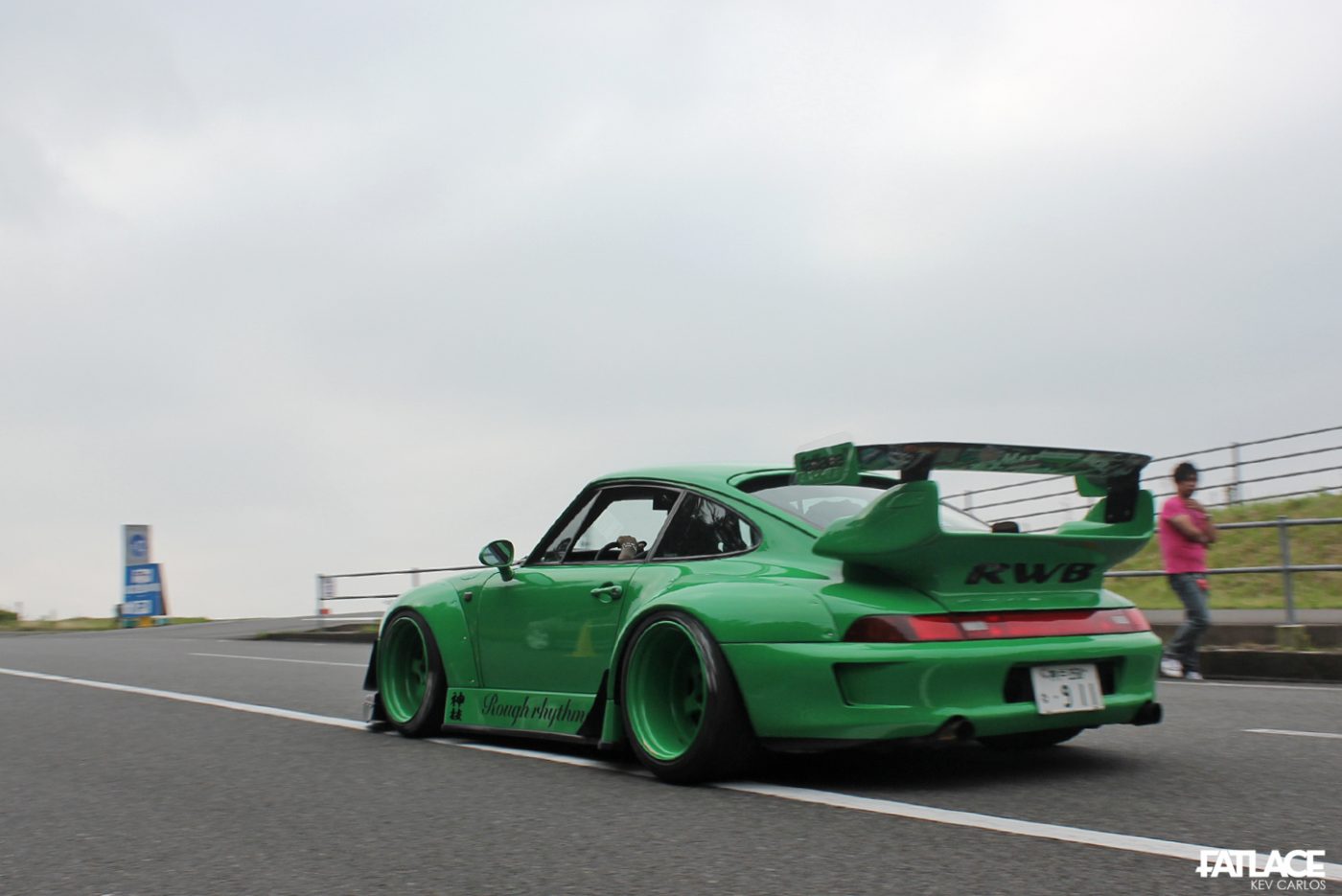 The 3.6 aircooled engine receives additional support from the ‘Tunerhaus’ ECU system, add this with light engine modifications for a good 310HP. 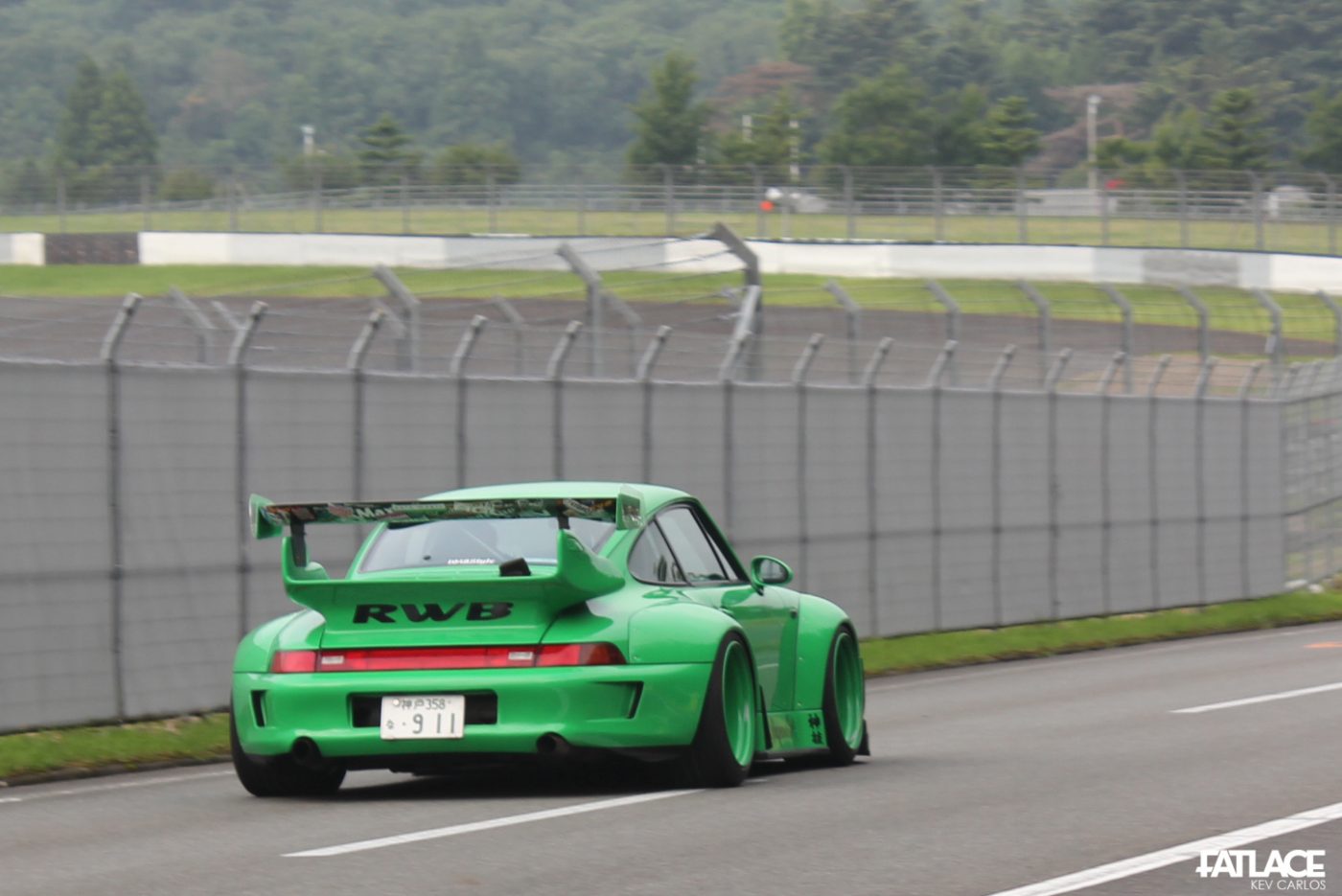 With most RWBs painted dark colors, a fluorescent-like hue emphasizes its ‘man-made’ curves. Just look how wide it is! 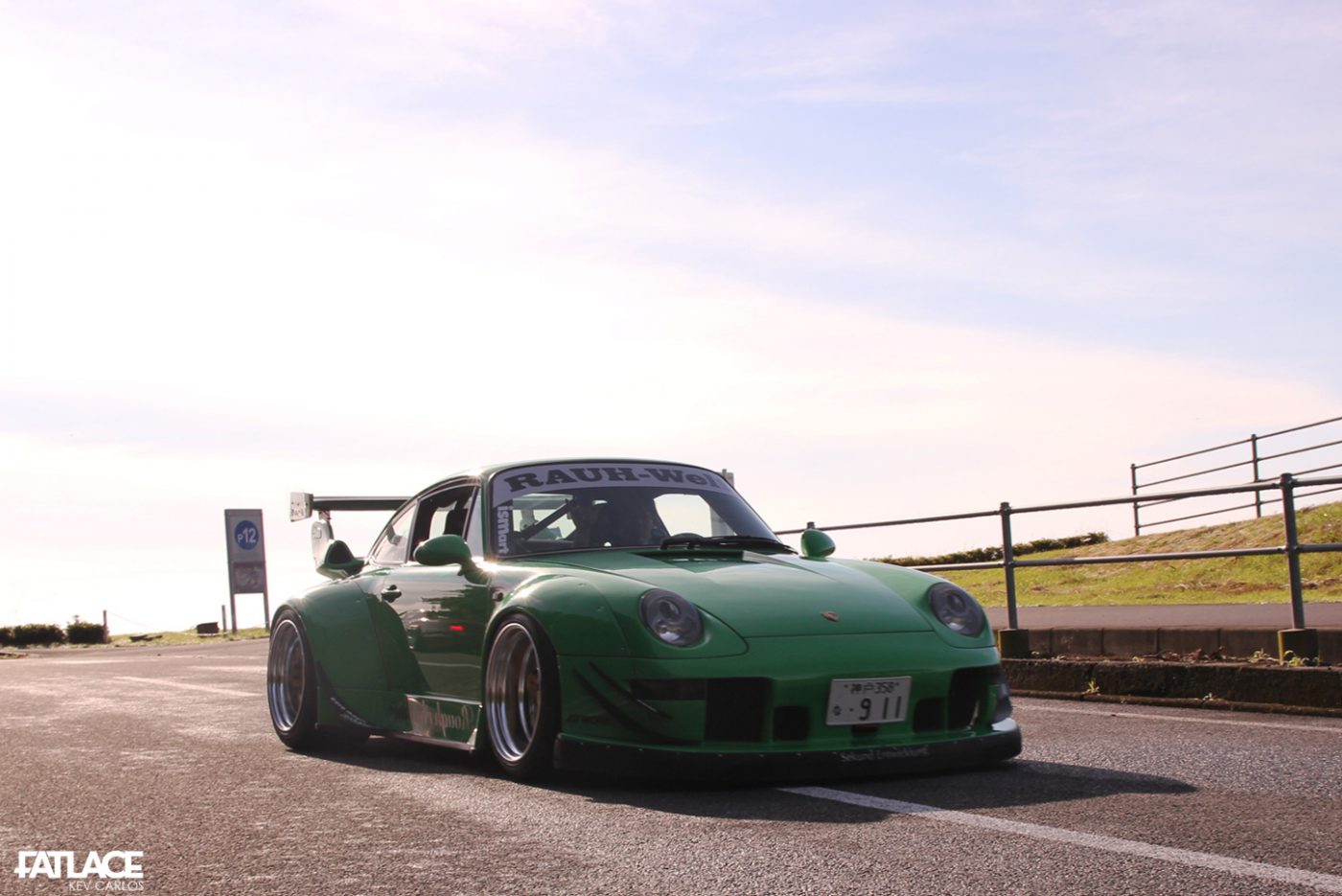 Same spot, different year: During this shoot, as I was in the same spot during the roll-in, memories from Offset Kings Japan 2014 flashbacked. Compared to 2014, Toshi-San changed the color of his wheels from and removed one front canard. Toshi manages to change the look of his car through different sets of wheels, as I speak he previewed his next set: The timeless Volk Rays TE37 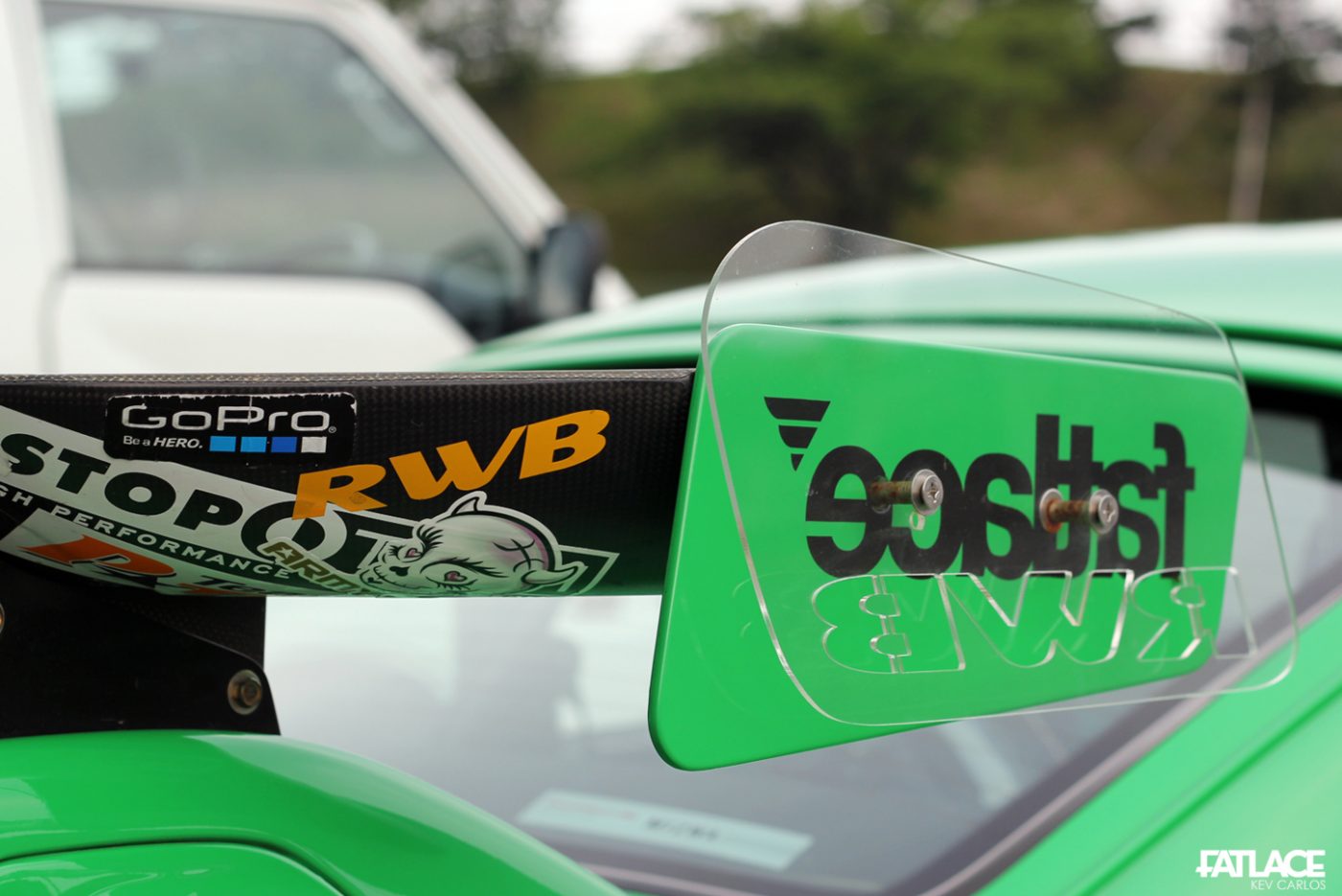 International affairs: As the International Director of RAUH-Welt Begriff, Toshi connects his automotive lifestyle with his own brands such as 1048 Style and ismart. Specializing in this, he also caters to the following labels such as Liberty Walk, BenSopra, Army Girl, JT Mode, Atara Racing wheel, Star Road, Fastes’Cars, Euro Magic, and Sarto Racing. 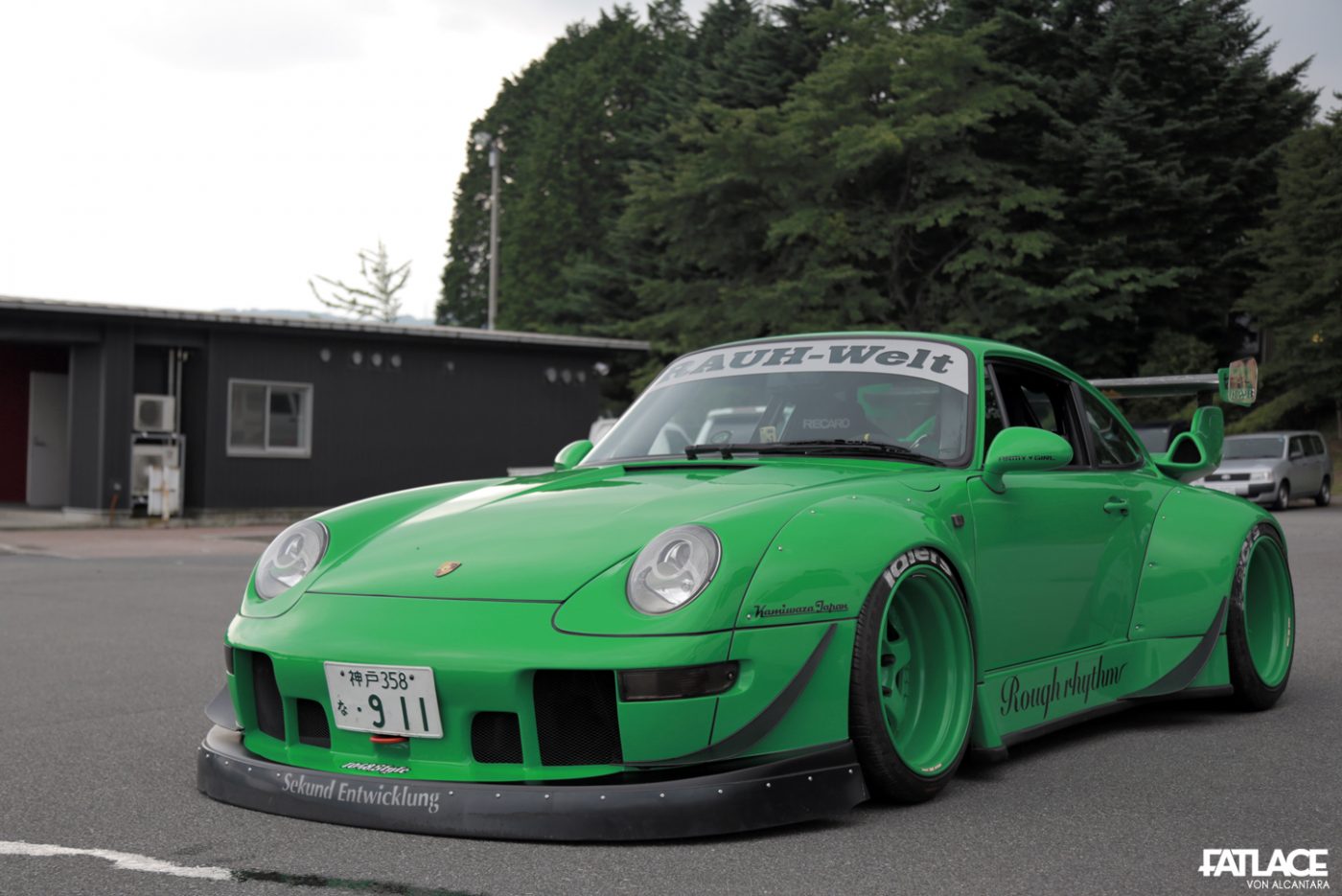 Green on green: Wheels are 18′ 3-piece SSR SP1 Professors, measuring 18 x 10.5 – 13 up front and 18 x 13 -19 at the rear. With only a few millimeters to clear the ultra-wide wheels, RWB’s are all about proper suspension set-up, Toshi and Nakai chose RWB-spec Aragosta adjustable dampers. (Photo: Von Alcantara) 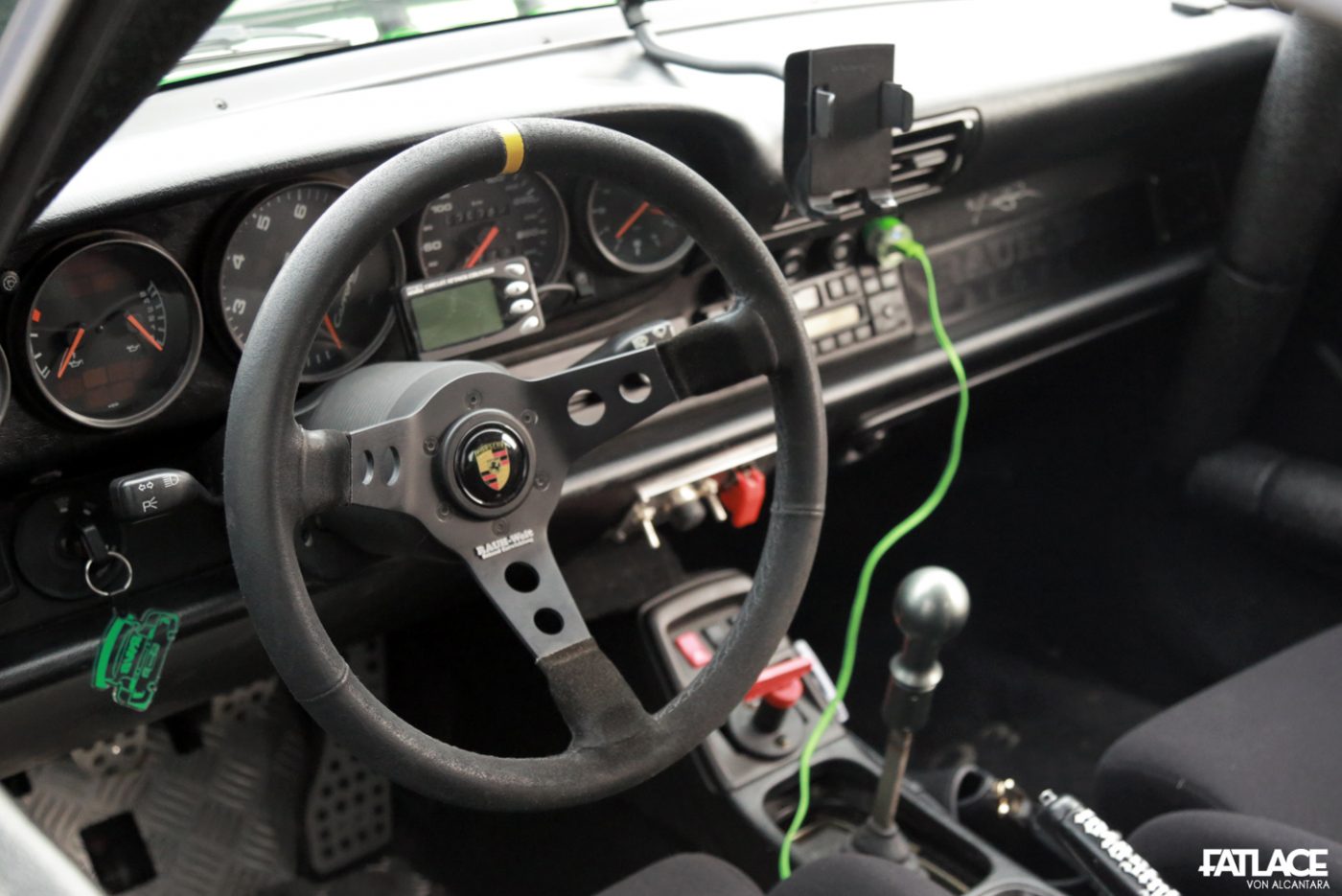 Race ready: As a full track car, the car has been installed with a roll cage, Recaro bucket seats, and an HKS Lap Counter. Look closely and you can see its counter-clockwise rotated tachometer, a race-esque touch I’ve been seeing in classic Porsche race cars. (Photo: Von Alcantara) 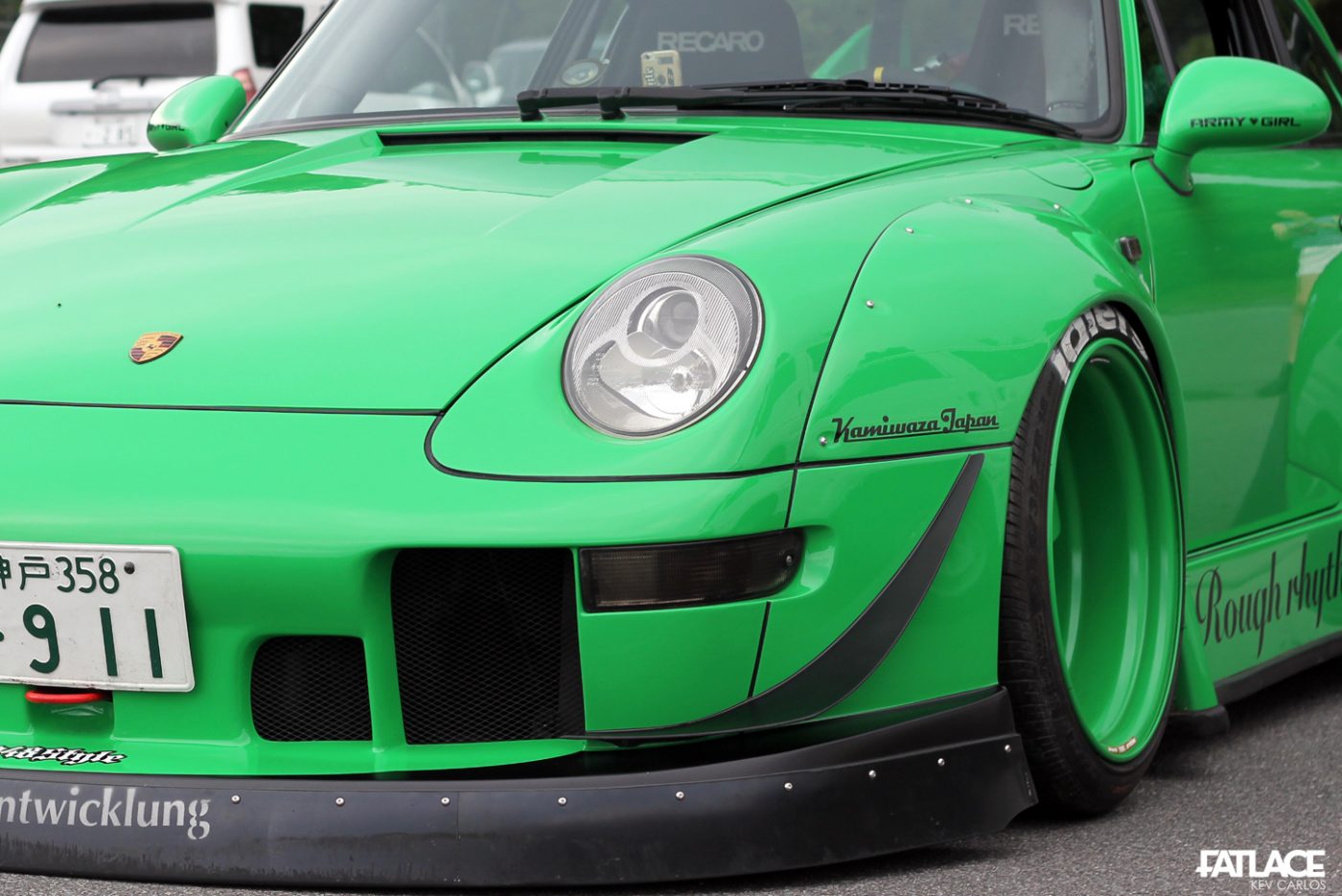 Toshi treats ‘Rough rhythm’ like his other cars, as he drives it around the streets of Tokyo with this ride height. 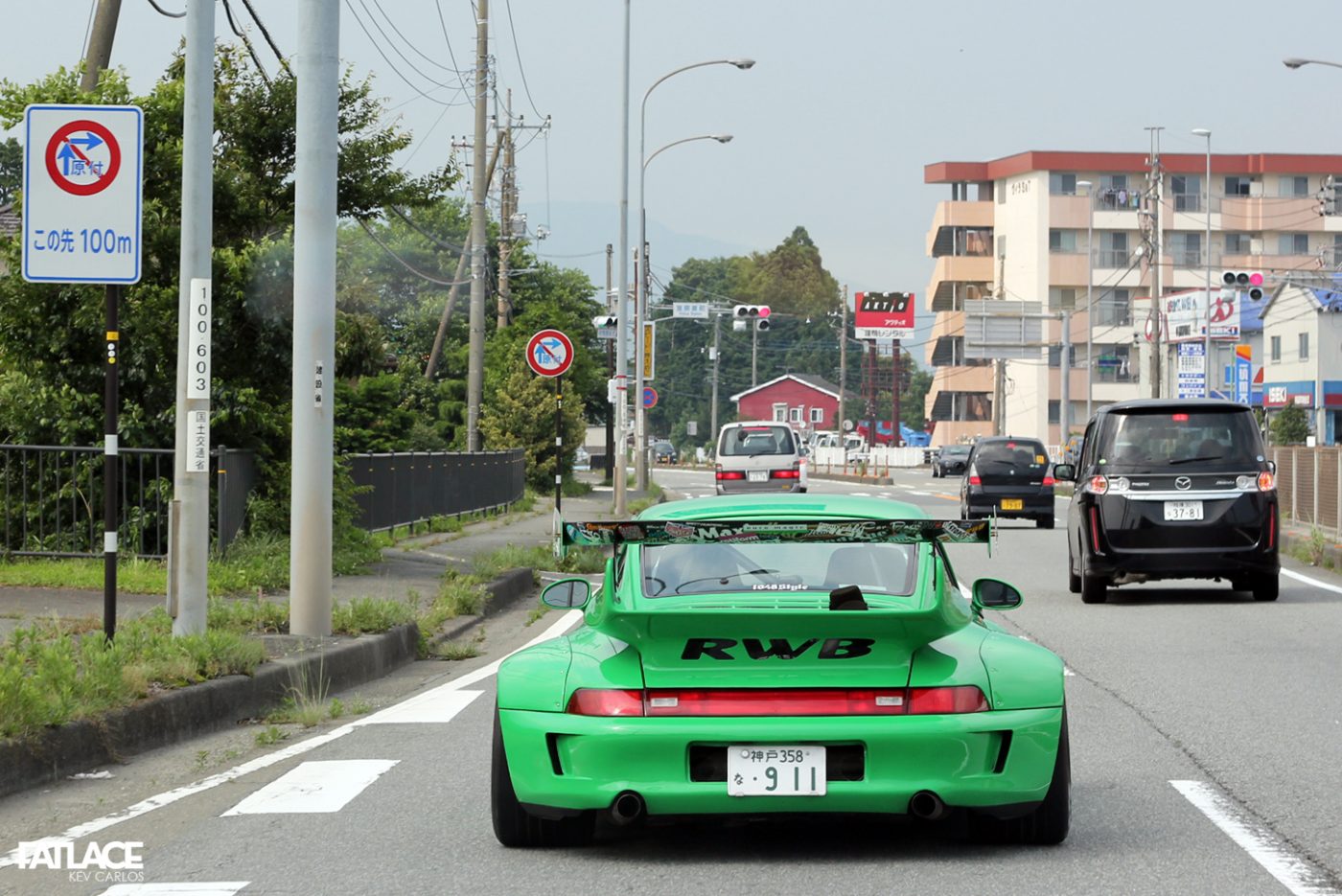 Check out some of my RWB features: