Parked perfectly on the grounds of the Four Seasons surrounded by palm trees with a view of the ocean and the sounds of waves crashing gently on the sand sat the 2018 Lexus LC 500. The picturesque setting was quite fitting for the press launch of the all-new LC coupe. 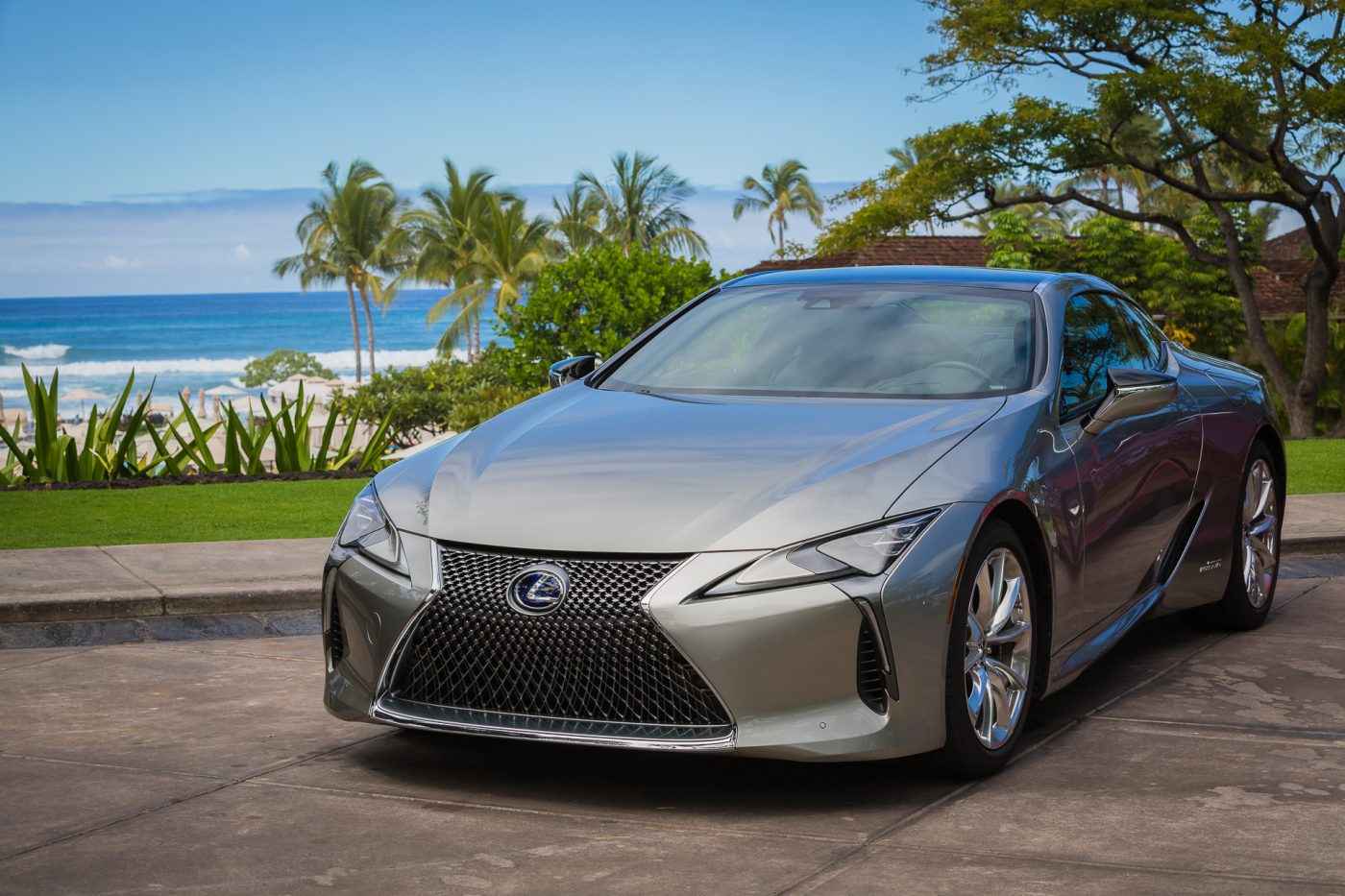 The island of Hawaii, better known as the Big Island, has a diverse terrain that spans between sandy beaches to lush rainforest to volcanic rock. Much like the island itself the Lexus LC 500 is a sleeping giant. On the exterior the vehicle evokes emotion with its sleek design, eye-catching stance, and beautifully elegant interior. Yet, underneath the surface and naked to the eye, lies a monster with a powerful 5-liter V8 engine with 471 horse-power ready to explode at a moment’s notice capable of 0-60 mph in less than 4.5 seconds. 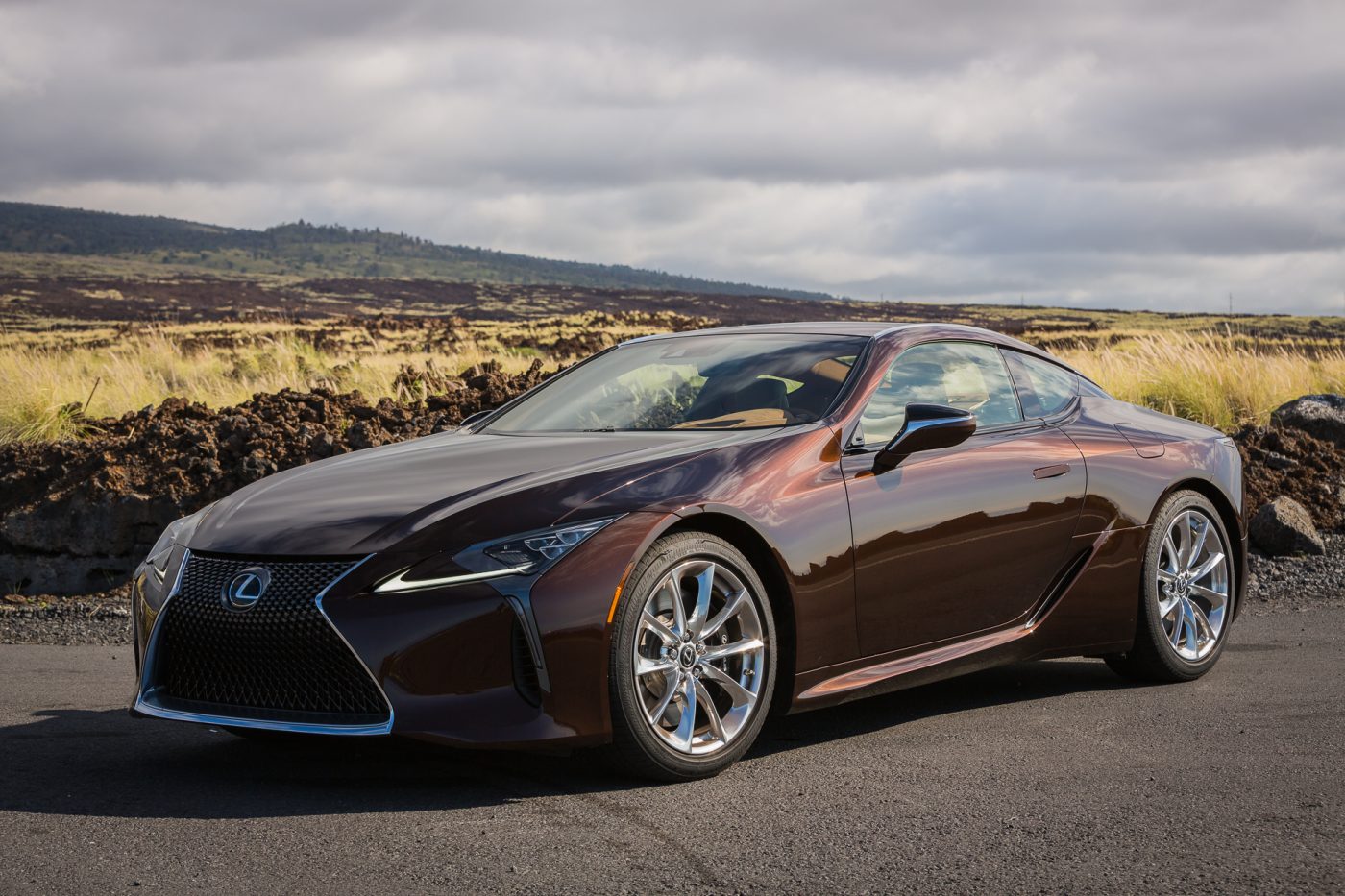 Staying true to the LF-LC concept car that paved the way to introduce the new GA-L (Global Architecture – Luxury) platform, the LC keeps much of the design language that made the concept a smash hit. The wide and muscular fender arches hug tightly over the sporty 20-inch wheels, while the sloped hood curves down to meet the Lexus signature spindle grille making a prominent statement. 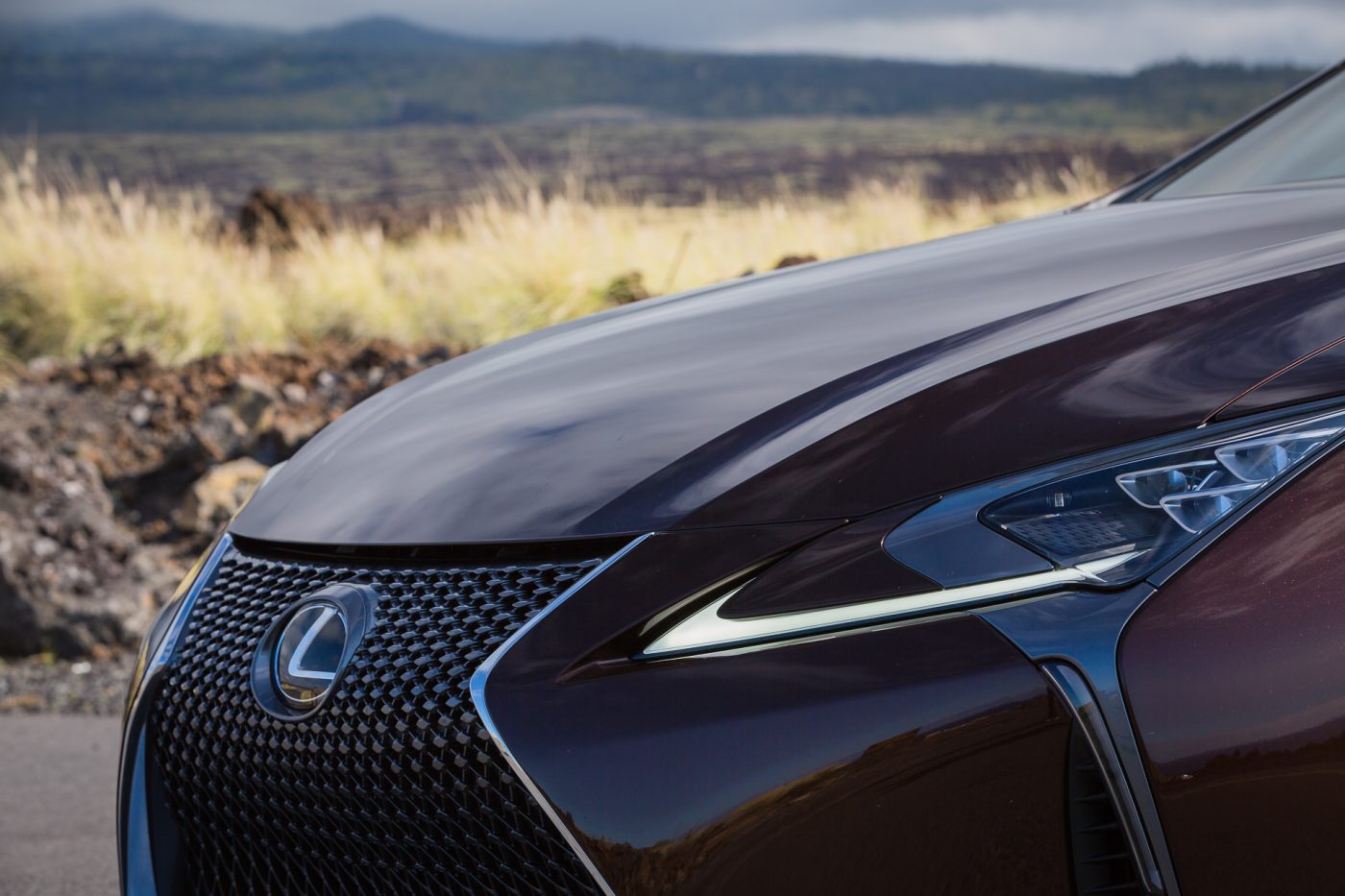 The two-door coupe’s roof and rear glass window almost meld together in a singular uniform shape connecting to the beefy and angular rear. Blacked-out rear pillars are edged with a slice of chrome giving an almost Japanese sword-like appearance. Rather than take away from the smooth and continuous body lines of the vehicle, flush door handles were incorporated that illuminate when they pop out. 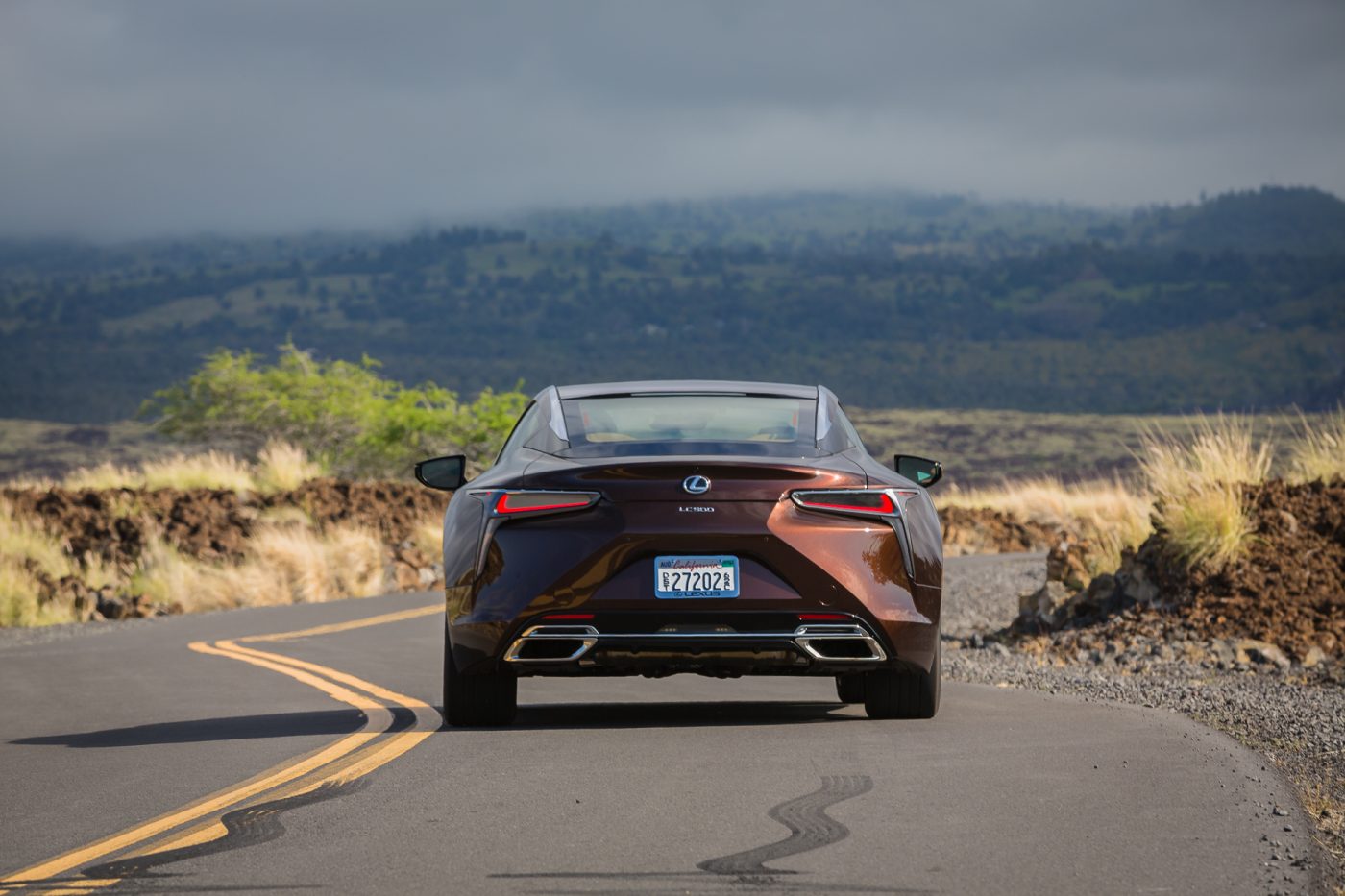 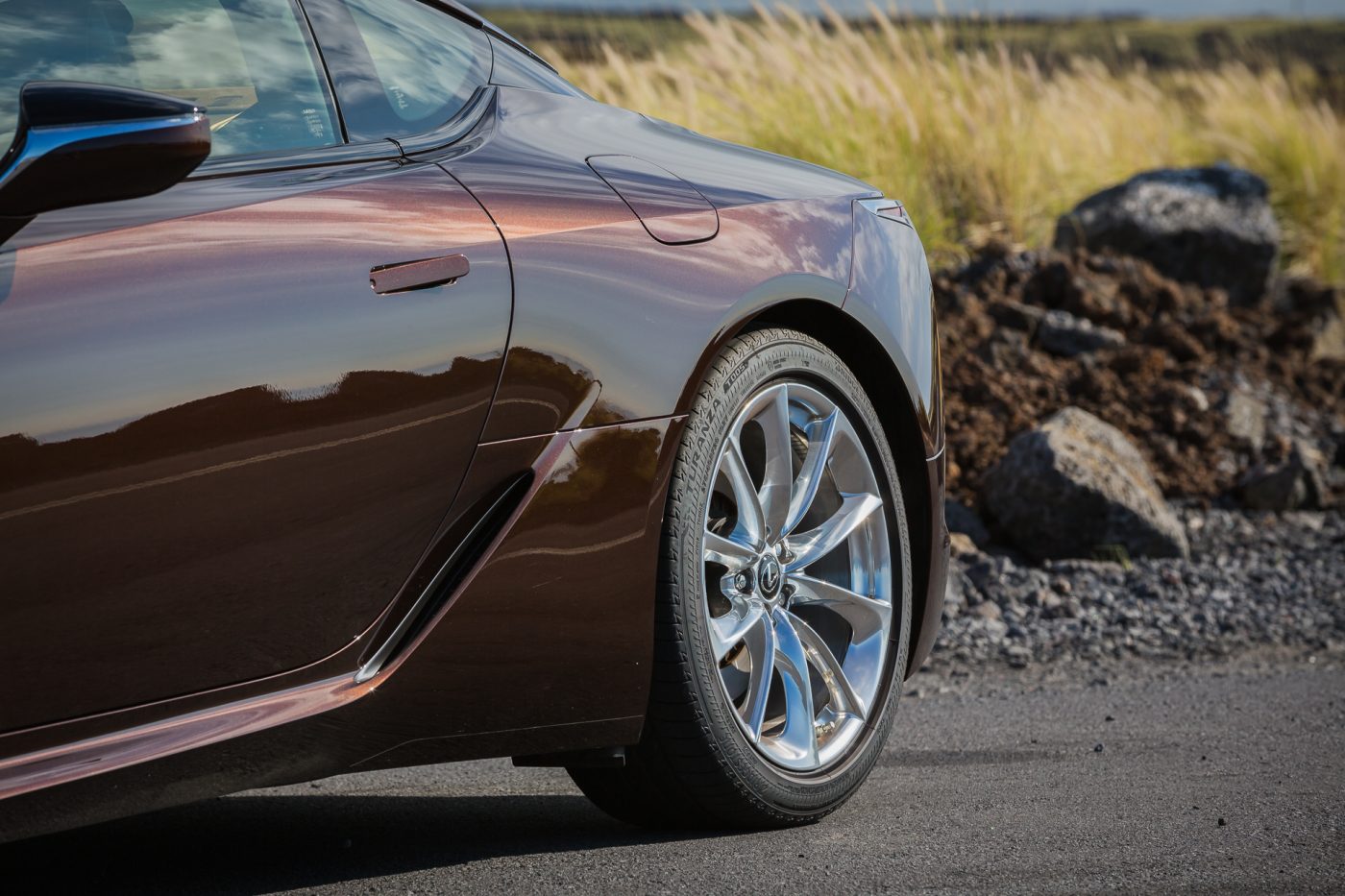 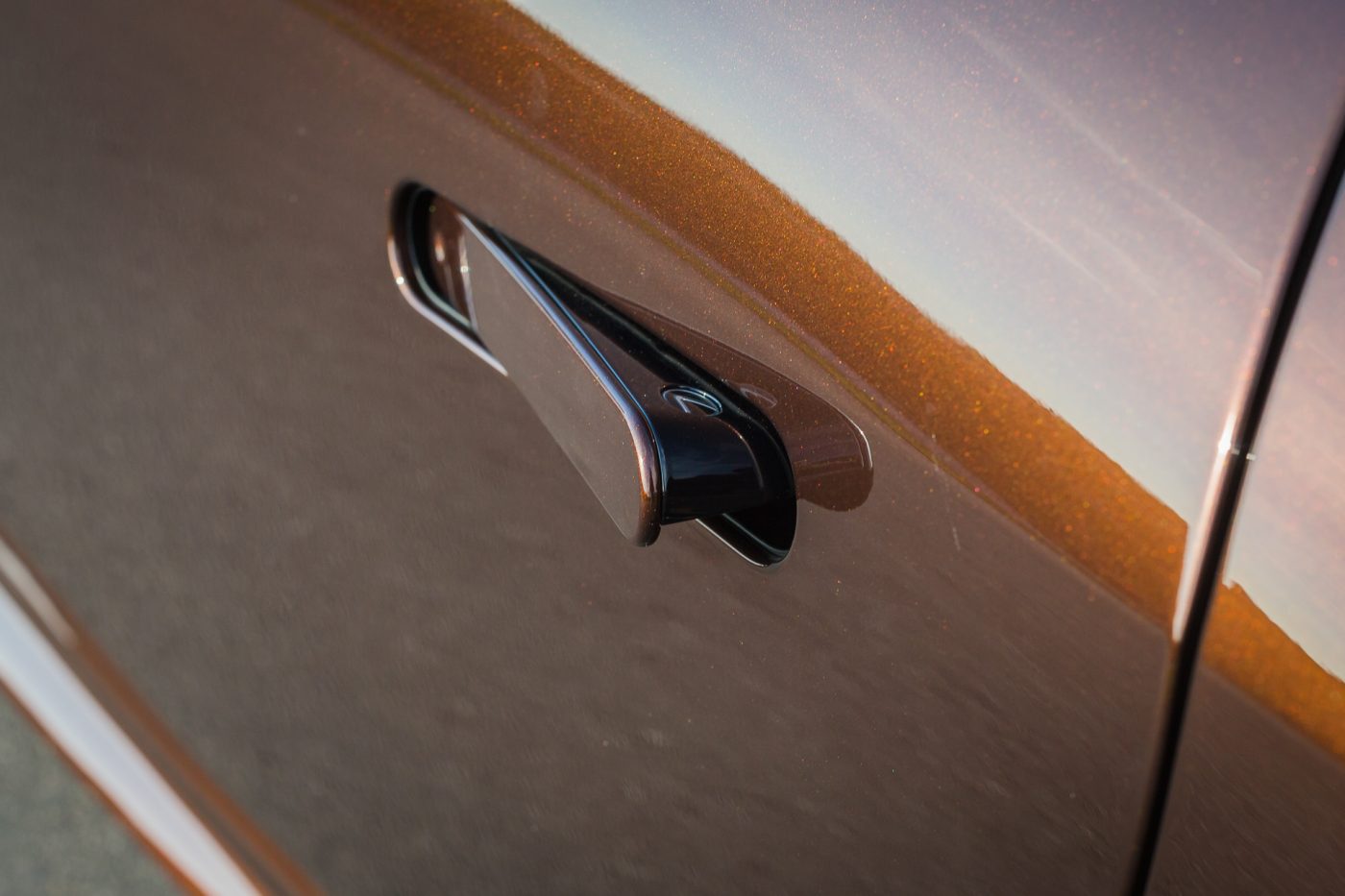 New ultra-compact Triple projector LED headlamps coupled with L-shaped daytime running lights are both innovative and seductive, drawing attention to the aerodynamic front end. The rear LED tail lights are slim in profile and use mirrors to create a three-dimensional sequence of L-shaped graphics. The letter “L” is scattered throughout the design language of the vehicle like little hidden Easter eggs. 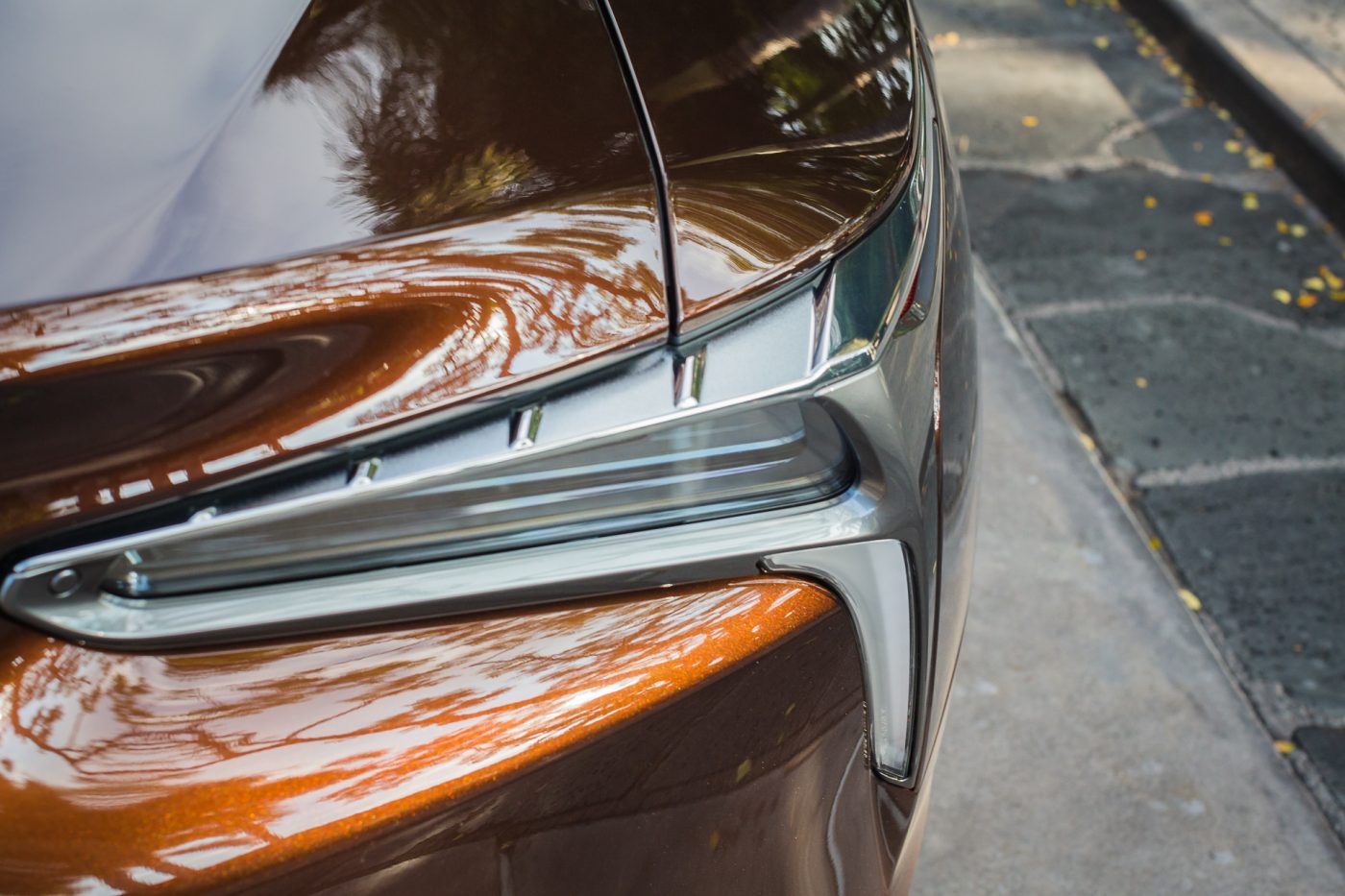 The cockpit is flush with features and amenities and well deserving of the “Experience Amazing” tagline. The buttery soft caramel leather (in the model tested) paired well with the alcantara throughout the cabin. The stitch pattern found on the doors flows and gives a sense of motion through the cabin. While in the driver’s seat, you feel like you’re in command of a luxury spaceship with a responsive steering wheel complete with magnesium alloy paddle shifters, futuristic instrument panel, and 8-inch LCD TFT multi-information display complete with navigation and back-up camera along with a host of entertainment apps. 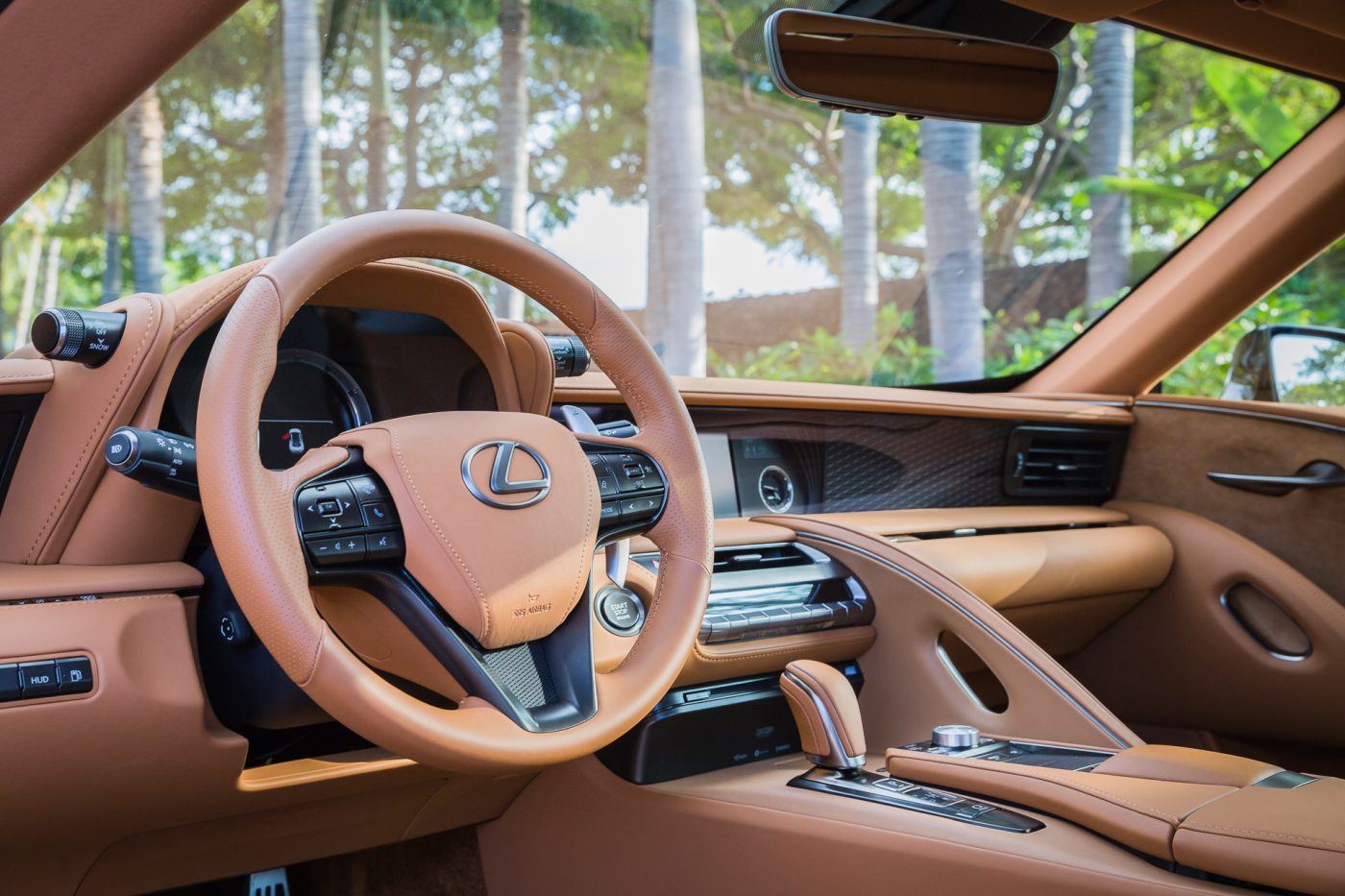 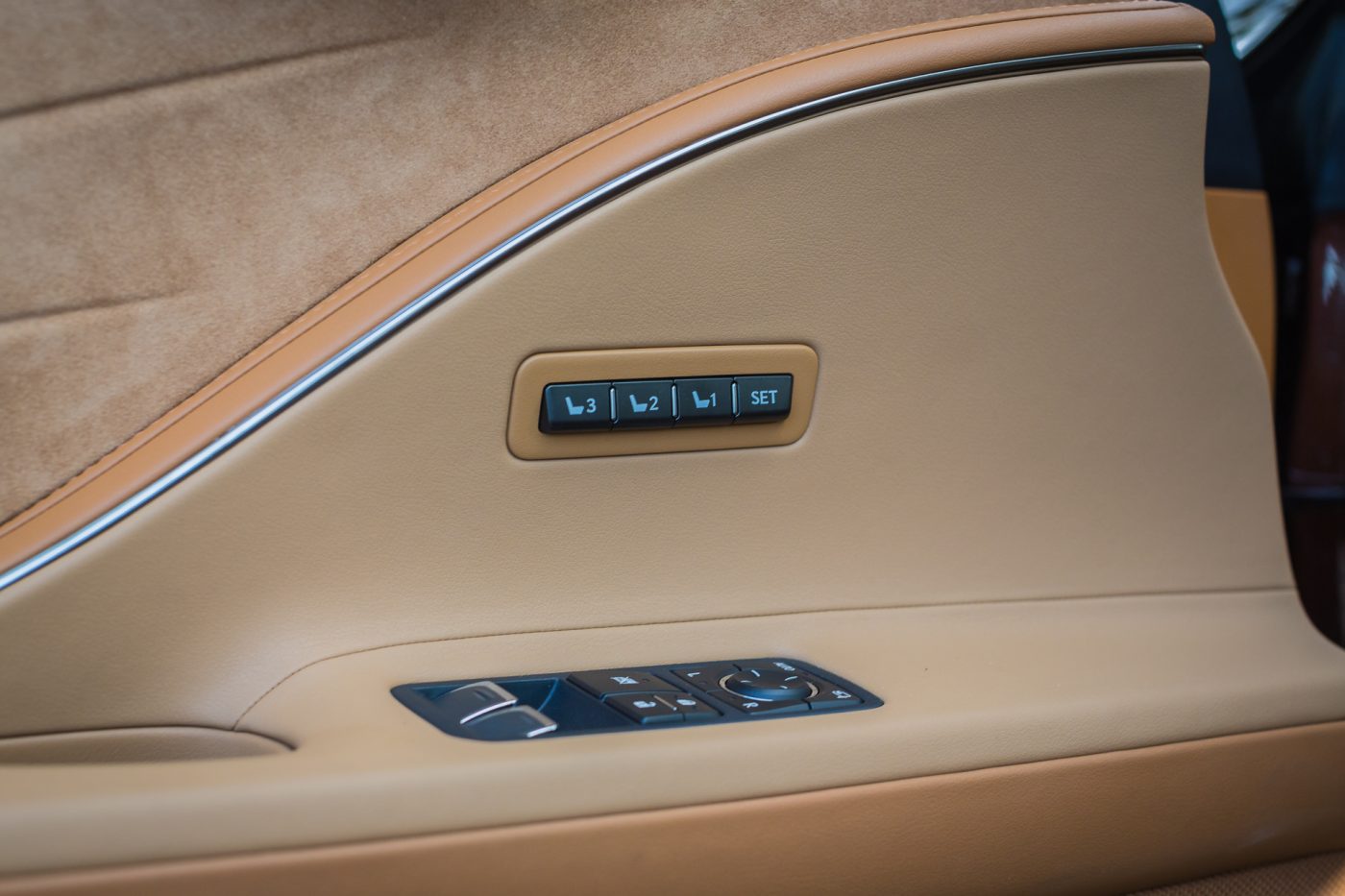 The fine interior details are a cut above other cabins. First is the fact that the driver’s hip point is set as close to the car’s center of gravity for ultimate control, a satin metallic finish is found throughout the interior giving a sense of luxury, and the rest of the chosen materials just feel and look superior including the hand-stitched leather wrapped gear shift knob to the aluminum pedals. Filling the air was a 13-speaker Mark Levinson speaker system that blasted a range of music from the Ventures to Jack Johnson adding to the Aloha spirit on our journey. 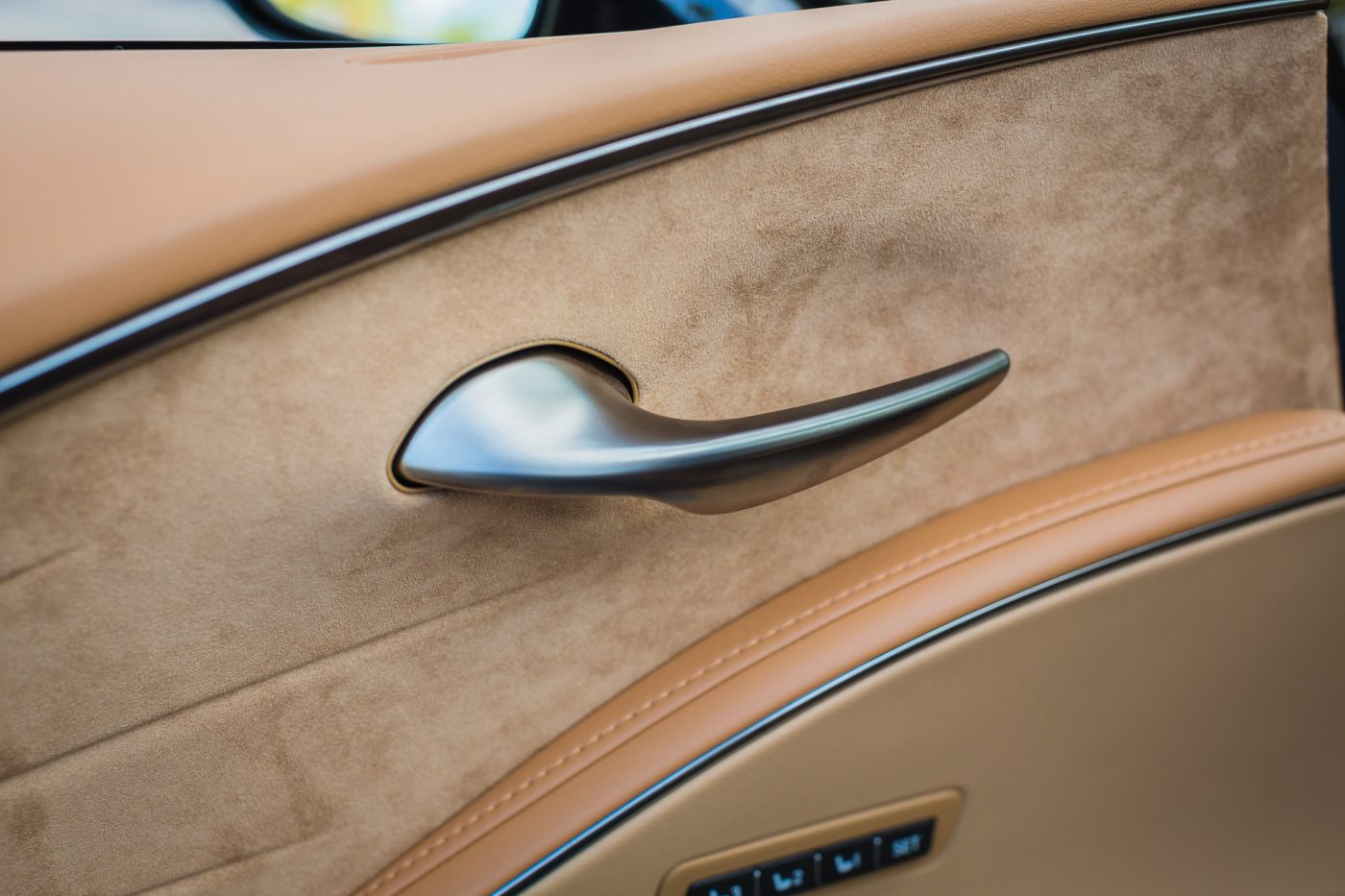 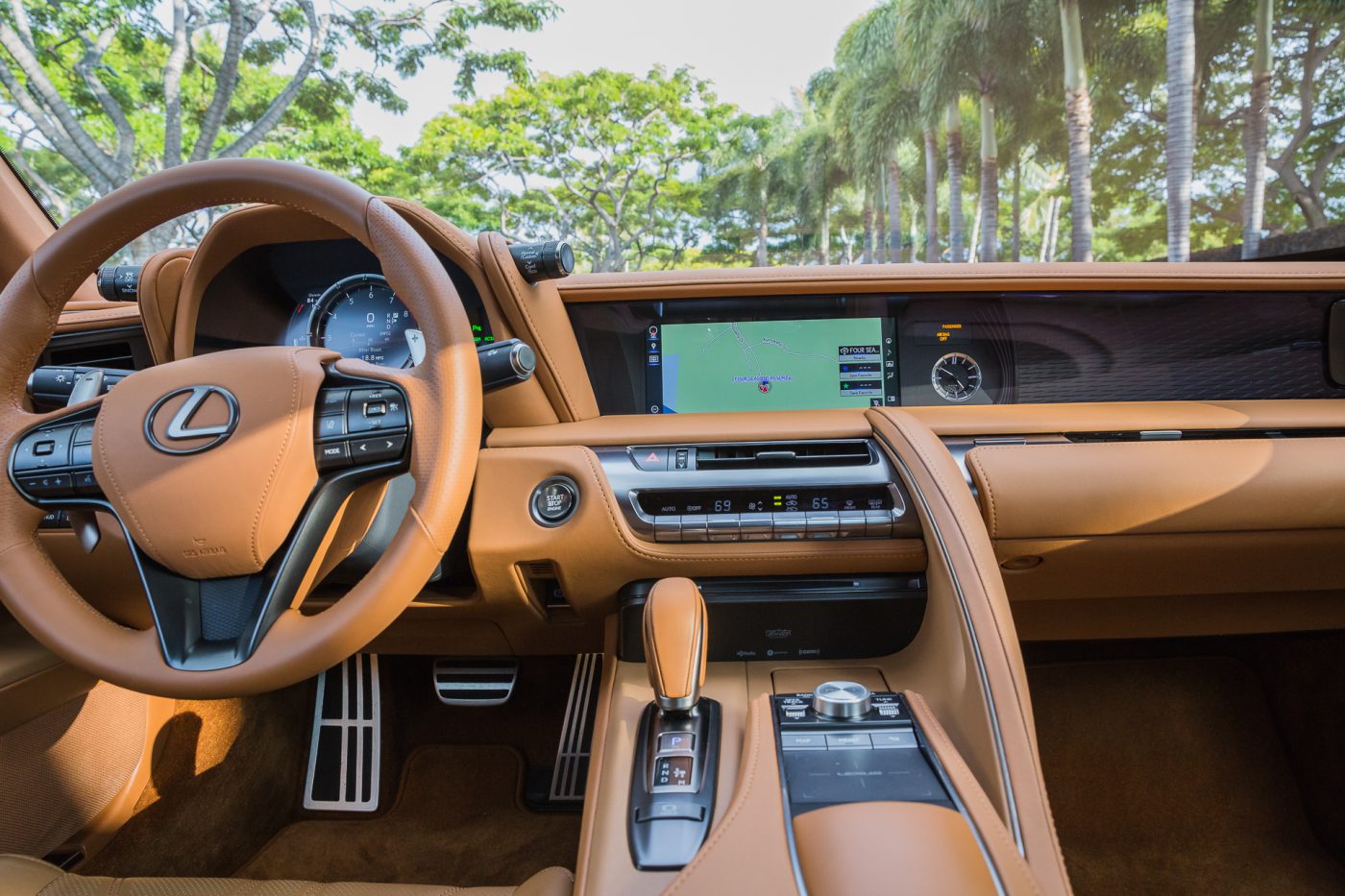 One low point is the Remote Touch Interface, which takes a bit too much time to get the hang of and is not as intuitive of a touch control as say your smart phone. I found it to be quite cumbersome to use, yet still a touch better (no pun intended) than the mouse like joystick found in other Lexus models. Another thing worth pointing out is the 2 + 2 seating would require smaller humans to really make use of the back seats. Storage capacity is a bit on the small side within the trunk being quite shallow, but enough to fit at max a golf bag with clubs. 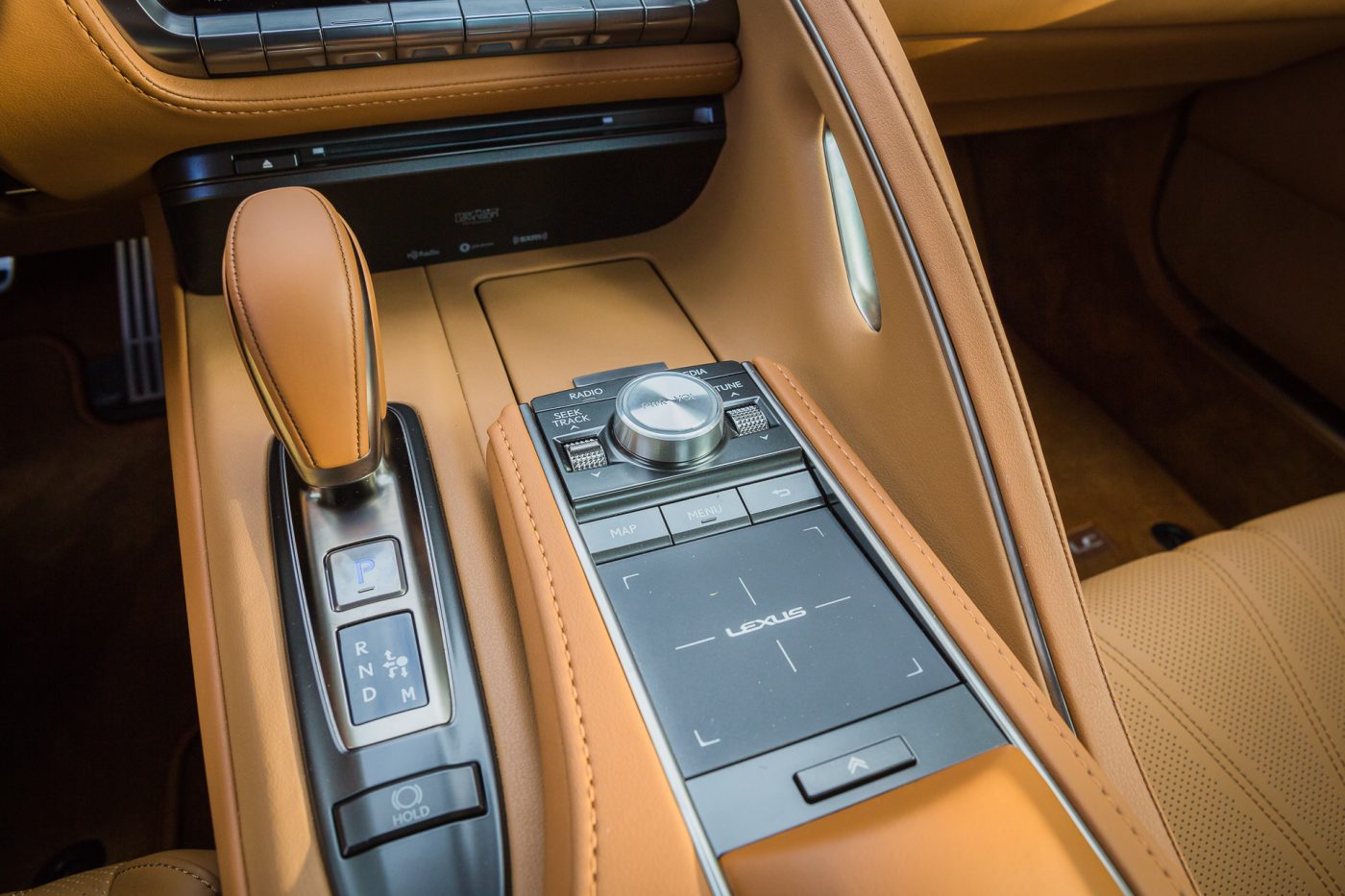 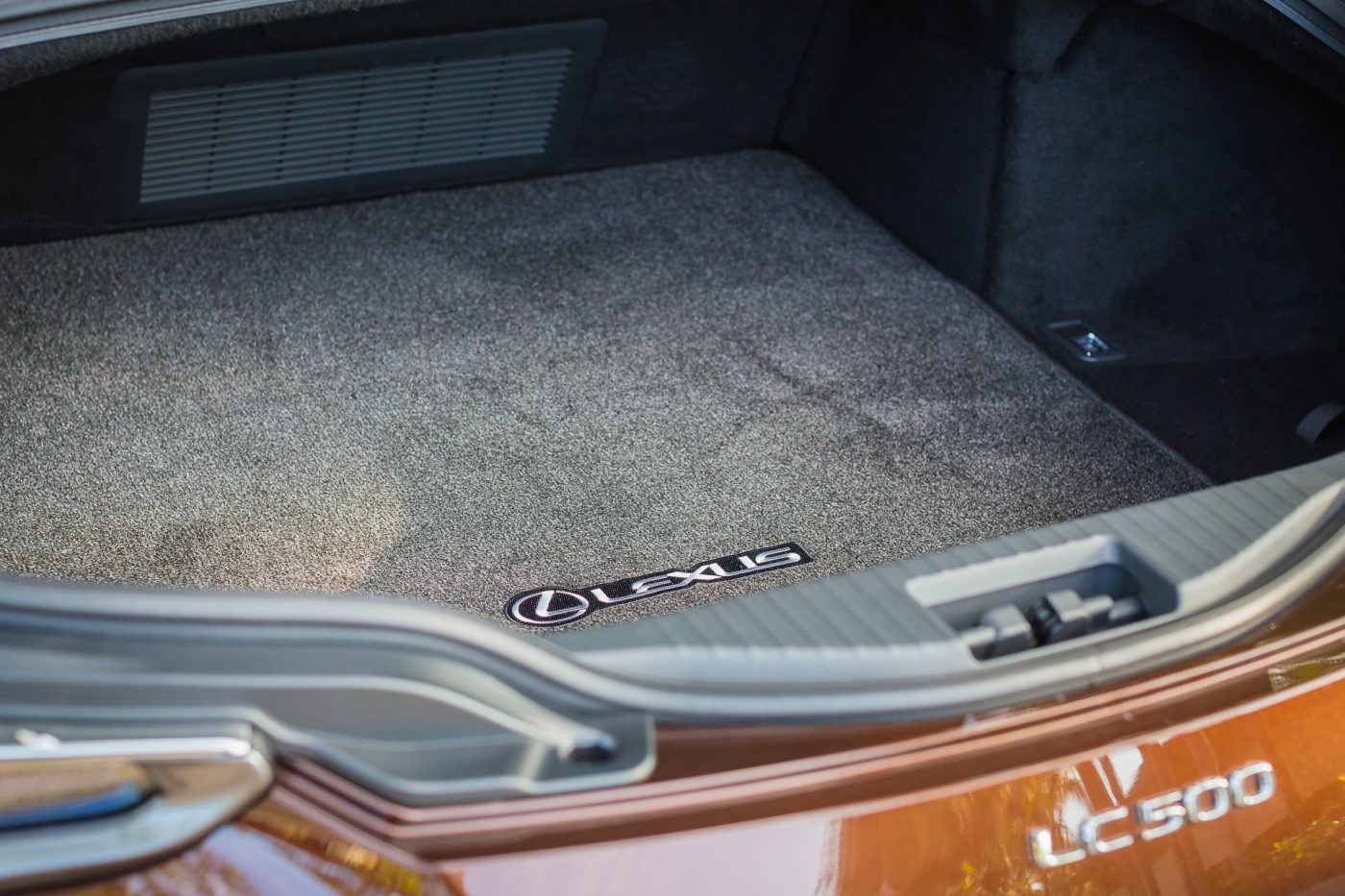 The Big Island’s landscape makes any drive a scenic one. The green fields and lava rocks were a blur as we drove through the countryside. Surprisingly, the roads on the island are rather smooth making for the perfect set-up to test the agility of the vehicle. The LC accelerated swiftly and smoothly through the 10-speed automatic transmission, a first for a luxury automobile. A spirited sprint on a clear road while in Sport+ mode left my co-driver and I smiling as the cabin filled with the beautiful sounds of exhaust notes. 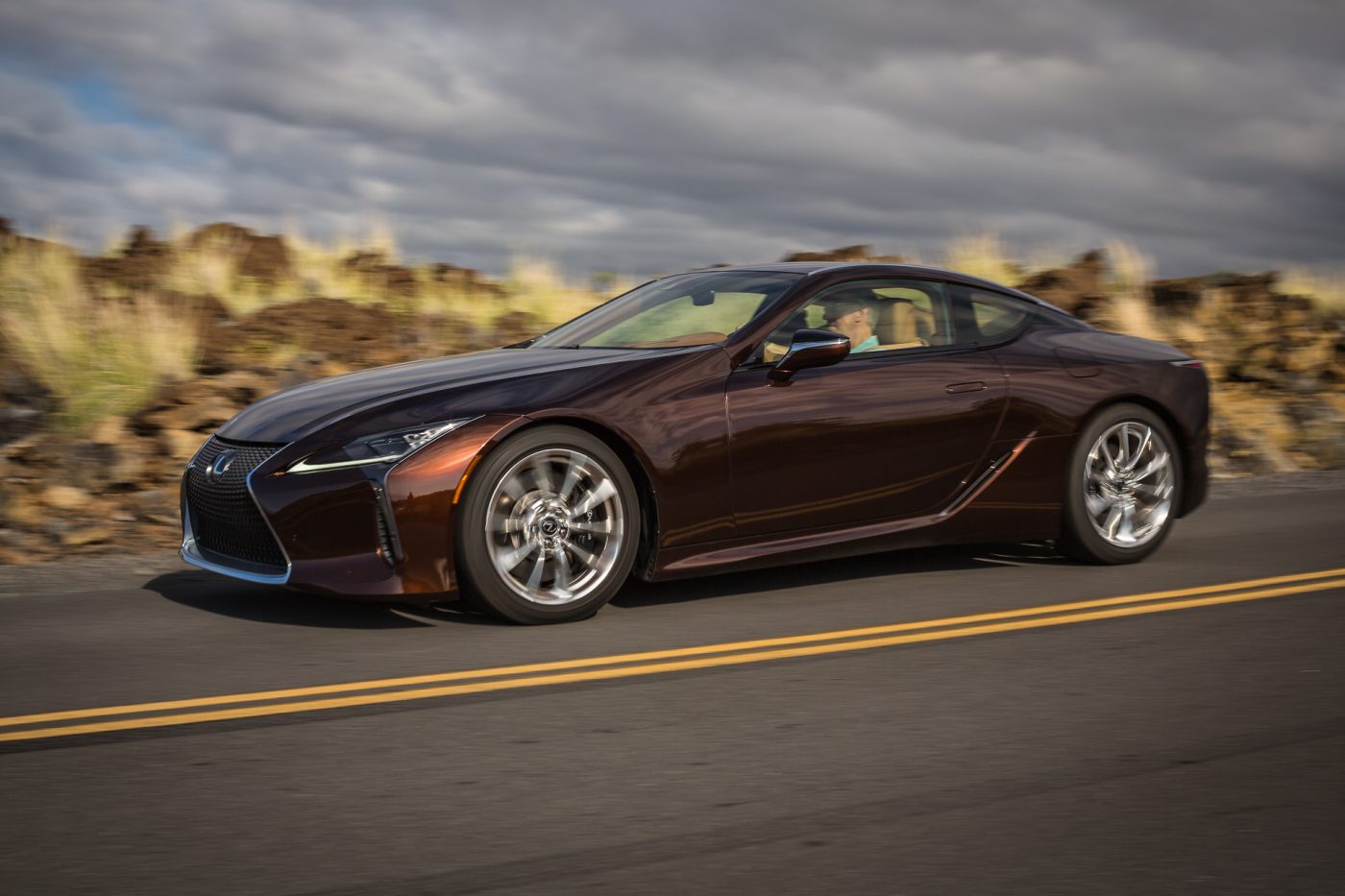 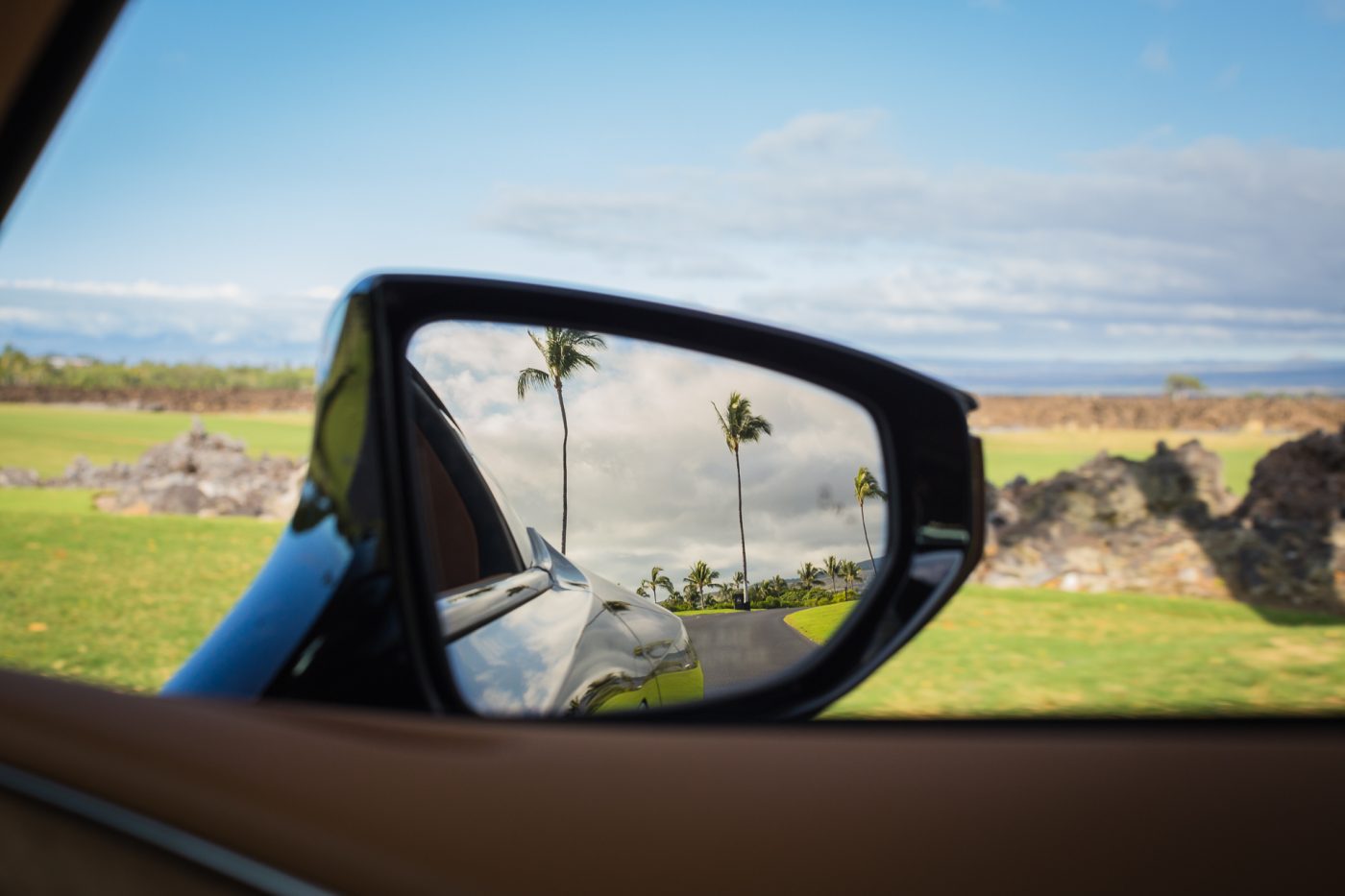 The vehicle gracefully handled as a sports car through the twists and turns of the backroads. The response was immediate and precise as the tires gripped the asphalt. Island life moves rather slow especially when compared to the hustle and bustle of Los Angeles, yet the traffic is quite similar. As we made our way through the island and approached the inevitable group of cars with their brake lights shining, the LC’s four-wheel power-assisted disc brakes with ABS slowed the vehicle down softly. 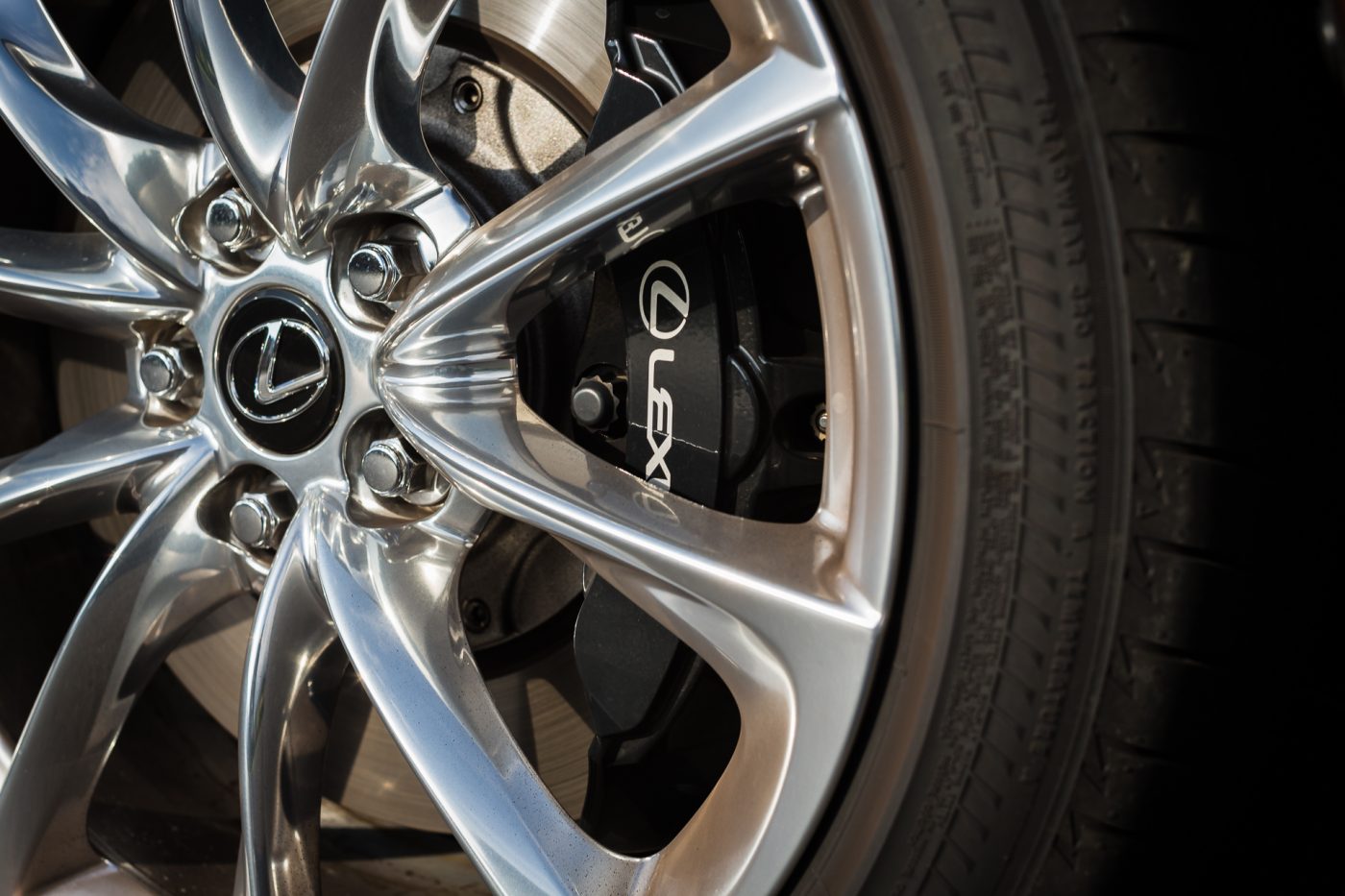 We were also able to test out the Lexus LC 500h. The hybrid counterpart is very similar to the LC 500, but powered with a 3.5-liter V6 capable of 354 hp. Newly introduced for the LC 500h is a Multi-Stage Hybrid System that allows for more electric assist at lower speeds. In all honesty, the hybrid drove very similar to its full gas guzzling sibling, yet there is something about the sound and feel of the V8 that is a bit more raw and satisfying. 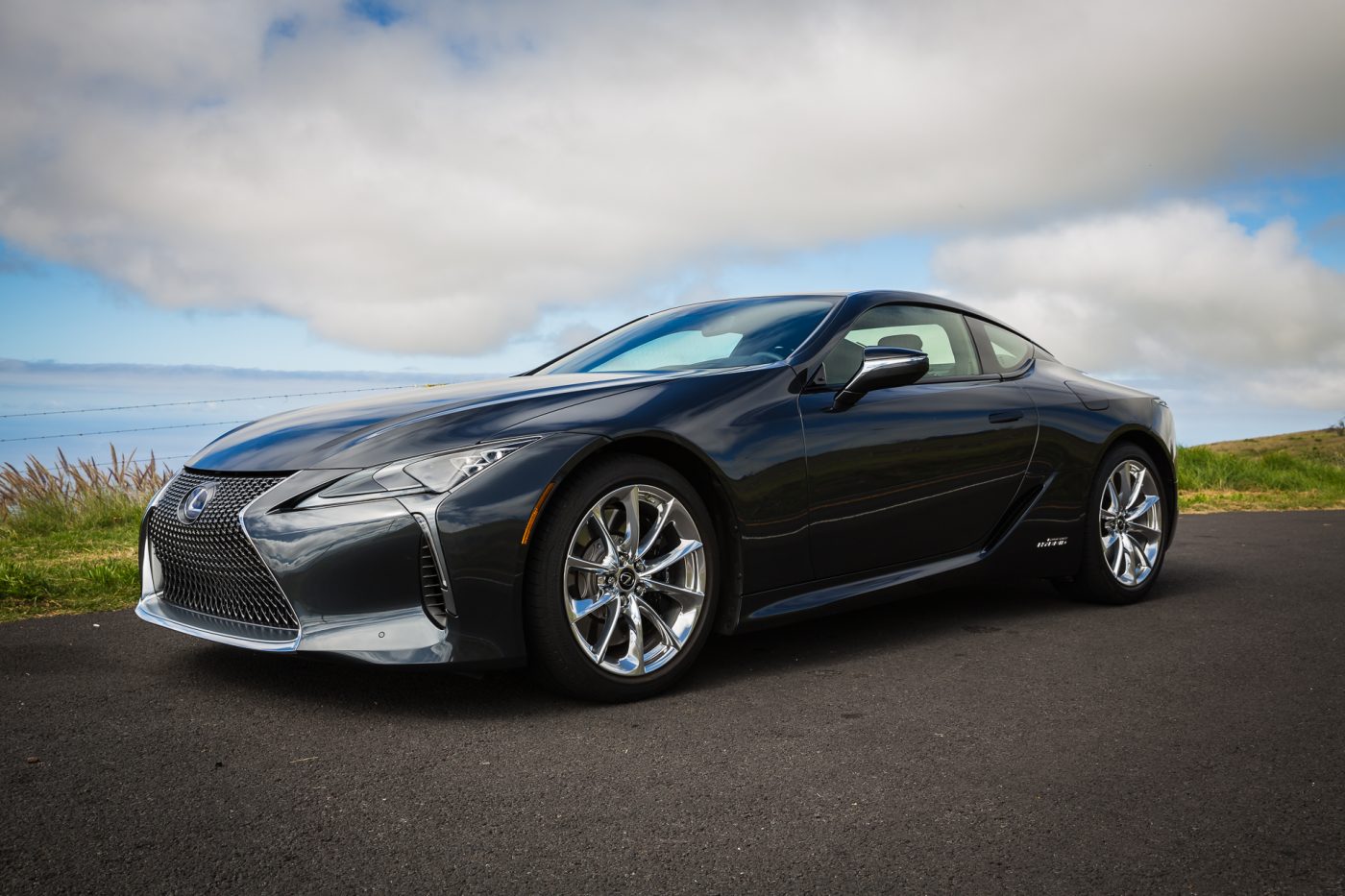 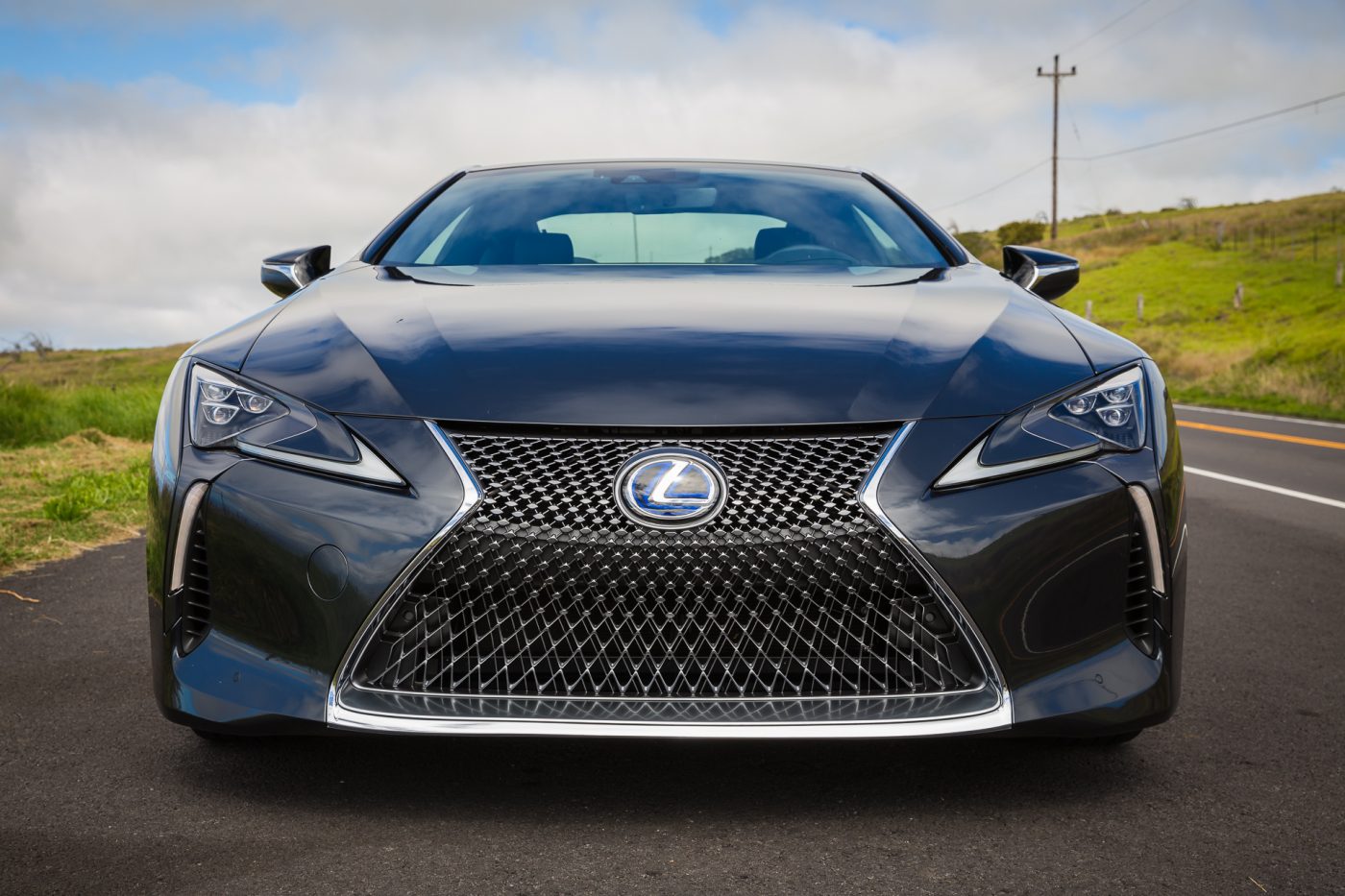 Luxury, performance and style come at a price with the LC 500 starting at $92,000 and the LC 500h starting at $96,510 for the hybrid. Yet, the sub 6-figure pricing seems like a bargain for a flagship vehicle that puts the driver first and succeeded in creating a car that is definitely “Not Boring”. The LC 500 is the Lexus we all want.