The internet is funny. You can get info about practically anything and everything and that information can either be true or twisted. One thing I know for sure is that you really shouldn’t believe everything you read or hear on the interwebs until you hear it from the person itself… 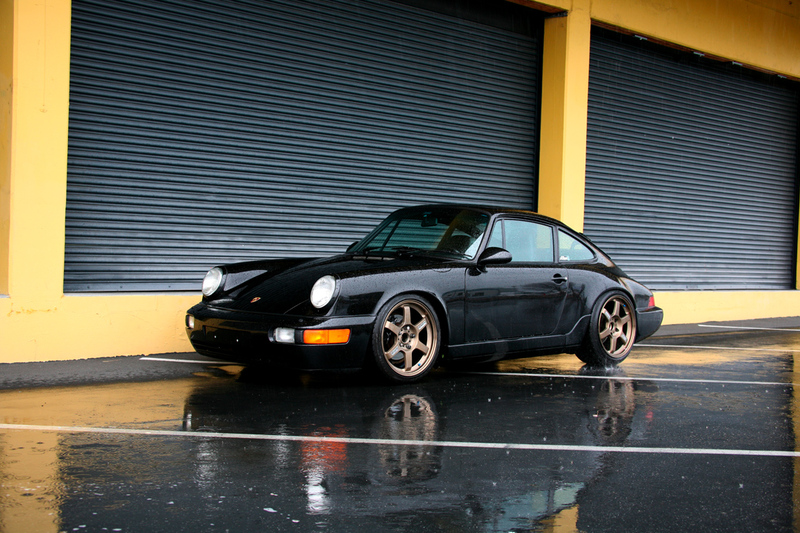 In 2007 back when I worked at Nike in Oregon I decided to pick up one of my dream cars, a 911. I knew one day I would pick one up as it was one of my favorite cars growing up as a kid. I bought and collected 911 toys small and big. I purchased a 964 C4, the AWD version and living in Oregon at the time gave me the traction I needed being it so wet. As a kid, a movie called No Man’s Land was one of my favorite movies of all time (Black Rain came in first). Going fast and stealing Porsches was what it was all about. If you haven’t seen it, I suggest to check it out. It might be super corny today but back then I thought it was pretty crazy the way they drove the cars in the movie. A truly influential movie about Porsche’s as it had me thinking about them constantly. Anyways, I pulled the trigger after reflecting where I was in my career and thought an old school Porsche would be perfect. 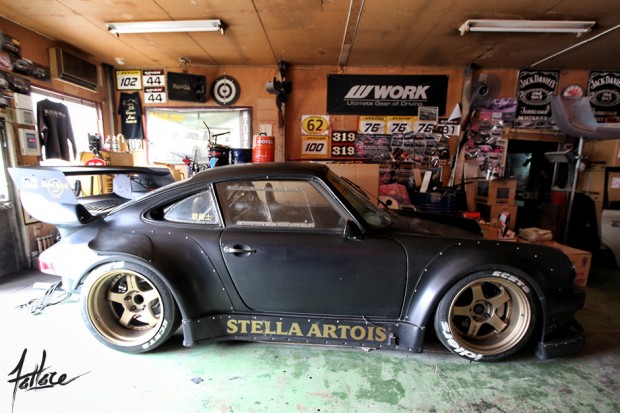 I believe Rod from Speedhunters showed me a photo in 08 that inspired me to get my 911 to where it is today. But as you may not know, working for a mega-corp gives you little to no time to work on projects so the car stayed the same for the last couple years. I personally installed some Recaro’s, a steering wheel, KW’s and TE37’s for a JDM/Euro look, slammed it and called it a day. I loved the way it looked but at the same time having a RWB car would be awesome. 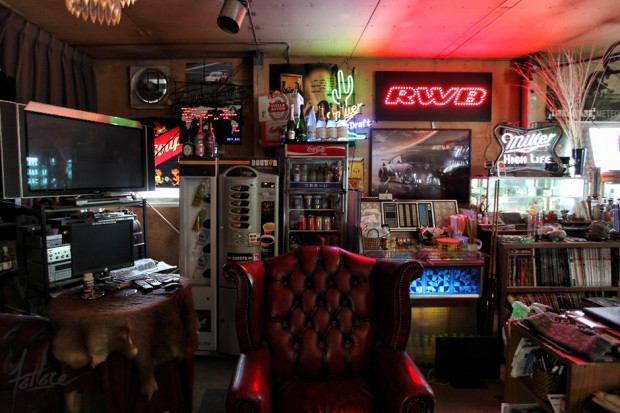 Fast forward a few years and after talking with Jon Sibal about RWB, he gave me the RWB contact. I talked to the RWB guys and purchased a kit and let them know I wanted to meet them in person and made the trip to Japan. 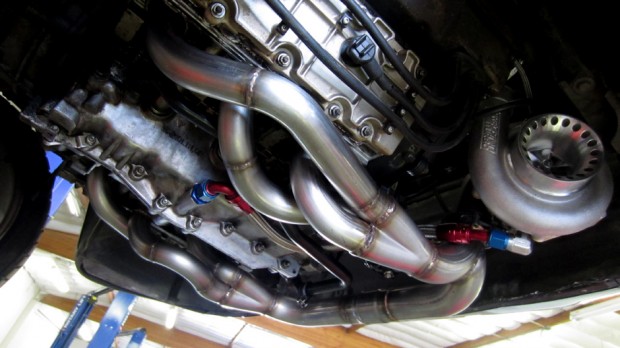 After returning from Japan, I connected with the FFTEC guys in Hayward and told them about my plans and they were stoked. William, Ernesto, Sean and the rest of the team encouraged me on a monster build after going on a ridealong with Mike in Williams 790hp (to the wheels) Evo. Known for their Mitsubishi tuning and creating some of the fastest Evo’s on the planet, and now working on Porsche tuning, the guys at FFTEC took on the motor build. We first talked about building an NA engine but then talks of a twin turbo 3.6 came into play. We pulled back and went with a single turbo with enough horsepower to do well on and off the track. They also gutted the car and stripped it of all sound deadening and welded up a cage to all sanctioning bodies competition. 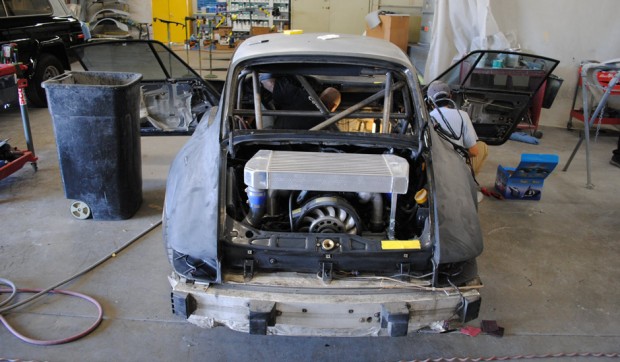 At TNT getting prepped for Paint. 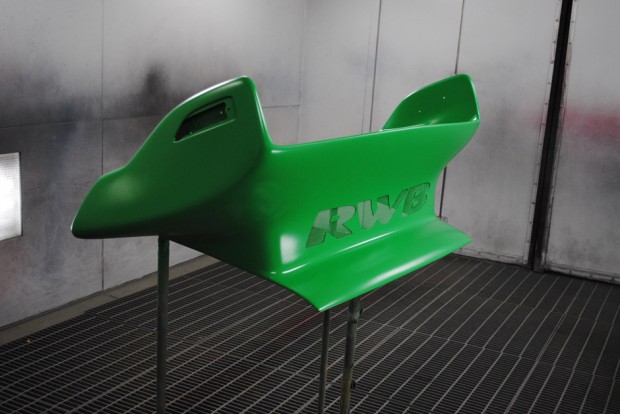 After building the turbo engine, Sean de-tuned the motor and set the rev limiter to 3000 while it went to Tony of TNT Autobody in Sacramento for a color change. After talking to Nakai in Japan, he mentioned that painting the car blue or something bright would be cool. I thought Tiffany colored or a Green would be it and sent TNT a swatch thru Rob and the paint was set. The guys at TNT welded up the sunroof while Tony gloss painted the interior and matte painted the exterior. A few days later it was ready. 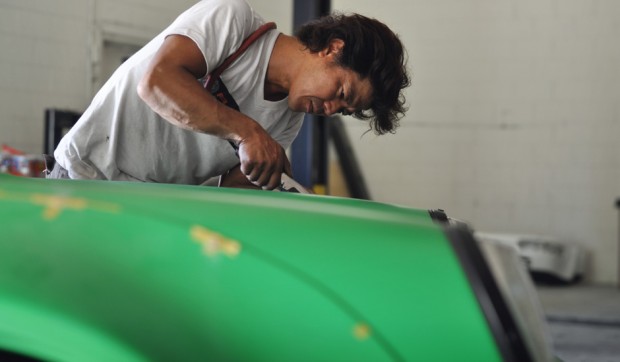 When the car came back, Nakai went to work at his new workspace, RWB USA. He needed plenty of tools and we worked together on getting everything he needed. As we watched him do his work, we noticed how much he work is put into making the car perfect. Everyone that experienced him working was inspired. Watching him set and reset the suspension til it was perfect. 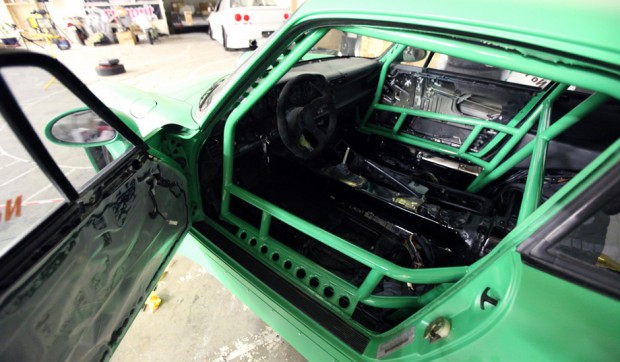 After the bodywork was done, we had about 2 days til the car left for FFTEC for its final tune. Those 2 days I spent re-installing the interior. From the new Recaro’s, RS leather door panels, RS floor panels and pedals, pulling out the old stereo and figuring out if I had enough time to re-install the KW HLS system wiring. I didn’t get to do the HLS til after Sema but the rest I was able to finish with not much time to spare. 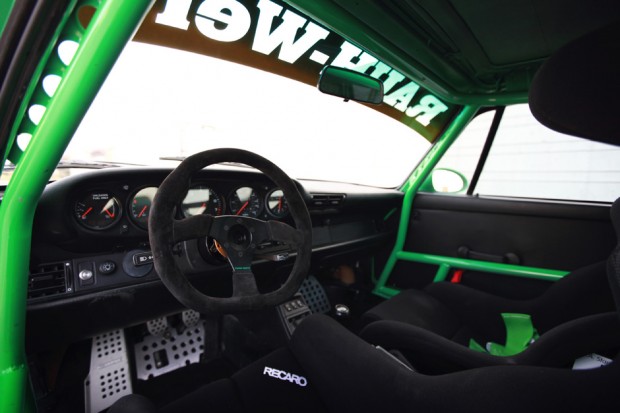 I installed the interior minus the Stack Gauges which are getting installed now. 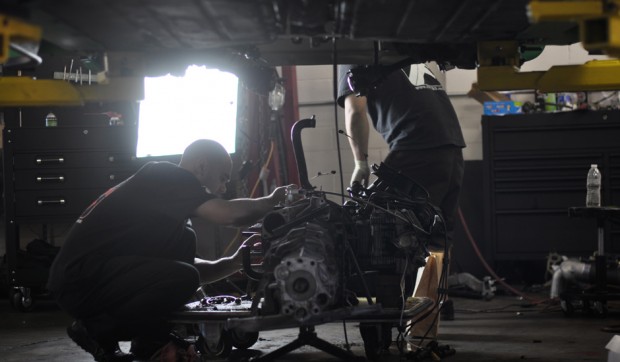 As it went to FFTEC for its tune for Sema, they noticed the oil leak got worse when they opened it up on the dyno. As with many older Porsches, oil leaks are very common and as they were pushing for more power the problem became more prevalent. The 2 options the FFTEC guys had were 1. Do a quick fix, get it to Sema and fix it later or 2. Drop the motor, fix the problem, build it stronger and get it to Sema. With Sema being 4 days away, FFTEC decided to go for option 2. Drop the motor, rebuild and as they knew what the problem was before they even opened up the motor, they verified that cylinder 2 was cracked all the way thru.

With 1 days left before leaving for Sema, the guys at FFTEC worked a miracle and had the car on the Dyno doing 396 to the wheel with about 370 torque on a very low and conservative 6psi boost. We’ll see how much it can do with 15psi in the very near future. So as we had very big intentions of driving it to Las Vegas, we were faced with reality with not knowing how it would do on the long trip as the motor was just rebuilt and the fact that we were asked to make sure it came down in one piece. 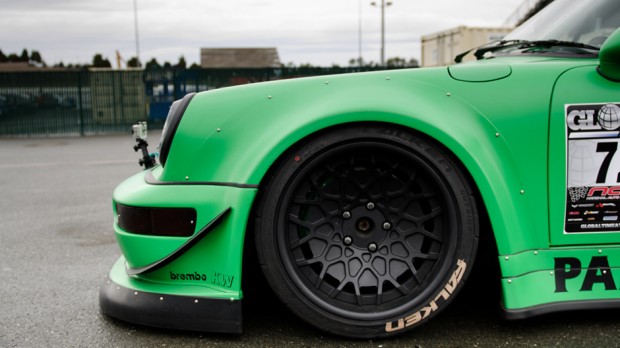 For the wheels, I introduced the guys of RWB to Rotiform and showed them concept drawings of what we had in mind for the car. Nakai was very excited to see the wheels which reminded him of the old school wheels from the past. The RWB x Rotiform 18×10.5 and 18×12.5 not only looked great on the car but worked well on the track. We’ll be modifying the rear cooling of the wheels for consumer use as these were prototypes. 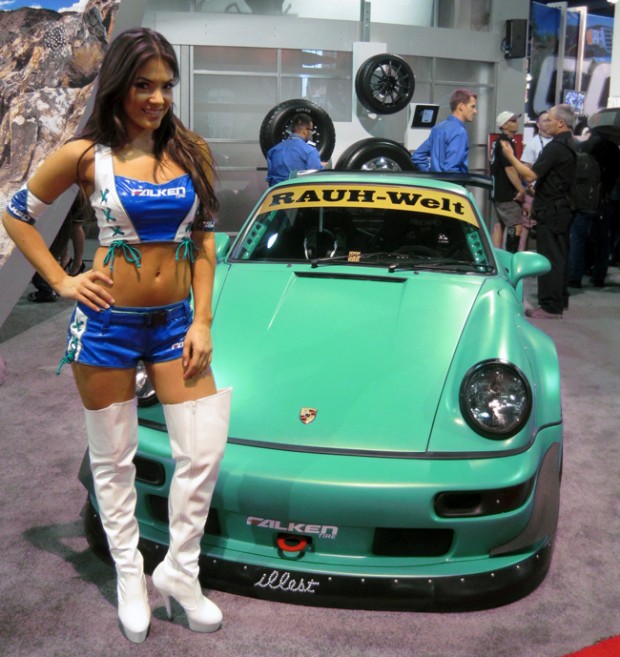 At Sema, the crowds gathered to see an RWB car in the flesh. For the first time, many saw 2 and for some they saw the 3rd RWB 993 rolling around the Las Vegas strip. At the show, lots of people had conversations with Nakai and Toshi and there were lots of interest for RWB. Some of the notable ones that showed interest was Bruce Canepa. Yeah, the guy that hosts Rennsport and owns Canepa. If you haven’t been there, I suggest you do. We did a feature on them a few months back, check it out. Sure RWB is hot right now and although many people say it will pass, im not sure it really will. The lines aren’t like a wings west body kit with ridiculous randomness everywhere. The lines compliment the original shape of a Porsche and has been proven on the track for quite a few years now. 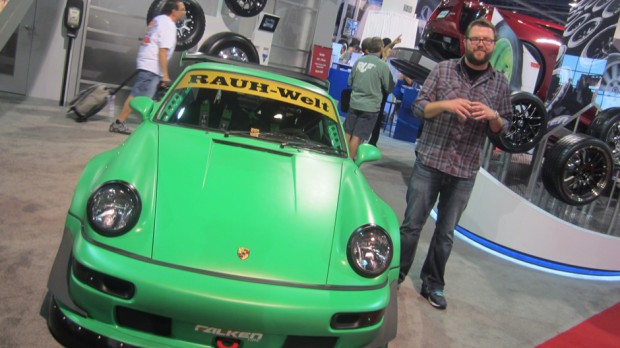 Rutledge Wood also came thru and said hello. He not only co-hosts Top Gear USA but also is the host for a Nascar Show. He picked the RWB as his favorite car of the show. Kinda sweet. Thanks Rutledge. 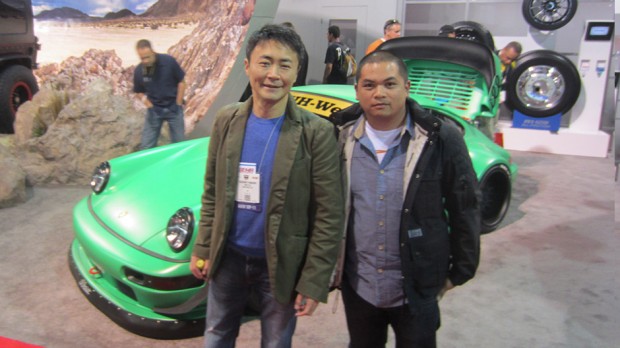 Also found out Pandora One won the European car award for the infamous Gran Turismo Awards. The man himself, Kazunori Yamauchi, was very impressed with the car. It was good meeting him. 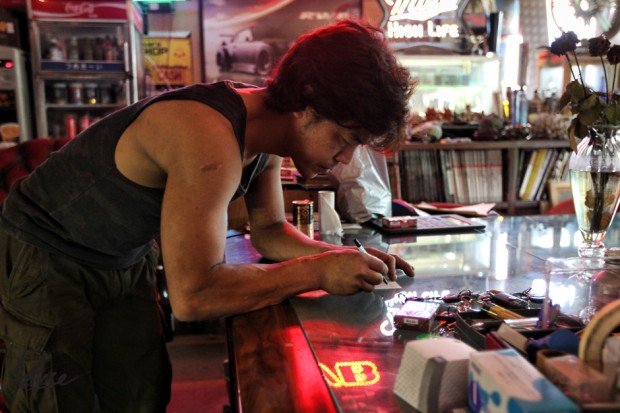 Nakai started RAUH-Welt Begriff as Rough World, his drifting crew and I’ve been very influenced from the entire Japanese drifting scene since receiving my first video from Japan on drifting in 1998. The style Rough World possesses is authentic and something not forced. If you need more insight on Rough World, look here. Anyways, I really got to know Nakai over the past month and a half he’s been living with us and really respect him for keeping his game true to his beliefs. When I showed him the render of the wheels in Chiba for Pandora One, he told Kenta that he knew then and there we could work together on making RWB USA happen. Some people think we’ve exposed his world to the masses but all we’ve done is shared his art and style to the people. 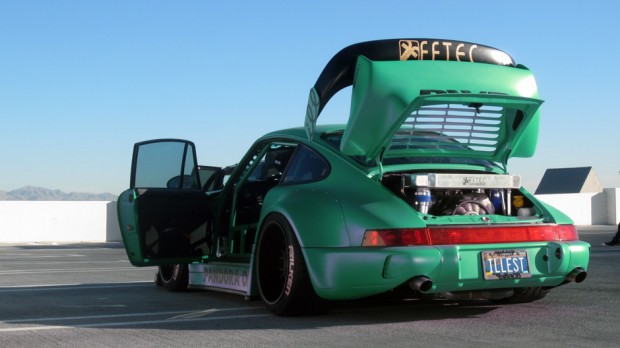 Everything on Pandora One was approved by Nakai-san and to me, that’s all that really matters. 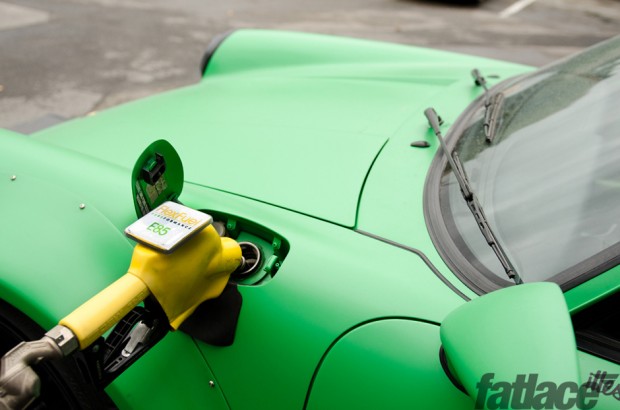 Gassing up. Yes, that’s E85 going into the car. Goes well with the whole “green” thing.

Thanks to Jason and Nad’s from Global Time Attack to invite us to their end of year event at Infineon this past weekend. We took her out for a quickie to get familiar with car. I expect to take it out more and more as track events are more frequent versus drift events so we’ll make sure to bring our cameras out for that. 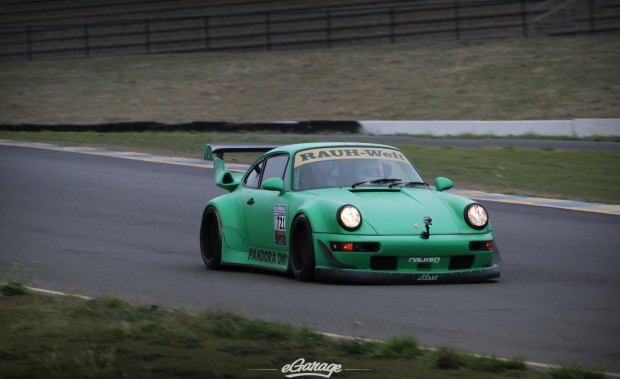 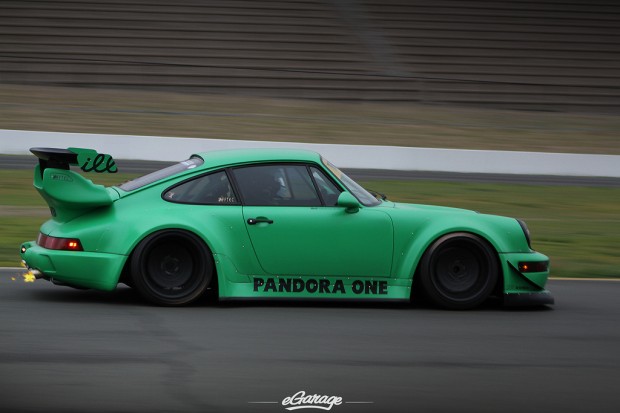 15 thoughts on “RWB Pandora One”