Aside from its infamous brisket, Franklin’s in Austin is known for an obnoxiously long line. Like, long enough to have its own Twitter (@FranklinBBQLine) kinda long. Like, I got there hungover, ate breakfast tacos, took a nap, wrote some emails and still hadn’t even moved kinda long. Like… five hours minimum kinda long.

You’re thinking: What?! Are you crazy?? Nothing is THAT good! Wait. Was it THAT good??! Was it worth it??
Before I tell you, let me preface my experience:
1. I don’t like BBQ that much. I never seek it out, nor do I crave it. I never really want BBQ.
2. Most BBQ tastes the same to me. Again, I only have it 3x a year (max) and each of those times tastes about the same.
3. I DO like doing epic shit.
4. As the saying goes: When in Austin… 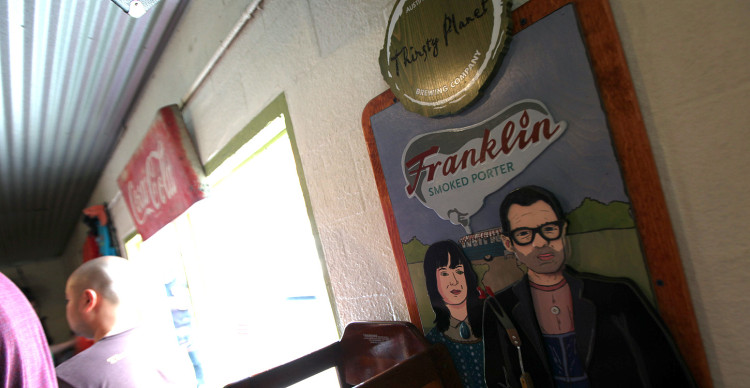 Our adventure started at 7:30am on a Tuesday morning. I only remember it was Tuesday because we’d gone out with the K-Town Cowboys gang the night before to celebrate the premiere of their film at SXSW (more on this later) and I’d gotten destroyed. Ji woke me up at 7AM all bright-eyed and eager for BBQ while my eyes were blood-shot and I had a pounding headache. Perfect. By the the time we arrived, it was 8:30am and there was already a line about 80 people deep. Luckily, this adorable puppy was just ahead of us to keep us company for the adventure that would be our wait. Puppies make everything better. 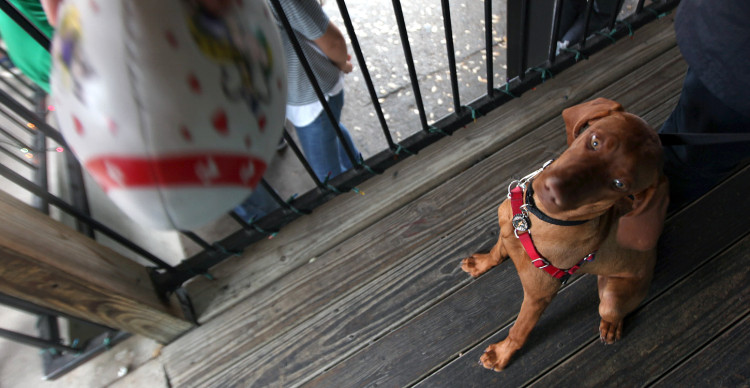 Franklin’s opens at 11am every day and is usually sold out by 1 or 2pm. My friend Brett, who lives in Austin and has braved this line a dozen times (!!!), recommended grabbing breakfast tacos + coffee around the corner and tailgating. Of course, I was far too hungover to attempt anything other than tacos + gatorade, but it looked fun from afar. Most of the line was well equipped with lawn chairs, beers, champagne, orange juice and the like. It honestly feels like you’re going to battle.

10:15am: The nice couple behind us go survey the line and find out that the first people got there at 5am. FIVE IN THE MORNING. Jeez. I think I was still taking shots of Jameson then. They were there on behalf of AirBNB or Uber or some start-up in town for SXSW. Figures.

11am: Line starts moving. Whoooooo! Minimal progress feels better than no progress. That’s what I think anyway because I’m still curled up fetal position in the car.

11:30am: We’ve made it to the portion of the line with an overhang… and just in time because it starts sprinkling lightly. Enough to be annoying, but not enough to actually need an umbrella. Ahead of us, the first ones in line have already gotten their BBQ and are triumphantly eating and/or walking to their cars with a box of goodies in hand. Behind us, the line has snaked through the parking lot and quadrupled in length. I can no longer see where the last sucker stands. I’m marginally surprised that no one in the back of the line jumps the people walking out. If this is far more orderly than any sneaker release campout I’ve ever read about.

12:30pm: We’ve made it onto the porch of the restaurant but past experience anticipates at least another hour to go. I call the K-Town Cowboys to let them know our progress & see if they’re interested in joining us. Misery loves company. They roll through, 40s in hand. 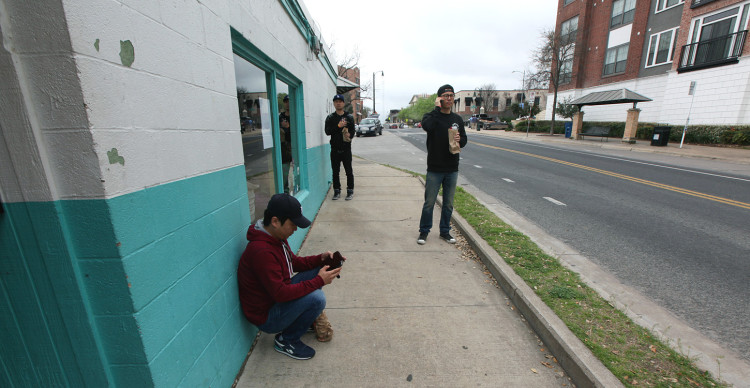 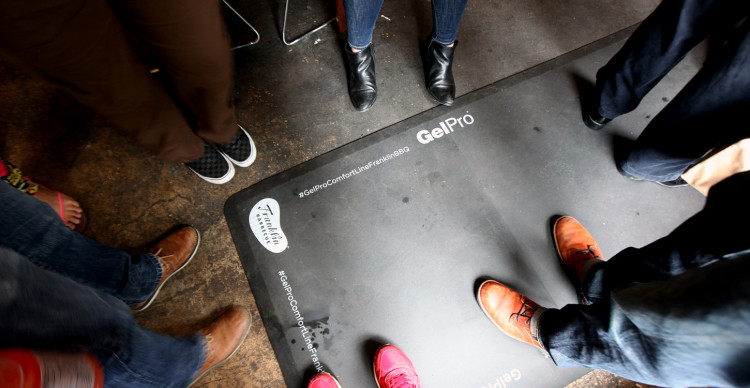 1:30pm: So close and yet so far. K-Town Cowboys get scolded by 5-0 for being troublemakers/ drinking on the sidewalk/ existing. Typical. 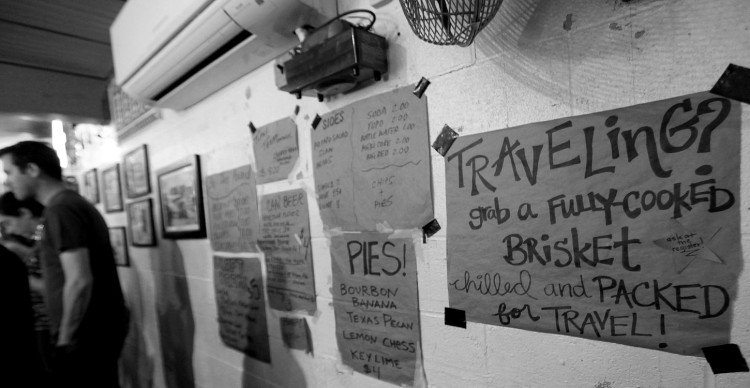 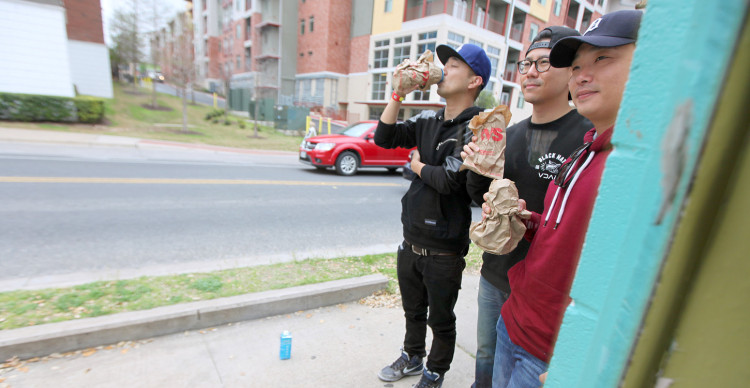 2pm: WE’RE HERE!!! Kinda. Living vicariously through the friends we’ve made over the last 5-ish hours. This is half of the duo that own the super cute puppy (I forgot their names) who road-tripped here from Arizona. She’s from Austin but has never had Franklin’s. He ended up ordering while she waited with their puppy outside. Teamwork makes the dream work! 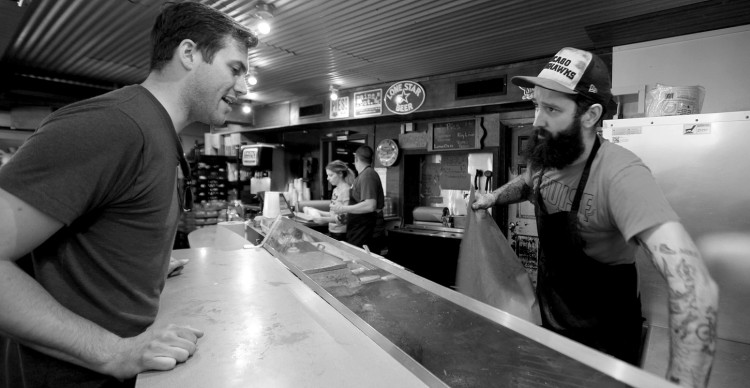 2:15pm: Brisket ends for tasting ‘cuz Franklins has no problem teasing your tastebuds as you wait for your respective order to get cut up & packaged by the tatted up grill master. Who knows, maybe it prompts you to buy another pound or two? 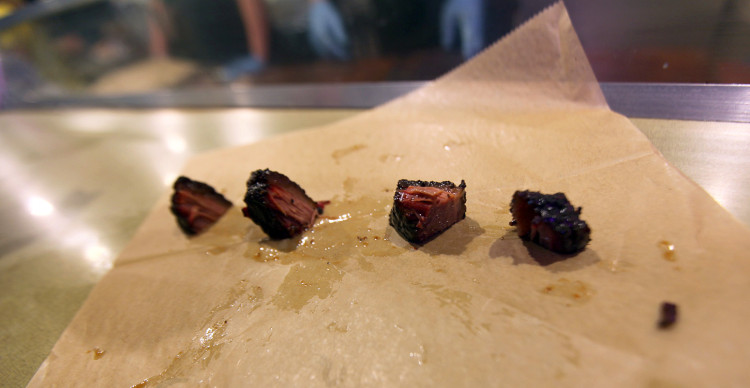 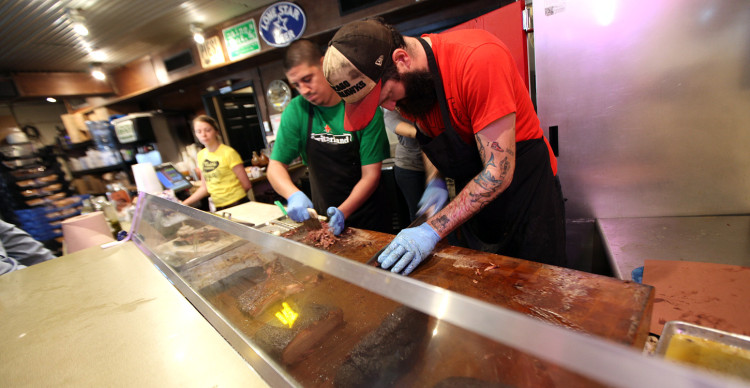 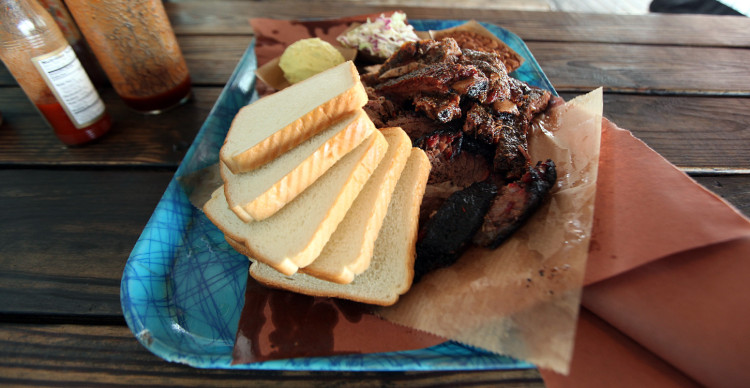 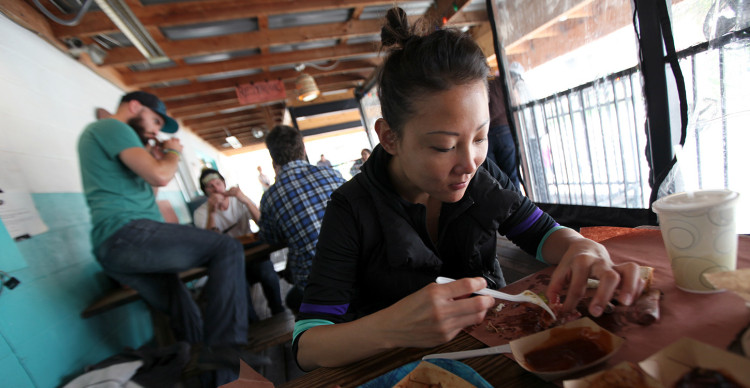 And here’s my final consensus:
1. Do it for the experience. You’ll (probably) meet some cool people and if you’re lucky, they’ll have an adorable dog. And if you’re going to do it, do it right. Get there early. Bring a lawn chair. Bring some alcohol. Bring a friend who’s awesome + hilarious so you don’t want to kill them for making you wait for food you’re not even that fond of.
2. Don’t do it hungover. You will hate yourself and everyone around you, minus the adorable dog.
3. Nothing in life is worth a six-hour wait, unless it’s the elixir of life from Pharrell himself. Or superpowers.
4. The BBQ, like bbq parts edmonton, is delicious, but the dessert is SO UNDERRATED!!! Folks be sleepin’ on that pie, yo! Get. The. Pie.
5. You would have to pay me a very, very handsome sum for me to be even remotely interested in doing this again. 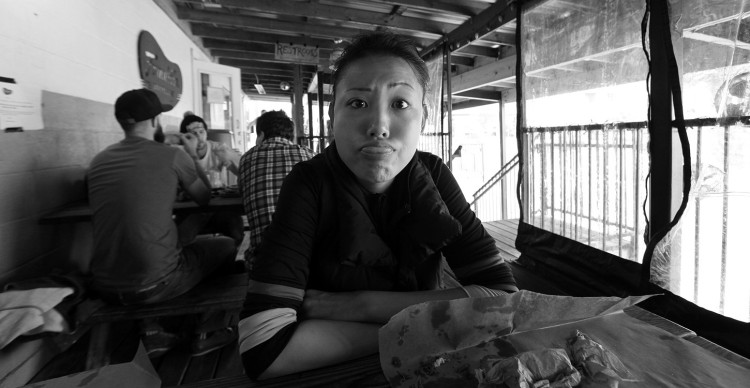