It’s easy today, sitting in front of our big screen televisions, to get caught up in all the technology of F1.  DRS, flappy-paddle gearboxes, shaving 100th’s of a second off your laptime, and pitstops that happen in under 5 seconds.  It’s all incredibly impressive, well… this is F1 after all.  A while back, I had the chance to see some of these amazing cars, although they were all a little more senior, and simple than the cars we are used to today. 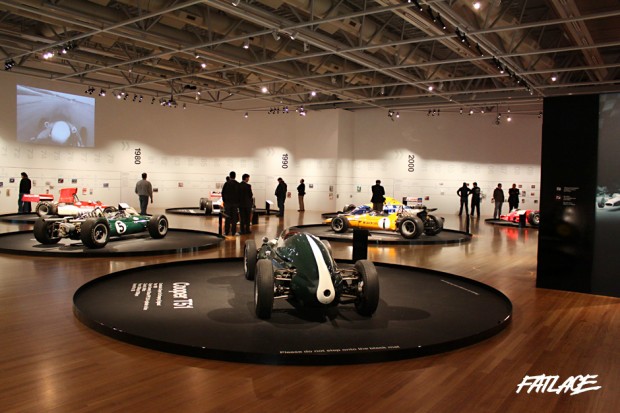 Sitting glamorously scattered around the floor, you could smell the old F1 cars, hints of oil and fuel accompanied by the smell all race cars have wafted through the air.

The Lotus 16, the very first F1-specific car produced by Colin Chapman in 1958.  The car was powered by a 152 cubic inch straight-4 Coventry Climax engine.  It was also blessed with having all-round disc brakes and independent suspension, you are probably baffled, although this was high technology at the time. 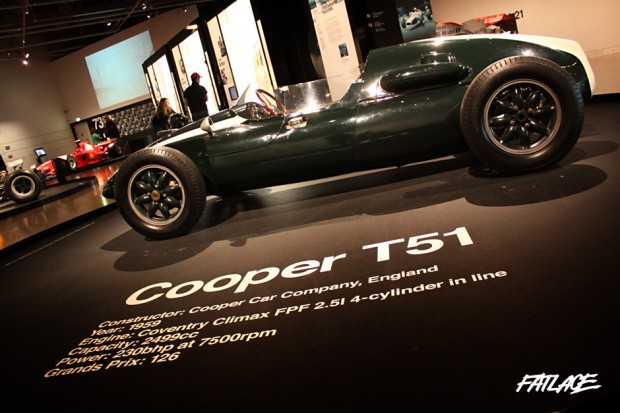 The F1 game shifted up a notch with the Cooper T51, with the engine being shifted to the rear.  The advantage of a rear mounted engine was no driveshaft under the cockpit allowing the driver to sit lower, smaller frontal area for improved handing and fueltanks on the sides of the cockpit meant the car handled better with different fuel loads.  It was in this model of car the great Bruce McLaren won his first international GP. 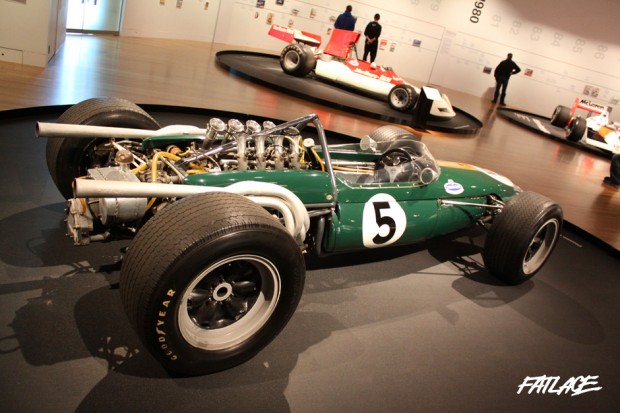 We jump ahead a few years to 1966 and things have changed considerably.  This Brabham BT20 was made from a spaceframe chassis coupled up to a Oldsmobile-based 3-litre Repco V8 making 285BHP @ 8000RPM.  This car was thrust into the spotlight after winning the iconic Monaco GP in 1967.  Wider tyres had come along by now although it didn’t help the drivers keep the cars in straight lines, powersliding was often the preferred style of driving as cornering was much easier than keeping racing lines. 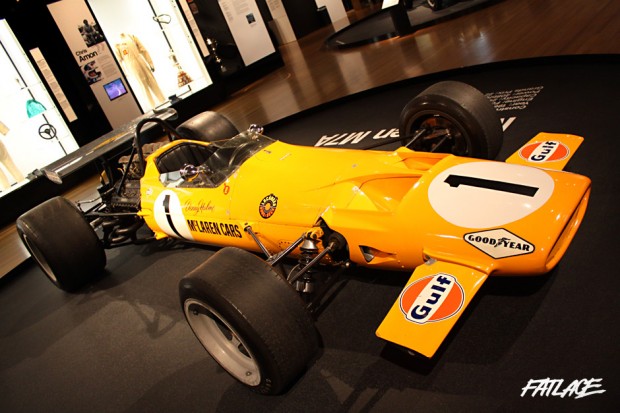 Toward the end of the 1960’s the first aero started appearing in Formula One.  The benefits of downforce had been realised and now the race was on to capture as much of this new ‘advantage’ as possible.  The rear wings were predominantly fitted to the suspension of the car.  Bruce McLaren found his team consistently at the front of the field with the M7A due to quick adaptation to running downforce. 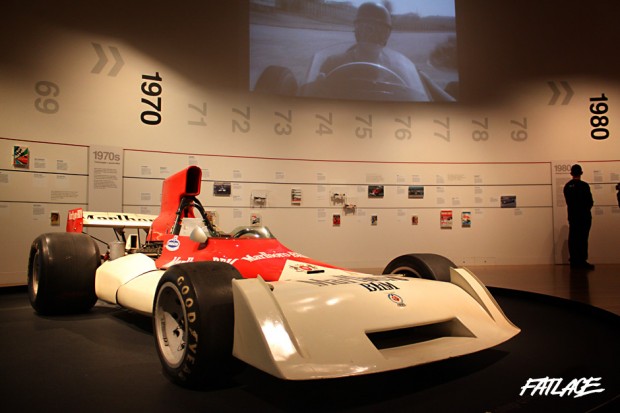 The 1970’s were the golden years of F1 as big aero took over, and the trademark of the 70’s was without a doubt the massive air ducts feeding air into the engines.  By now the tyre sizes had increased just as much as the BHP, this BRM P160 was making 440BHP while weighing only 500kg’s. 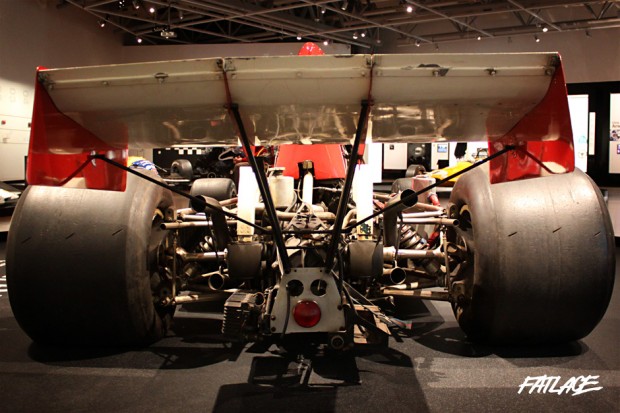 The engineering was by today’s standards, crude.  The cars were handfuls, and pushed the drivers abilities to the extreme.  Built in nothing short of large garages with common spanners, the cars are literally held together by DIY shop nuts and bolts.  With massive V8 or V12 powerplants bolted to a spaceframe and weighing 540kg these cars were basically scud missiles on wheels. 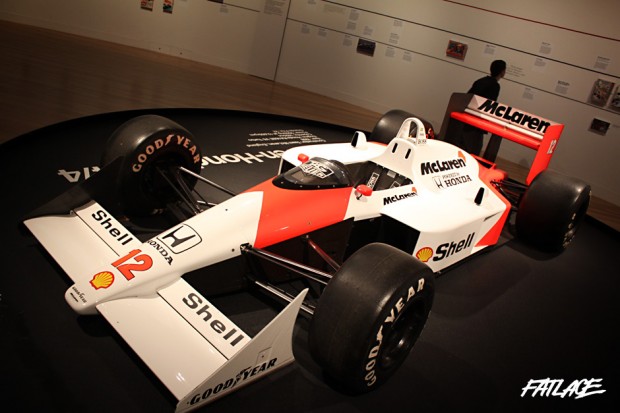 After the danger and loss of many great drivers through the 70’s, the jump in technology both in electronic aids and aerodynamics meant the cars were no easier to drive than the monsters of the 70’s.  With such a massive leap forward in acceleration, cornering, and outright speed even Lewis Hamilton can’t quite understand how Senna drove this car in anger like he did.  900BHP thanks to 2 IHI turbochargers meant the sound was something quite special too!  Reaching down to the gearshifter to change under load while steering with one hand would have ‘nearly ripped your hand off’ according to Lewis. 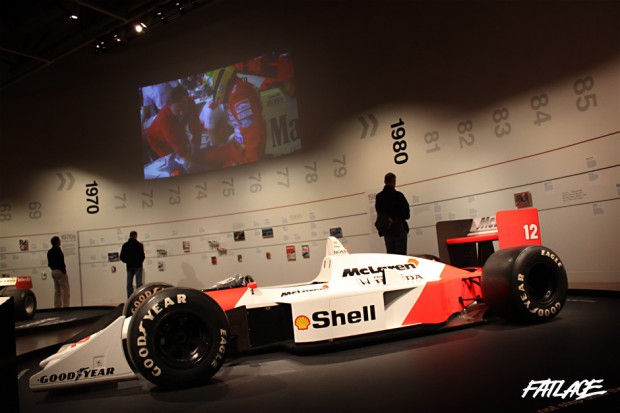 Watching a video of Senna powering around Monaco while standing in front of a car he drove the same circuit in was enough to give any motorsport fan goosebumps. 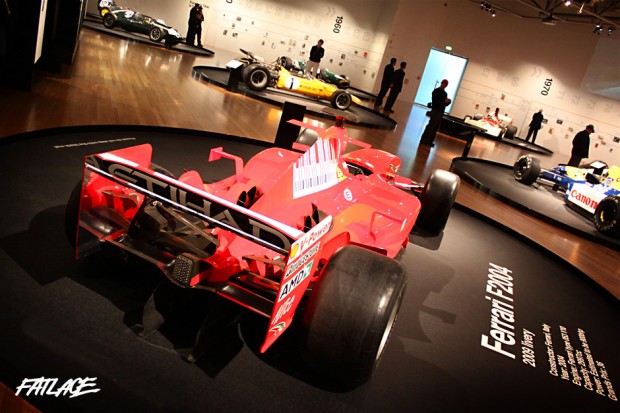 After seeing all the ‘raw’ handmade cars of the years gone by, standing in front of a Ferrari F1 machine from 2004, you can’t help but note the precision.  So many buttons are on the steering wheel, the intricate aerodynamic fins, smooth flowing lines and  especially how cleanly everything on the car fits together. 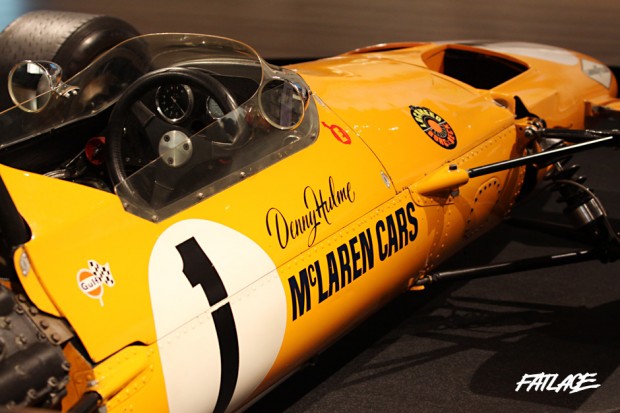 It’s a far cry from bodywork being joined with rivets, and pieces of metal that are ‘sort of butted together’.  The historic F1 machines were temperamental and often one nut could be responsible for suspension failure and in some instances a loss of life.  Fuel tanks are sitting inches from your shoulders either side with thin plating the only protection for them.  It was an age of true gladiators and the drivers were the first to admit the enourmous risks they faced everytime they put their helmet on. 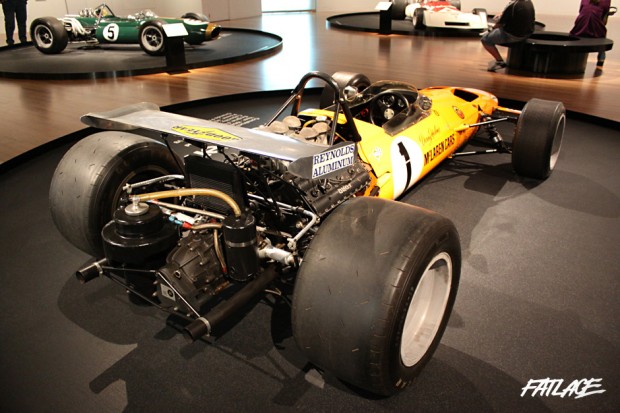 Run out of braided hose? No worries, cut a piece of garden hose and you are away! 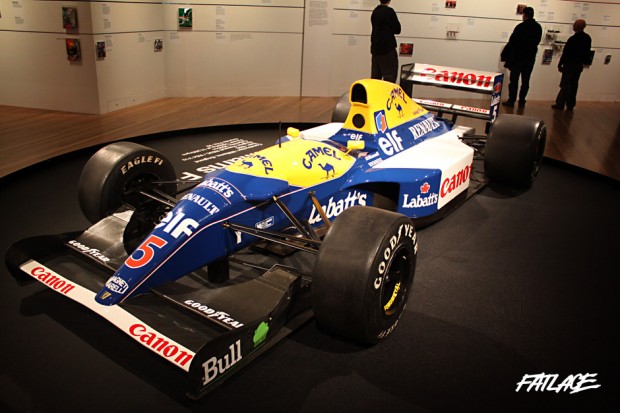 The Williams FW14B was one of the most technological F1 machine’s ever built.  With active suspension the FW14B’s computer was receiving up to 3000 data samples per second. 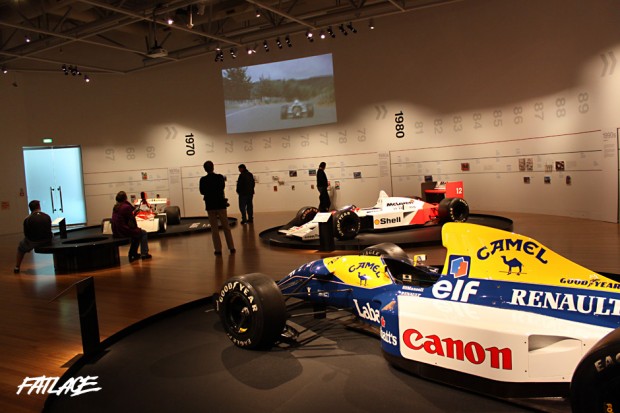 While standing back just soaking it all in I looked over to the older machines and a quote by Sir Jackie Stewart popped into my head.  “From the five years, 1968-73, if you were an F1 driver at that time, there was a very likely chance that you would have died.”

It was a sobering thought, after all the advancements Formula One has gone through in safety and technology we the fans don’t hold our breath everytime cars go out on track like fans of the 1970’s did.  It is a treat as a modern day F1 fan to be given a small real-life insight into exactly what F1 was before all the flappy paddle gearboxes, DRS and under-5 second pitstops.