Chad shares with us this inspiring interview with East3. Learn from one of the best about culture, history and creativity.

Where are you from?
Born in the Bay (SF) & raised in Honolulu, HI.

How did you obtain the name EAST3?
My writing name, ‘East (inspired by Asians coming from the Eastern Hemisphere),’ was created to assist in bringing much deserved recognition to the Asians involved in Hip Hop. Respectfully, the number ‘3′ is a dedication and remembrance to a high school friend & fellow crew member (R.I.P. Triad3 T3 = EAS T3).

How long have you been Writing/painting?
Started at the age of 14. I was already an artist but when I saw a book called “Hip Hop” by Steven Hagar, I got open to Writing because of the “Style Evolution” that Legendary “Phase2” had illustrated. He broke down his entire evolutions from the simplistic vibe to the wildstyle. After that it was on!

What inspires you?
Being a student of Writing (Aerosol Art)& Hip Hop keeps me constantly motivated. Also, Reading Kemetic books, other elements within Hip Hop & My global fams keeps me pushin too.

Is there a particular song or genre of music that really gets you hyped to go paint. A song that you may hear, that wants you to just go out and crush?
Im feeling E-40, Mac Dre, Too Short, Nump, Federation, RR…Bay (mobb music not jerkin music), Gangstarr, Nas, Immortal Technique, Gold Chain Military list goes on….

Who have you worked with that has helped provide you with further direction and influence?
Along with Phase2, other pioneers who mentored & influenced my grounded traditional foundations as a writer include Deno TC5 (RIP), Mr. Wiggles, King Scotty, King Zen (R.I.P.), Frosty Freeze (R.I.P.) & Syze One. The opportunity to work with such legends taught myself the importance of learning all Hip Hop culture & history, & keeping it alive for future generations.

If you had the opportunity to paint with any Aerosol art Legend, who would it be and why? If you did, how would you flip your style to compliment that Legend?
My dream has already come true…I got to rock one with my mentor and close family “PHASE2” in 1993 but if I had to choose another great I definitely would’ve wanted to do a huge Wild Style with “Mike Dream” R.I.P.

Beyond the art of Writing, are there any other branches of art you are expanding into?
I’m really just staying within Writing but I have done it deep in the clothing game as well…it in the bloodline for me.

Did you ever imagine that Aerosol art would provide you these many avenues?
I’ve been blessed to have opportunities within the Urban/Fashion/Toy/Music industries. It’s allowed me to expand my audience and it hella humbling to hear positive and constructive feedback. Thru Hip Hop and Writing I been allowed to give back to my community thru donating murals and building with the youth to be creative vs. self destructive. I also had the privilege to work with positive businesses on Oahu (HI) such as Freelance Brand http://www.freelanceclothingworldwide.com who consistently inspires a positive lifestyle for our youth.

How do you feel about the progression of Aerosol culture?
Thanks to the refinement of our medium, whereas (in the 80’s & til late 90’s) Writers were limited to the amount of colors, high pressured cans and quality of our spray paint. I think that Writing has developed to a level where anything is possible to execute on the wall, however painting “anything” DOES NOT make you a WRITER. The passion to create an ORIGINAL LETTERS/STYLE, Handstyles (TAG) and how it connects defines the difference between a muralist, street artist & a Writer using a spraycan. Cats that use the medium and paint murals containing only characters & backgrounds (with no Letters) are muralist or street artist (lowbrow art community) using a spraycan NOT to be confused with a Writer with a Hip Hop background and credentials. 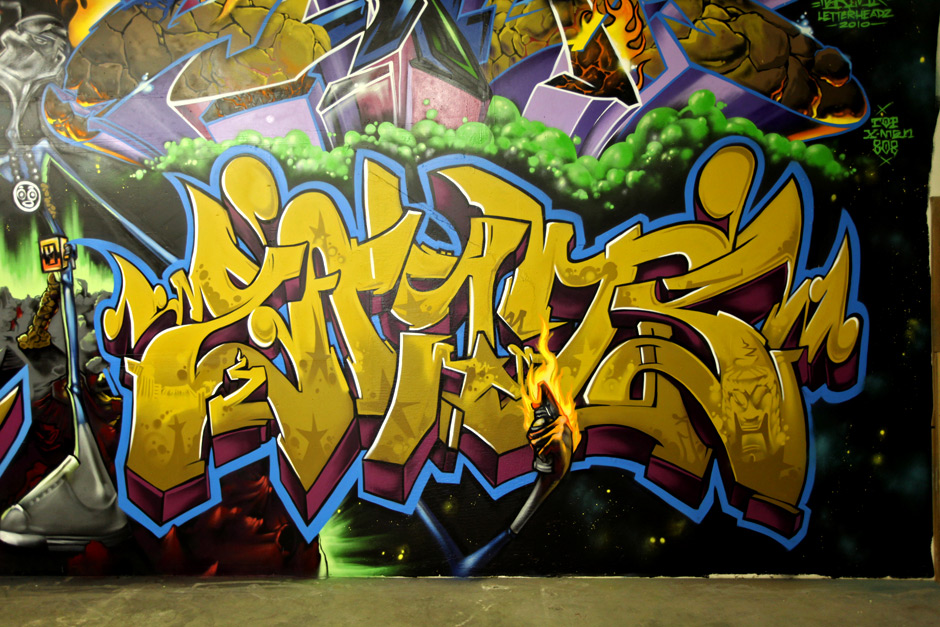 Are there any current projects we should be aware of?
The WAIL PROJECT is an acronym for When Art Imitates Life, a Los Angeles-based company focused on creating fine art with musical visionaries and Aerosol artist East3 at the helm of the creative. Founded by MTV personality Sway and veteran Wake Up Show deejay and hiphop statesman Tech, WAIL is canonizing a selection of contemporary musical icons through the creation and release of highly limited fine art pieces. WAIL is a joint venture with Scene Four, the notorious creativity house responsible for art, conceptual and design for the likes of Nine Inch Nails, HELMET, Marilyn Manson and Beck. Check it out http://www.whenartimitateslife.com Gook lookin out Dj Qbert, King Tech, Sway, Scene Four and all the staff from the W.A.I.L. Project for all the love y’all have shown me. Good people doing good things!

If you could give one piece of advice to the younger generation of Writers, what would it be?
If you are going to be a Writer please understand this is a Culture Based Art form. Learn about Writing and Hip Hop culture (historical & ethical) and respect the knowledge obtained from research because its just as important as the element(s) you practice. Know the “WHY” you are a part of the movement vs just going thru the motions. If you haven’t noticed, I do not call this art form the “g” word. Within Aerosol art NYC history (where it all started) Writers NEVER initially called the art form “g”, they called it Writing. NYC media & Mayor Koch relabeled the art form to “g” to place a destructive and criminal connotation to the art just as they relabeled Bboy’n or Goin Off to commercialize break dancing. Since then, Bboys have reclaimed their cultural label thru persistence and time…it time for Writers to do the same (Writing movement is separate from taggers & bombers movement). Please research “Phase2” because he is the primary Aerosol Writer that fathered the styles of many of the “popular” 80’s Writers who are currently established in the Fashion/Toy/Urban/Lowbrow markets. Phase2 and other pioneering Writers in Mid 70’s help developed the “Bible” for Writing and as the founders of this art form we should ALL RESPECT what was layed down BEFORE we got involved. Calling it “g” is as bad as coming to Hawaii and learning about Hawaiian Culture and then goin back to where you came from and misrepresenting & relabeling the cultural elements. Hip Hop and Writing are a part of a Cultural movement and not a trend or fad!

Any special shout outs or people you would like to thank?
The Annunakis (that guide & watch over me), Phase2, Afrika Bambaataa, Syze One (HI), Ran, Fever One, Lem, Bay Area & NYC and global famz. 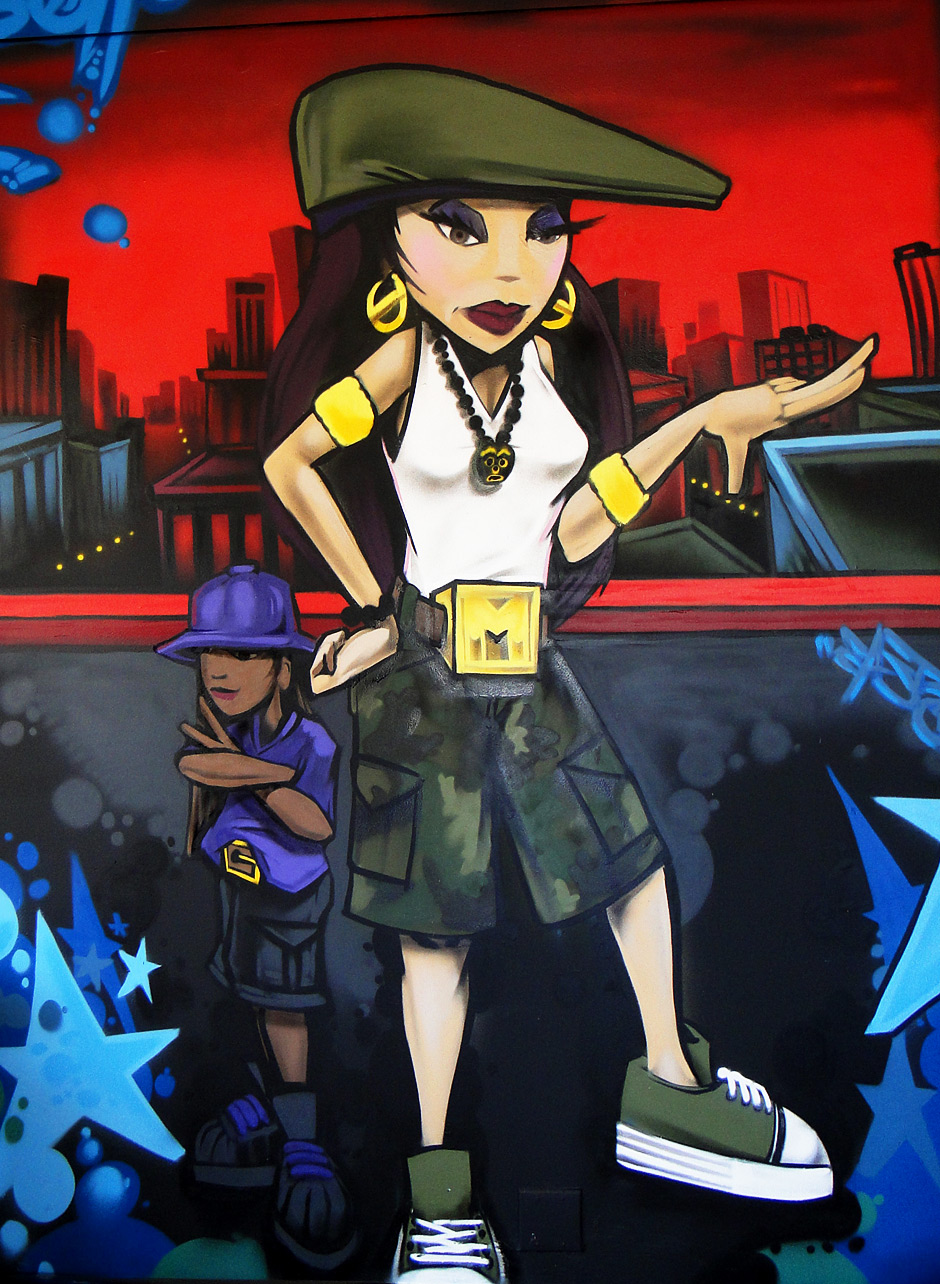 Thanks East3 and Chad!