There must be countless ways in modifying a car in Japan. Hailed by some as the place with “unlimited” access to all types of parts, Japan has been the mecca of car modification for the last 30 years. For my final post about the recently concluded show, Offset Kings Okayama, I will be concentrating on the different styling techniques seen during the event.

From “traditional” JDM to classics, to Europeans, OKJP is the place where all types of cars convene. Now for the best part: learning straight from the owners about the different approaches in car customization.

It’s been a week since I last published an article here on Hellaflush, so here it is. 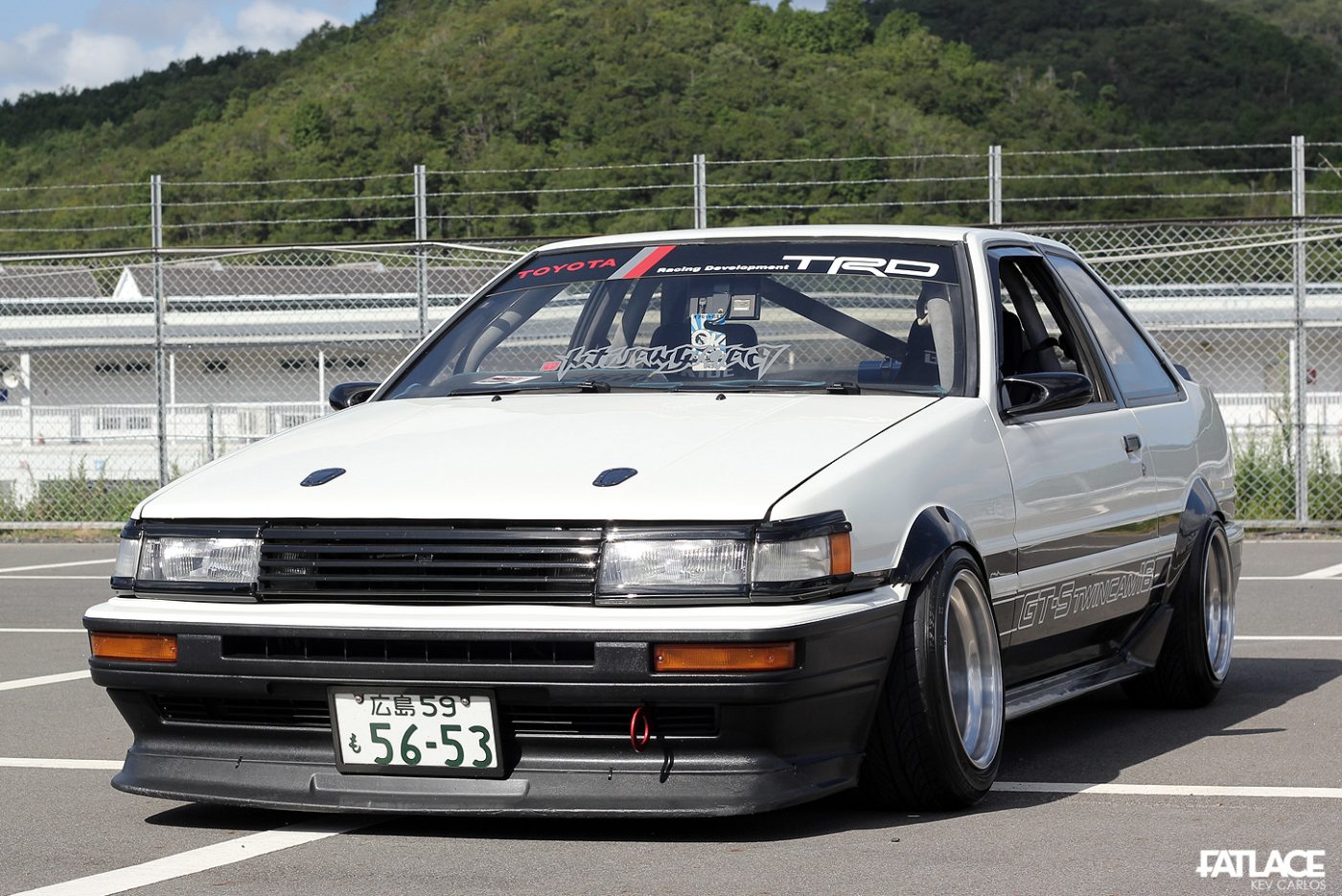 Japan is synonymous with classics. Finding parts is Japan for these cars is a challenge as I’ve been asked a couple of times on acquiring parts for some of the builds here in Manila. Yes, Japan has more parts and more shops, but mostly these are found in remote locations carrying a deep price tag – especially the wheels.

Let’s start off the coverage with Sato Hirokazu‘s Levin. With numerous styling changes for the last 16 years, including a Levin front facia swap, the car was one of the crowd favorites during the show. Hirokazu-San, a member of Team Bad Quality, often uses his AE for touge events and shows. 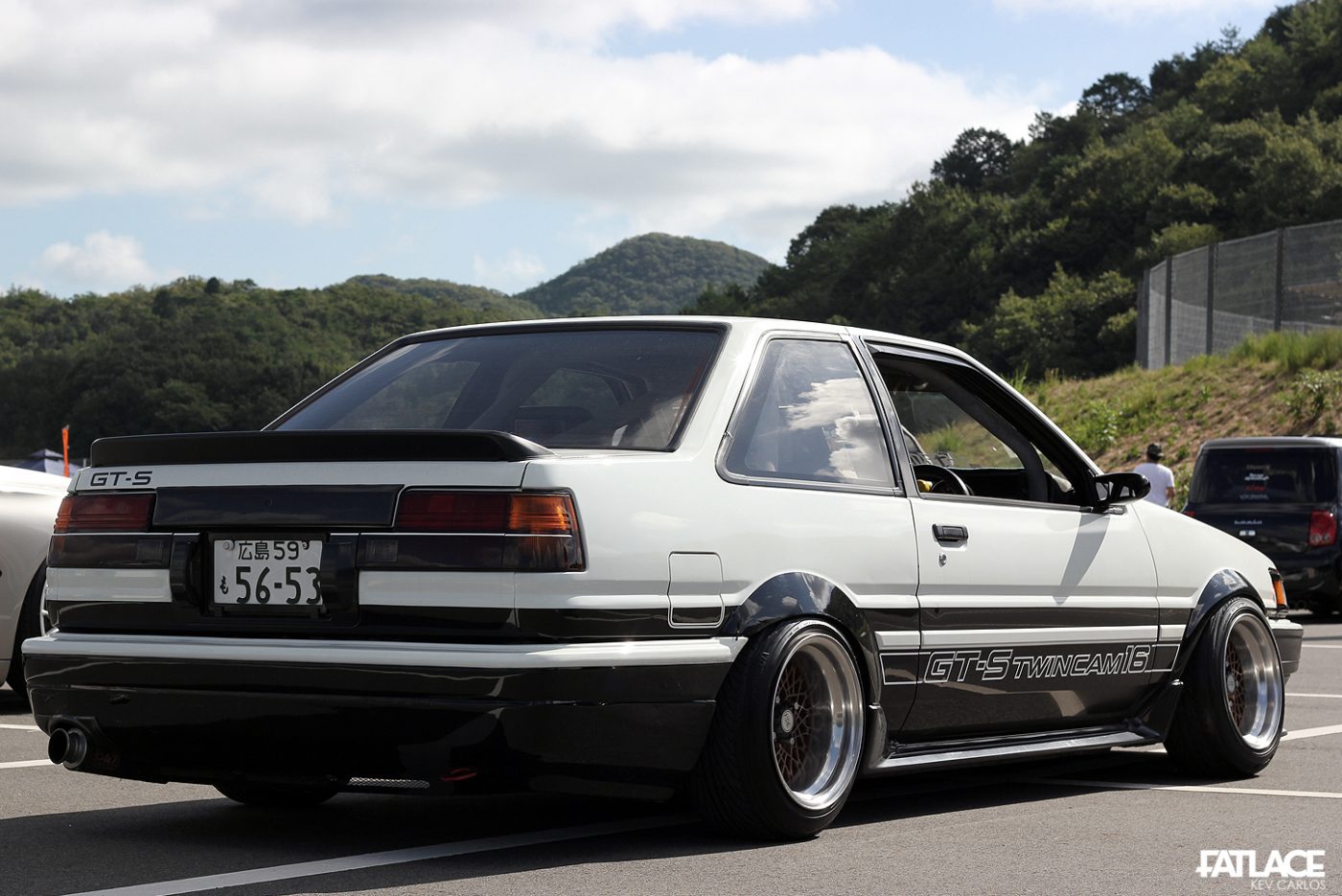 Being in the game for more than one decade, Hirokazu-San’s AE86 has been seen using different sets of wheels. For OKJP, a fresh set of SSR Formula Mesh measuring 15 x 8 up front and 15 x 9 on the rear were used. Suspension work on the car is lead by the GT-WORKS Coilovers 8kg (F) 6kg (R), plus CUSCO Upper Mounts, GX71 Stabilizer, and GT-V Stabilizer/Angle Correction Links. 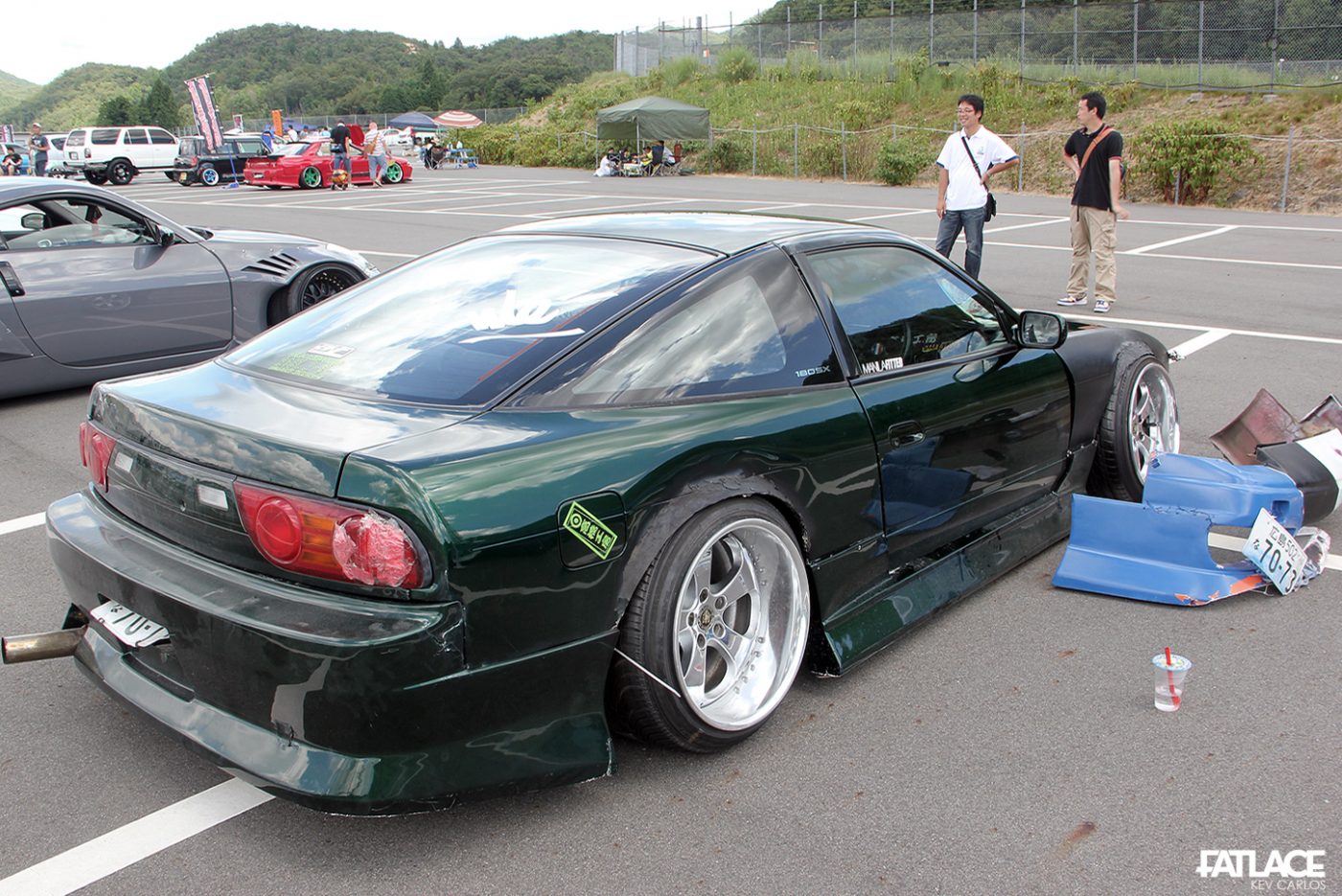 Drift style is very broad. But personally, the grassroots builds usually stands out during these types of events.

Whether held in Okayama or Fuji, the guys from Bad Quality Hiroshima are always in full support during Offset Kings shows. Since 2013, Nakagawa Shuichi‘s blue and yellow RPS13 took the top awards for three straight events. Taking a break in debuting a car at OK Okayama, Nakagawa-San promises to be back as he is cooking something up for SEMA 2016. Trust me it’s going to be crazy – take my word for it. Hiroki-San, the owner of this drift RPS13 established its own character with the battle scars. Driven at this height from Hiroshima to Okayama for more than 3 hours must be a challenge. Thanks for representing Manila Fitted! 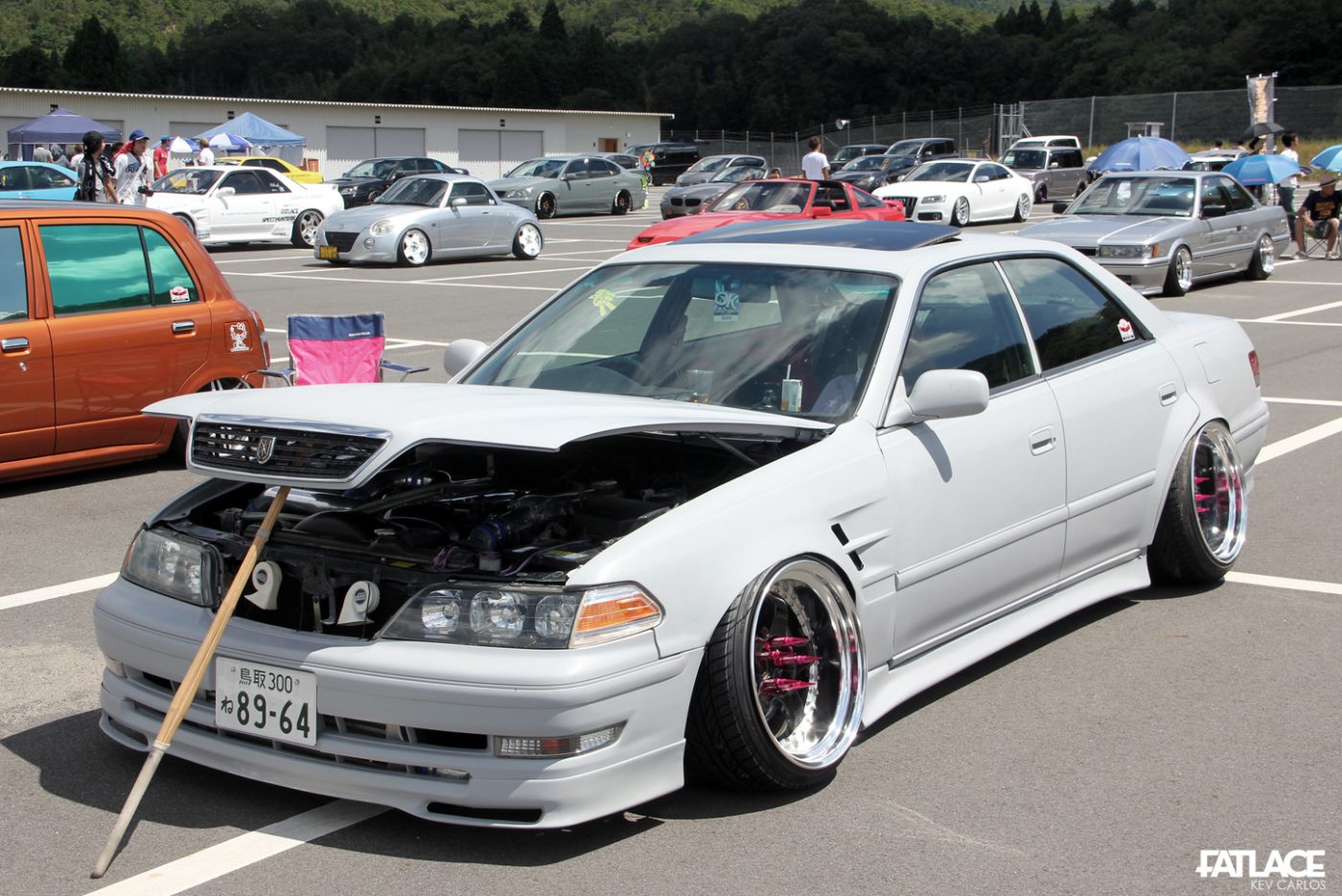 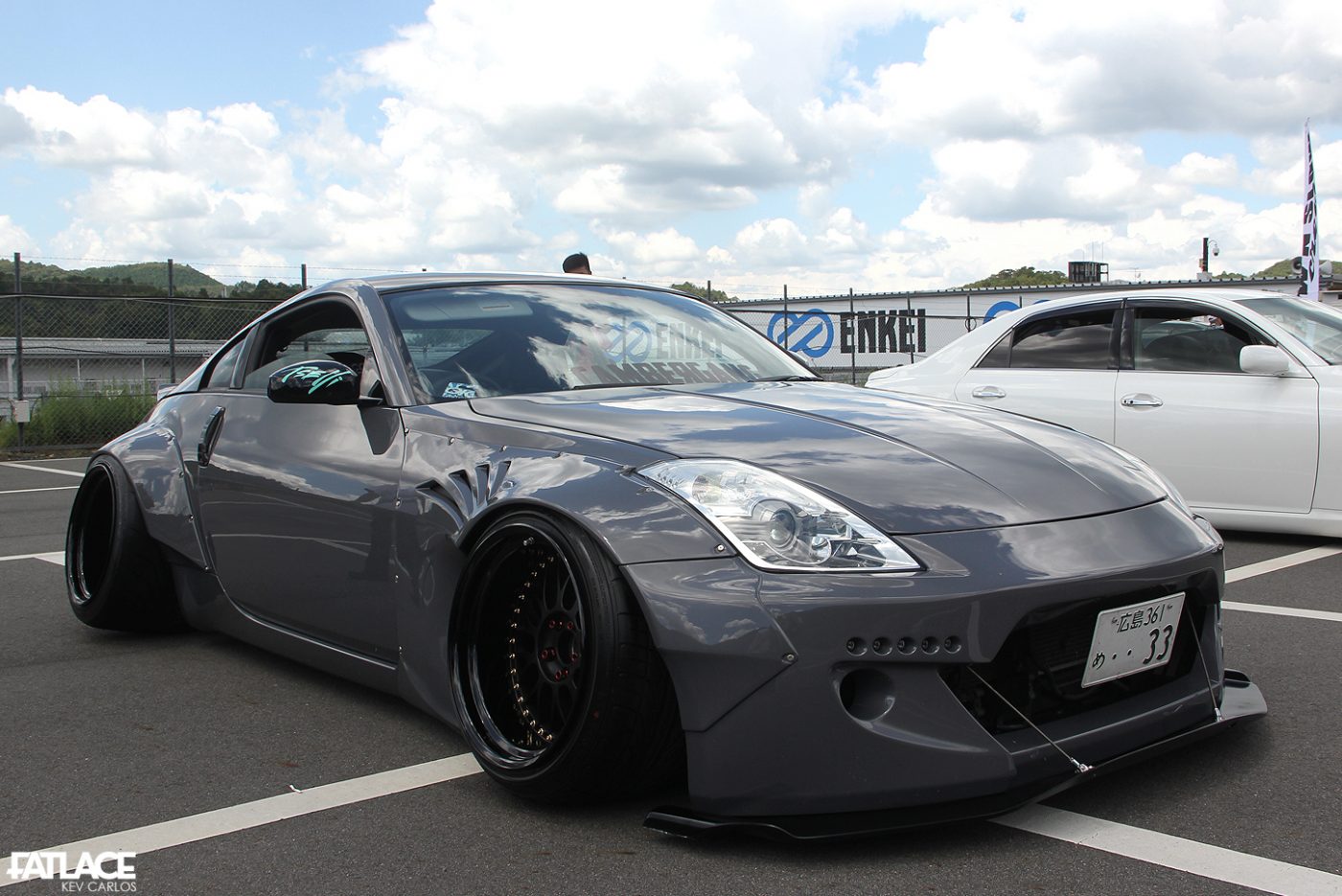 Love it or hate, its here to stay, and Japan keeps on pushing the boundaries in this category.

One good thing about travelling at least once a year during the shows is the people you get to interact with, as learning something new never stops. I met Yoshihiro Hayase, the owner of this Rocket Bunny Z33, which happens to have the craziest wheel specs I’ve ever encountered: Work Wheels Meister M1 18 x 12.5 -8 up front and 18 x  14.5 -97 on the rear. Several parts were needed to achieve this fitment on all four corners, some of the parts are: a Moon Face upper arm kit, a Drift Max Super Angle Kit, Megan Racing rear toe arms, traction rod and lower control arms. Note that this car is running on 326 Power Coilovers with a spring rate of 50kg up front and 80kg on the rear. 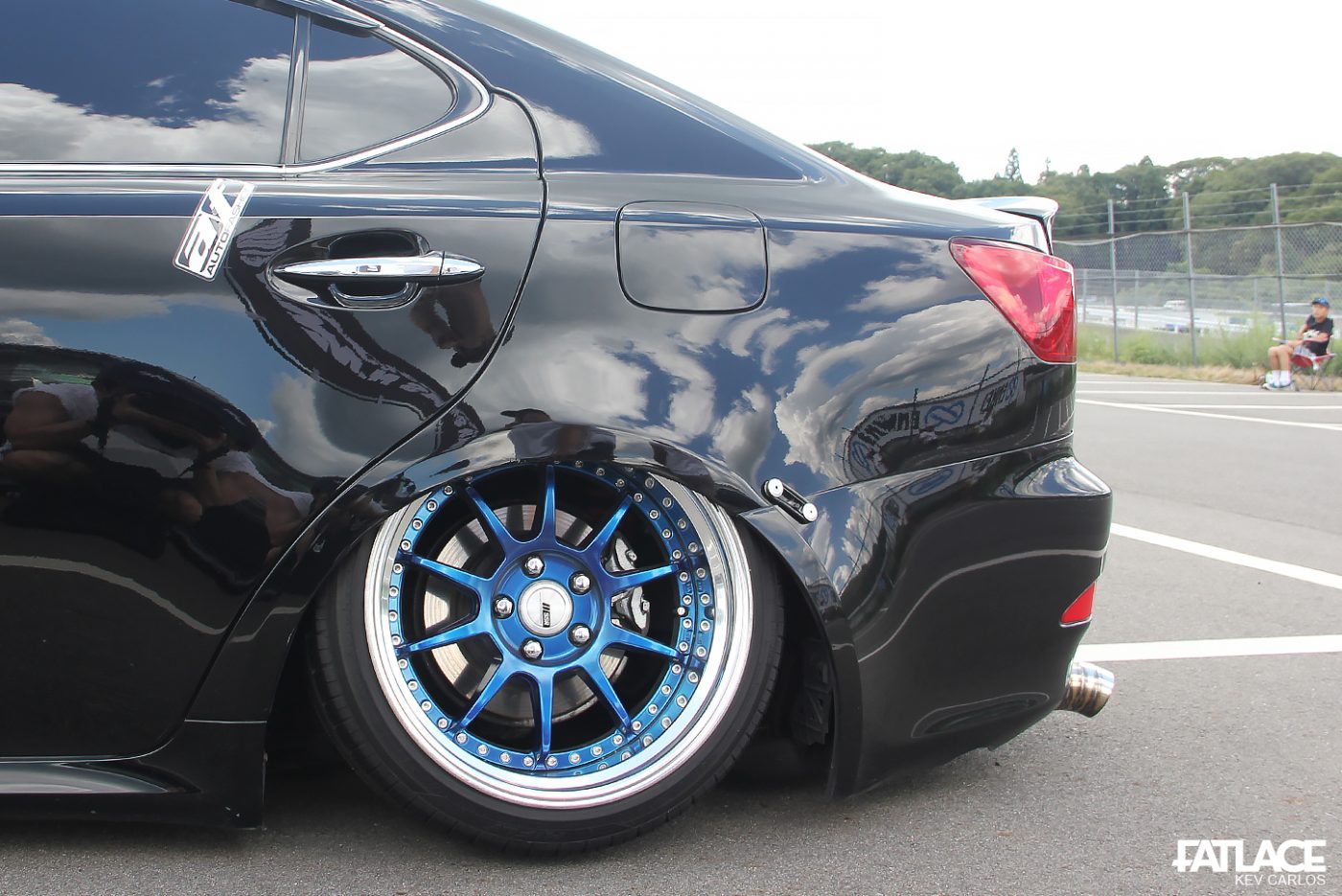 For the longest time during the show we thought that Takuya Miyashita‘s XE20 IS was on bags. The car tucked the 18 x 10 -7  SSR SP3 wheels on coilovers. Japan is always synonymous with the craziest builds… 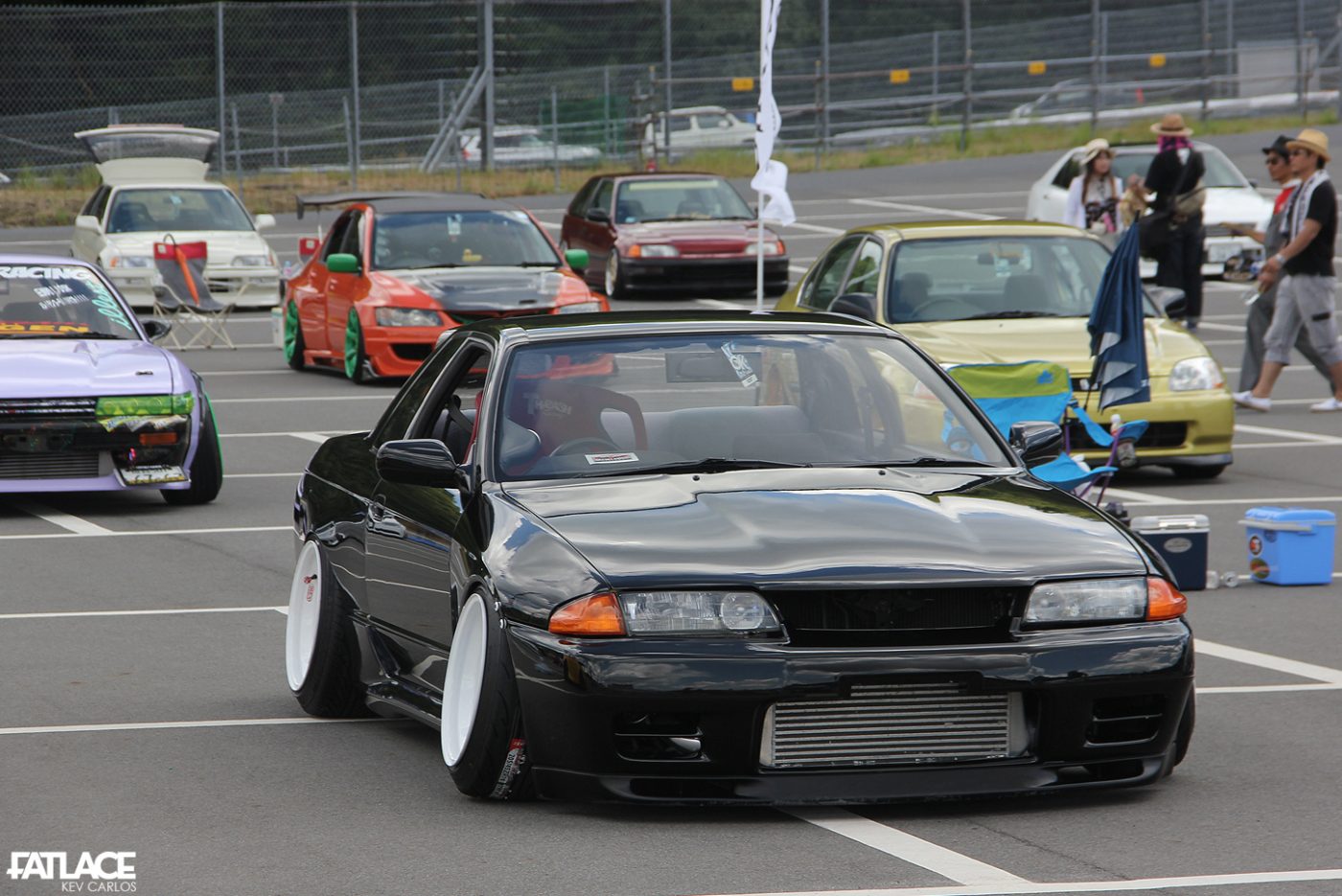 And builds outside of the box.. 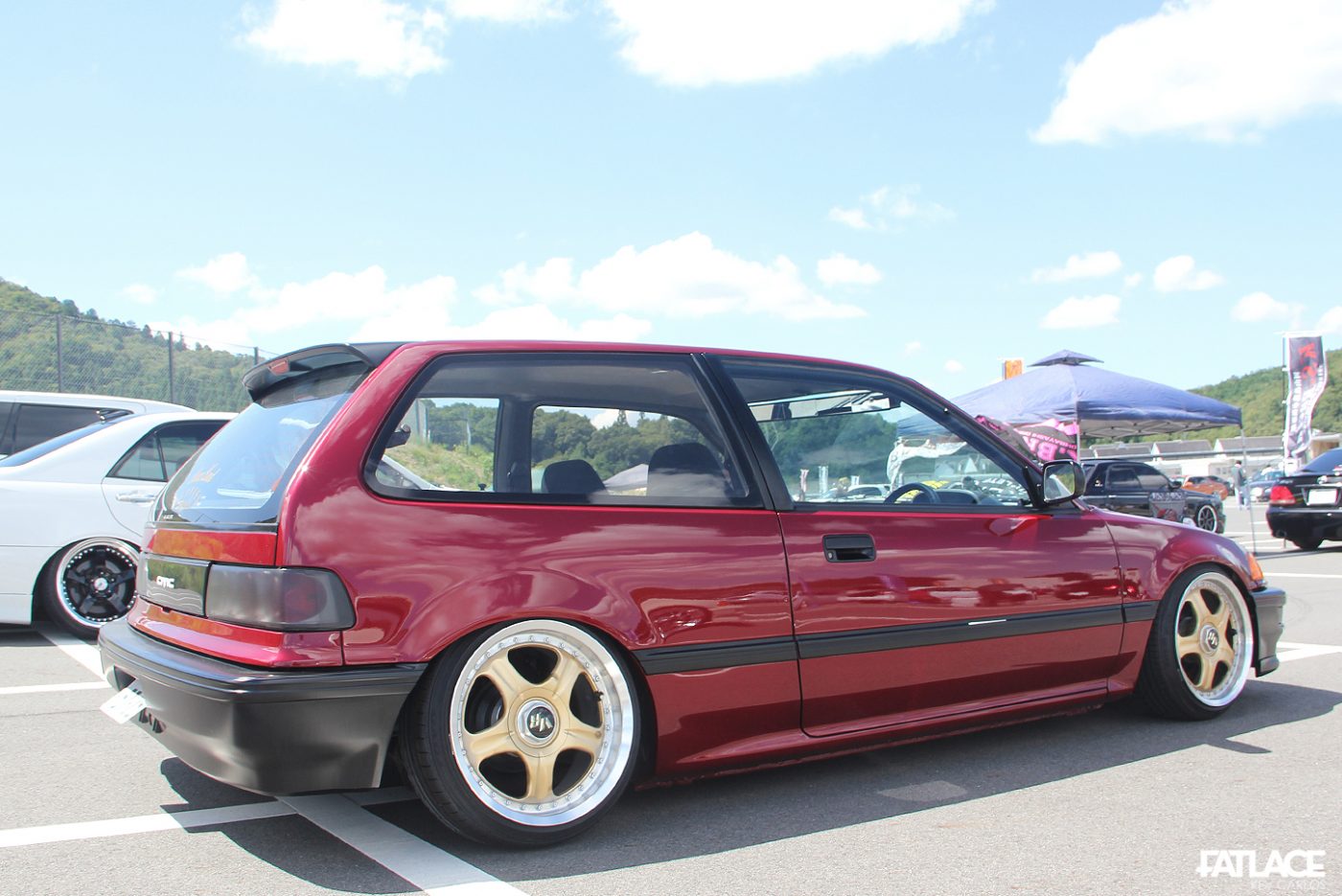 Tastefully done Honda Civic EF on Volk Racing CV Pros. Now I ask you, which category does this car land? JDM or USDM? 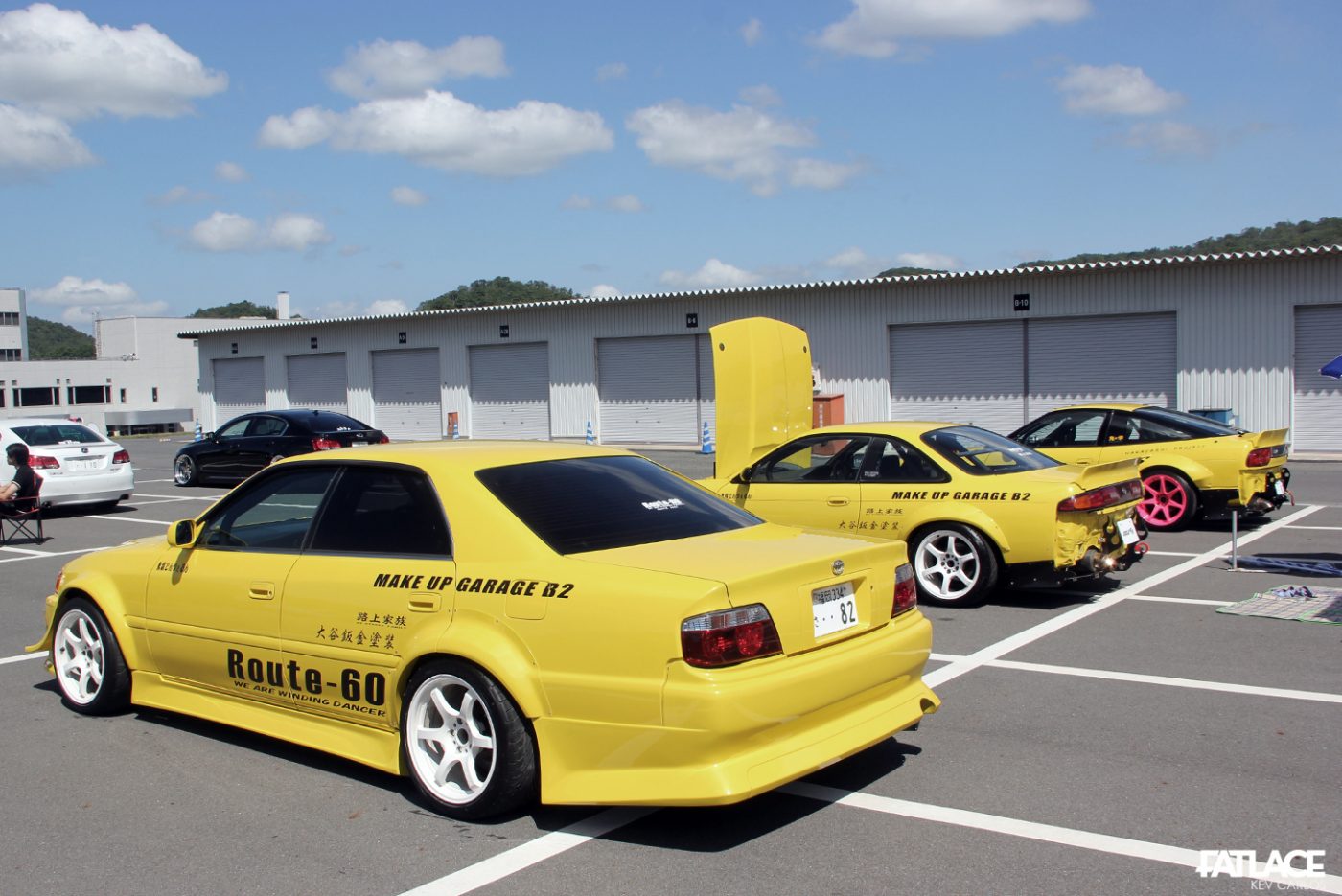 Track or race and the sun.

Being held with Motor Games Japan, track-prepped cars can also be seen during the shows. These cars are the best when they roll out as some do “basic”drift maneuvers.

Compared to the rainy 2014/2015 events this one had a temperature close to 39 – 40 degrees Celsius. With sun peaking hot during the event, less photos of possible featured cars were taken. 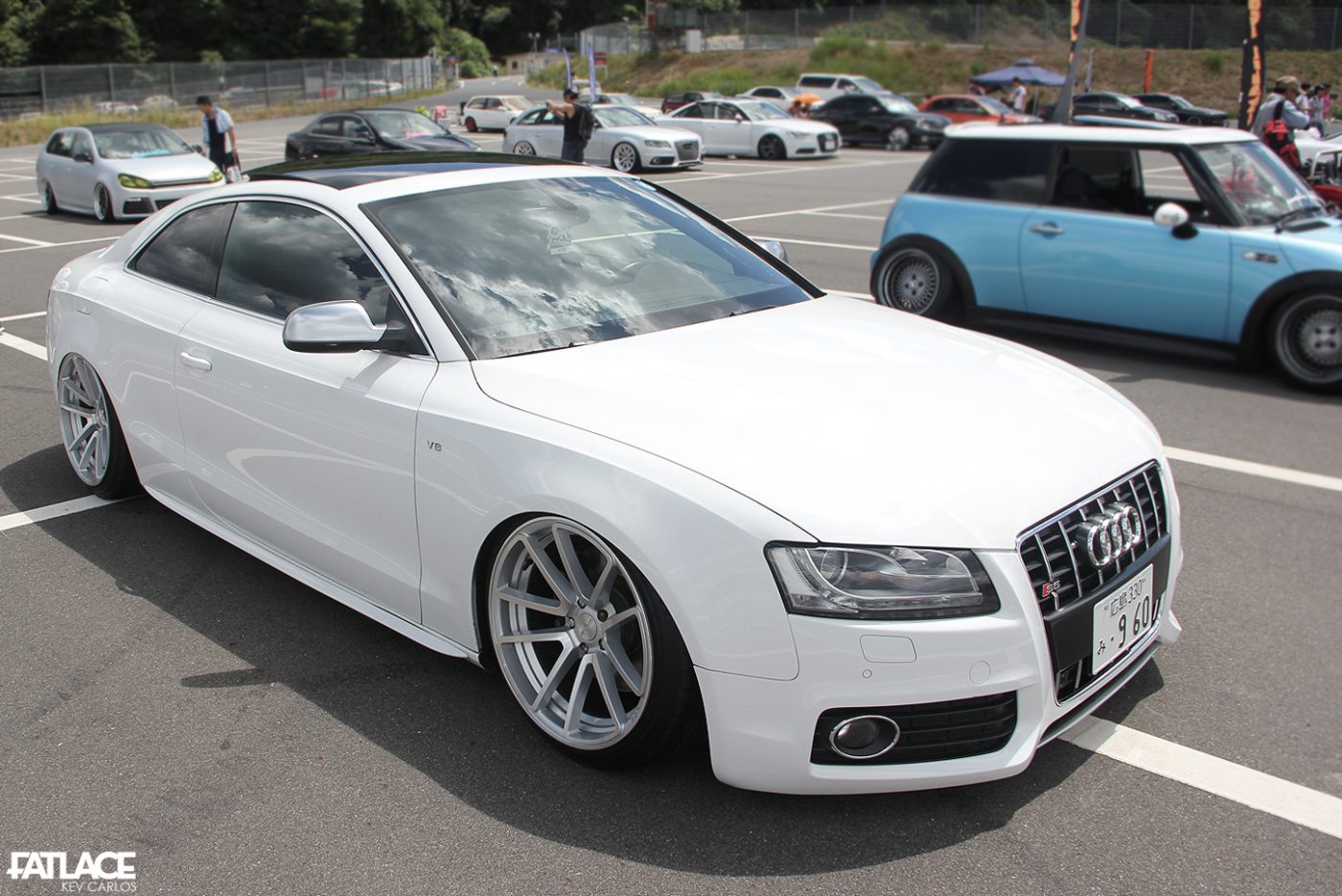 I also noticed that cars from the Osaka Prefecture are currently adopting the USDM trend and VAG styling (Volkswagen Audi Group “slang” or Volkswagen Action Gessellschaft, Volkswagen AG *added official name). Here are some landing in this category. The third place for Euro category is this Audi S5 on Rotiform SPF wheels. 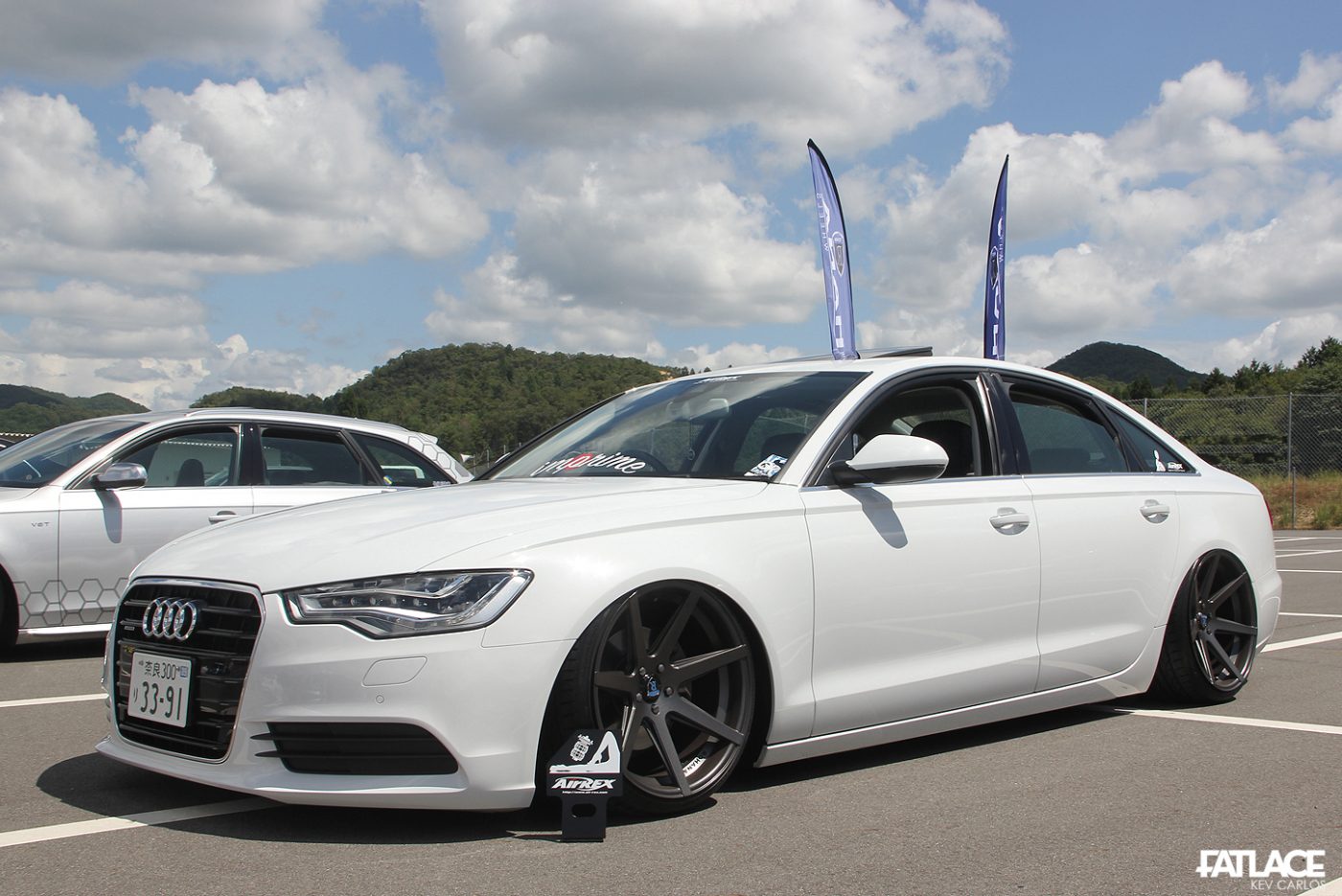 Winning third place in the Bagged Category is this A5 from AirRex. 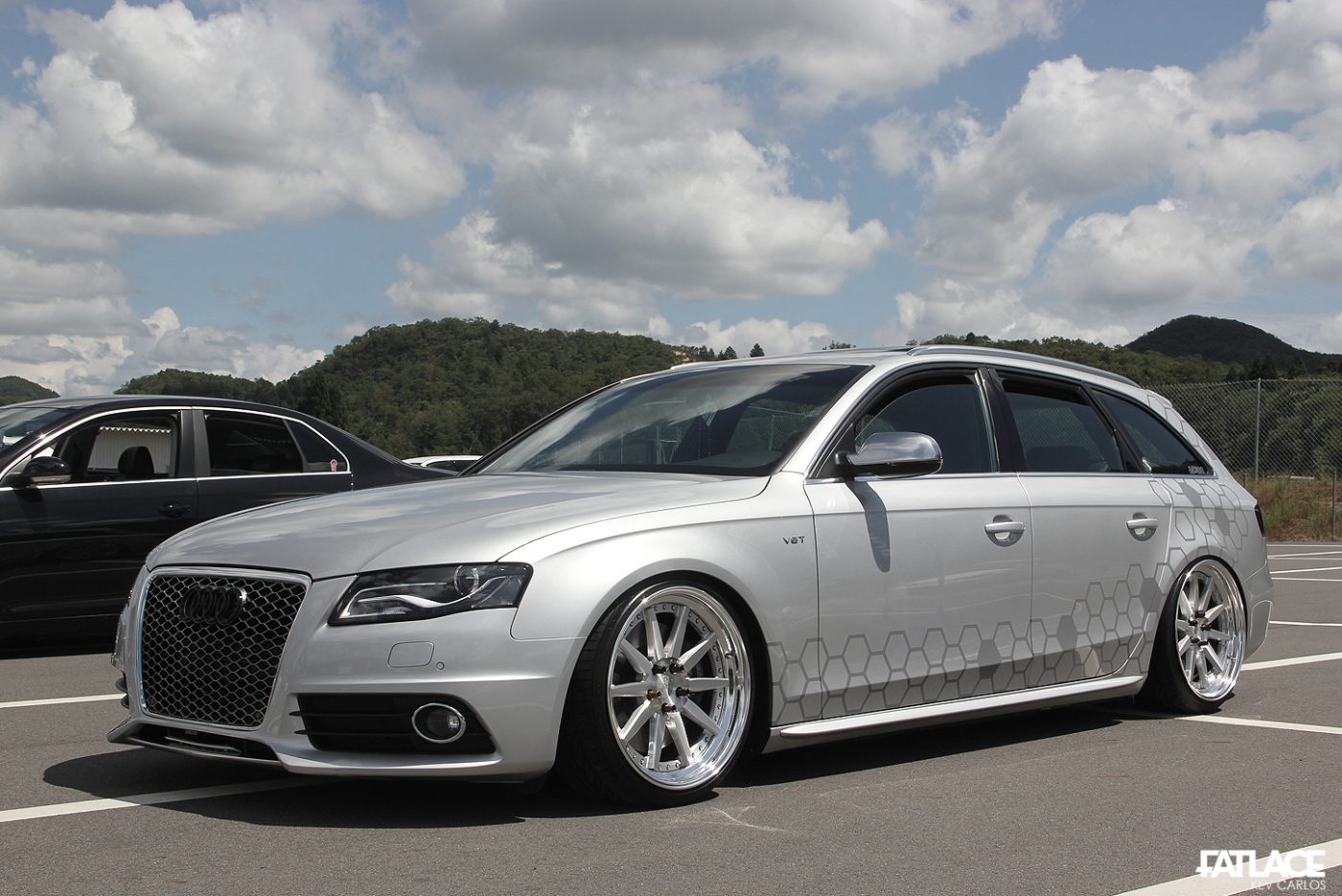 Rotiform Wheels already made its name in Japan specially in this category. During my small chat with the owners, prices of these wheels pulls off a premium. 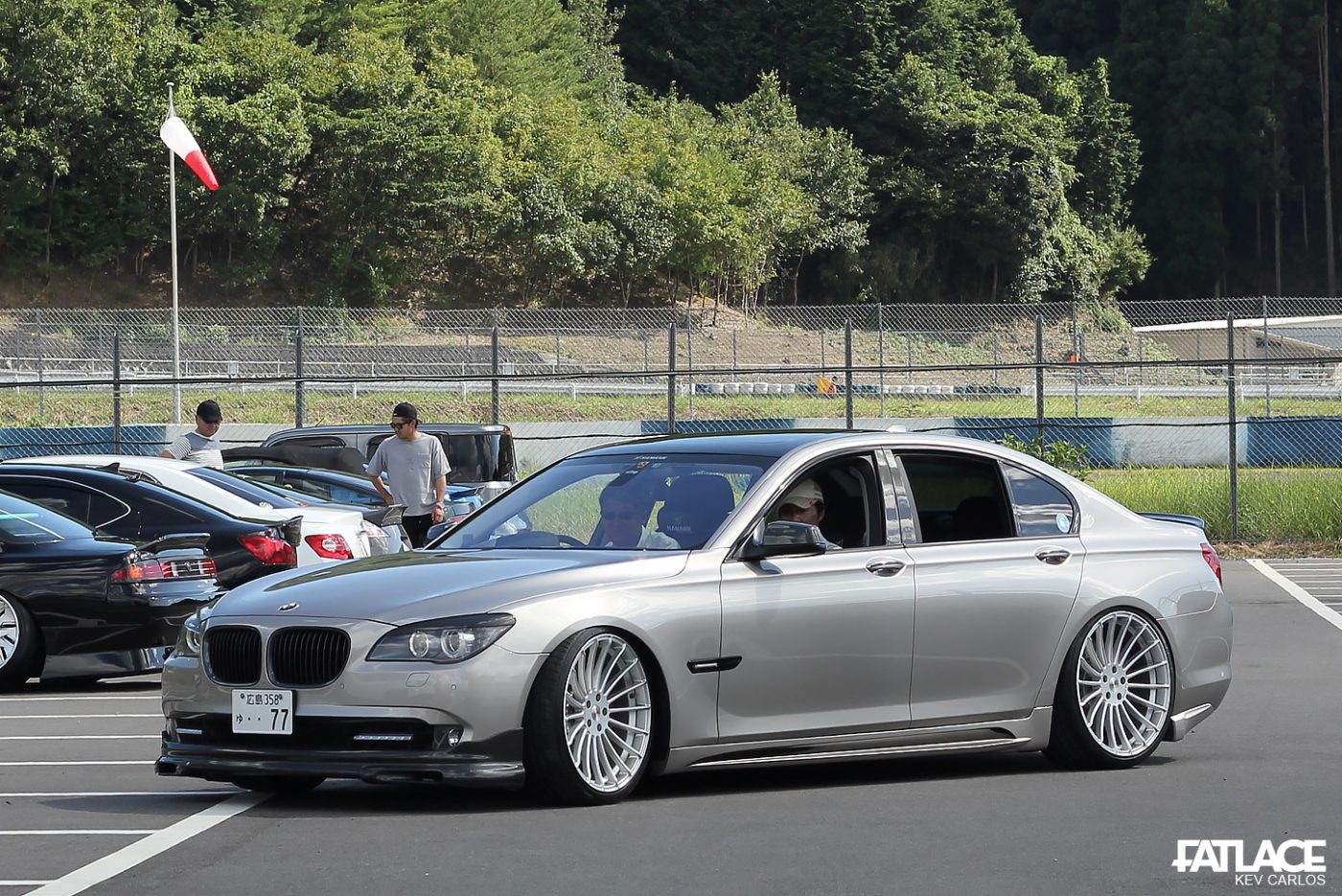 It was quite a debate if this car lands on the Bippu category, but we’ve decided to place under Euro because of the wheels used and the platform itself. This Hamann 760Li brought home the top award for the category during the show. 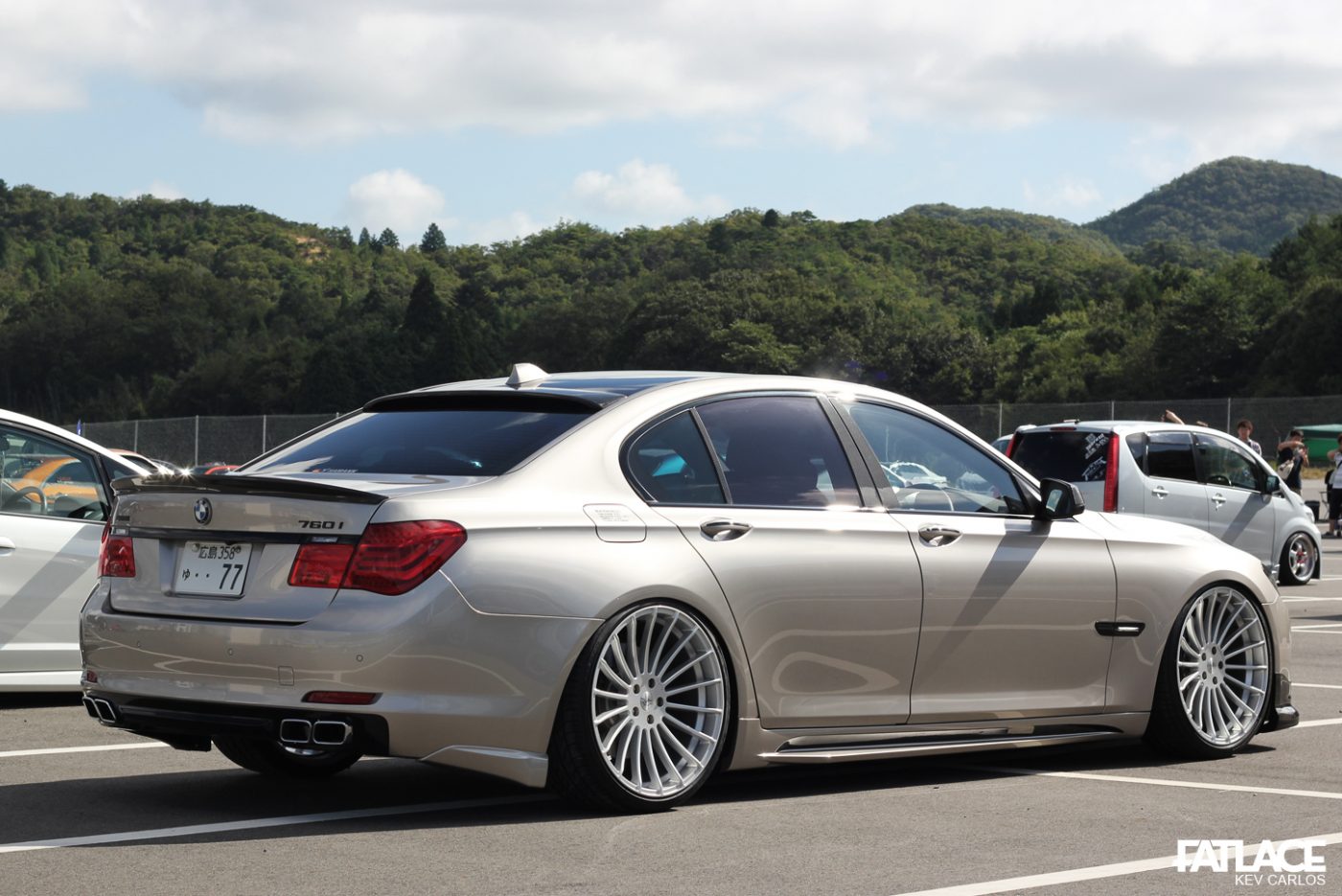 Talk about massive and commanding presence! As you can notice, I separated Bippu and vanning  from this post due to a good number of photos. 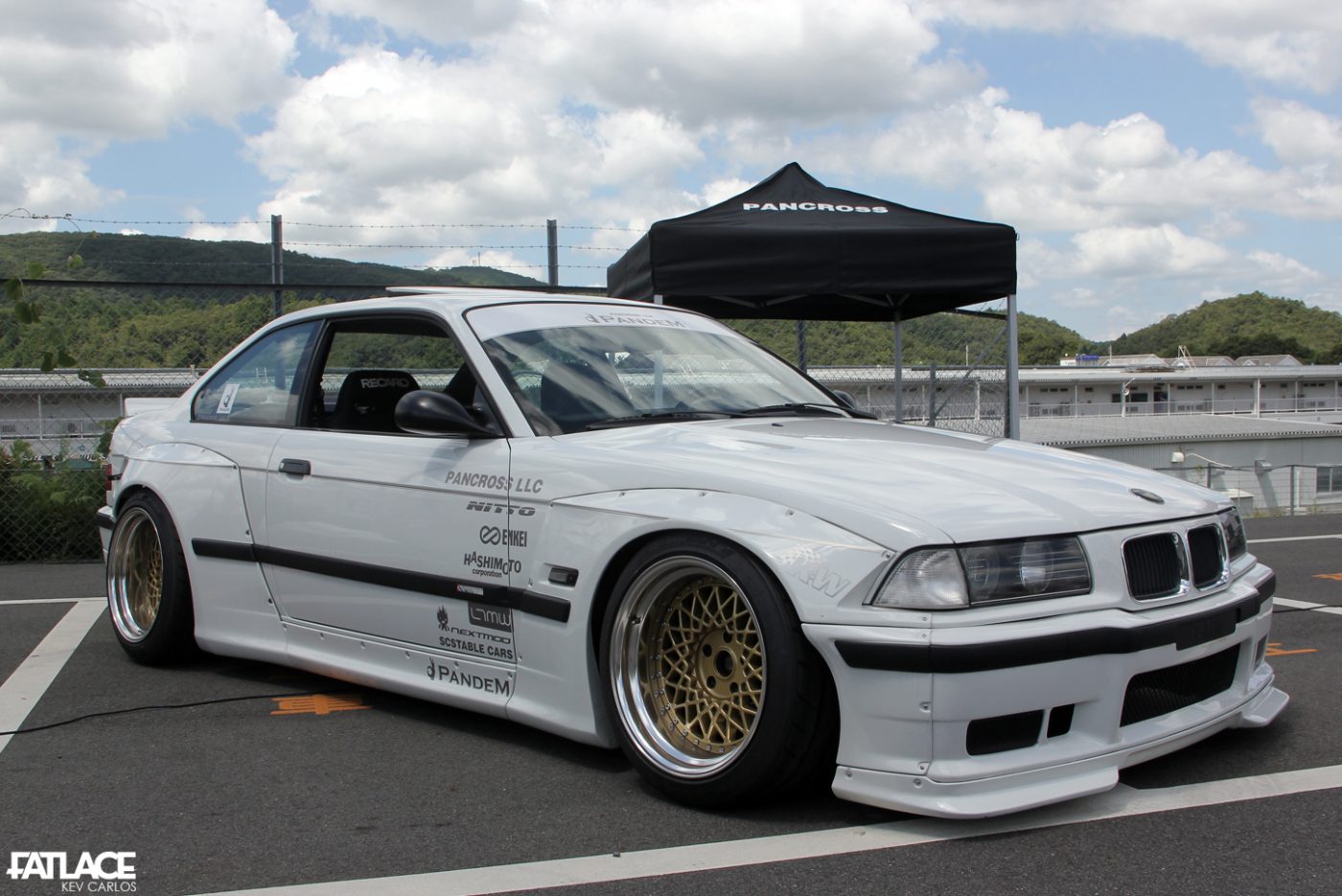 Here is a Pandem Rocket Bunny E36 on display by Pancross LLC, an official distributor of TRA Kyoto products. Being my first time to see the new kits in person, it’s quite amazing how the kit flows perfectly with OEM lines. Again, Miura-San always tops-out his build every year during SEMA or Tokyo Auto Salon. Imagination from the genius living in Kyoto will always prevail.. Watch out. Being my 3rd time to an Offset Kings show, Japanese style never fails to impress me, as it continues to evolve and inspire. With this, Fatlace shows in Japan will continuously work side by side with Japan’s very best.

Lately, I’ve been asked on why several cars seen on Hellaflush social media accounts are lacking on my coverage posts (Where’s is the red Z?). Reason for this is these features were shot one-on-one during the show  – so please do check from time to time.

For now, Offset Kings Okayama coverage is a wrap!