After having basketball (and later volleyball) consume 5+ hrs a day for the greater half of my adolescence, my affinity towards sports has always been something special. I was lucky enough to play for a handful of coaches who dedicated their lives to building championship teams, and who changed my life in the process. 5AM in the weight room. 2hr practices after school. Conditioning and shoot arounds when we were already too late for dinner. Weekends dedicated to the hardwood. It was all worth the family we found and the wins we accumulated. No amount of Hollywood magic has come close to capturing that passion, that dedication, that power… until UNDEFEATED. 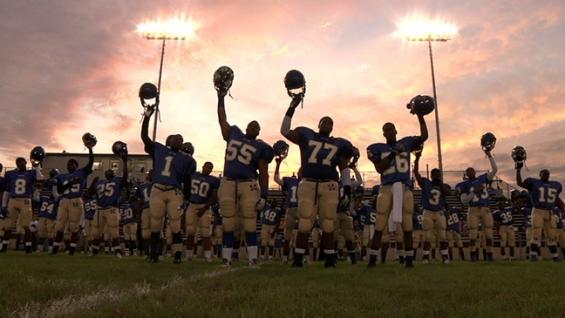 Set in the inner-city of Memphis, Undefeated chronicles the Manassas Tigers’ 2009 football season, on and off-the-field, as they strive to win the first playoff game in the high school’s 110-year history. A perennial whipping boy, in recent decades Manassas had gone so far as to sell their home games to the highest bidder, but that all changed in the spring of 2004 when Bill Courtney, a former high school football coach turned lumber salesman, volunteered to lend a hand. When he arrived, the team consisted of 17 players, some timeworn equipment and a patch of grass masquerading as a practice field. Focusing more on winning young men than football games, the football program nevertheless began resurrecting itself and, in 2009, features the most talented team Manassas has ever fielded; a team that seems poised to end the playoff jinx that has plagued the school since time immemorial. A coming-of-age documentary film, Undefeated provides audiences an intimate view of an underprivileged group of teens and their inspirational coach, as they attempt to make history.

Recently nominated for an Academy Award for Best Documentary, UNDEFEATED embodies elements of what I have always felt to be the very essence of sports: Vulnerability. Dedication. Character. Team. In many ways these are the resounding characteristics that distinguish amateur athletes from professional ones and build the premise for historical programs. These are the foundations that, unbeknownst to those outside the locker room, win championships. I haven’t felt this way about a film since CRASH absolutely floored me when it first came out. Highly recommended and hoping this takes home some hardware! For the full trailer, click here.