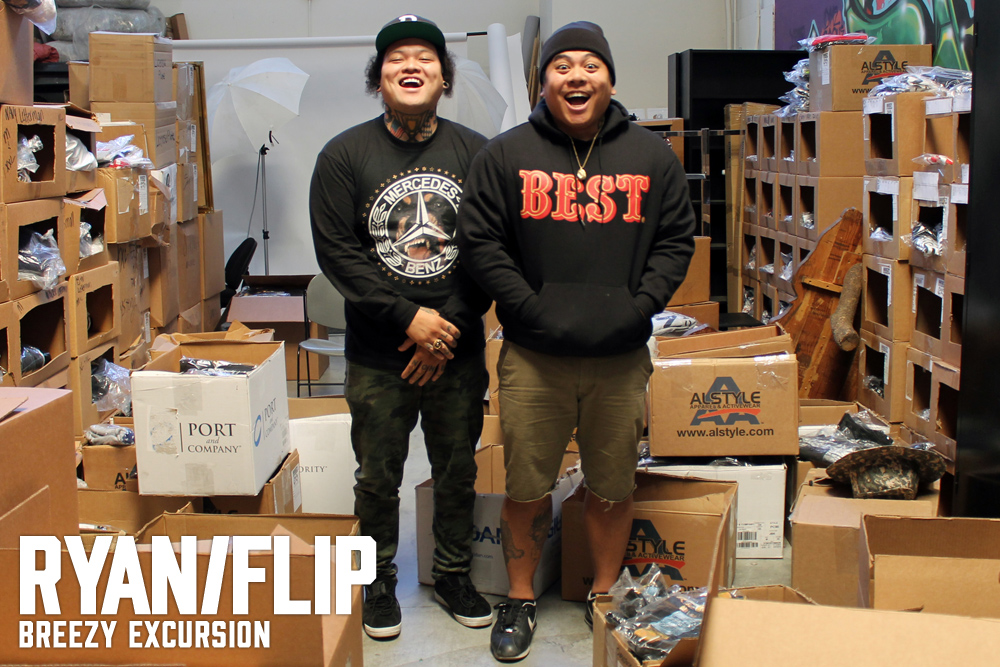 This feature was a long time coming. Our original plan was to take the tastemakers of San Jose, group them into one long article, and shine light on what was happening in streetwear up there. We gathered our own wish list of brand owners, went north, and started to work. But it didn’t quite pan out the way we wanted. Funny how things work out.

A year or so later, we were due for another trip north. Not wanting to completely wash our original idea, we reached out to Breezy Excursion by way of a mutual friend. Breezy actually wasn’t on our radar when we first made that wish list. We recently took notice of their “B” designs, and since “B” is a significant term in our lives, we wanted everything “B” branded. So we went on their web shop and Instagram, learned more about them, found out they were also from San Jose, and knew we had to connect. What was supposed to be a simple introduction of our journalistic goals turned out to be a story worth telling. Ryan and Flip are Tastemakers.

While at San Diego State University, Ryan Mante had a dream of making shirts out of solid gold. He took it as a sign, went on Microsoft Paint, and created a shirt all about Old English. It had an Old English bottle, Old English bulldog, designed in Old English font. When he was determining the right font, the sample sentence read, “We were on a whimsical breezy excursion.” That stuck. Ryan slapped Breezy Excursion on tags and woven labels and starting selling tees through MySpace.

The social network connected him to a shop in Oceanside called L&K Limited. They were Breezy’s first account. Ryan then fully committed himself by taking out a loan and being nearly homeless.

Prior to Ryan’s epiphany, he met a guy named Christian “Flip” Lilleland at SDSU. Flip would frequently throw house parties that Ryan would attend. After realizing they were both from San Jose, they became friends. When Ryan went homeless, Flip’s place became one of his crash pads. It didn’t take long for Flip to catch on to his predicament, and it also didn’t take long for him to open up his doors. But there was one condition. Ryan had to wash dishes. In his new digs, Ryan continued to do what he was doing with Breezy and Flip was in full support.

After college, they both returned to their home base. Flip landed a job with an HR company and Ryan with Google, while still hustling Breezy. The day Ryan came home, he had a full collection bagged in the trunk of his car that he didn’t want his dad to see. So he mapped out the distance between San Jose and San Francisco and immediately took those bags to 18 boutique stores along the way. Breezy gained two accounts that day – Filthy Dripped in Berkeley and Turf in San Mateo.

Around the same time, And Still in Los Angeles reached out to Ryan for a collaboration piece specific to their grand opening, and Ryan needed to make a trip down to solidify the discussion. Perfect timing – Flip was about to head to LA. They took the trip together, and Flip even accompanied Ryan to the meeting. The collaboration was in fact solidified, but Ryan needed to front the costs. In a panic, he didn’t know how to respond. Cue Flip, who negotiated the amount and terms and made it happen. Ryan couldn’t believe it, but Flip reminded him, “You only get one opportunity. I’ll front the cost; I got you.” On the way back to their hotel, Ryan had another epiphany. He realized what was missing from the brand, and it was Flip. That night, a business partnership became official. And to Ryan, that was the real birth of Breezy Excursion.

Everything propelled from that point on. Ryan was finally honest with his dad about the business and used the back area of his home for production, where they printed t-shirts during the day and burned screens at night. On the back of the labels that Ryan and Flip created together read the statement, “Fuck the rest, we the best.” It was a reminder to always push themselves, and that’s why a good chunk of their pieces say “BEST” on it.

Their marketing strategy was testament to that gusto, too. Ryan said, “We wanted to be undeniable in terms of visibility. You may not know about the brand completely but you’ve heard of us. We’re going to scream and let you hear us.” And that’s what they did. They had a radio show to promote their brand culture and they were heavily involved in events in and around the Bay Area. During trade shows, they put themselves out there without a booth to network and dialogue. Before you knew it, they were landing accounts by holding meetings at the convention center Starbucks. Their effort has proven successful. Anyone “famous” wearing their brand contacted Ryan or Flip directly; it wasn’t them who reached out. This goes for Chris Brown, TI, Wacka Flocka Flame, R. Kelly, and many others.

There’s this thing that Lady Gaga said (Ryan and Flip, don’t get mad that we quoted her) that goes, “I used to walk down the street like I was a fucking star. I want people to walk around delusional about how great they can be – and then to fight so hard for it everyday that the lie becomes the truth.” That’s Ryan and Flip in a nutshell. Between the BEST slogan, Ryan going homeless for this, Flip being a positive reinforcement for the brand and for his best friend – they have fought so hard to be where they are right now.

It is funny how things worked out for us. Our original plan to group San Jose brands together may not have happened, but we learned of two guys so genuine in their work ethic and in their relationship. Everything fell into place, much like the story of Breezy Excursion.

For Ryan and Flip’s TOP 5, we asked them the top things to know about San Jose:
1. Dionne Warwick has a song referencing San Jose called “Do You Know The Way to San Jose”.
2. San Jose is the highest populated city in the Bay Area.
3. They have the best taqueria and pho restaurants.
4. The Nathan’s hot dog eating champion, Joey Chestnut, reigns from San Jose.
5. San Jose isn’t just known for the Silicon Valley and the tech industry. Creativity extends outside of that structure, such as clothing brands.