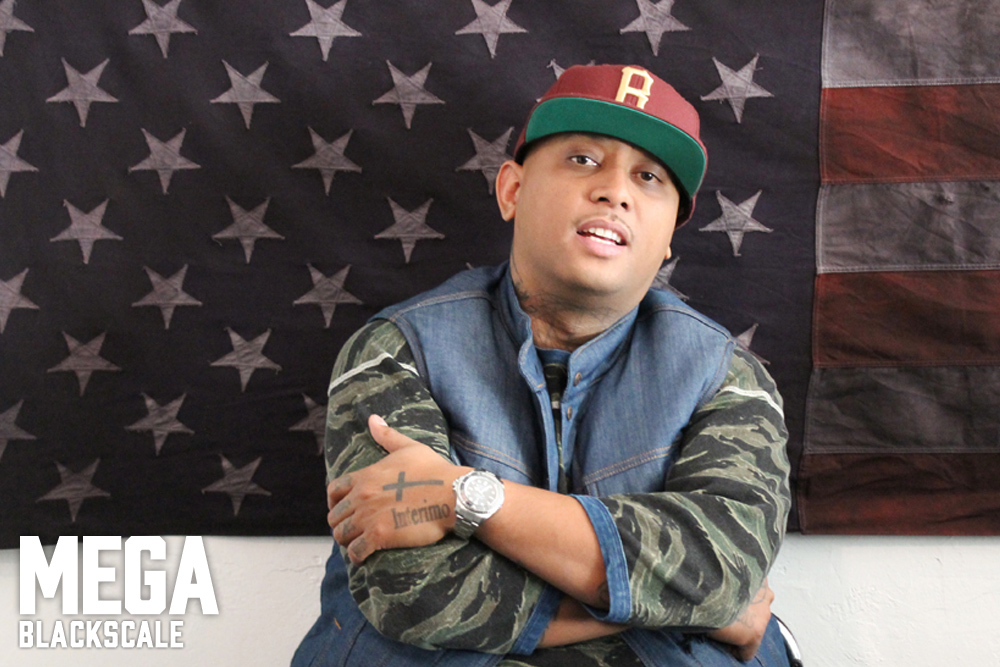 An interview with Black Scale was one we always wanted because we’re so intrigued by the brand. There is something about the imagery, the symbols, and the references that have sparked many dialogues between us. Then one night, we met the co-owner, Mega, and a little liquid courage gave us our chance to tell this story. It’s rare that Mega shares or gets personal, so when he agreed to be featured, this was our opportunity to pick his brain and get questions answered. What we thought were just images, symbols, and references were actually pieces to a very intricate and personal manuscript.

Before Black Scale started, Mega had his life in order: a high paying pharmaceutical job, a girlfriend, a supportive family, and a relationship with San Francisco’s exclusive streetwear boutique, HUF. That relationship, coupled with his love for clothing, caught the attention of the HUF staff, and they offered him a job. In true Mega rebellious form, he left the medical field and took it. When he did, everything kind of died: his girlfriend left him and his family stopped speaking to him. But as things die, things are also born.

While Mega worked as the general manager of HUF, he hired Alfred Detagle. They shared an interest in history and had the same dark beliefs. Together they saw the opportunity to create something different in streetwear. Black Scale was birthed in November 2007 when Mega and Alfred released four tees on the Blvck Elements: religion, government, identity, and death.

It was nameless at the time, with only a black satin label, and the size woven on the other side. Because of their positions at HUF, they had built extensive physical and virtual networks. Mega proudly boasts his 60k followers on MySpace, where he would blast bulletins about their brand. Their tees were sold out of the HUF store and also online using PayPal. They would run the brand after hours, sending emails late at night, and receiving replies early the next morning. Before they knew it, Keith Hufanagel (owner of HUF) told them to quit and focus on their brand full time. Black Scale is a Tastemaker.

Mega and Alfred were inspired by Nike when developing their brand. Nike would release packs of shoes in the same colorway, but each with its own story. In turn, they learned how to create a story per collection. The first season with the four Blvck Elements was about being born; the birth of the brand. The second season was only about religion, the third only about government, the fourth only about identity, and the fifth only about death. After those seasons, the brand was finally named. Everything thereafter has connected through tees, cut & sew pieces, shoes, and accessories, creating a pyramid effect. Mega compares it to a family tree, wherein the story continues and branches off at each collection. This isn’t just another brand; “Black Scale comes from a different world.”

Even the stores follow the same story. Black Scale has three locations: San Francisco, New York, Los Angeles, and a fourth one coming in Tokyo. The SF store was first. It’s white, empty, and represents birth. The NY store is historic, where the government was formed. The LA store represents identity, because most people here search and lose themselves in the city. Tokyo will represent death – the death of opening American stores. The purpose of these locations is not only to continue the Black Scale story, but to create a pentagram on the map. If you lay the map flat, the four points are shaping up to do just that.

That’s why the brand was so intriguing to us in the first place. The pentagram is a symbol widely used in Satanism, and we wanted to know if there really was a connection between Black Scale and evil. It’s known that Mega carries a Satanic bible, and many of the designs relate to Satanic imagery, so we sought answers. Mega had us skim through Anton Lavey’s bible, and it was completely different than what we thought it was. We understood it as good and bad karma, the kind of energy we radiate, and never about Satan. The imagery helps set them apart from other brands; it helps define them as dark. It also sparks dialogue – as it did with us – and controversy. That is in fact what Mega and Alfred want, for the customer to look deeper and search for interpretation.

When Mega had his first interview for Black Scale, he was asked where he saw himself in five years. His response: opening the first Black Scale store. The brand was only a year old at the time, not even named, with owners still working their nine to five, and a story just beginning to be told. Those five years have passed, and Black Scale now has three stores, a fourth one coming, a list of worldwide accounts, and an accidental women’s line that was introduced this year. The women’s line is the opposite of what we know as Black Scale. In fact it won’t even be called Black Scale. BLVVCK has its own story, told in a woman’s perspective. It will surface two seasons per year, where spring/summer are combined, and fall/winter are combined. Mega foresees the two brands battling out and maybe entwining.

Black Scale celebrated its five-year anniversary last November. It took that long for the true meaning of the brand to manifest. And now, they start all over. Does that entail Mega’s new five-year goal of opening up stores in Paris and London? Will a new story be told? Who will tell it? Whatever it is and whoever it is, we are excited to see where Black Scale goes.

Considering how dark people perceive him as, we wanted to shine a little light on his softer side. So for his TOP 5, we asked what his top 5 Disney movies were:

Go figure…they all had prominent villains in the storyline.

And here are some things that didn’t make the interview:- Mega wears color in the winter.

– Mega has theme music when he works. It’s usually jazz, or Islamic, Hindu, or Buddhist chants, or anything that sounds like he’s in a spa. The Islamic chant he listens to is actually about a man chanting for the devil to get away. Mega didn’t know that until recently.
– Mega is not so much fazed by Jay-Z wearing a Black Scale hoodie at Obama’s 2012 presidential rally; he cares more about when it was worn and how it is now part of history.
– Employees at Black Scale get a study sheet before each collection drops so that they are educated on each piece’s story.
– Mega taught us how to steal clothes from a department store: ALWAYS wear baggy clothes.