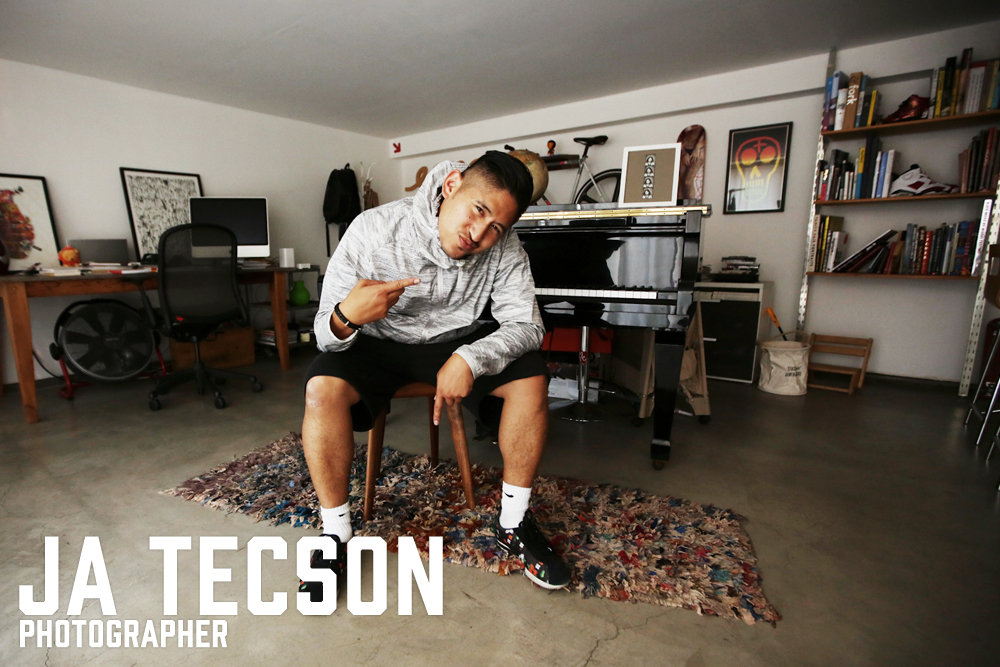 There was a time when I thought that in order to get good content for my blog I had to attend every cool party in Los Angeles. One night, I somehow made my way into Nike’s More Than Gamechangers event for the LA Destroyer varsity jacket. A building in Downtown transformed into a huge exhibit of photos and sportswear. I walked through it calculating exactly how much I had to save in order to buy one of those jackets until something stopped me in my tracks – a familiar name at the bottom of every photo on display.

It was Ja Tecson. We knew each other. He had the same friends as I did, and went to the same parties I went to, but I thought he was a wedding photographer. How did that transpire? When did that shift in industry occur? Since then, I paid a little bit more attention to his work. That was four years ago. I don’t feel the need to attend every cool party anymore; there’s other good content out there. Like his story. Ja Tecson is a Tastemaker.

For Ja, growing up either meant basketball or photography. His dad was a photographer who shot events, portraitures and editorials. Art books, magazines, models, and dialogue on why a picture was framed in a certain way were integral parts of his upbringing. As for chores, Ja and his siblings had to help proof shots, organize slides, and sequence stories into piles. Little did he know that the foundation was being set. As a senior in high school, he already had the taste for it. So he experimented more as yearbook staff equipped with an unlimited printing budget, a snapshot camera, and jock popularity. He shot anything and everything he thought was cool. It was then that he learned the challenges of not getting a shot right, but it taught him to love the craft. Even better, he relived what his dad incessantly did. He came home with tons of photos to sort through. In college, he studied multimedia. The degree wasn’t particularly focused on photography, but other communication mediums that allowed him to understand different ways of telling a story. By the time he got through with that, he was ready to go on his own.

Ja started with weddings and unpaid commercial work. The latter awarded him the experience of the journey – the testing, the trading of services, the creative control, the hustle of casting models, makeup, and stylists. The former awarded him the lessons. He knew what it meant to be thrown into a fire, to have that one-time chance, to adapt to diverse personalities and lighting, and to maximize a day’s worth of work. He continued producing for both industries, never limiting himself on who he would work with and what he would shoot, and truly honing in on his style. He finally found that and his visual confidence after five years. He knew what he loved to shoot, how to pre-visualize the idea or moment, and why creative direction was so important. He evolved into a more effective photographer; it only became a matter of time until the right person noticed.

After shooting some photos for a friend, that friend notified Ja of a Nike Vendor Fair. The fair was for up and coming artists, all looking to contribute to the brand’s culture. The invitation came at the right time; he had just returned from a solo trip to Hawaii where he materialized lifestyle work he had been imagining. It would be perfect for a presentation tailored to a brand he once considered a pipe dream. The fair was set up similar to a convention with a wall and a table to display all of his guts and glory. So he put up a mood board with a collection of pictures and let his newly revamped website run on an iMac in the background. He was scared shitless. But in one week, he got his first Nike gig. Ja’s dreams were coming true.

What happens when you get to that point? Naturally, you envision more goals. For Ja, that meant taking his career to entirely new level – a level rooted in strategy and branding. Part of that plan included a series of art shows that would take him back to Hawaii, into Las Vegas, and home in Los Angeles. They were meticulously curated, met with challenge, and full of opportunity. It was through his shows that he connected with Jeff Staple. Social media combined with the merchandising strengths of his girls at Fruition Las Vegas, brought them together. Ja has since shot Staple lookbooks, the most recent just released yesterday.

And the accomplishments kept coming in. But the one he’s most proud of is fatherhood. Baby Sky was born last year and has taught Ja about balance, time, and what it really means to shoot what you love. He’s now at a point where he’s added Urban Outfitters to his list of clientele and embracing the things he once fought in his career. He wants to own his role of a Tastemaker by refocusing on his image through more art shows (a Hawaii show at In4mation was just announced for this summer, followed by a Southern California show at the Illest store), public speaking events, and mentorship. He currently has a list of innovative projects he wants to present, an idea of developing his own magazine, and a neglected basketball hoop that’s waiting for attention. I have no doubt that he’ll jump in and thrive, just as he’s always done.

I don’t have a TOP 5 for Ja, so instead I offer you a bonus entry. A look into his creative work space posted on the Fatlace main page.