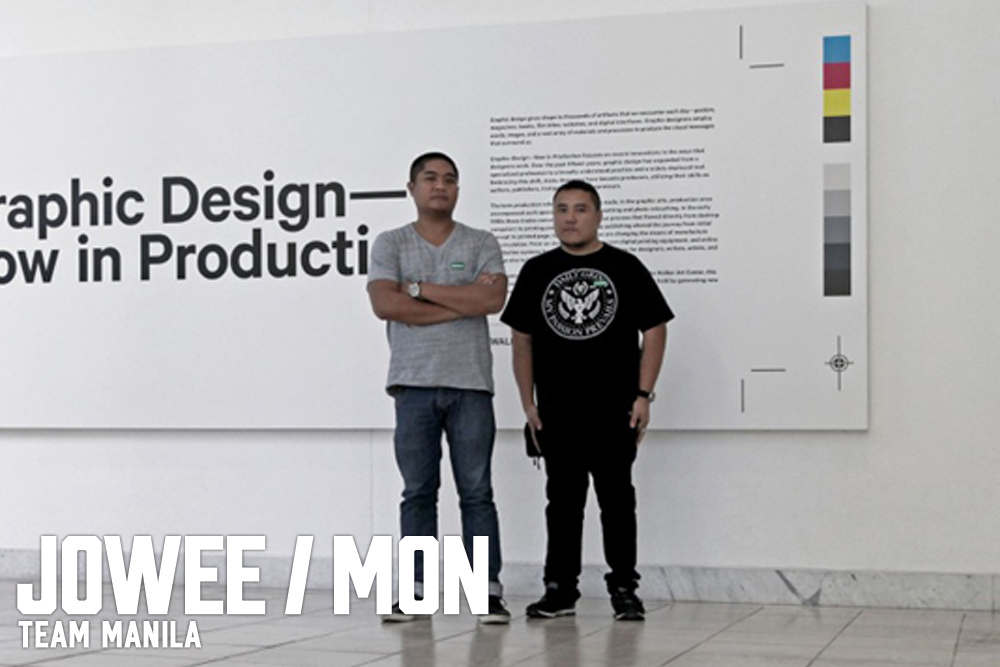 In our interview with Miss Lawn, she mentioned Team Manila when she spoke of her international expansion. She said, “You can’t leave the Philippines without buying something from Team Manila.” We can agree; when we were there, the Team Manila store became our go-to for souvenirs. But we’re not talking about magnets, or keychains, or snowlglobes; we’re talking apparel, accessories, and houseware. Their products are typography driven, streetwear influenced, done in a manner untypical of Filipino design, and meant for anyone.

That’s exactly what Team Manila wanted to achieve with their brand.  They use graphic design to tell the story of being a Filipino, to represent a culture that is often overlooked, to supply the Filipino-American with imagery that their parents may not have spoke about in narratives. And this formula has proved successful. They are considered the streetwear brand in the Philippines with ten stores deep, with online orders coming from all over the world, with collaborations in varied industries, and now with a story being told to an audience 7k miles away. Team Manila is a Tastemaker.

Owners Jowee Alviar and Mon Punzalan met in college in 1993, when they were always partnered up for group projects. They knew that something would come from the dynamic they had established, but it didn’t start right away. After college, Jowee left for California to study at Cal Arts while Mon stayed behind and got a job doing graphic design with publications like MTV Ink. When Jowee came back to the Philippines in 2001, they decided to put up their own design studio in Jowee’s parents’ garage, equipped with two computers and business cards.  Mon already had a network of clients in the music industry, so the work came in. They were doing album packaging, music videos, and party flyers. They called their studio Team Manila Design Studio.

After a year, Jowee and Mon wanted to challenge themselves with a legitimate space. They moved out of the garage and into a different location in Makati – the business district of Manila – where their corporate client list was growing with Filipino retail giants like Shoemart and Rustan’s, and brands like Nike. When they were asked to do a job for Shoemart Appliances, they realized it was time to also start doing work for themselves. So in 2005, they took their earnings from the appliance gig, and began another facet of the Team Manila Design Studio – a clothing brand. The idea was to use graphic design and t-shirts as “mediums to inspire the Philippines’ visual culture”. Their studio in Makati then became a three-part operation: graphic design upstairs, a storefront downstairs, and silkscreening in the backyard. They would buy blank t-shirts from the divisoria, print on them, and then sell them for 350 PHP (equivalent to $6USD). They called their brand Team Manila Lifestyle.

To help get the word out on their new endeavor, they would participate in urban bazaars, where local designers had a chance to showcase their product. They sold nearly 500 pieces out of a 40 sq foot space in one day. They recalled taping their shirts to the wall and being drenched in sweat from the amount of customers they had to help. They had six rows of people – ranging from teens to dads to grandfathers – waiting to purchase a Team Manila Lifestyle t-shirt. They did two bazaars, and before they knew it, they were noticed by Rockwell Center, and invited to open their own space in the facility’s independent section.

Jowee and Mon had no experience designing or building a store. After leaving the studio, they would go to Rockwell where they learned everything on the job. With the help of two other people, they built the first Team Manila store that opened in March 2006. Since then, they’ve opened nine more stores across the Philippines. Six in which are in the Manila area and three are in outside provinces.

The stores carry a diverse product range from both Team Manila Lifestyle and Daily Grind – another division in their clothing brand. While Team Manila Lifestyle maintains graphic interpretations of the imagery in the Philippines, Daily Grind is not so much locked into the Filipino culture. It tackles different subcultures, rather, like music, art, and action sports, and asks the question, “What is your daily grind?” Between the two lines, they are pushing out 80 designs every three months, with roughly 300 pieces per design. Team Manila now has a staff of 35 employees that helps run the collective operation of a design studio and two clothing lines. Yet every day, Jowee and Mon still open and close the headquarters.

Although their growth is an indication of success, there are third world challenges. The Philippines is among the poorest countries in the world, with a quarter of the population living below the poverty line. Team Manila has adjusted with lower price points and local payment options for customers without credit cards to order online or transportation to travel to stores. These challenges, however, do help promote the idea of “loving your own”, something that Jowee and Mon truly believe in. They have the Filipinos’ back, while offering products that are comparable in design and quality to Asian and American competitors.

In between designing the next season that will introduce new items like cut and sew, weaving patterns, pants, and hopefully a full women’s line, is always the goal of familiarizing Filipino culture to the world. They want to break the geographic and cultural barriers, and make the Philippines known. Jowee and Mon have a running joke that they would stop business if the Philippines got out of it’s third world status. Regardless if that happens, we hope they continue their movement.

For their TOP 5, we asked what inspires them as a clothing brand and as a design studio:
1. The Jeepney: It tells the story of a Filipino. The driver sometimes has photos of his children, or of a ship tanker because he used to be a seaman. It contains all kinds of art like typography, that comes from a mixture of influences. Their first t-shirt was also of a Jeepney.
2. Sharing: Jowee and Mon have no problem sharing the story of their progress. They don’t even have a problem sharing their contacts, with hopes that it’ll help inspire you achieve your dream.
3. Team Manila as a name: It represents where they came from and is a sense of nationalism. If Team Manila were to get credited in a publication, the name “Manila” would be there.
4. Streets of Manila and everyday Manila: There is noise, diversity, struggle, and the disparity of rich and poor. It is the texture of the city that is inspiring.
5. Collection of self help and business books.