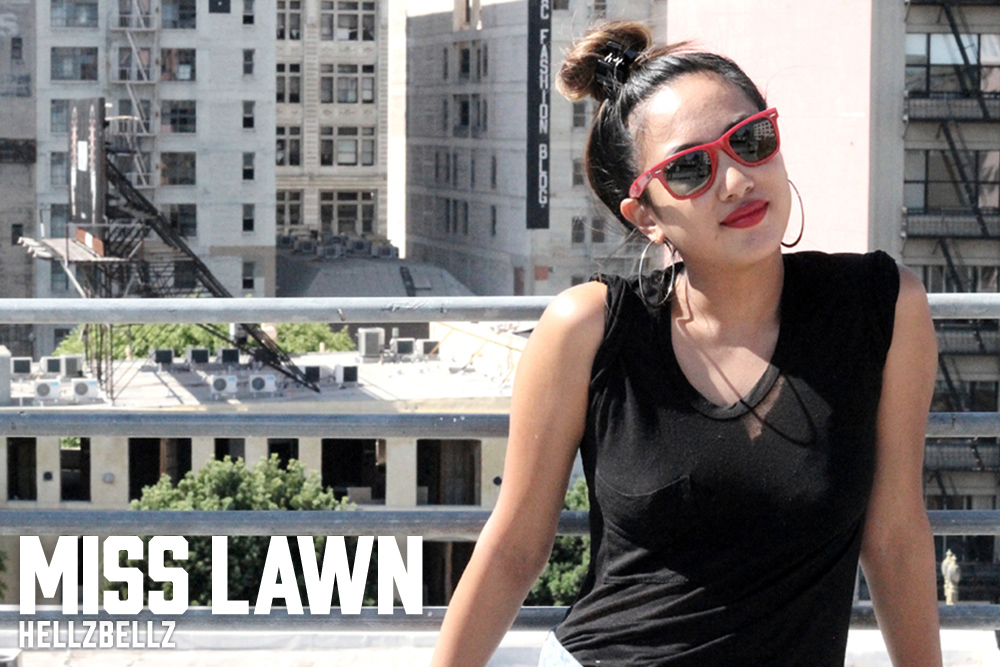 At the time, there wasn’t a clothing brand that she could associate herself with. There wasn’t anything reflective of a style she describes as “androgynous yet sexy”. For her, the solution was simple: start one herself.

Miss Lawn is the owner and designer of one of the handful of women’s streetwear brands out today. Hellz Bellz released its first line of tees in 2006, after Lawn put in her share of time in the fashion industry. She had a background in graphic design, and after working for private labels, she found herself getting off a plane in New York City and straight into an interview with Ecko Red. With luggage in hand, she arrived at the office only to find out that the lady she was supposed to meet with had left for China. For a month.

For that month, she passed around her resume and eventually landed a position at Triple 5 Soul where she was the ladies graphic designer for about a year. During her time there, the brand began to transition and to Lawn, it wasn’t keeping with its street essence. Instead, sales were dictating the line. Case in point, she was asked to create a graphic with a sailor on it that read “I <3 Seamen”. She refused to do it, an intern did it anyway, and she saw that as time for her to peace out.

She then took her talent to Rocawear for the next three years. During her second year, Lawn considered herself the worst employee. She would take left over fabrics from the office, and at lunchtime, would get samples done for a personal project she was working on. By her third year, that personal project took off, and she could no longer juggle the two. Hellz Bellz was born in New York, out of a need to fill a void in women’s fashion, created by a graphic designer courageous enough to go against the grain. Miss Lawn is a Tastemaker

Lawn attributes some of Hellz’ success to a mixture of perfect timing and organic relationships. Streetwear was booming in 2006, with sites like Hypebeast and High Snobiety popping up in the blogosphere, and stores like Commonwealth and 5 & A Dime popping up in retail. Hellz Bellz got love early on, with features being written on Lawn, and stockists carrying the product. The collaborations she secured then followed suit. She’s done a capsule collection with Stussy, shoes with Vans (wherein she designed the shoes), bags with Matahari, and didn’t have to approach any of them. They all materialized because of existing friendships.

Her in-your-face, cutting edge design style was refreshing in a male dominated industry. It was so unheard of that even after Hellz launched, people would approach Lawn’s partner, Bam, and ask him if he was the one really designing the clothes. Lawn prides herself in that role, the hands on business owner that can create tees, techpacks, and marketing plans with the best of them. She is truly about the craft and the message of strong females coming together and kicking ass.

Season after season, Hellz continues to stay true to its spirit. Lawn doesn’t get influenced by other brands or by trends, but rather the streets and every day people. In a time where stores like H&M and Forever 21 mass produce designs and sell them for cheap, Lawn maintains a sense of individuality through timeless, quality made clothes. She proudly says that she has had a pair of pants for the past four years.

Although she admittedly says that some of her clothes haven’t changed, streetwear has. Women’s streetwear programs suffered because of the economy, driving Lawn to create something to keep her relevant. She wanted to be placed in women’s boutique stores and did so earlier this year with the Belle of the Brawl (BOTB) collection – a more mature line, meant for the Hellz Bellz girl that grew up. In a way, it’s a reflection of who Lawn is now. But that doesn’t mean she’s neglected the younger girls who seem to be fueling a resurgence of women’s streetwear. She says, “Hellz is coming back hard”, and tells us to expect more from the brand very soon.

Lawn now works out of Downtown Los Angeles, and doesn’t have much spare time. She’s designing for Hellz, BOTB, and sometimes for her partner’s brand, GPPR. She’s finalizing collaborations with Black Scale, Sanrio, and another one with Matahari. She’s also forecasting her expansion to the Philippines.

We asked Lawn what advice she’d give to someone trying to follow her footsteps. She said, “be fearless”, which pretty much sums up her story. She only had a graphic design background, went to New York not knowing what to expect, created a brand with designs she liked, and developed a business sense along the way. She learned by doing, and now has two well respected clothing brands that make us ask if this is really a man’s world.

And here’s some things that didn’t make it to the interview:
– Lawn’s specialty is Chicken Adobo. She even won a contest for it, and refuses to disclose her recipe with us. It’s that serious.
– She wants to attend magic school to become a magician. She told us a story about Kat Williams lookalike magician at the Magic Castle in Hollywood whose grand finale was pulling a big white cat out of his shirt. Lawn, in genuine awe, dropped to the ground, screaming. If you ever catch us, ask us to play the audio of the interview just to hear Lawn tell it herself.
– She may or may not have a Rocawear jumpsuit with a bedazzled ass that she occasionally wears on weekends. Hellz yeah!
– She’s a bookworm, has a book club to prove it, and loves gut-wrenching stories that make you want to rip your heart out.
– She’s claustrophobic, and is always looking for the nearest exit.
– Her dream collaborations are with Dr. Martens and Vivienne Westwood.
– That day, she was inspired by waking up and appreciating life.