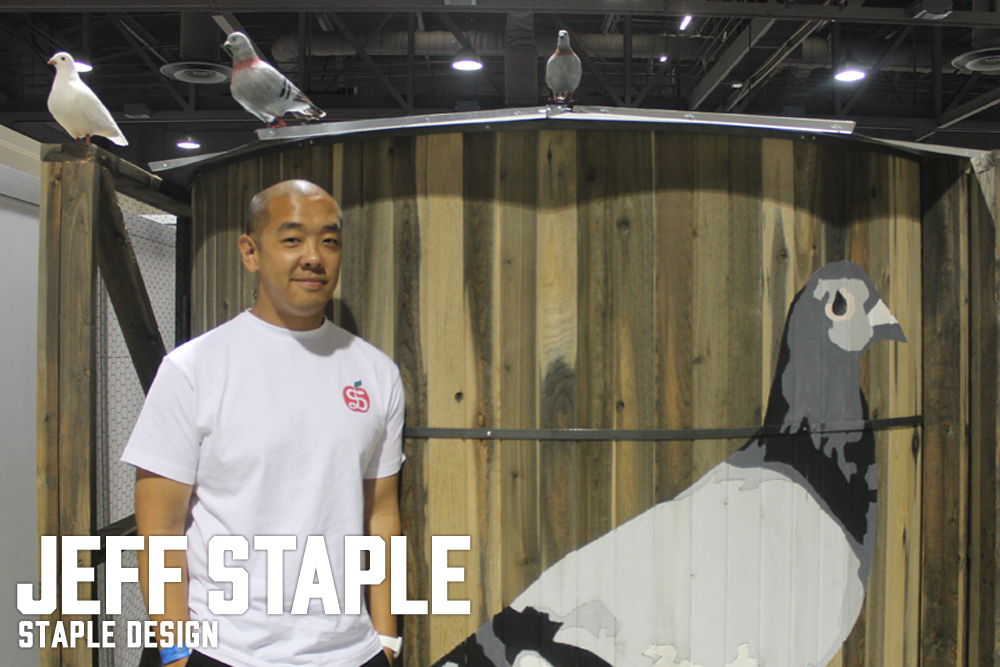 Talk about being at the right place at the right time. It was the second and final day of Agenda (2012) when we wanted to photograph the Staple booth, and jeffstaple happened to be there. After the photo opportunity and dialogue about his booth that was appropriately transformed into a pigeon’s coop, we landed an interview.

jeffstaple is owner of the three level company that is Staple Design. It includes a men’s clothing collection, a creative direction agency, and the retail store, Reed Space, in the Lower East Side of New York City. Reed Space has most recently hosted events for Futura, Hennessy, John Mayer, and Odd Future. And to add to all that, Reed Space has its own print publication called Reed Pages, released quarterly and distributed globally. jeffstaple is a Tastemaker.

He didn’t think he’d be any of that. It took him working since 12 with job descriptions ranging from salon worker to pizza delivery boy, from one-hour photo developer to rollerblade salesman slash teacher. It took two times to drop out of college as a journalism major and a design major. It took an accident, a DIY t-shirt, and a shopping trip to SoHo 15 years ago to get to this point.

It was his birthday in 1997, when he walked into the Triple 5 Soul store wearing a t-shirt he designed and printed. It was a heavy handed, political design with slave shackles on the front and the words “Never Forget” on the back. The owner of the store took notice of it, approached Jeff, proposed the sale of a dozen tees, and they all sold. Simply put, that’s how it began.

Staple Design started with just t-shirts, and then became a design studio where he and his team work on product for Staple and other companies. Somewhere in between, cut and sew pieces were introduced into the clothing line. Soon after, Reed Space opened, which is often regarded as one of the world’s best and most innovative stores. And then Reed Pages launched, the magazine that Jeff calls his passion project. Each facet of Staple Design complements the other, kind of like a full circle operation. With all that he’s created in 15 years, though, he’s most proud of the team he has assembled.

To Jeff, things still haven’t skyrocketed for him. He compares Staple Design to sword making – a day-by-day, constant shaping process. Even after the release of the highly coveted Pigeon Dunks that required both the NYPD and the Swat Team, or even after the Beats by Dre headphones that took two years to develop from the ground up, or even after the other collaboration projects with names like Timberland, Kid Robot, and Microsoft, he’s still hammering away at that one sword. In fact, it took him this long to make Staple pristine enough to show at Agenda; it was the brand’s first time there.

So what’s next for Jeff? He will release another set of themed Instagram photo books, a series of YouTube videos on food in New York, and a new restaurant. In the future, he’d like to collaborate with NASA and invite the youth to think further.

One of the questions we looked forward to asking him was why the pigeon. We now know why. The pigeon embodies jeffstaple. By his definition, it symbolizes living in New York, an animal that doesn’t take any abuse or shit, an independent survivor that can exist everywhere.

Jeff told us that he has a collection of shoes that’s numbered in the 600s. So for his TOP 5, we asked what his favorite shoes are. They are (in no particular order):
1. Adidas Boat Shoes (grape scented)
2. Air Jordan 1
3. Nike Presto
4. Jack Purcell
5. Cole Haan Hamilton

To switch things up, we also have a TOP 5 list that we compiled on things you may not know about jeffstaple. We really wanted to add this info into the feature, so here you go.

– It was one year after Staple started when Jeff saw a random person on the street wearing a Staple sweatshirt. Jeff went up to him and said, “That’s a cool sweatshirt, who made it?” The random guy responded, “Didn’t you?” Needless to say, he was pretty embarrassed. And from then on, he doesn’t question, but instead compliments.

– He doesn’t wear his own stuff. He is a consumer, and would rather buy other clothing to give back to the economy. It’s almost like pay it forward, because he believes he gets that money back when people shop at Reed Space.
– He considers Fatburger to be the best burger in the nation.
– He only kept one pair of Pigeon Dunks, and even plays basketball in them. (For anyone asking if a second pair will be released, Jeff has requested that you be patient, because he is not a wizard.)
– On that day, he was inspired by a game of ping-pong against someone else in the industry. It was good that they were able to set aside business and just have fun.