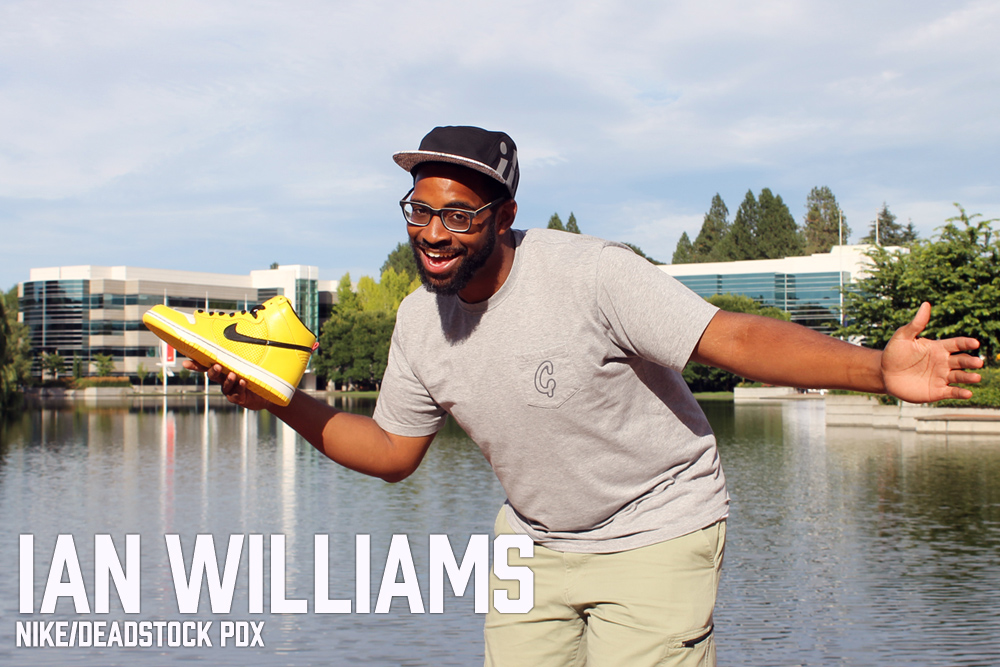 When I started my conversation with Ian Williams, Footwear Developer at Nike and founder of Deadstock PDX, I didn’t believe anything he said. Upon meeting him, I found him facetious. He had jokes, he said what’s up to nearly everyone on campus, and his smile was huge. So when I asked how he got to where he is and he answered, “as a janitor”, I was like yeah right.

I don’t think I’ve ever bit my tongue more than I did at that moment.

Ian started at Nike 9 years ago as a seasonal associate at the Employee Store. Although his tenure was short, he realized that he was where he wanted to be.  So when his run came to an end, he did what anyone would do. Look for another job… at Nike.  He landed a temp position a few months later, this time manufacturing the air bags that go in your shoes. But it wasn’t satisfying; his personality was overshadowed by a factory environment filled with people he couldn’t connect with.  He was bored and sought for something else, until he found an open janitor position at the Nike Headquarters in Beaverton. While most of us would ignore something like that, he saw it as his in. And in fact it was.

Ian Williams is a Tastemaker.

Ian’s theory was this: janitorial work would take place at night when everyone was wrapping up work and eager to talk about anything but that. Perfect; he was more than capable of discussing other things. He knew that in no time they’d be his friends and they’d have his back. After three and half years, the theory was proven. A combination of dialogue, positioning, and a little thing called the Custodian Pack allowed for his progression into footwear development. Ian fostered friendships in every building he was assigned to, particularly in Tiger Woods where Nike SB was located. He met Shawn Baravetto – Nike SB Product Line Manager – whom he connected with over sneakers. Ian found himself there more and more, just shooting the shit with the SB guys. Then one day, he approached Shawn and said this, “Look dude, you should let me do a shoe. You should let me do a pack.” He replied, “Yeah, yeah, go ahead.” So in three days, he crash coursed Abobe Illustrator, modified line art he pulled from Nike Talk, worked on a deck, and presented the Custodian Pack.

There were three in the pack, each shoe representing an element of janitorial work. The first was inspired by Windex. A Dunk Low using terrycloth material, designed with a clear Swoosh, iced blue outsole, and subtle hits of red. SB thought they would have problems with that one. Next was an ode to the vacuum, which implemented real carpet from the Mia Hamm building. Ian used colors like blue and grey – the colors of his actual vacuum – and orange for the extension cord it was always plugged into. SB thought that one was ugly as hell. The final shoe was based on a wet floor sign. Designed as a Dunk Hi, it had patent yellow leather to resemble a shiny floor and a black contrast along the midsole. There was supposed to be the word “Caution” on the heel and the slippery symbol on the back, but those features didn’t make the cut when SB released the Wet Floor Dunk Hi (internally referred as “Ian’s Shoe”) to retailers. Ian was still a janitor.

But people started taking him more seriously. He even got a desk to work from. Although not part of a specific Nike division, he would contribute anywhere he was allowed. He did the marketing plan for the ID Studio on campus, more color work for SB, and all for free. He’d sit at that desk every day from 9-3, doing what he could. Then from 3-9, he was out washing windows and cleaning floors. This went on until someone in footwear development left. Ian interviewed for the position and finally became official. He is now an integral part of what’s called a triad – marketing, design, and development. He ensures that the product is as close to how it was originally envisioned.

While all of this was happening, Ian was cultivating his passion for shoes in another manner. He started a company called Greater Than Good where he produced sneaker events in the Portland area. It was a platform for likeminded people to get together in a social setting – basically an opportunity to wear shoes around people who actually cared. Because for Ian, the sneaker culture had changed. The camaraderie that stems from new releases had become lost and needed to be brought back. The quest began with events and then with sneaker art sales. He updated Greater Than Good’s online presence to include a store that sold pieces from various local artists. But it took awhile for both business models to gain traction, and Ian was itching for the next step. He knew there was something bigger than what he was already doing.

He started with the idea of a Greater Than Good creative meeting space, but he was worried about how he could keep the doors open. Then food came into play. He thought a food truck could serve as a mobile center for collaboration, but he knew that would take too long to get off the ground. So he kept thinking. And got it. He knew that crazy things materialize when you meet with your friends over a cup of coffee. You can catch up, you can do business, you can run an interview, you can even use it as a pre-game spot. He didn’t know much about the coffee culture, but he did know about galleries and sneakers. Why not put them together? It was mash up quirky enough for Portland and synonymous with the city itself.

Ian calls it Deadstock PDX, and it aims to operate halftime as a local coffee and sandwich spot, and halftime as a sneaker gallery. The goal to revive the camaraderie over shoes is still there, but this time with a twist. He’s already garnered the mentorship of the Portland Development Commission and the Dapper & Wise Coffee Shop. He’s also got the cosign from his Nike friends like Tinker Hatfield and former employee D’Wayne Edwards (now founder of Pensole University) who will spearhead a series of sneaker design courses in the future Deadstock PDX location. Ian is now calling on the rest of us to help bring this to fruition; his Kickstarter campaign just launched a couple of weeks ago.

I no longer find Ian facetious. I find him inspiring more than anything. He’s got a solid track record of owning every idea he’s put into the universe. He thought that being a janitor could lead to a fulltime gig at Nike and it did. He thought that he was capable of designing a shoe and he was. Now he has an idea to bring coffee and sneakers together in one modular space. With the endless possibilities that can provide, Deadstock PDX is bigger than what he’s done. At the rate he goes, I’m pretty sure it will happen. Good luck.